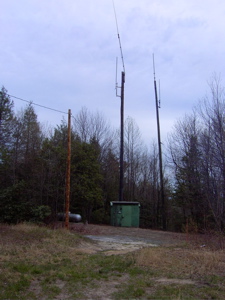 Worst. Highpoint. Ever. Sassafras Mountain was the first of three southeastern highpoints in three days. I live in Connecticut. I am a “liberal elite,” whatever that means. I’m literate, I’m in a hurry, I don’t like NASCAR, and Chick-Fil-A drive-thru is not, “a night out on the town.” I could not live happily in South Carolina (or any number of southern states) for many reasons. That said, I’m also a firm believer that the cliche about southerners being a good deal nicer than us Yankees is 100% true; with the caveat that I happen to be a Caucasian man. My non-Caucasian wife needed some convincing.

The fine folks at Dollar Rent-A-Car saw it fit to “upgrade” me to a Chrysler Concorde. This car was about twice as big as I’m used to and completely unnecessary, but I couldn’t really argue (especially when, 3 days and 2 fender benders later — not my fault — they didn’t care) and the Texas license plate gave me a comfort level tooling around the back roads of the South. After spending a night in Atlanta with my aunt and uncle, we gathered our gear, loaded up on coffee and headed towards the SC highpoint. 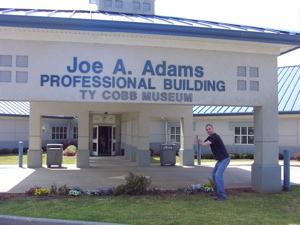 I’m often accused of not being spontaneous enough, but when I saw a billboard advertising the Ty Cobb museum in Royston, his childhood hometown, I made the rash decision to check it out. Now, I’m certainly no baseball fan, so my reasons for going were not exactly the typical ones. We were in rural northeastern Georgia; confederate flags were everywhere and Ty Cobb was known to be a bit hotheaded and racist. I was curious to see if they acknowledged any of that here. Royston is a very small, rural, typical southern town… except that everything is named after Ty Cobb. The Ty Cobb museum, on Ty Cobb Way, in some Healthcare building, looked small and it was six bucks I didn’t care to spend on some ancient baseball player. I’m sure it was lovely though.

It took some acclimation to realize the distances on the Georgia map represented a lot longer drives than we’re used to in New England. Just getting back to the highway took too long — portents of things to come. Once back on Interstate 85 East, we quickly reached South Carolina… Which looked the same as Georgia. I figured a quick jaunt up to Pickens with a short detour east to check out “Beverly Hills, SC” would be pretty funny. It wasn’t. It was tedious, ugly, and boring, but now at least we can say we were at the famous intersection of Hollywood and Vine… in South Goshdarn Carolina. 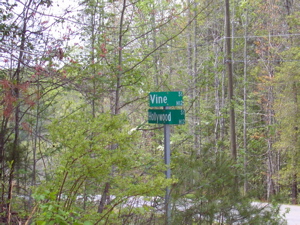 After a few wrong turns (due to very poor signage) my frustration level increased. Sure, driving through Pumpkintown only added to our jaded view of the state, but I don’t make wrong turns, so this was really starting to bother me. Once on the way to the highpoint access road, we just wanted to get there and be on short hike. Route 178 to Rocky Bottom, SC is insane. We’ve driven a lot of crazy/dangerous roads; the world famous Route 19 north of Hilo, HI, the road up Mauna Kea, the road up to Paradise at Rainier, the road to Hana, the Pyrenees, the Alps, and I-95 though the Bronx, to name a few. Let me tell you – this road is one of the worst. Never before have I seen so many sharp switchbacks and high banked curves – now I know why so many NASCAR drivers come from this part of the country – if you grow up driving these roads, you become a good driver! 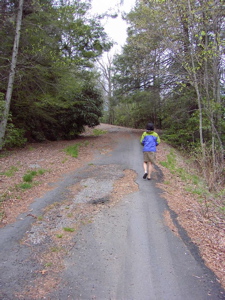 Just as striking was the poverty level along the way. Ramshackle shacks and broken down cars in yards were the norm. We passed “Bob’s Place,” which was a bar (I think) that has to be seen to be believed. It looked like a movie set fake bar thing from the Civil War era, replete with a few shirtless/toothless men looking under the hood of a pickup in the dirt lot. I would have stopped in for a beer (Bud, no doubt), but Hoang wasn’t hip to the idea. I can’t say I blame her — in fact, as much as I would have loved to have taken a picture, I must admit I was a bit afraid of any repercussions.

From the highpointing site, America’s Roof: “Just up the road from Rocky Bottoms we stopped at Bob’s Bar which was a postcard waiting to happen. The bar on the edge of a creek had stone base and rough hewn timbers and no running water! The proprietor of more than 40 years came out on the porch to chat (every conversation we had in these parts always seemed to start inside a building and wind up sitting on rocking chairs on porches). Everybody had hound dogs. “ 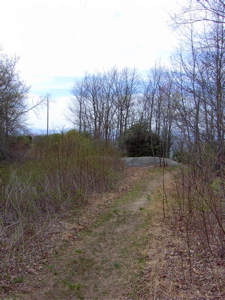 We initially missed the turn off to Mt. Sassafras so we drove the insane road a few miles more than we needed to, into North Carolina. Hoang was not happy, and neither was I. Perhaps if the highpoint was worth it, it would have been ok, but we both knew it would not be. We righted ourselves, passed the Rocky Bottom Camp for the blind (with mini golf!), and finally got to the lot near the top. We then set out on the 200-yard walk to the top.

The day was sunny… Until we got to our destination. It was as if Mother Nature said, “Hey, y’know what? This highpoint is such crap that even if there were views, I’m going to limit them with cloud cover, just to irk you even more.” The crumbly asphalt trail to the top is in disrepair. The litter on the short trail isn’t even interesting. And then, at last… The summit. Ugh. Some concrete, windowless structures, a bunch of rusty old radio towers, a litter strewn fire pit, and no views whatsoever. I’m sure there are plenty of pretty areas in South Carolina, but Mt. Sassafras sure isn’t one of them. I was in the spirit of the locals’ fashion and accessory-wise, but Hoang just wanted to get to the hotel back in Georgia. This state doesn’t even put the benchmark at the true summit (not that my home state of Connecticut does any better). 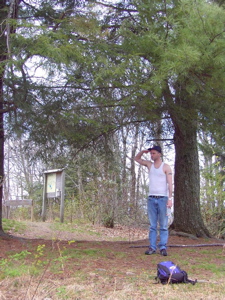 I poked around the area, checked out a rock 20 yards away, snapped some shots (more to show the ugliness of the place, rather than anything else) and prepared to descend to the car. After my quick walk to “the rock,” Hoang was nowhere to be found, as she had already had enough of this dump. I found her a couple minutes later back at the car with a scowl on her face.

“Ok, ok, we go now. No stops, no detours, just as quick as I can to Hiawassee, Georgia,” I told her, as if Hiawassee, Georgia was some sort of incentive for her. Amazingly, my navigational screw-ups were not yet over, as I missed a couple more turns, thanks to more very poor route markings. This did allow us to see some marquees we wouldn’t have otherwise. Now, I understand the South is a bit different from New England, but some of their dietary choices are a bit disturbing… 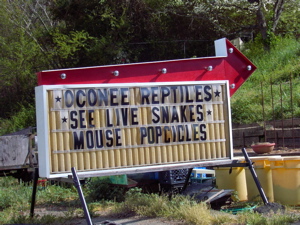 Just as disturbing is their refusal to admit that the Civil War ended 140 years ago… Below is an example of one town’s (Walhalla) ode to the old south. Ok, the Confederate flag is standard, and the little park setting was quaint. But the stone marker referring to the gallant fight for “State’s Rights” and the remembrance of “what they stood for” kind of threw me. “States Rights” is simply code for “slavery” and I refuse to celebrate anything to do with that. 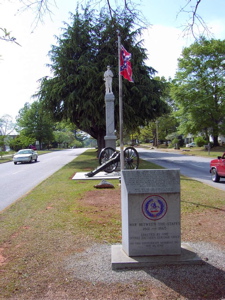 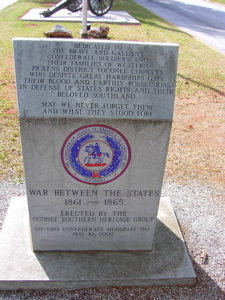 We finally crossed into Georgia and drove through some very pretty scenery on our way to Hiawassee. (Cue “Dueling Banjos). We crossed over the Chattooga River, site of James Dickey’s Deliverance tale. We also crossed the Appalachian Trail just outside of town and got to the Holiday Inn just fine. There were a few AT hikers staying there and it was refreshing to chat with them a bit. We walked next door for dinner and were waited on a gay black guy in his 20’s. Needless to say, we were shocked… We felt obligated to “save” him from a life in Deliverance-ville, but kept our mouths shut, gave him a way-too-big pity tip and retired for the evening staring out our window up at the Brasstown Bald tower, which we would be hiking to in 12 hours.

So far, Hoang didn’t talk to a single person other than me all day, so she still had no say on whether Southerners are “nicer” or not. At least at this point we knew their state highpoints weren’t. 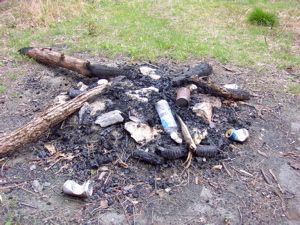 Continue on to next highpoint (Georgia)
Main Highpointing Page