This website depends mightily on pictures. Even though they are generally terrible, they give those who just scan these long-winded posts something to look at, I actually use them to frame the story. Since I hardly ever take notes and many months usually pass between visits and postings, the pictures remind me of what I saw and read. 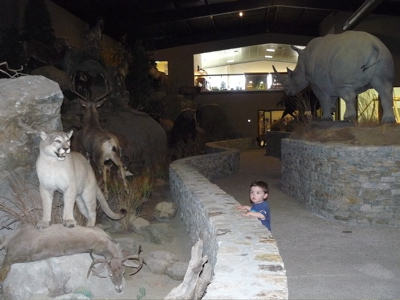 I always remember to charge my batteries before a day out. And if Hoang and Damian are joining, Hoang usually brings her (far superior) camera and (far superior) skills along as well. As this would be a really cool visit and a large place AND the beginning of my second hundred museum visits… The pictures this time were going to be awesome.

So what are the chances that BOTH of our camera batteries would die at the SAME TIME during our visit to Goshen’s Action Wildlife Foundation? Ridiculous, to say the least. And so, as a result, you’ll get a shorter story than you’d have gotten otherwise but less cute pictures of Damian interacting with various grassland beasts. Life is a series of tradeoffs, no? 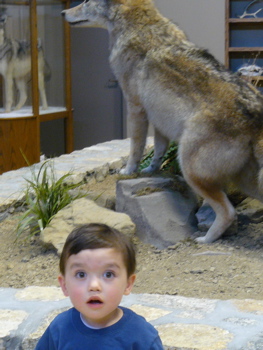 I’d driven past Action Wildlife a few times before and always thought it was some sort of sad antiquated roadside freakish zoo-like attraction. I’m happy to say I was wrong. This place is vibrant and clean and unique and the animals seem very well-cared for and have plenty of room to roam. Dare I say, the beasts here seemed pretty darn happy. 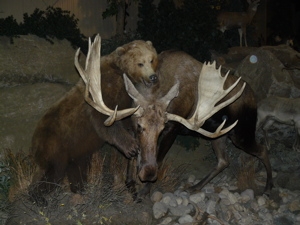 In fact, I just read this on their website:

A veterinarian technician is on site 40 hours per week to feed, exercise and care for the general over-all health of the animals. All animals are vaccinated according to FDA regulations and individual attention is given to the specific types of food fed to different animals. There are over 10 different types of grain and feed mixtures available, so knowing the diet for one animal and how it differs from the diet for the next animal, makes feeding time a critical part of each day. 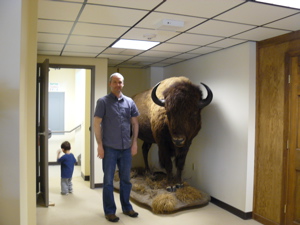 As I read their site, it really does appear they have gotten it right. Formerly a dairy farm set on 116 acres of land, the transformation into Action Wildlife is the result of one man’s impetus and entrepreneurial spirit – Jim Mazzarelli. Mr. Mazzarelli began preparing the land about 8 years ago so that exotic animals from around the world could survive and prosper in Goshen. The animals that are selected to join the cast at Action Wildlife easily adapt to varying extremes in climate and landscape. Several breeds of animals have the capability to develop thicker coats during the colder months and then revert to thinner coats during the warmer months. Those animals with thinner coats are sheltered in a barn throughout the colder New England winter months. 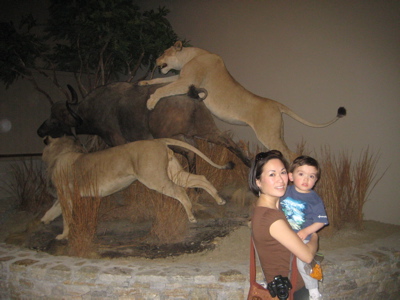 Before we toured the outdoor areas, we entered the museum gallery first. Officially named the Museum and Exploration Center, this two level area contains easily the best and coolest taxidermy display in the state. (It opened in the spring of 2008, just before our visit.) The building is open year round as opposed to the Drive-Thru Safari, so you can get your Action Wildlife fix any time of the year now.

I won’t pretend to be able to accurately name all the various animals on display here. Just know that there are a lot. The main room seems to span the globe of predatory beasts and large game animals. Lions and tigers and bears are just the tip of the iceberg. Happily, the curator seems to have an affinity for bears equal to my own. Furthermore, bears attacking giant prey seem to be at every turn. I love that. 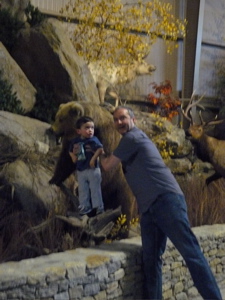 The overall feel of the huge room is impressive to say the least. Here, in Goshen (of all places), I felt like I was at a Disney attraction (with no animatronics) or something similar. The animals are preserved impeccably and Damian may have even thought that rhino was really bumrushing him. The “real” fake waterfalls were a cool added touch as well. 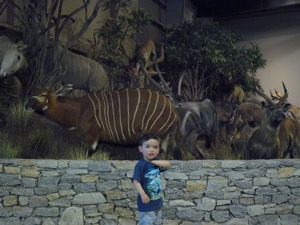 It was at this point that Hoang noticed her camera was near its end. We continued to a smaller room which focused on our local Connecticut wildlife. “In Connecticut’s Backyard,” while not as professionally presented, it was still pretty darn cool. 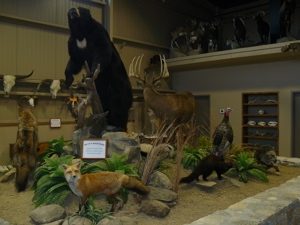 That is a BIG black bear

Almost hidden away here was a series of displays with crazy nature facts on them. Here’s an unresearched sampling – hey, I have no reason to question these things:

An ostrich’s eye is bigger than its brain.
Butterflies taste with their feet.
Dolphins sleep with one eye open.
A snail breathes through its foot.
Beavers can hold their breath for 45 minutes.
The bullfrog is the only animal that never sleeps.
The color of yak’s milk is pink.
A group of frogs is called an army. 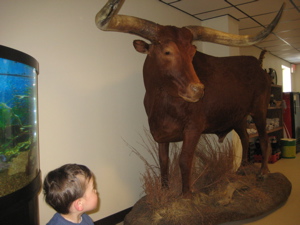 All cool facts… The only one I find hard to believe is the bullfrog/sleep one. I just poked around the Intertubes and never really found a satisfactory answer. They estivate. They “rest” deeply but apparently don’t “sleep” like humans sleep. 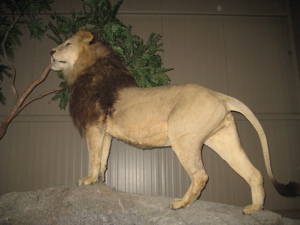 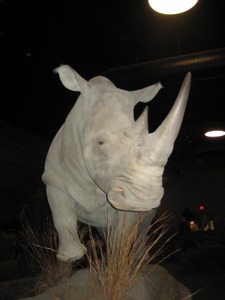 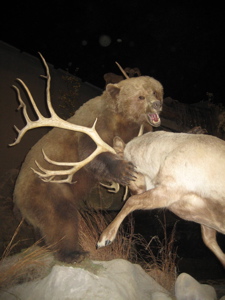 We walked back through the African-Alaskan taxidermy room, through the well-stocked gift shop and up the stairs to the live animals area. This smallish room overlooking the larger one below contains parrots, ferrets, and a whole host of lizards and snakes. Damian rather enjoyed this room (he prefers live animals to stuffed anyday) and we spent far too much time there. For the boy, of course. 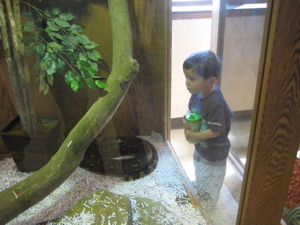 This was also the time when I realized that MY camera was dying as well. I tried to keep it together, but I couldn’t help it; I was mad at my lack of foresight. With so much left to see outside, I was positively bummed. 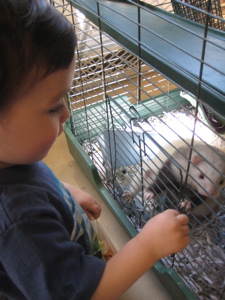 We forged on. Once outside, Damian decided to have a series of difficult tantrums, so conditions weren’t ideal for pictures anyway. We hopped in the car for the zoo experience. Here, at Action Wildlife, visitors drive the route on their own terms and may stop and tarry about at their whim. I loved that aspect of the place. 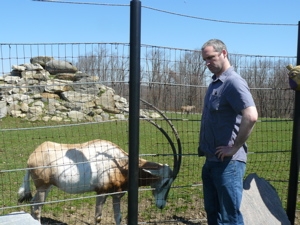 There are a ton of animals out here, on the grassy hills of Goshen. The first highlight for us (Damian was still a pill at this point) were the ibexes. These goats are excellent climbers, who get to enjoy the rock mountain erected specifically with them in mind. They even have a generator-powered waterfall which keeps the water from becoming stagnant. Lucky ibexes.

There were rheas and all sorts of plains animals. I won’t even begin to list them all – and even if I did, they are constantly changing here. Some of the more exotic creatures are: American Elk, Aoudad, Belted Galloway, Fainting Goat, Japanese Sika Deer, Nilgai, Scimitar Oryx, Zebra and Zebu. 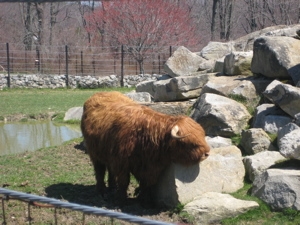 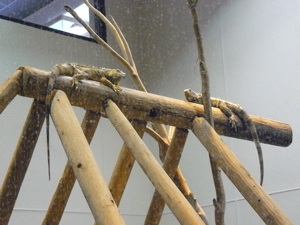 I challenge YOU to attach names to the pictures we were able to take. Ha! As if having the name “oryx” weren’t cool enough, you get to be a “Scimitar oryx?!” You just know those guys walk around Africa like they own the place. And rightly so.

The outdoor drivable zoo area is a lot of fun. With all the cool exotic species roaming around, it was the miniature horses that got Damian recharged again for some reason. He snapped out of it and took right to that horse, allowing it to lick his hand and arm. He just doesn’t care, that Damian. 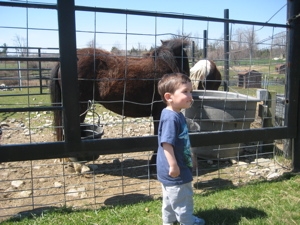 Back in the car, we drove around the brand new (in 2008) “Drive-Thru Safari.” Unfortunately for us, it was so brand new that it was barely stocked with any animals yet. I think we only saw some rheas in there… But it was still neat to drive around and imagine what it would be like in the future (which, of course, is now when you’re reading this).

When I snapped this picture from the road… 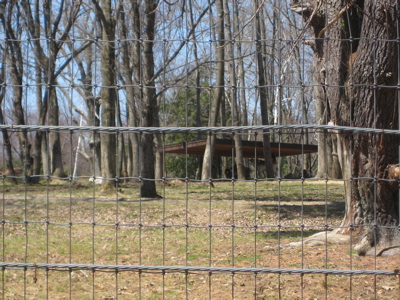 … I joked to Hoang that it looked like Philip Johnson’s Glass House from afar. A modernist retreat for the wildlife. She just stared at me. 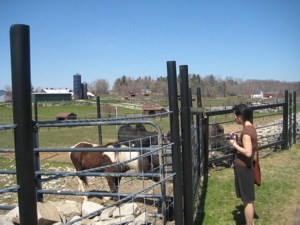 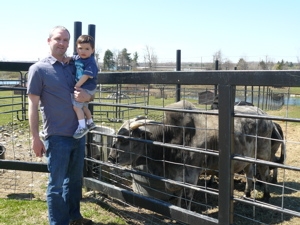 We thought we were done, but then realized there was an entire petting zoo/barn area left to explore. Damian LOVES this stuff, so now I was truly upset about our dually dead cameras. I was able to squeeze off a few last shots, but none of Damian feeding the baby goats. Pure, unadulterated joy! He gained some fans who kept giving him more goat food to feed the goats and ironically, several other parents were taking pictures of OUR handsome boy because he was being so darn cute. 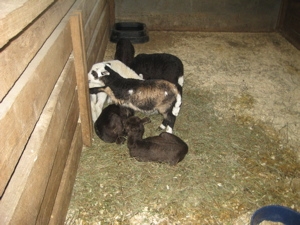 And yet, we stood there with our dead cameras limply around our necks. Sigh.

There is also a large play area for kids here and plenty of picnic tables as well. Both Hoang and I were really impressed with Action Wildlife (and neither of us are zoo fans) and enjoyed it far more than we thought we would. 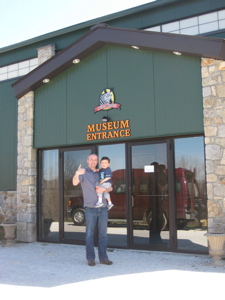