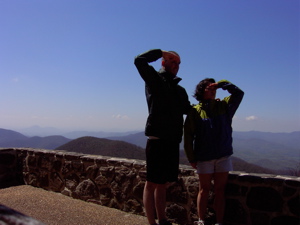 The day dawned sunny and beautiful… A perfect day for a hike in northern Georgia. Even more exciting was the view from our hotel window: The summit tower of the highpoint several miles to the southeast. We jumped from bed for joy, gobbled up the continental breakfast, and hit the road around 9AM. With only two roads to navigate, we made no wrong turns and parked the behemoth Chrysler at the trailhead at the bottom of the mountain. With the temperature around 72 and bright sun shining, we began the pleasant hike up the Bald. Why would we even think of driving up it?

Several mountains in the southern Appalachians are called, “Balds,” because their summits are devoid of any vegetation other than grasses. What’s weird about this one is that the summit had plenty of trees, which, of course, makes no sense. (Several balds further north are more classically “bald”). Science has yet to determine why these summits are lacking trees and shrubs, but some think it’s due to something the Native Americans did way back when. My beautiful wife was once again initially peeved that she was hiking up a mountain for dubious reasons on a lovely Thursday in April in a state she never thought she’d visit, but that would soon change. 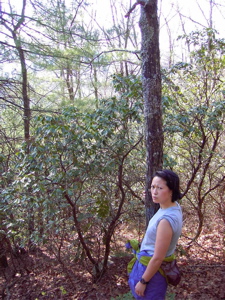 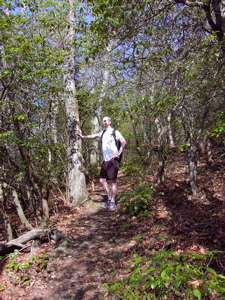 You see how happy she is?!

As I alluded, this is one of those mountains one could simply drive up almost to the summit. But, as with NJ, MA, DE, NH, and VT, I decided a hike would make the experience much better. And I was definitely right. The blue-blazed trail was pleasant, shaded, graded, free of rocks, and offered nice views all the way up. For highpointers who don’t want to bother with the difficulties of Mt. Washington or Mt. Mansfield, I would still convince them that hiking Brasstown Bald is worthwhile on a nice day as it has plenty of switchbacks and soft trail. 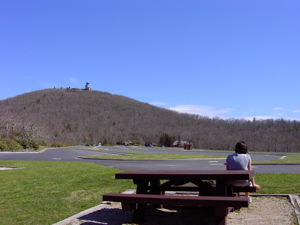 In fact, Hoang’s demeanor changed drastically as she actually began enjoying herself on the climb. At one point, and I’m not making this up, she exclaimed, “I love it!” I guess the key is to have perfect weather, good health, good fitting shoes, not too long, not too steep, no rocks, not too early in the day, a delightful breeze, a summit with views, no headache…

Once on the ridgeline near the parking lot for those who drive up, there is a long flat section of hiking… During one quiet moment, we heard some spooky clanging from an indeterminate location. It sounded as if the banging was coming from inside the mountain! We decided we were nuts and pressed onward. 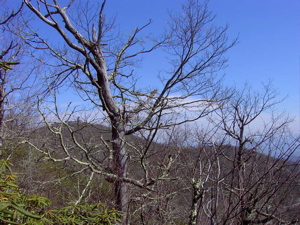 There is a view of the summit through the trees at this point, which becomes a little disheartening when the trail immediately descends a couple hundred feet (meaning we’d have to climb up that on the way “down”) but all in all, it’s an easy hike. The parking lot is huge and on this weekday in April, there were only 2 or 3 cars there in total. After a short rest at a picnic table, we crossed the lot to the paved trail up to the summit. There was one obese lady who emerged from a minivan, who emitted beeps as she backed out, I swear. The funny part was that she had some hiking poles and was wearing hiking boots. “Good for her,” we thought, “Good for her.” 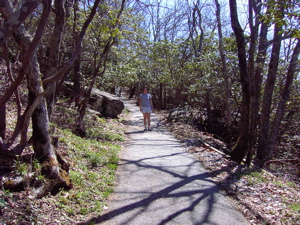 Hoang and I began the final ascent (there is a $2 shuttle that will take the people like the aforementioned lady to the top) which was really quite steep. It was maybe 1/2 mile long and despite the switchbacks, I can’t really imagine a wheelchair bound person making it up, not that they’d try. After about 2 minutes on the trail, Hoang decided to work on her quads and glutes… Which somehow meant walking backwards. “How cute,” I thought, “Ain’t no thang.”

She soon passed me as my legs were burning with lactic acid more than on any other hike in my life. I’m talking real pain! I’m sure we looked stupid, but we only passed one family and a ranger, neither of which seemed too surprised by two clowns walking backwards up this 15% grade. I don’t know why it was so difficult for me, and seemingly so effortless for Hoang, but man, it was tough. There are a few informational signs along the way (which I had to turn around to read), one of which explained the eerie banging from within the mountain. Ha! We weren’t crazy… There are pipes that draw water up from within the mountain to the summit museum, which causes these noises. 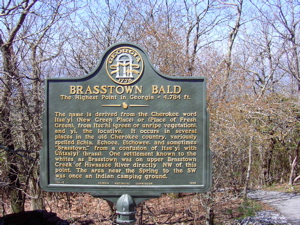 We completed the backwards portion of the climb and reached the giant summit tower/museum/spaceship thing. The museum and tower weren’t open yet, but we had the whole place to ourselves. The views were the best we’ve seen since maybe Mauna Kea. No one thinks of this stuff when Georgia is mentioned! 360-degree panoramic views of NC, TN, and GA… The wind was really whipping and we were thankful for our jackets. When I snapped this picture of Hoang, I had no idea her hair was in such a state… But I’m glad it was, as it is truly one of the classics. I’m thinking of putting it on our Christmas cards this year: 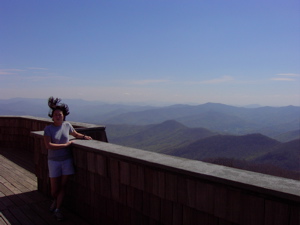 The museum was set to open in 20 minutes, but we didn’t really feel like hanging around to check it out. I’ve read that there are some pretty odd automatons in there that tell the story of the mountain (the Cherokees called it “Etonah,” “Brasstown” was a misnomer from the Cherokee word, “Itse-yi” which means “Place of fresh green,” as opposed to “Untsaiyi” which means brass–stupid white people, there was a mini gold rush here a while ago, and the Bald is the end point for the Cherokee version of the flood myth.) See, I learned all that online without going into the museum with ridiculous hours. Also, the benchmark is behind locked doors in the tower for some odd reason, so we didn’t get to see that either. 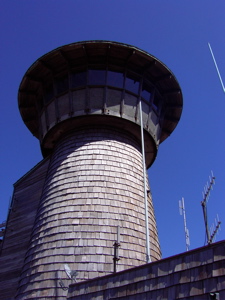 We never saw the aforementioned lady with her hiking poles and boots… I have no idea what happened to her, but I suspect spontaneous combustion.

The day was still young and I had some places to stop before we got to our hotel in Rome, GA. Somehow, Hoang got the idea that running the 2 miles down to our car would be a good idea. So away we ran… No way could I keep pace with the more compact Hoang… I had to come to a near stop every 180 curve so my momentum didn’t plunge me over the edge, whereas she could maintain speed all the way down. I love that girl. 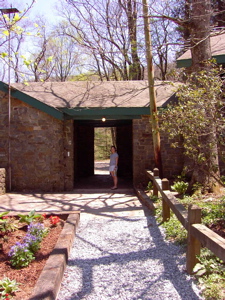 There was no question that we had to stop at the Walasi-Yi Center at Neels Gap. I mean, who wouldn’t, right? I had promised Hoang ice cream (again) and this is where I planned to find it… The AT passes through here and is the first critical way station for northbound hikers. We found the logbook from 4/14/97 with an entry from none other than… me. I was very excited about that. We also found a nice picture of our NH hike thru-hiker friends, Tin man and Godiva, which was pretty neat. Oh… And when I said, “passes through” here, I really meant it… This is the only place in the 2000+ miles where the AT officially goes through a manmade structure. From there, we drove to Amicalola Falls State Park where the AT access trail begins.

(Side note: As mentioned in the Katahdin report, I’ve now taken Hoang to both ends of the AT, the only vehicle that’s part of the trail – canoe portage in Caratunk, the only place it goes through a building here in GA, and, a few days later, we drove over the Bear Mountain Bridge in NY which is (was?) the only toll portion of the trail. All that is left is the highest — Clingman’s Dome in TN, which is also the TN highpoint, of course). 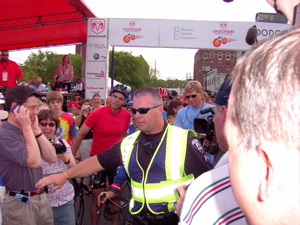 After that excitement, we sped west towards Rome to catch the Tour de Georgia time trial stage through town. We arrived near the finish, parked, and walked to the finish just as the first rider was coming through! The timing could not have been better. We both enjoyed it immensely, but never would I have imagined that right before the awards ceremony, none other than my hero, Lance Armstrong, would walk right by us on his way to the winner’s podium! Hoang touched his back and I said, “We’ll see you on the Alpe in July!” Unfortunately, my startstruck state resulted in this picture of Lance. Yup, that’s him behind the security guy, I swear. And that’s him on the winner’s podium. 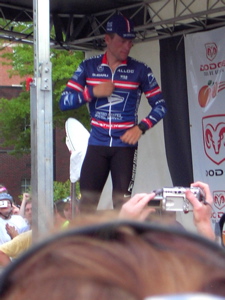 Rome was a pretty cool little town and we wound down a great day. Lest one think our day of adventure was complete, back at our hotel none other than the Italian pro cycling team Domina Vancanze was staying there… In our lobby was one Mario Cipollini (with his fine Italian model girlfriend). I didn’t bother him, satisfied with just being near the sprinting legend.

So, in one day, we highpointed Georgia backwards, ran down a mountain, saw the AT go through a building, saw where the AT begins, touched Lance Armstrong after he won the day’s 2 stages, and made eyes at Cipo. What, oh what, could Alabama possibly have in store for us tomorrow?! Highpointing rules. 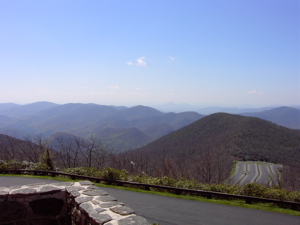