Not Quite the Lisbon, But Close Enough
Heritage Trail Vineyards, Lisbon
November 1, 2008

March 2013 Update: Closed! Which isn’t surprising to me… If you read this page all the way through, you’ll see how it really fell apart. Interestingly, I think our first visit with Diane Powell owning it was great. Then Harry and Laurie Schwartz took over and focused on expensive food. Then it closed in late 2012 and the Schwartz’s opened up the Cafe Colt in Hartford… which only lasted a couple years until it too closed. The food there was pretty terrible too.]

Ahhhh, Lisbon… Seafood so fresh it’s still alive, salt air, Vespas, and a rich wine tradition. A morning drive over to Madrid or Seville is always a weekend option… Ahhh. 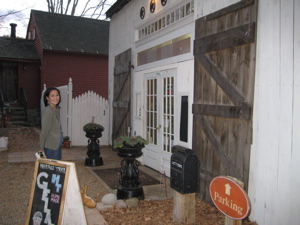 Lisbon, Connecticut? That’s really a town? Yup. Right next to Griswold. I can’t quite figure out where the villages of Jewett City, Occum, and Versaille fit into Lisbon and Griswold, but they are three of my favorite Connecticut fake towns. But back to our wine tour – this winery has a sort of synchrony with it and our 2008 goal:

It’s called Heritage Trail Vineyards and we are doing the wine Trail. It’s in Lisbon, which is the capital of Portugal, which is next to Spain, which is where the all-expense paid 12-day trip we have a chance of winning visits. It’s located on a National Scenic Road (Route 169). It’s open late on Saturdays, which allowed us to visit on a trip to see a show at the nearby casino. Um… I guess that’s it. 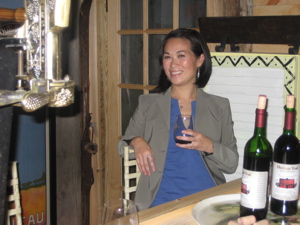 Up front: We loved this place. As I write this, we’re done with the 14 wineries needed to qualify for the grand prize drawing and I think this may be our favorite overall winery/vineyard. First – their website is pretty good. Unfortunately, all the text is actually in a jpeg format, so I can’t just copy and paste their descriptions. Oh well.

We arrived about 25 minutes before closing, just as the sun was setting behind the vineyard hills. Upon entry, this place is different. It’s dark and warm and inviting – and has a boutiquey feel to it. There is a small cafe and lots of Heritage Trail merchandise for sale. 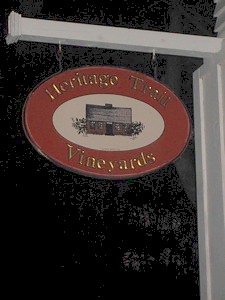 The historic John Palmer House is a center-chimney cape and dates back to 1790. The vineyards were planted here in 1996 and they occupy only six of the 37 total property acreage. There are woods here and three ponds. The house and barn and other historic out-buildings really give this place a cool feel.

We were greeted with open arms and escorted to the small tasting room – all of this is in a restored antique barn, mind you, but it’s very homey. There was no rush, despite the late hour. The owner, Diane Powell, was the happiest winery person we’ve met thus far. She gave us a large portion of walnut meat to cleanse our palates, which was great for me because Hoang is allergic to walnuts.

And I get to write “walnut meat.” 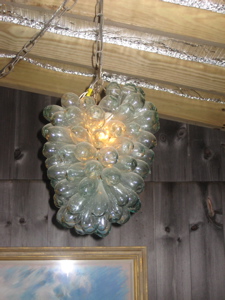 We opened with the Chardonnay – which was light and buttery. Diane explained that her chard does not touch oak barrels because she hates oakey chards. Wonderful – NO ONE likes oak. Heritage Trail actually (supposedly) grows all their grapes in the vineyard – I’ve learned this is no small feat with chardonnay grapes. It’s also no small feat to make a chandelier out of condoms, but they’ve somehow pulled that off.

We moved on to the Quinebaug White, a blend of Vignoles, Cayuga and Horizon. If you’ve not heard of Horizon, you’re not alone – Heritage got the last 300 vines from the NY research station! It grows very well in Connecticut. (I’m taking some of the impressive wine-speak from this website. We loved it and ended up buying a bottle later. And not just because CTMQ has visited the similarly named Quinebaug State Fish Hatchery either. 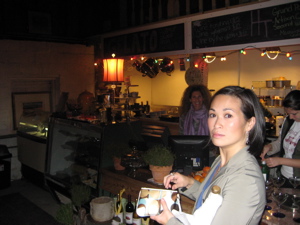 A couple more whites were served – and it should be noted, their sample sizes are, to my memory, the largest of any other winery we’ve been to – and get this: I didn’t dislike their “Sweet Reserve!” This is the only “sweet” wine I’ve tasted in the state to date that wasn’t too sweet. Again, Diane noted, “I hate syrupy sweet wine, so mine isn’t like that.” Kudos, Diane. Note: Hoang likes all the sweet wines every time… just a matter of taste.

There was no drop-off when we moved onto the reds either. In fact, I really liked all three. The Shetucket Red, Rochambeau Red (my favorite), and a Cabernet Franc – which had a distinctive, but not overpowering cherry finish.

Before we knew it, the front-of-the-house lights were off, but we were told to sit tight. The winery had a private party coming so they weren’t closing and we could linger about for as long as we’d like. In fact, we were given another large sample portion of our choice (we both went for the Rochambeau) and were offered some cheeses if we’d like. Wow… we could really tell these people are in the business because they truly enjoy it. 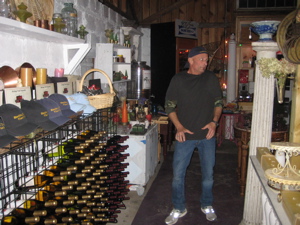 Oh, there’s more! Heritage Trail’s president happens to be Harry Schwartz (above, caught by my annoying camera) – television host and celebrity chef. The winery serves a bunch of his homemade gelato and artisan cheeses. There are other types of food served as well, and the winery has ambitious plans to add a full scale restaurant, smoke house, and who knows what else. Chef Harry is really quite successful, and has appeared on a ton of tv shows – including The Today Show.

This is notable because one look at Hoang and he said, “You probably get this all the time, but you look like Ann Curry.” I happen to think Hoang is prettier, but she’ll take it. (Hoang is also about 16 years younger, too.) 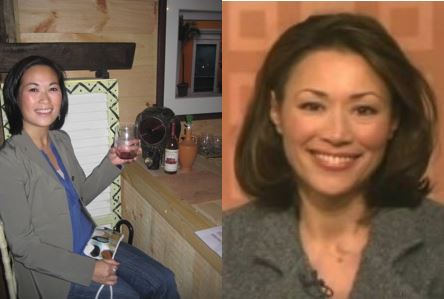 I learned Ann Curry was born in Guam when searching for this picture. Hoang was born in Vietnam. Exotic Birthplace Winner: Tie

One last note – notice Hoang’s great-looking jacket? Take a good long look at it, because it’s the last time you’ll see it I’m afraid. That is a real deal Prada jacket, mind you, and yes it does look great. About an hour after these pictures were taken, yours truly was about to enjoy a “wok fried potato” at the Shrine restaurant in the MGM Grand at Foxwoods. I grabbed the sauce-laden slice in my chopsticks, brought it to my mouth and… splat.

Grease spattered all over the jacket, ruining it forever. I tried to ply Hoang with hard liquor hoping maybe she’d forget, but that didn’t work. So be on the lookout for the most fashionably dressed petit homeless woman in Hartford County.

We returned one afternoon with Damian intending to enjoy lunch. The whole vibe now that the “dream” restaurant was a reality had changed. I didn’t see Harry. Dianne was nowhere to be seen. Our server was inattentive and didn’t seem to appreciate that we had a little kid. The patio was very nice and the hordes of yellow jackets thought so too. The food took way too long, was not very good, and ridiculously expensive. And the wine? Forget about it. Our pours were tiny and the wine wasn’t very good at all. I have no idea what has changed or why, but this place went from one of favorites in 2008 to probably the worst overall experience in 2010.

I appreciate that they want to be more a restaurant than a winery. That’s fine. But maybe they should visit Sharpe Hill to see how the double duty thing should work.