A Truffle not to be Trifled With
Bridgewater Chocolates, Bridgewater
(Brookfield and West Hartford retail stores)

Note: Aside from the intro and lack of inisghtful comments, this page is merely a copy of the one that I wrote for the Roadfood “Eat Before you Die” list, here. Keep in mind this was written 3 years before the creation of the chocolate trail, but I’ve added “future Steve” updates where warranted. 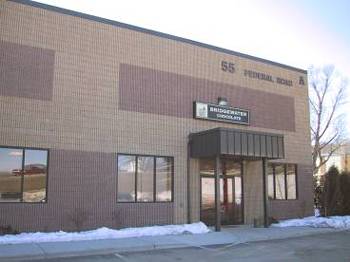 Bridgewater offers an enormous catalog of options for the sweet tooth in your family. First established by owner and founder, Erik Landergren in 1995, Bridgewater Chocolates specializes in American-style premium hand-made chocolates such as turtles, toffees, caramels and peanut butter patties. Winner of many awards and featured and reviewed in the country’s top magazines and newspapers, Bridgewater Chocolates are top-notch. The warm and inviting atmosphere, coupled with the enticing scents of gourmet chocolates make this one sweet spot to visit!

I found out the coolest thing this year; our year of frugality. (Future Steve: This was 2009) The traditional sixth wedding anniversary gift is something steel and the modern gift is, get this, candy. Now, we’re not a couple who cares a whit about those traditional anniversary gift list things, but I decided to stick to it this year. Candy? So easy!

And since I gave Hoang the greatest Christmas present ever – an awesome trashcan made of stainless steel – seriously, the girl loves the thing. Unparalleled design. Anyway, I took care of steel, so for our anniversary, it would be candy. 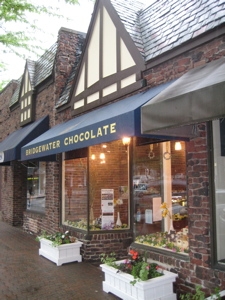 But not just any candy. Without knowing it at the time, I scored her the best chocolate truffles one can buy IN THE ENTIRE COUNTRY! So says Roadfood.com. And since I’m now working my way through their list of Connecticut “roadfoods” they think are the best, I might as well write about the experience.

Bridgewater is one of the towns with no museum, no trail, no nothing of any real CTMQ worth. (Future Steve: Not true at all, ignorant 2009 Steve) The chocolate factory used to offer tours, but that stopped a few years ago. Oh, and it’s Connecticut’s last remaining dry town, which is certainly an interesting quirk. (It sure is. I even have a whole page about it and my flaunting of that law.)

(Future Steve: This is no longer true, as Bridgewater is now “wet.”) 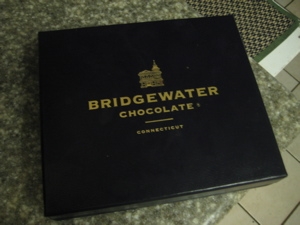 The world of chocolate reviewers does not agree with the Roadfood conclusion. Not at all. While they have been featured on the Food Network and in the New York Times, it appears only Roadfood loves them as much as they do. Reviews are mixed; USA Today loves ’em, NPR says “meh.” But…

The Roadfood Experience Excerpt: (From the book 500 Things to Eat Before it’s Too Late):

Of all the taste tests we’ve ever done, none was so debilitating as the time we set out to determine which chocolatier made the best chocolate truffles…

After we sampled over a dozen of the nation’s best, there was no question which was the creme de la cocoa. The unequivocal winner: Bridgewater Chocolate. Its hand-rolled truffles’ chocolate skin, dusted with fine cocoa powder, offers just the faintest resistance, and inside is silky filling that is unbelievably fresh, indescribably chocolaty, and richer than Croesus. 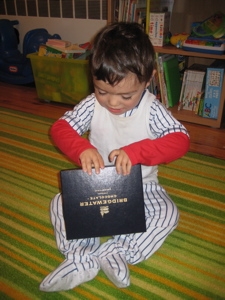 Disclosure: I didn’t go out to Bridgewater to buy my love her chocolates. I went about a mile to West Hartford Center, where they’ve recently opened up a shop. The saleswomen wore expensive dresses and the store had the ambiance of a Tiffany’s.

My box of pure chocolate truffles was $17 bucks, but I think I got charged extra for the bow Damian wanted on his gift for his mama. By the way, if you’re looking for a bulk discount, I liked this FAQ from their website: 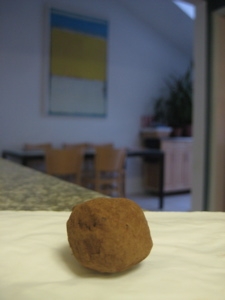 Sure. The Bridgewater box is of the highest quality, so that’s a nice touch. The verdict? I rather enjoyed the truffles – bittersweet and a perfect texture. Hoang, although she loved the gift from Damian, wasn’t so high on them. She was (and still is) perplexed how these are “the best in the country.” I hesitate at that as well, but enjoyed a few all the same.

Another Roadfood best down, and perhaps one of the most enjoyable. But methinks the Roadfood authors’ home – about 10 miles from Bridgewater Chocolates – may have colored their review.

Despite being so fancy-dan and expensive, Bridgewater Chocolate handed out bags of chocolates during the West Hartford Halloween Parade. (So did Munson’s, but this was a much better treat.) 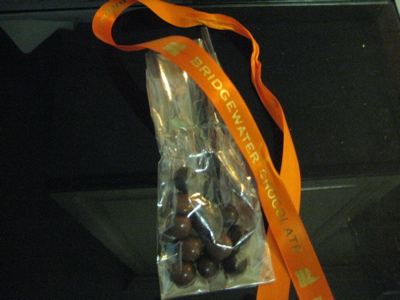