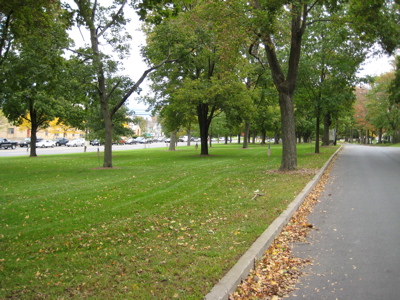 Anyone who has driven down Route 66 in Middletown has noticed the Washington Green. No one knows the name of it, of course, but that’s besides the point. I’m a bit iffy on the details here, because the green extends far beyond what I believe is the Washington part of it, but I won’t quibble.

There exists many war monuments along this route, commemorating Middletown’s fallen servicemen. The section we’re interested in is lined by a bunch of maple trees called “The Road of Remembrance.” Each of the 33 trees honors a soldier or sailor from WWI who died (16 in combat, 17 from associated disease/injury).

The maples surrounded a Civil War monument erected 16 years earlier to honor the Middletown men who fought in the 24th Regiment of Connecticut volunteers, 21 of whom lost their lives in the war. Later, a stone obelisk was set here to further honor the WWI dead. 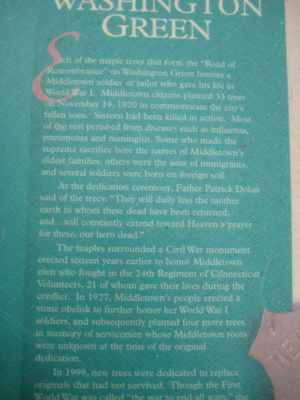 The brochure notes, “George Washington in Middletown” with no elaboration. So I’ll elaborate. Across the small one-way street is the tiny Washington Street Cemetery which was opened in 1739. A rather depressing cemetery, it contains worn brownstone headstones marking the graves of women who died giving birth, sailors lost at sea, infants given to disease, and Revolutionary War veterans killed by smallpox. Sheesh.

In the back of the little plot are several graves of Middletown’s African-American community. Many of them fought in the Civil War in all-black regiments, often enduring racial slurs of their Union “compatriots.” As you can imagine, this cemetery is part of the Freedom Trail as well.