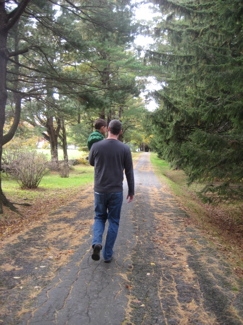 I used to maintain a personalized list on CTMQ called “Hidden Gems.” After a while, however, I realized that there were just too many and defining what was hidden became impossible. So I scrapped the whole thing. If I had kept up with it, Topsmead would be at or very near the top – for two reasons:

1) The house is immaculately kept and wonderfully presented, and,
2) It’s literally hidden away and intentionally (relatively) difficult to find.

It’s perhaps that last bit I find so interesting… More on that later. Topsmead (within Topsmead State Forest) is the former summer estate of Miss Edith Morton Chase, daughter of Henry Sabin Chase and Alice Morton Chase. Henry Sabin Chase was the first President of Chase Brass and Copper Company in Waterbury. Chase Brass was one of the leaders in the brass industry when Waterbury was the Brass Capital of the world.

The Chase name is fairly prominent around Waterbury; there’s the Chase Highway, (what is now the) Chase Out-patient clinic, and the Chase Collegiate private school. But in chasing the Chase trail – and I chased it pretty far down the rabbit hole – there are many interesting things to find. In my opinion, anyway. 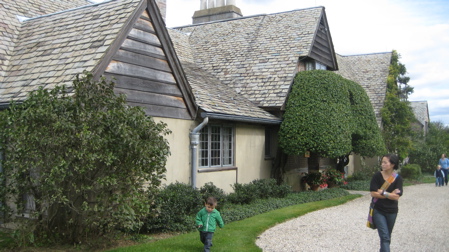 Are you familiar with the Mercantile Building in New York City? It’s the deco style sky scraper across the street from the New York Public Library’s main branch in Murray Hill. Guess who the first tenant was? None other than Chase Brass and Copper Company. 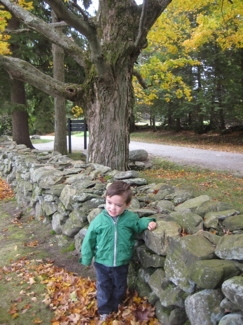 Want more? I do. The original Chase headquarters in Waterbury is on Grand Street across from the city hall. It is now occupied by the city of Waterbury’s offices. Chase Brass commissioned well-known architect Cass Gilbert to design it in 1916, across from his recently completed Waterbury city hall. Henry Chase, the company president, specifically requested that the headquarters be designed to contrast with the style of the city hall, resulting in a design which shunned colonial marble and brick. The company sold the building to preservationists in 1963 for one dollar, who in turn sold it to the city of Waterbury to be used as city offices, a function it still serves today. It is now known as the Chase Municipal Building and is part of Waterbury’s Cass Gilbert Historical District.

The Chase Dispensary, a medical clinic for employees of the Chase Brass and Copper Co., opened one of the first birth control clinics in the country in 1938. (This was a personal passion for Ms. Chase.) 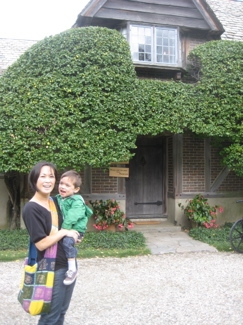 During WW2, The Chase Brass and Copper Company made more than 50 million cartridge cases and mortar shells, more than a billion small caliber bullets and, eventually, some of the components used in the atomic bomb. Chase also had a line of art deco household items in the 1940’s before their war efforts took over. In short, Miss Chase had a ton of money.

So let’s focus on her and her summer home that is now the museum we visited on a beautiful October Saturday. Topsmead is not featured prominently on any state or even Litchfield tourist literature as far as I can tell. (Fortunately, the DEEP has written up a nice history online for me to borrow from.) 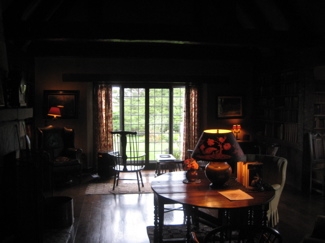 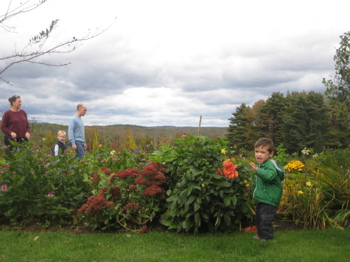 It’s that “be kept in a state of natural beauty” clause that keeps the house “hidden” to this day. In fact, she had a specific provision in her will that disallows signage to the estate – anywhere. So once you turn off of Route 118, you really need to know which twists and turns you must take to get there. The state sticks to her will fervently – there literally are NO signs at all pointing the way. [2017 Update: this was cute for 100 years or so. GPS and map apps have rendered this moot.]

That’s not the only kookiness displayed by Miss Chase. She apparently had a slightly strange obsession with all things English/Irish. 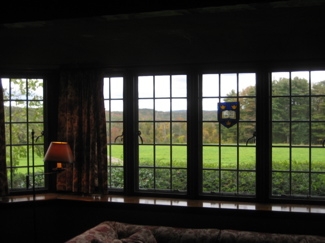 In 1917, Miss Chase received from her father approximately 16 acres on Jefferson Hill in Litchfield. Here she built a rustic cabin, which was replaced with a more substantial summer home in 1923. She hired noted architect Richard Henry Dana, Jr. to help her design and build the English Tudor style house which was completed in 1925. The exterior woodwork is of cypress, the downspouts are lead, the walls of brick and stucco, and the roof is slate. The interior woodwork is oak, as is most of the flooring. The foyer, hallway and dining room floors are of polished terra cotta tile. Most of the interior walls are of the same type of stucco as is found on the exterior. Fine craftsmanship, an eye for detail and understated wealth are evident throughout the house, which is tastefully and simply furnished with 17th and 18th century English country antiques. 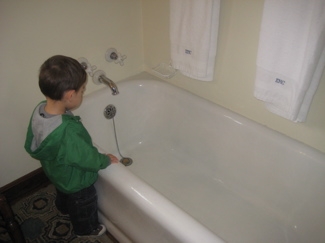 She apparently decided that since she wouldn’t be able to live her life out in the English countryside, she was going to create it in Litchfield. And from the looks of it, she succeeded mightily. The house is stunningly beautiful and kept up incredibly well by the state (I guess her endowment is quite separate from Connecticut’s bankrupt General Fund.) 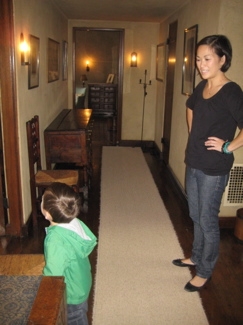 Miss Chase loved the outdoors and as much care was given to the landscaping as was given to the design and furnishings of her home. Surrounding her home are plantings of holly, lilac, and juniper. Apple trees line the drive and formal gardens on each end of the house compliment the English Tudor architecture. (Our guide told us the apple trees are so heavily pollarded that they never yield any fruit at all – at the expense of looking perfect.) 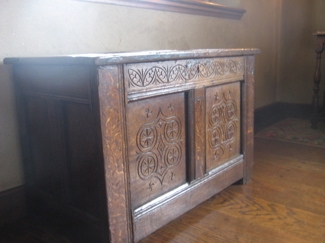 I must include a picture of an extremely valuable piece of old furniture from EVERY historic house.

Edith Chase shared her summer home with her life-long companions, Mary and Lucy Burrall. The ladies spent the winter months at the Burrall sisters’ home on Church Street in Waterbury. Because it was their dream to create a pocket of serenity, the ladies’ lifestyle at “Topsmead” was relaxed. Guests were entertained informally.

Our guide also told us that men were never allowed to stay at Topsmead proper. Despite being a vocal advocate of women’s rights and birth control – quite revolutionary for the times – she had an entirely separate Spartan building built for male guests. (It’s right next door, but still…) 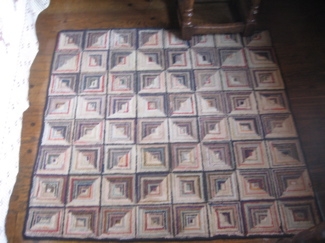 Miss Chase was a clever businesswoman. She built up her financial inheritance and subsequently her real estate holdings. One of her most significant acquisitions was the 1927 purchase of the Buell Farm which was renamed Topsmead Farm to reflect its location at the “top of the meadow”. The farm produced food used on the estate. In addition to vegetable and flower gardens there were beef cattle, poultry, sheep, pigs, and at one time, draft horses.

Our visit to Topsmead was wonderful. The set-up, even beyond the slight difficulty of finding it in the first place, is sort of off-putting. Upon arrival, we found the entire joint to be locked up tight, though we knew there was a tour going on inside. Since we had Damian with us, we were a bit impatient and rang the doorbell a few times – and Damian rang it about 80 more times, I’m sure thoroughly upsetting the docents and tour-goers inside. 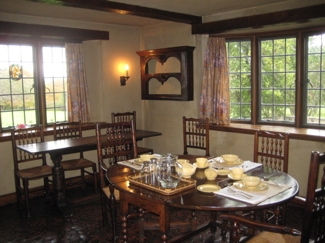 The free(!) tours are given every 45 minutes (I think), but we were allowed in and integrated quickly with a tour part-way through. The guide was unfailingly polite and very understanding regarding our situation. Hm, maybe that’s a new nickname for Damian – “Our Situation.”

Anyway, the inside of the house is even more organized and pristine as the outside. There are antique maps of Litchfield and the surrounding area. Authentic period furniture fills each room, as well as a full library of books.

While I wouldn’t recommend bringing your little rapscallions to Topsmead, it was nice that Damian was allowed to sort of roam around and check things out on his own. Of course we kept him reigned in, but he was allowed to be a three-year-old and do things like this: 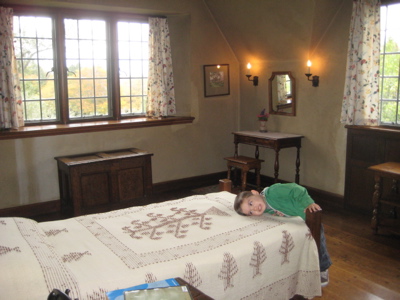 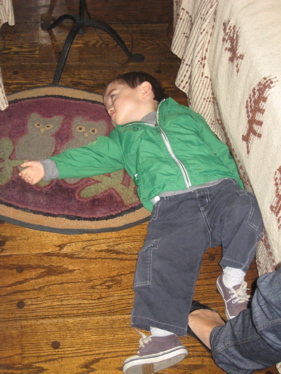 Actually, our guide was so cool that prior to that last rug picture, he challenged Damian to “find the owls somewhere in this room.” I won’t stray too far off topic, but I’ve participated in a few museum research forums and have repeatedly noted what makes a good tour, well, good. I’ve told this story a few times – our guide at Topsmead was one of the best – if not THE best – guides I’ve met so far.

He engaged the group, he probed for what interested each of us. He quietly discussed architecture with those who cared while the rest of us milled about. He talked landscaping with me while the architecture people pored over some artifacts. And yes, he made it a point to even engage little Damian, which was something I will never forget. (And by engaging him, he engaged us as his parents as well.) 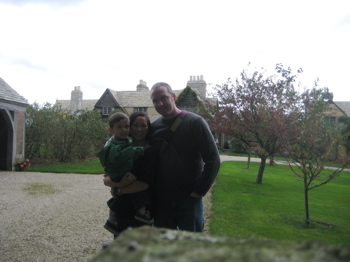 And so, when I talk about how much I enjoyed Topsmead, I say that not necessarily because it’s beautiful (it is) and historically cool (it is), but because the guide made it great.

And that, museum people, is today’s lesson.

I should note that there are numerous trails and unpaved lanes are available for walking. In addition, the Edith M. Chase Ecology Trail offers a 7/10 mile walk with interpretive signs.

Topsmead
A 2017 outdoor visit with my sons