Thanks Brochure, thanks for giving a lot to work with here. “Abolition site.” Great. Here’s what the corner of Broad and William looks like: 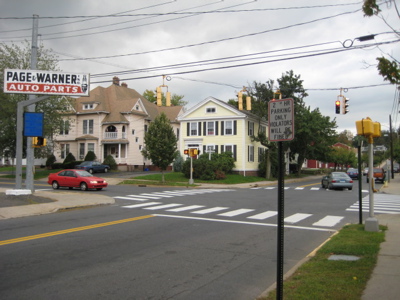 Fortunately, the fine Heritage Trail folks have stuck a sign here. As it says, at this site, on a spring evening in 1834, a violent mob descended on a small group of Middletown residents who had come together to work toward abolishing slavery. The abolitionists, both black and white citizens, were members of the newly formed Middletown Anti-Slavery Society. They held their meetings in a small factory, and it was here that a mob of local bigots – some of them prosperous “gentlemen” – attacked the abolitionists, pelting them with eggs and rocks., chasing them through the streets, and even cutting open the face of a minister.

Though only a handful of slaves remained in CT by the 1830’s, millions of blacks continued in bondage in the southern states. Abolitionists believed slavery was a monstrous evil and a national sin for which all Americans must take responsibility. But some in the north felt that this growing movement would destroy the Union (I guess they had a short-sighted point) so they formed many mobs like the one here in Middletown.

But the abolitionists remained steadfast in their beliefs and only grew in numbers here in the north. Word up.