2017 Update: Coltsville is now Coltsville National Historic Park! It joins Weir Farm National Historic Site as the only National Parklike things in the state. It took 20 years to get that designation, so it’ll be many more before it resembles anything like you might think it should. (Weir Farm took something like 17 to become what it is today.) This page was written in 2010, and I’ve left it intact.

More from the Courant.

I would ignore the following, but I like the picture and reference too much… in 2013 or so, Café Colt opened in the Armory here. The former owners of the long-closed Heritage Trail Vineyards in Lisbon (Our visit here) opened up a cafe here in advance of, “The crowds that the new national park will bring.”

It didn’t last. We visited once and… yeah. If our experience was indicative of the cafés general service… it closed after a year or so. But I will always have this picture. 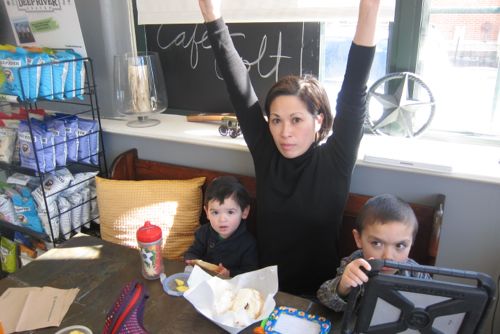 It’s a shame that the only entry on CTMQ for this area is this one (for now – 2017), sort of hidden away in the National Historic Landmarks list. Why? Because this whole complex should be a museum. And not just any old museum, but potentially part of a National Park or more realistically, a National Historic Site or National Historic Park (they’re all different… Trust me). Sort of like Weir Farm out in Wilton. 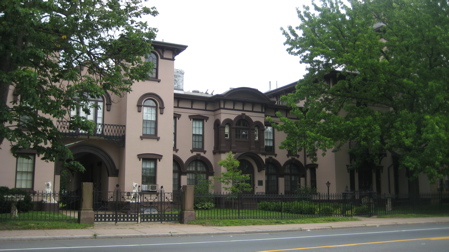 No, really. Right there in a scruffy section of south Hartford. There is a fairly organized, completely serious movement afoot to get this done. Armsmear (“meadow of arms”), also known as the Samuel Colt Home, was the family home of firearm manufacturer Samuel Colt and has been a National Historic Landmark since 1966.

But like I said, historians and preservationists wanted (and still want) more. Aside from the massive pinkish Armsmear, there’s also what is now Colt Park and the many original Colt Factory buildings over near I-84 that are sloooooooooooowly and carefully being converted into businesses and loft spaces. The factory buildings’ saga has been a long, expensive and ridiculous battle to preserve the famously blue-onion domed complexes – and almost in spite of the development, the rest of Colt’s original property was finally designated a NHL in late 2008, getting renamed and expanded from just Armsmear to the larger Coltsville Historic District. 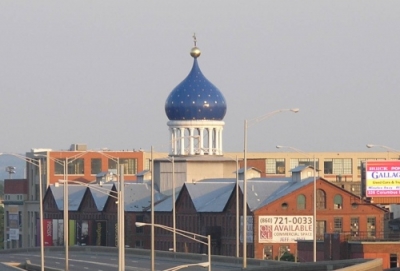 The district is technically an expansion of the National Historic Landmark listing for Armsmear. The broader listing expands the focus beyond Colt himself to include the company’s technological and marketing innovations and its ongoing leadership in the armaments industry after Colt’s death, as well as other important figures associated with the company, including Elizabeth Colt, other company leaders and inventors, and the thousands of employees who worked there over nearly 100 years. 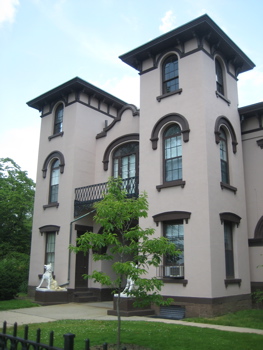 While the factories and park grounds have undergone significant changes over the years, the original “house” still stands on the hill overlooking the once-proud gun empire. Armsmear was planned for Colt’s 1856 marriage to Elizabeth Hart Jarvis. It was constructed in 1856 by an unknown architect, possibly a local named Octavius Jordan or factory engineer H. A. G. Pomery, on grounds overlooking the recently completed Colt Armory. It was described contemporaneously: “An Italian villa in stone, massive, noble, refined, yet not carrying out any decided principle of architecture, it is like its originator, bold and unusual in its combinations.” It features a low-pitched roof, heavy bracketed cornice, round-arched doors and windows, iron balconies, Italianate tower and details, and Turkish domes and pinnacles.

The Colts occupied Armsmear in 1857 and promptly began to develop its gardens. Landscape architects Cleveland and Copeland provided the plans. Unusual, glass-domed conservatories, inspired by London’s Crystal Palace, were added in 1861-1862. Ultimately, the estate contained some 2,600 feet of those ornate greenhouses (see links below). 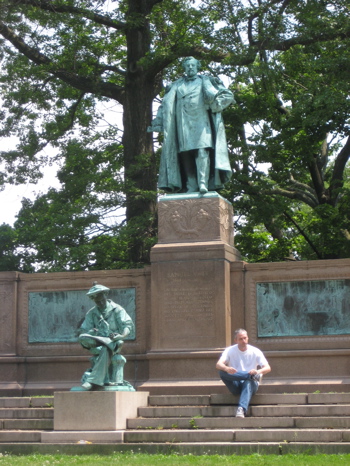 After Elizabeth Colt died in 1905, the house was converted to a home for Episcopalian women (in 1911) under the terms of her will. She also gave 140 acres of Armsmear’s grounds to create Hartford’s Colt Park. Colt Park has undergone fairly large changes since Colt’s time. Where now there are ball fields, playgrounds and an insane religulous shrine (CTMQ visit here), there once stood massive greenhouses, as well as ponds, fountains, and a deer park. (Back in the day, white tail deer were somewhat rare apparently.)

In addition to Colt Park, the district includes the factory of the Colt Fire Arms Manufacturing Company as well as factory housing and other community buildings associated with the firm. Some of the factory buildings, namely the Machine Shop, Warehouse, and South Armory—have been rehabilitated, in compliance with the Secretary of the Interior’s Standards regarding character-defining features such as windows, roofs, and facades. The workers’ housing, Armsmear, James Colt House, and church buildings have exteriors that have been relatively well preserved. 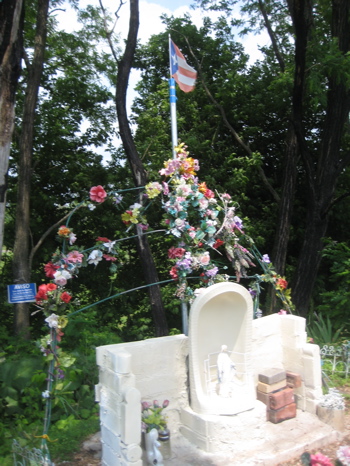 Ten multi-family worker tenements (1856), across the street from the factory, and nine “Potsdam” cottages (1859), near the site of Colt’s willow ware factory, remain. The ten units of worker housing (1856) between Huyshope and Van Block avenues are relatively unaltered from their historic appearance.

The historic district includes one object, the large memorial statue of Samuel Colt in Colt Park commissioned by Elizabeth Colt shortly before her death. The statue is counted as part of the NHL because it memorializes the founder of the Colt Fire Arms Company and Coltsville. I personally found this monument important enough to warrant its own page, here. 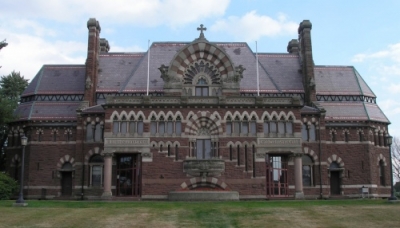 Getting to this point was a battle. The National Park Service initially turned Coltsville down because of concerns that the factory buildings, which are being converted to non-industrial uses, had lost their historic integrity. However, the agency reconsidered upon urging by Governor Jodi Rell, Senators Christopher Dodd and Joseph Lieberman and Representative John Larson, and after the nomination was revised to make a stronger argument that the conversion work, which is being done to the Secretary of the Interior’s Standards for Historic Rehabilitation, substantially preserves the buildings’ historic appearance. 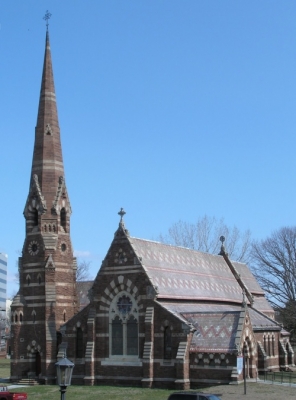 And believe me, there are heavyweights making that very argument. Notably, Friend of CTMQ and CT historical king, Bill Hosley has made making the Colt Historic area a National Park his rallying cry. As of today (June 2010), it is not. But if I know Bill, and those in the state who share his vision and passion – and yes, I’m getting to know more and more of them – it will happen.

The expanded NHL designation was just the first step. We’re getting there.

Return to the NHL Main Page 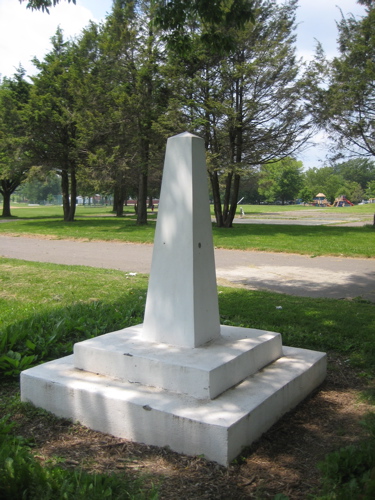 Mystery monument to no one in the park, near Huyshope Avenue