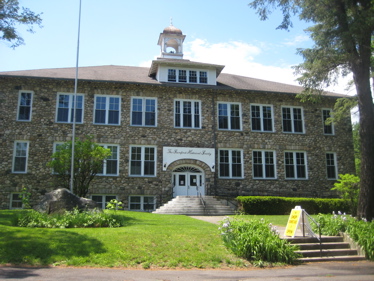 Which is sort of the problem for me. With all that fine and dandiness, there’s nothing goofy or terrible or mind-blowing here for me to focus on – or much remember. My apologies to the Stamford Historical Society.

Still, a city like Stamford deserves better from me.

Stamford is the rare Connecticut town that has affluence, a true downtown, and true suburbs. I know that probably sounds weird to any non-Connecticutian unfamiliar with the uniqueness of our state’s 169-town structure, but it’s true. Most of our towns are pretty much entirely city, or entirely suburb around a small town center, or entirely rural. Stamford offers a true mix. 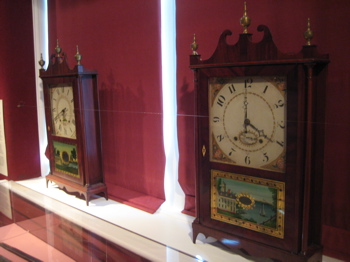 And their historical museum sits prominently on High Ridge Road in a pretty imposing looking stone building. It looks rather huge, but I came to learn that the upper floors are for storage and the basement is for an ongoing ever-present tag sale. (My friend Caroline, native Stamfordite, told me that she has scored some designer purses and stuff down there for dirt cheap. Ahhh, Fairfield County…)

Upon entering, we were greeted by a nice older man with an enormous amount of talkative energy. For those of you who don’t know me, I do not possess the same quality. Often, I’m rather stoic when I’m CTMQ’ing… usually trying to memorize as much as I can and thinking of ways to frame the story of the place on this website. 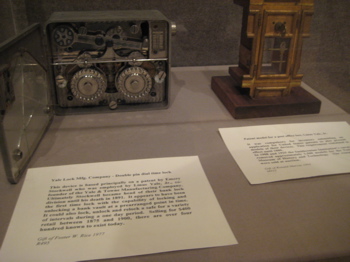 As you’re finding out, I didn’t do such a good job of that at the History Center. The guy who welcomed us also welcomed us to open our wallets and drop five bucks each into the donation jar. In fact, he more or less insinuated that the fee was required, despite the giant lettered “DONATIONS APPRECIATED” sign. Now, I always donate at least a few bucks to these places, whether asked or not. (Later in the day, down at the Hoyt-Barnum House, I mentioned this to the docent there who seemed a bit perturbed by the pushiness. But hey, he got 10 more bucks from us in the till and I don’t begrudge him that.) 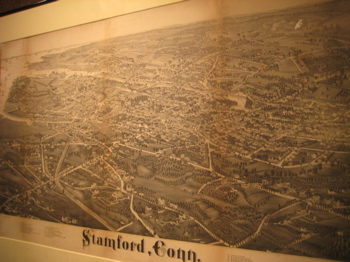 Fortunately for all of us, the SHS maintains a rather comprehensive website. In fact, there’s almost too much information going on over there. As I gather my thoughts for this page, let’s let them help us out to learn a bit more about these Stamford people…

The Stamford Historical Society helps people know about, experience and value their own and the region’s history, culture and traditions so that this understanding may enhance their experience of the present and the future. The lessons of the past offer much to solve the problems of the present and prepare for challenges to come.

For children to grow up whole, and ready to take their places in the world, they must have assets: not stock certificates, but the personal assets of healthy self-esteem, appreciation for their origins, feelings of connectedness, belonging, and responsibility to a larger community. These inner resources help them withstand the pitfalls of growing up, expand their understanding of what they might accomplish, and strengthen them to pursue a future full of promise. It is precisely because we must address society’s urgent problems of today that we look to our history, culture and traditions. 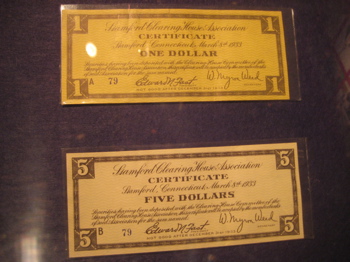 Wow. Not your typical intro to a historical society, now is it? I should ask them if I can use this stuff as it relates to CTMQ. It makes me feel… Important.

To understand the importance of cultural tradition, one need only compare the experience of religious groups who came to this country to exercise their traditions freely with that of people indigenous to North America and people brought to this continent against their will, both of whose cultural traditions were broken down by outside forces.

As technology depersonalizes the way we live, work, communicate and relate to one another, it expands the importance of being able to see in the flesh the wonders of what used to be. Research on the Internet can never produce…

…the awe of seeing the real life diaries of a Civil War veteran or the relics of how ancestors experienced defining moments in their lives.

Phew. Fair enough. And I agree! My intent with CTMQ as it relates to museums is that it is A) A giant aggregation of lists for people to use and B) more of an advertisement/jumping off point for museums, NOT as a substitute. This second notion used to really bother me, but now that I’ve learned more about how people use CTMQ, it no longer does. 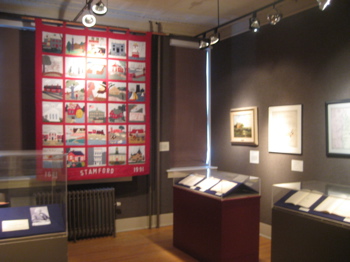 Adding to my difficulty in writing this page, the society’s exhibit during my visit was sort of a purposeful mish-mash of their collections. A Major Milestone: 100th Anniversary of the Stamford Historical Society’s Incorporation contained (great) bits and (good) pieces of their various collections; showing visitors a breadth and wealth of what the society maintained.

There is a (I think) permanent exhibit which focuses on the founding and early days of Stamford. Most town history museums have these “wings” and quite frankly, it’s what usually most interests me. I always love the old maps, especially when they teach me that Stamford contains a large phallus. 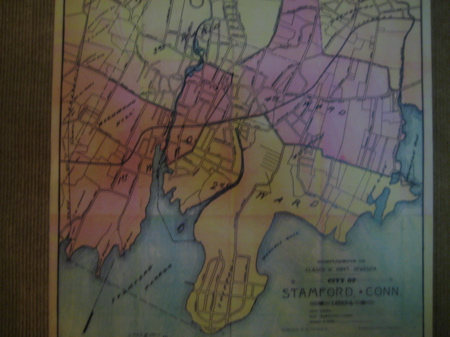 I like to think that’s where Connecticut relieves itself on New York. (I don’t know why I’m being so delicate here… I don’t figure on this being one of the most thoroughly read pages on this site.) Let’s get back to smart people talk, from the SHS website:

Although the Stamford Historical Society was founded in 1901, it took a number of years before the Society met regularly. After meeting five times between October of 1901 and March of 1902, the Society did not meet again until the fall of 1905. From then on, monthly meetings were held, other than during the summer months of July and August. This practice continues today… 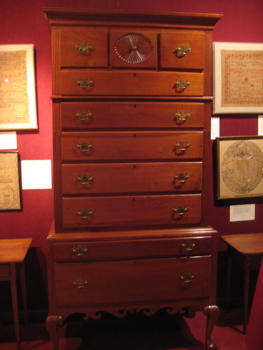 It goes on about bylaws and this and that. Let’s skip ahead.

In order to celebrate the 100th anniversary of incorporation, the Society is putting together a centennial exposition, 100 Years in the Making: Highlights from the Society’s Collections, that will chronicle our history as well as show off some of the finest pieces in our collections. 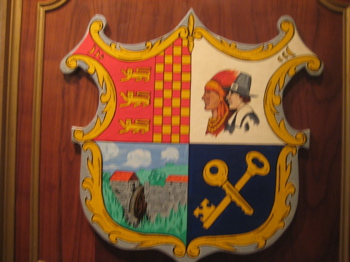 The Hallway will illustrate the history of the Society from its inception in October of 1901 to the present. The biographies of some of our charter members will be featured in addition to pamphlets, photos, flyers and newsletters put out by the Society over the years. We are also endeavoring to include photos of every one of our past presidents from Colonel Hopkins to the present. The exhibit will give the viewer a thorough understanding about where the Society has been in the past, what have been its chief foci and concerns, and where we are going in the future. Featured will be a mini-exhibit about our Hoyt Barnum House, including a scale model of the house built in the 1960s. 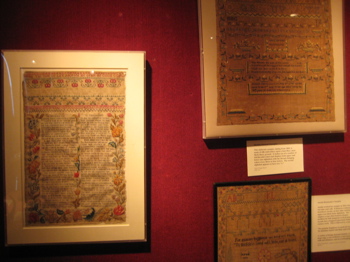 Hm. At this point, I’m not so sure this is the exhibit I saw. But it sounds good, so let’s keep rolling with it.

HBH was acquired by the Society in 1943 but did not serve as its headquarters until 1950. It was at an historic board meeting when, after hearing a poem composed by Mrs. Hilliard, long-serving SHS Board Secretary, in which the House was given a voice through the poem, the Board decided unanimously to make HBH its home. The Society did not move to its present address until 1984.

First off, I hate “an historic.” I know it’s what people like to do now, but it still annoys me. Anyway, the move from the tiny Hoyt-Barnum House to this much larger building a bit further away from downtown was an excellent move. The building was given to the society by the town. 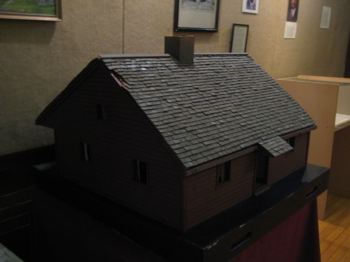 There is a nice explanation at the SHS all about how the society acquired the Hoyt-Barnum House and how it used to be much bigger in the mid-20th century, thanks to several additions. Once the building began showing its age, the society decided to “undo” all the “progress” and restore the house back to the way it most likely was circa 1700.

The Red and Halliday Galleries will feature some of our most prized pieces from the collections. The objects will be presented in much the same style as in the American Wing of the Met. The exhibit will be arranged chronologically with room-like settings interspersed with cases filled with objects pertaining to national events as they affected Stamford, such as the Revolutionary and Civil Wars and WWI and II. Many of the items that will be displayed have either not been shown or have not been seen for a very long time by the public. Included will be furniture, decorative items, textiles and memorabilia.

Ah yes, now it’s coming back to me. THIS is what I remember of the collection on view – and my terrible (as always!) pictures sort of back up the above paragraph. 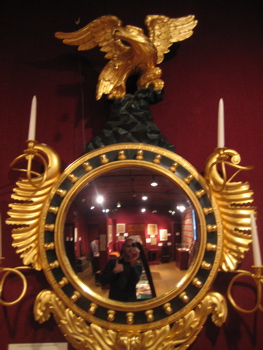 A lot of the artifacts here come from the Charlotte Cruikshank collection. Like the old 18th century furniture and the dresses. Apparently, the society has a massive collection of dresses that were donated by Cruikshank. Oddly, I learned that fact down at the Hoyt-Barnum.

As you can see from the pictures (barely, I admit), the museum trotted out some of the best stuff. From Connecticut made clocks to chinaware and needlework, the SHS was just showing off – which I appreciate.

I also appreciate really cool, unique and historic items, like this flag: 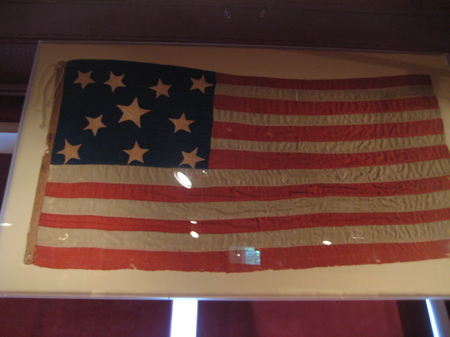 Wow, that’s a kooky flag. Is it real? Apparently, yes. This flag is so crazy that my cursory search on the Intertubes came up with nothing. So I shall type out with the sign under the flag said:

This 18th century American flag, part of the SHS’s textile collection, is of a type known as a “45”. We are told by noted American Flag historian, David Coughtry, that this flag is the only “45” known to survive, although at one time such flags were far from a rarity. “Number 45” became a stirring call to American Liberty from Great Britain, due to John Wilkes’s issue Number 45 of the North Briton calling for American representation regarding the Townshend Acts.

Great Britain was left with a large debt at the conclusion of the French and Indian War in 1763 and looked to impose new taxes on the American colonies as a solution. The proposed taxes were called the Townshend Acts, and it was in 1763 that John Wilkes wrote the “Number 45” article that first presented the idea of “no taxation without representation.” King George III imprisoned him in the Tower of London. His case became a major test of freedom of the press, freedom of speech and freedom from taxation without representation – freedoms which were soon after the Revolution incorporated into the American Bill of Rights. Wilkes’s printed pamphlet is often linked to Tom Paine’s Common Sense as a leading element in stirring up the fire leading to American Independence. 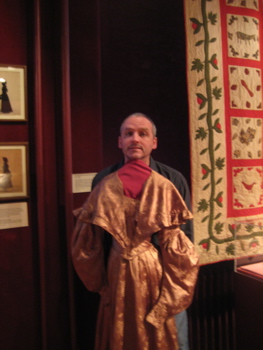 The British Colonial Secretary forebade the flying of nine-star flags because of Wilkes’s popularity in the colonies; hence the Society’s flag with ten stars, with four stars to the left of the central star and five to the right. This flag is done in code, to indicate support for “number 45” without running the risk of arrest. 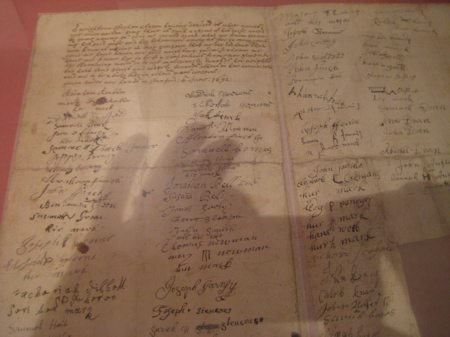 This, my friends, is an affidavit from the 1690’s attesting to one young woman’s non-witchery. She was accused and it was believed at the time that only witches would defend a witch. So when 76 people signed this sheet, she was acquitted and lived out a full 83 years in Stamford. I don’t know about you, but I’d find away to get out of the town that thinks me a witch.

But that’s just me.

Those were the two major highlights of the collection for me. And now, if you’ve read this far I say thank you. Thank you for sticking with me and now you’ve been rewarded. 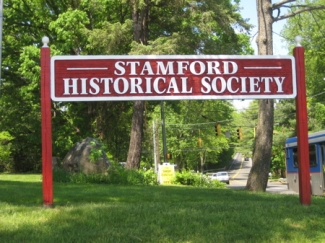