This place is in Gales Ferry. Gales Ferry? Ah yes, another of Connecticut’s weird naming conventions; Gales Ferry refers both to a village within the town of Ledyard, Connecticut, and to a complex of buildings within that village at the site of the ferry which gave the community its name. The village is named for the ferry operated by Roger Gale at the current site of a Yale University crew training camp. Originally its own community, Gales Ferry has been administratively absorbed by the larger town of Ledyard, but nonetheless retains its own US Post Office and a Gales Ferry Library branch is operated within the greater Ledyard library system. 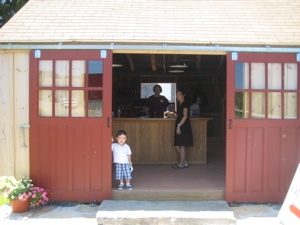 I just wish “Gales” had a dang possessive apostrophe.

Keep in mind that in Connecticut, these villages like Gales Ferry are treated like town unto themselves with signage and town services as noted above. That’s why it always interests me. I used to think I’d stop caring about this quirk, but now I’m resigned to a lifetime of misplaced fascination. 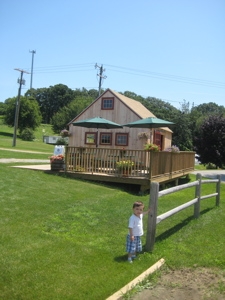 Holmberg Orchards is, as the name implies, an orchard first and foremost. They are a…

…family owned farm enterprise that is now in its fourth generation. Adolph and Hulda Holmberg, recent arrivals from Sweden, originally purchased the farm in 1896. The farm soon produced vegetable crops that were well known for their high quality throughout Southeastern Connecticut. Harold and Henry Holmberg purchased the farm from their mother, Hulda, in 1931 and began planting apple, peach, and pear trees in 1935. Today, Harold’s son, Richard, along with his wife, Diane, and two of their children continue the Holmberg Orchards heritage of excellence in fruit production. While the size, shape, and variety of apple trees and fruit crops are constantly changing with modern farming techniques, Holmberg Orchards commitment to grow “the finest fruit for the finest customers. 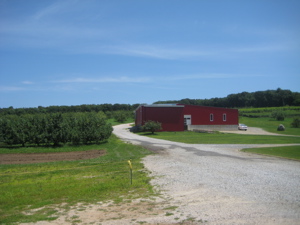 But what about the wine? It’s a small operation and has only been part of the wine trail for two years now. Holmberg is a different kind of wine tour stop though…

After driving up the steep and winding road to the top of the hill, we parked in the HUGE parking lot (must be for pick your own events) and walked over to the tiny little cabin built exclusively as a tasting room. Since I only use the word “cute” to describe Damian and kittens, I’ll say that Hoang declared the little tasting cabin “cute.” 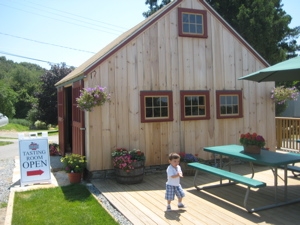 It’s also a little bit weird somehow, standing all alone on top of the hill near the orchards and an old shed with farming equipment. That’s not to say it isn’t inviting – it is – so we walked in and asked for a tasting. (I wonder how this place is on torridly hot days? I’m not sure it’s air conditioned, but I hope it is.

Anyway, the woman poured us each a glass of wine and made some pleasant small talk. None of that talk, however, was in reference to the wine we were tasting. Now, I’m not one for platitudinous pontifications on the intricacies of wine. But I do like to know what I’m drinking in the broadest of terms. Especially when it’s pretty good, which this was. (There was a laminated sheet right in front of us describing the wines and she did describe them during subsequent pours, so ignore me.) 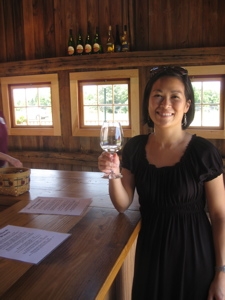 Turns out, our first wine was something called Pearfection – A dry, delicate wine made from our Bartlett pears. Aha! Perhaps she knew that name would predispose me to have reservations. Genius! The fruit was very, very subtle and barely discernible to my weak palate. Again, I was (and am) surprised I liked something with not only fruitiness, but a corny name to boot.

Corny names seems to be a requirement for fruited wines in Connecticut. For after the Pearfection, we moved through Three Sheets Apple Wine and then Bluephoria Blueberry Wine – A mellow red wine made from blueberries. Like Hoang said, “Cute.” The blueberry stuff was actually sort of good and again, very subtle. I was not a fan of the apple wine – a true apple wine delicately aged in French oak barrels. Yup, the oak once again killed it for me. 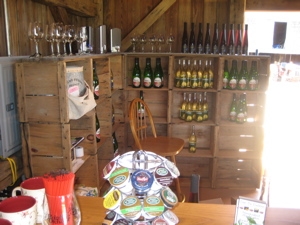 That was it for the wine; time to move on to the hard ciders. I’m surprised there aren’t more hard cider makers in Connecticut. It’s a New England tradition and appeals to a broad range of people: Northern European boozers, college chicks, and when marketed correctly, wine people. Holmberg is going for the wine people demographic, serving their ciders in wine glasses and describing them like fine wines.

Holmberg makes three types – one from Russett, Cortland and Macintosh apples each. The Russett was our favorite, hands down as it was quite tart and clean. The Cortland one was decent, but a little on the sweeter side. Lastly, the Mac variety was like an apply-sweet champagne and didn’t really work for us. I’d rather just drink champagne.

Holmberg Orchards is definitely unique and I really like what they’re doing down there in Gales Ferry. The complimentary wine glass was “cute” too (according to Hoang) with a happy bee logo. Their produce store right on Route 12 a few miles north of the Groton Sub base is open year round and it looked really good. 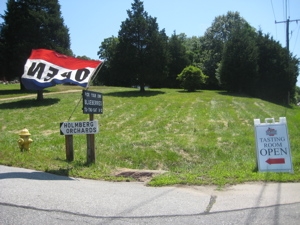