Franklin My Dear, I DO Give a Damn
Franklin (Google Maps location)
October 2, 2010

When I say “Franklin,” what image comes to mind? That children’s story turtle? A key and a kite and a bolt of lightning? Ben Franklin himself? Almost certainly not Franklin, Connecticut. 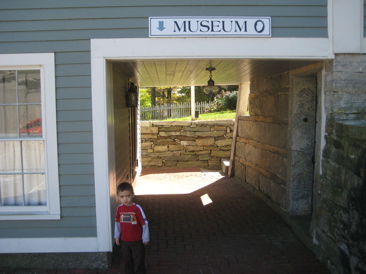 Franklin is one of our smaller, less-thought-about towns. And if you’re from there, don’t get all bent out of shape – you know it’s true. But unlike its neighbor Bozrah, Franklin has a couple museums, some trails – and an excellent Farmer’s Cow farm (CTMQ Visit here).

I read somewhere once that our fair Franklin was the first Franklin named after Benjamin Franklin. I can’t seem to corroborate that right now, and when I mentioned it to the docent at this museum she sort of got wild-eyed and said “Yes!” in a way that told me, “I have no idea if that’s true or not.” (But our Washington IS the first Washington named after George Washington, so there.) 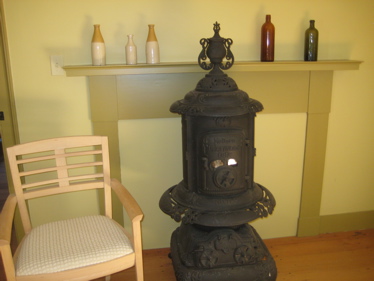 Unlike typical West Hartford families, we spent a resplendent October Saturday at Franklin’s two museums and had a grand old time doing it. Okay, so maybe Damian wasn’t so excited about the Ashbel Woodward House, but whatever. You should be used to it by now, kid.

This is the rare “new” historic house museum; only becoming such in the last decade or so. The museum project began in the mid-1990’s when the state Department of Environmental Protection, which previously owned the house as part of a wildlife study site, decided to sell the property. The town of Franklin bought the house in December 2000, and after some grants and such, it was restored as the town’s history museum. 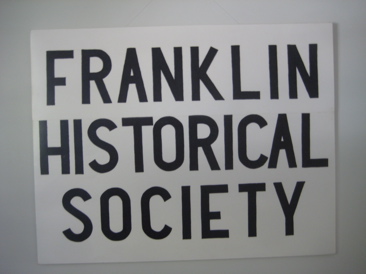 Now, museums such as these have had a rough go of it these last several years, but this place has done what it could do through the economic downturn. There are plans to do more, of course, and no one during our visit seemed to be in too much of a rush.

Such is life in Franklin.

Who wants to learn some stuff about the history of Franklin? There is a long telling of its governmental history here by a Marjorie Robbins if you are so inclined. I’ll just give you the good stuff…

In 1663, one John Ayer of Haverhill, Massachusetts, bought approximately 300 acres of land from the Indians, – as much, according to legend, as he could walk around in a day. His was the first permanent settlement in the area and this land has never been out of the Ayer name, having been passed in direct male descent from father to son for ten generations. Two more generations are in waiting. 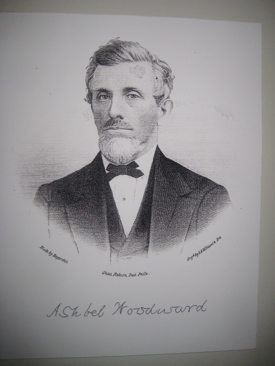 I have to interrupt to give a rather odd fact from this article: “The Ecclesiastical Society in most early New England towns was the governing body and all white males 21 years of age or over who could read and write could belong to it and were expected to do so. This Society existed in Franklin until 1945 when it was dissolved.”

Wow. I don’t even have to provide my typical smarmy comments. (Of course, Franklin today is about 98% white, so I don’t think this was even at issue in the early 40’s.) Anyway, back to the story of Franklin, again, just pulled from a much longer article so it won’t really make sense. 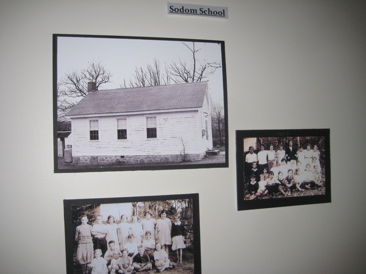 In March 1782 the Rev. Samuel Nott, a Saybrook native and Yale graduate became the third pastor after several other men had preached for varying lengths of time without receiving a call. Dr. Nott wrote in his diary that the Society was made up principally of “respectable farmers of peculiar character” who had dismissed two pastors (all they ever had) and that he had no particular wish to settle among them or any expectation that they would wish to have him do so. They did extend a call, however, which he accepted. He later confided to his diary that the “injudicious conduct” of many of his parishioners led him to believe that he was doing little good, but that if he left them they might never be able to secure another pastor.

This great and good man served in Franklin for 72 continuous years, establishing a national record. Considerable detail on his pastorate and early life is set forth in this writer’s history of the Franklin Church written for its 250th anniversary. 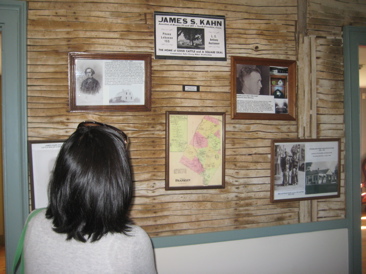 I don’t know what half that means, but I think this is probably Franklin’s top claim to fame! “Hear Ye! Hear Ye! We had the longest continuously serving pastor in the country!” At any rate, Nott and Dr. Woodward were friends.

An inordinate amount of legislative energy was spent on roads and bridges. It was craziness with their roads and bridges from 1700 through 1980. Just so you know. Skipping about 40 paragraphs ahead… 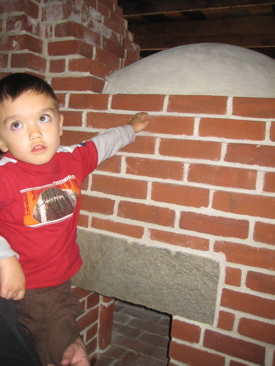 Then came the hurricane of 1938. Floods and destruction everywhere. The Sodom School practically destroyed. Roads blocked. Others washed out. Bridges gone. Church severely damage. Who will ever forget it? Brains and brawn, courage, foresight, not to mention money were needed and provided in this and all the hard-hit towns in the area that life might be resumed with a degree of normalcy.

Well, duh. You name a school “The Sodom School” what do you expect? The crazy-long history goes on to talk about a big lawsuit Franklin filed against a Ralston-Purina mushroom farm which now that I write this sentence, wasn’t very exciting. As you’ve gathered, there hasn’t been too much excitement in Franklin since… since forever. 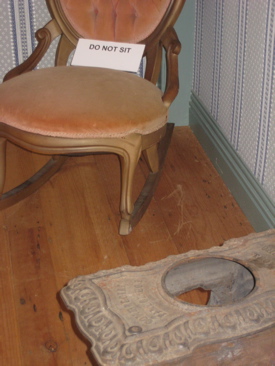 Once again, the museum volunteers seemed rather surprised to have a little non-Franklin family stop in for a visit. At least we had the excuse of a fair up the road that we were heading to right afterwards, so it didn’t freak them out too much.

As I noted, this is an in-progress museum and while that may be the case, there are extensive artifacts and informational displays about Dr. Ashbel Woodward. The good doctor was born in Willington, CT and was educated at Bowdoin College in Maine. He settled in Franklin in the 1830s in the house that is now the museum. He was the town physician for 56 years (apparently, men stay in professions a long while in Franklin), as well as an active local historian, antiquarian and author on a number of subjects. 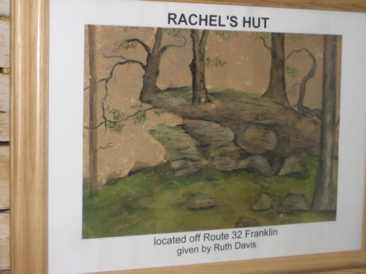 He was also a Civil War veteran and author. Woodward lived in until 1885 and by all accounts, was quite the Renaissance Man. He developed a bunch of revolutionary surgical procedures and as surgeon of the 26th CT Regiment during the Civil War, he participated in the siege and capture of Port Hudson, Louisiana.

As a historian, Dr. Woodward collected and studied Native American artifacts and in 1878, his definitive monograph on “Wampum” was published. He contributed about fifty papers to the New England Historic-Genealogical society. And this, as I’ve said, was his house. During our visit, and apparently this has been the case for quite some time (again, this is apparently a Franklin thing) The Woodward Museum’s main exhibit was “Sowing the Seeds of Promise: The Franklin Educational Experience.” The exhibit focuses on the history of education in the Town of Franklin and features images and documents relating to the subject. There was nothing all that new to me at all, but hey, this is me we’re talking about.

Randomly, I did enjoy the display about Franklin’s first gas station. No, I’m not kidding: 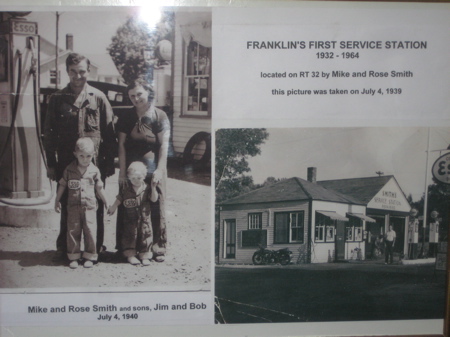 Awesome. NOW do you have a better idea of what kind of town Franklin is? Good. One cool thing here is painting by Dr. Woodward’s daughter-in-law, Mrs. Sarah Day Woodward. It shows two well known Franklin scenes (“well known” is a relative term, obviously). They are Rachel’s Hut and Giant’s Grave. Rachel’s Hut is apparently across the street and up the hill (if I were alone, I’d have gone off in search of it… And probably will someday). Rachel, a Native American woman, would come up from the Stonington area, build a lean-to shelter of saplings against a rock and spend the summer there gathering herbs and roots to take back to her tribe. She also earned a little money cleaning the Franklin Congregational Church. Unfortunately, I can’t tell you anything about Giant’s Grave. Update: See comment below.

I must note that, like almost every smallish town history museum, the old post office wall thing with slots for mail is here. It’s a rule, apparently: 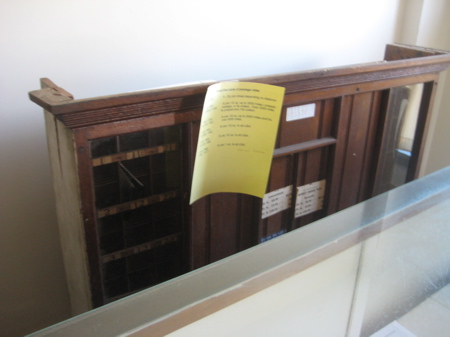 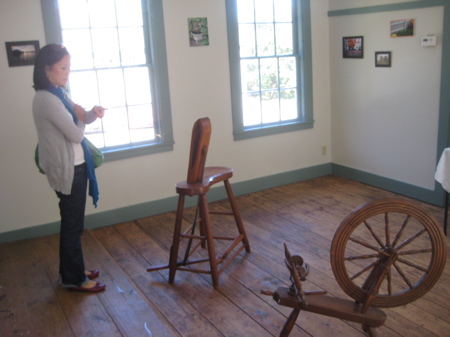 And that, my friends, is pretty much that. The folks we ran into at the museum were super nice and rather excited to have us there. Damian was not so excited, however. And when I told the guy that the massive chestnut tree near the parking lot was the highlight for me, he sort of scoffed. But seriously, look at this thing! It simply can’t be an American Chestnut, but how is there a hybrid this large here? I don’t know… And maybe it IS the largest remaining American Chestnut tree in the world but due to its being in Franklin… No one knows about it. No one knows. (Or, more likely, it’s not even a chestnut tree.) 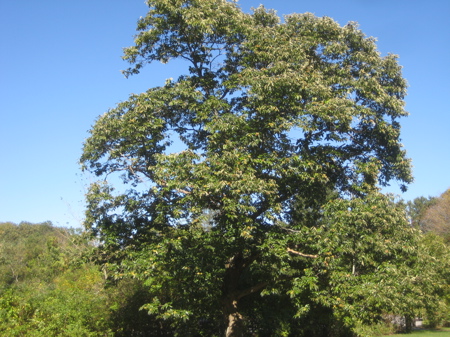 I’m telling you, this thing is a chestnut tree. (The docent DID say I wasn’t the first to remark upon it and that others seemed impressed by it as well. So there.) 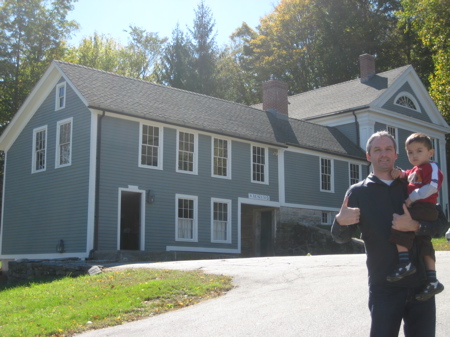 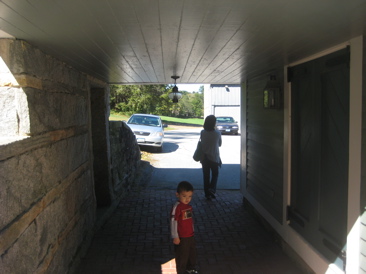