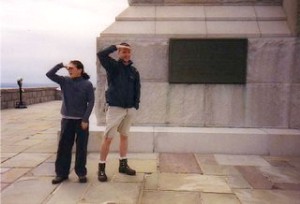 Half the fun of highpointing for me is all the planning that leads up to the actual climb. After the delirious excitement of Jerimoth Hill, I could hardly wait to lead our assault on ascent number two. Originally, I had planned for it to either be Mt. Greylock in Massachusetts or Mr. Frissell in my homestate of Connecticut. But I changed my mind only a week before our trip. The highpoint of New Jersey, cleverly called High Point in High Point State Park, is probably one of the most easily accessible ones in the country. Not only can one simply drive to the (almost) summit, it is only a few miles off of Interstate 84. And so, around 9:30 AM under perfect conditions (55 degrees and sunny), Hoang and I left New Britain…

The two-hour drive was rather uneventful as I-84 wound its way southwest almost straight to our goal. Aside from the unusually large number of motorcyclists on the road, the fully intact dead coyote (wolf?) on the shoulder, and the beautiful views of the Catskills to the west, there was nothing much memorable at all. At the state line between NY and NJ, we took exit 1 onto Route 23 which took us 2 miles or so up the lower slopes of the hills surrounding High Point. A left turn into the park, which was designed by Frederick Law Olmstead’s son, led us to an empty parking lot at the (closed) Nature Center. I would much rather hike to as many summits as we can, rather than drive, which is a plan I hope to adhere to as much as possible. With the sky now overcast I threw on my daypack, Hoang laced up her new boots, and we set off down the Monument Trail. 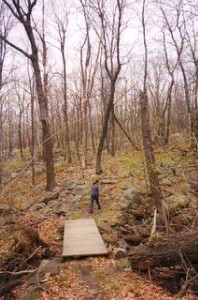 When I say “down the Monument Trail,” I truly mean down. I picked a rather circuitous route, taking us down the rocky mountain trail and ultimately about a mile north of the summit – only to come back south and up to the top. The mixed deciduous/coniferous forest offered a somewhat different scene than we are used to at home. The trees were all slightly smaller than one would expect at this latitude and altitude, as we were on the windward side of the unprotected ridge. The trail wound its way through rhododendron, cedar, whate pine, oak, and blueberry bushes and offered great views of the Catskills to the northwest. Huge hawks soared mere feet above our heads, riding the updrafts with minimal effort.

The park is rife with a maze of trails and once we linked up with the Cedar Swamp Trail, the scenery changed to one of a dense cedar stand (Hoang desecrated nature and plucked a few sprigs to stick in her dresser) in a (you guessed it) cedar swamp. This is apparently one of the last remaining true cedar swamps in the northeast and it definitely has a primordial look, smell, and feel to it. A 300-yard stretch of wobbly puncheons provided the only small challenge of the day and gave us a pretty cool photo opportunity.

After trekking a bit further northeast, we linked up once again with the Monument Trail and immedidiately turned southwest towards our goal: the highpoint monument on top of the ridge. The climb was a little rocky and steady, but only about 3/4 of a mile long. We saw our first few people of the day – which had now become much windier, cooler, and grayer than wehen we set out a few hours earlier from home. (It must be said, for future reference, that the week before this hike saw record high temperatures in New England up into the 90’s but that it snowed this very night back in CT.) The first guy we passed was eager to discuss the strange weather we’ve been having but I couldn’t have cared less and we trudged right past him, ignoring his boring attempt at conversation. 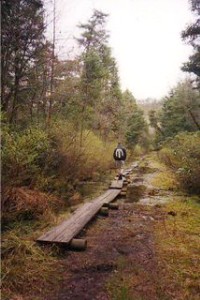 We were now up on the ridgeline, with views both to the west and to the east. I learned that the ferile glacial valley to the east, known for it’s rich black soil, is home to the largest onion farming industry in the country… And that’s why I climb highpoints. If one needs a constant reminder of one’s climbing goal, NJ’s highpoint is perfect. A 220-foot obelisk that can be seen for miles down in the surrounding valleys marks the summit. Once we reached the parking lot and picnic area at the summit, it was only a short walk up to the monument. A 360-degree view of the area was the reward for making the trip, including the Poconos and Catskills in the distance. The tower has been closed for a few years now, but the views are still very nice and worth the effort. We finally got some woman to snap our picture after she kept insisting our lighting was all wrong blah, blah, blah and set off straight down the hill to my car.

Before heading home, I needed to stop in the park headquarters and walk a bit on the Appalachian Trail, which skirts the other side of the ridgeline we hiked. Some old guy bought powerball tickets at the headquarters, which I found very strange. A quick stop at Dairy Queen (which apparently sells actual food along with their ice creams… Though the plain toast with our chicken strips was rather odd) and a fill up at NJ gas prices by the Sikh with no business next door to two other gas stations with long lines and the same prices, and we were on our way home. Despite the 45 minute traffic jam on I-84 near Danbury, CT, we got home safely, showered, and headed out to my mother-in-law’s 61st birthday party where everyone was oh-so-jealous of our day’s adventure. 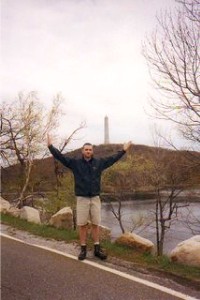