CTMQ > Everything Else > National "Stuff" > NHL: A. Everett Austin House

A. Everett Austin House
National Historic Landmark
130 Scarborough Street, Hartford (Empty, Private – Donate large to the Wadsworth and get inside)

I love this one. I loved learning about this quirky house a year ago when completing the Wallace Stevens Walk (Here). I loved learning more about it during my tour of Philip Johnson’s Glass House and speaking with some guy who had actually lived in it for a little while. And now I come to learn that it is actually a National Historic Landmark? That’s crazy. 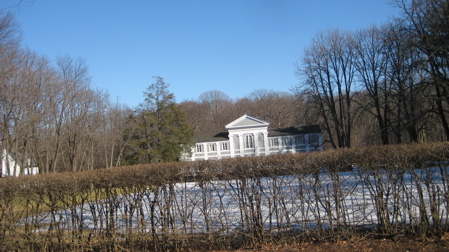 It’s crazy because the house, set far back from the busy-ish Scarborough Street – a street full of very large, very beautiful and classic Georgian, Victorian and Colonial homes – is often mocked by those who don’t know about it. Ask anyone under 40 around Hartford what the “Hollywood House” is and they’ll point you here. The legend is that it’s a fake house – just a façade. Or maybe that the façade hides a really ugly house behind it and it was thrown up by property-value minded neighbors.

But the fact is, the house has an incredibly rich story and interesting past…

The house was the home of Wadsworth Atheneum director Arthur Everett “Chick” Austin, Jr. Chick Austin built the house in 1930 after seeing the Palladian Villas of the Veneto on his honeymoon. In the 1930s it was a gathering place for leaders of the international art world, including Salvador Dalí, Alexander Calder, Gertrude Stein, George Balanchine, Le Corbusier, Cecil Beaton, Martha Graham, Agnes de Mille, Aaron Copland, and Virgil Thomson.

After Austin’s departure from Hartford in 1946, Helen Goodwin Austin remained in residence. In 1985, she and her two children, David and Sarah Austin, donated the house to the Wadsworth Atheneum. It is among the homes featured in Bob Vila’s Guide to Historic Homes: In Search of Palladio, a six-hour A&E Network study of the work and influence of the Renaissance architect Andrea Palladio. It was declared a National Historic Landmark in 1994.

The next two paragraphs contain a bunch of architectural terms I’ve never heard of in my life, but it also explains why this goofy house is so unique. Enjoy:

The house, only one room deep, is long and narrow, 86 feet in length by 18 feet in depth. In the front elevation, the central three-bay pedimented pavilion is flanked by four-bay wings. The bays are defined by shallow, two-story Ionic pilasters. The walls of the pavilion and wings are in the same plane, since the pavilion does not project. The planar effect is emphasized by the wall sheathing, which is flush boarding, tongue-in-groove. The twelve flat pilasters rise with entasis from bases of double torus moldings to stylized Ionic capitals. Two string courses, one at first-floor ceiling height, the other below second-floor window sills, establish a horizontal orientation to balance the strong upward thrust of the pilasters. 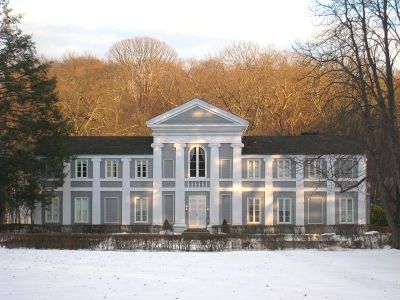 Four stone steps lead up to the double front door in the central bay of the pavilion. Above the door, a balustrade is suggested by half-round, vase-shaped balusters applied to the spandrel under the tall, double round-arched window. First- and second-floor windows in the flanking bays of the pavilion are blind. Windows in the wings are double casements, four panes high at the first floor, three at the second; two are blind at each floor. The pavilion pilasters support a plain architrave and pulvinated frieze. The pediment above is without embellishment in its tympanum, and is wider than the cross gable behind it. The entablature continues under the eaves of the cross-gable roof.