Circle the Wagons and Check it Out
East Granby (Google Maps location)
June 9, 2012

I’ll be honest up front: The most interesting thing about this museum was not the museum at all, but learning that a trail connects the museum/town complex with the Metacomet Trail high up on the ridge to the west. The museum sits in the rather nice-looking town-owned complex. Just over the Metacomet ridge lies the fantastic cultural resource and museum – the Old Newgate Prison and Copper Mine. Just to the east of this small museum is Bradley International Airport and the excellent cultural resource and museum – the New England Air Museum. 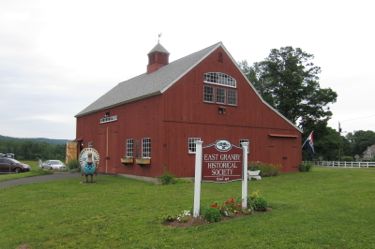 Anyway, I sat outside the museum on this, my first museum visit during 2012’s Connecticut Open House Day and stared across the green fields and up at the Metacomet Ridge. It was a lovely panorama. But I had a town history museum to get to, one that is rarely open, so I popped inside the restored historic barn and began to poke around. 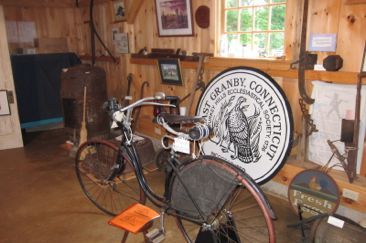 This, like many small town history museums around the state, is a small museum. But it is well-organized and does really focus on the thing that makes East Granby so East Granby: Farming.

This area, first settled in 1664, was one of four Congregational parishes in Simsbury. The Turkey Hills Ecclesiastical Society in 1786 became a section of Granby, and in 1858 was incorporated as the Town of East Granby. 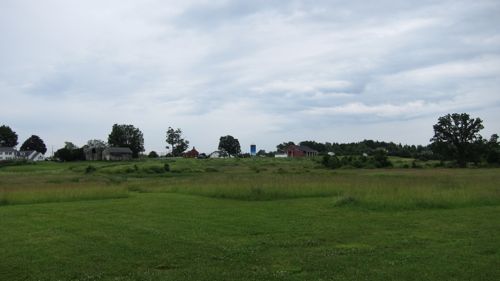 So East Granby is one of Connecticut’s youngest towns. I did not know that. I’ve already mentioned that I’m aware of the Metacomet ridge that cleaves the town, but let’s see what the historical society has to say about that:

An unusual geographical feature, a basalt ridge dividing the Town lengthwise, has had considerable influence upon its character.

That’s it? That’s all you’re going to tell me Historical Society? How did it influence the town’s character and while we’re at it, how would you define that character? Sigh. 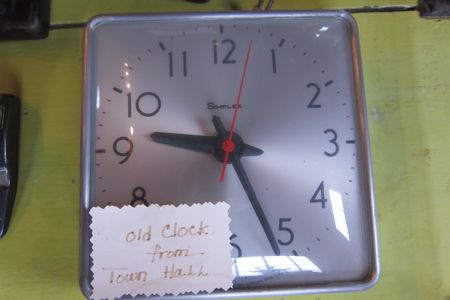 The first incorporated copper mine in America was on the western side of this Talcott Range. The mine subsequently became Newgate Prison, a Revolutionary War jail and the first state prison in the United States (1790).

And wouldn’t it be great if the DANG PLACE WEREN’T CLOSED AND FALLING APART SINCE BEFORE I STARTED CTMQ IN 2006?! And it’s sure nice that Newgate finally reopened in the summer of 2018!

Farming has always been the mainstay of the town. The early twentieth century saw local farmers specializing in dairy products and tobacco. The number of operating farms diminished as the population of the town increased from 838 in 1858 to 5500 in 1990 but the rural character of East Granby remains.

The showpiece of this museum is undeniably a regal yellow carriage. This is the Old Concord Coach, and it’s beautiful. The following is from the society’s Facebook page: 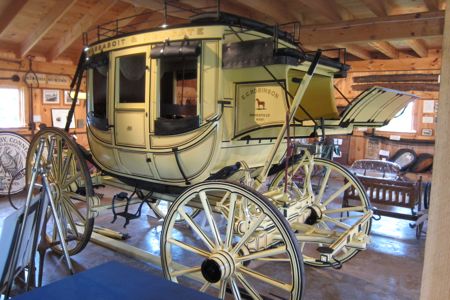 In 2008, the Society funded restoration of an 1847 Concord stagecoach, one of the oldest Concord coaches in the United States. It was built by the Abbott Company in Concord, New Hampshire around 1847. The coach was purchased at auction in 1918 by Almon Phelps of East Granby, who owned Old Newgate Prison at that time, and who used it as a historical prop. It was given to the Suffield Historical Society in 1964, who eventually gave it to the East Granby Historical Society in 1996. The restoration was performed by Hansen Wheel and Wagon Co. of Letcher, South Dakota. It was returned to East Granby in December 2008 and is now proudly displayed, in renewed 19th century splendor, at its home in the Historical Society barn. 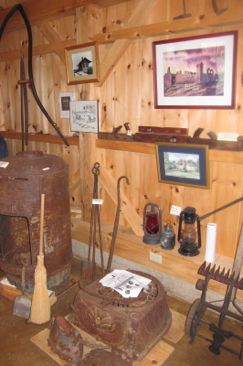 The docent during my visit could not effuse enough about this thing. About how it was shipped to South Dakota and how Hansen Wheel and Wagon are the best in the business. I’m not sure how much competition there is for this sort of thing, but to me, they did a great job. And these things are not cheap. I found the Hansen website and skimmed around. I got bored pretty quickly, but hey, if you’re reading this page then there’s a decent chance you’re here for the Concord Coach. From what I gather, people visit the East Granby museum just to see it.

My only lament is that it was too big in too small of a space for me to take a half-decent picture of it. Oh well. 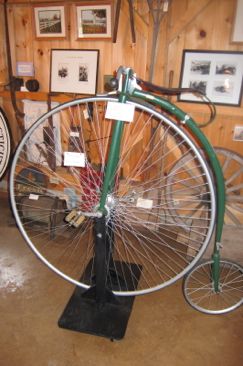 The museum seemed to be showcasing old bicycles and engines in mid-2012. I dig old bikes. Old engines? Not really. I’m going to say this is a Penny Farthing, because it’s the only old-timey bike name I know. And it looks like a Penny Farthing to me.

You’ll note in many of my pictures the old farm equipment hanging on the walls. For someone like me, who has seen a billion of these things over the years at various museums, I sort of don’t even notice. But if you’re from north central Connecticut and you don’t get around as much as I do, go check them out. 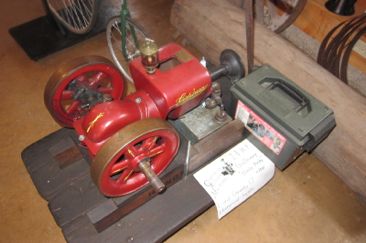 The early vacuums and stoves and chamber pots and heating devices are all here as well. But you expect that by now.

I always do enjoy the “old home” displays, with old home remedies and quackery and cooking implements and such. Does East Granby come through for me? Yup. In spades. 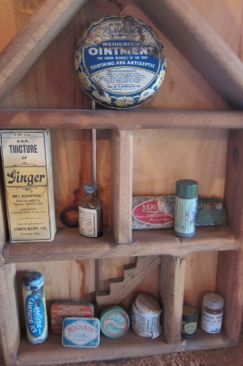 You know how every town has a “Constitution Oak” or some such oak related to the Charter Oak of Hartford. Well, credit to the East Granby Historical Society for laying it all out there.

They have a Constitution Oak too. It has a plaque and everything. But it’s a pin oak, and the Charter Oak was a White Oak. So what’s up?

In 1902, Connecticut was going to draft a new constitution. Delegates were given small pin oaks to mark this momentous event. East Granby’s was planted (corner of School Street and 187). Yeah, well, the state never passed a new constitution and most trees were just randomly planted here and there.

But not East Granby’s! It still has a plaque, denoted what was essentially nothing other than a free baby pin oak. I love that story – and wonder how many towns celebrate their Constitution Oaks from 1902 without breaking down the truth behind them.

For this, I now love East Granby.

Oh yeah, we’re in tobacco-land, so there is also, of course, an old tobacco rolling machine and a display of old tobacco products. To this very day, I drive by working tobacco farms in Windsor – something which still surprises people not familiar with the area. 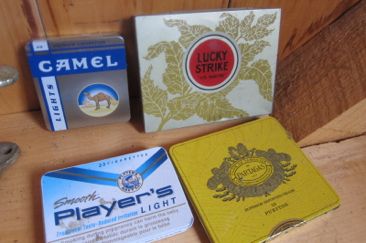 A few times, on flights back into Bradley, the pilot will say something like, “those farmed fields of green below with the billowing white covers are tobacco fields.” Gasps of confusion erupt throughout the cabin.

Then I stand up and note the 18 museums everyone can visit to learn all about the Connecticut River Valley’s rich tobacco farming history and how our broadleaf stuff is used in the best cigars in the world to this very day. 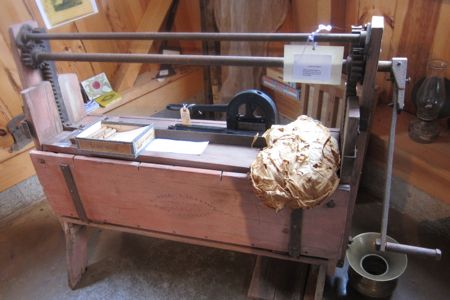 People love when I do that*.

*I don’t actually do that.

One last thing, putting the East Granby Historical Society Museum in the pantheon of other Connecticut town history museums: 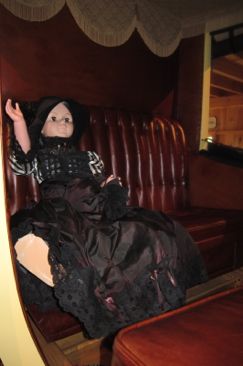 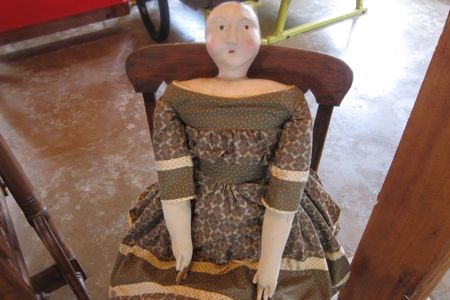