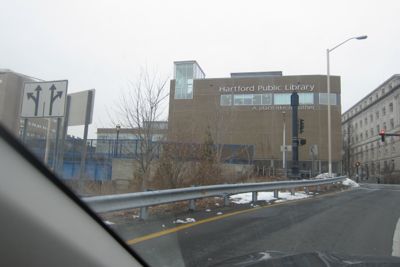 I have a few pages that concern libraries here on CTMQ. More than a few, actually. Not all are about those which contain museums or museum-like places either. I’ll let you poke around and find others if you’re interested.

Ah, what the heck. Here are a few, like the (supposed) oldest public library in the US, the incredibly beautiful Beinecke Library at Yale (my visit), and I’ll give you two with a little museums inside – a fun page I wrote about the Plainville Library Museum and another one across the Connecticut in East Hartford: The Edward E. King Museum.

I’d imagine most people who read this website have some affinity for libraries. Or you used to before you had the ability to own your own library in your pocket. For me, still, I enjoy wandering semi-aimlessly through libraries and stumbling across titles or movies or magazines that catch my interest.

Pro-Tip: Park in a garage in West Hartford and take out a book at the nearby library, get your parking validated. 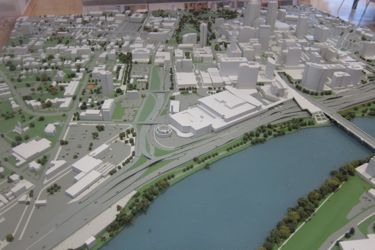 But this page isn’t about wandering aimlessly or about West Hartford, no, this is all about the downtown Main Street main branch of the Hartford Public Library.

The fact that the library spans both the underground (via engineering) Park River and the Whitehead highway is, indeed, a fact. The “fact” that it is the only library in the world to achieve such a feat is, rather, a bit of truthiness. I feel like it must be true and no one has proven otherwise, so therefore it is a “fact.” With airquotes.

This true fact muddled with my own truthiness “fact” is sort of what actually brought me to the library when it did. Aside from the aforementioned Hartford History Center, the library also features a cool “ArtWalk,” which is a gallery located in front of large glass windows that look out upon downtown Hartford. 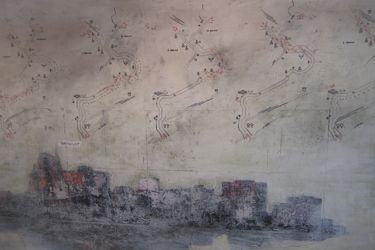 The exhibit I was keen to see was “Hog River Revival” – an exploration of Hartford’s famously buried Park (aka Hog) River; the very river that is buried under the highway that runs under the library. Got that? And yes, that’s where all these pictures that have, perhaps, confused you up until this moment.

So let’s go back… back to a time when the Park ran free through pre-Bushnell Park and and pre-Pulaski Circle and pre-Whitehead Highway. Back to when the Hartford Library’s beginnings. For that, here’s my edited history taken from the library’s About page. http://www.hplct.org/about/library-history So many names mentioned appear elsewhere on CTMQ for their historical doings. 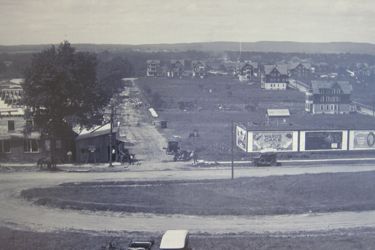 The institute’s lecture series was well attended for a number of years. Guest lecturers included Oliver Wendell Holmes, Horace Greeley, Dr. Horace Bushnell, Rev. Henry Ward Beecher, Samuel Clemens, Charles Dudley Warner and Ralph Waldo Emerson. But, by the late 1870s, the popularity of a lecture series began to diminish and the institute noted: “We have a library, not an institute; its members are, at least half of them, ladies; and the men belonging are old as well as young; being therefore, not alone for the young, not alone for men, and not an institute but a library, it seemed time to call it by its right name.” In 1878, the private institution applied for a name change and became the Hartford Library Association.

I particularly enjoy the pragmatism of that last bit. 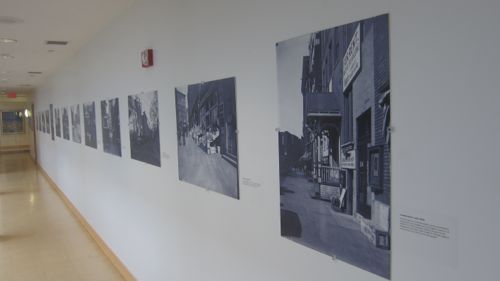 By the late 1800’s, the people wanted a real library separated form the Atheneum. Time for some more famous names:

Well, it is a very nice building that somehow meshes with the Federalist municipal building next door, sprawling Wadsworth 2 blocks away and the nearby historic houses of Main Street – despite being a modern steel and glass building.

Now that we’ve caught up to 2013, let’s go inside and check out the joint. HPL is somewhat infamous for providing warmth and intellectual entertainment for the city’s vagrant population. Bathrooms become washrooms and reading chairs, beds. This problem is certainly not unique to Hartford, but since it’s Hartford, we hear about it more often. 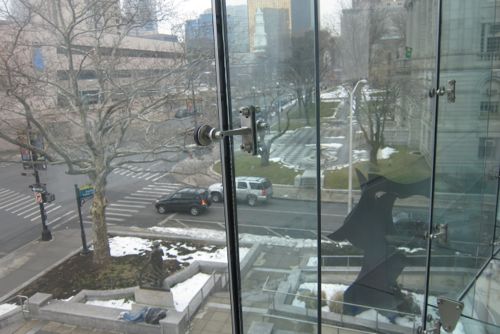 I visited on a cold and blustery day – prime time for the homeless folks to gather – and reality turned out to be far more benign than the stories. Sure, there were some questionable cats lounging around, but I didn’t see anything untoward. Note: I didn’t go in a first floor bathroom.

Instead, I made my way up to the 3rd floor where the ArtWalk and History Center are. Up first, an impressive exhibit of archival Hartford photographs from about 1900 up until 1930. Of course, we all love old photos, but the History Center has done a great job of putting the pictures into the context of modern Hartford.

In some cases, of course, modern times haven’t completely destroyed the past. Efforts were made to “involve the kids” with silly questions about the pictures, but I can’t really see kids spending too much time in this out of the way hallway.

The exhibit was a first look at the library’s major effort to digitize and make available over 1000 historic pictures of Hartford made on glass-plate negatives and held in the collections here.

One particular collection involved pictures from Mulberry Street. Well, frankly I don’t remember if the pictures were from the now disappeared Mulberry Street or that’s the name of the exhibit, chosen because it is disappeared. Regardless, Mulberry Street ran where IM Pei’s greatest embarrassment, the Bushnell Towers now stand. 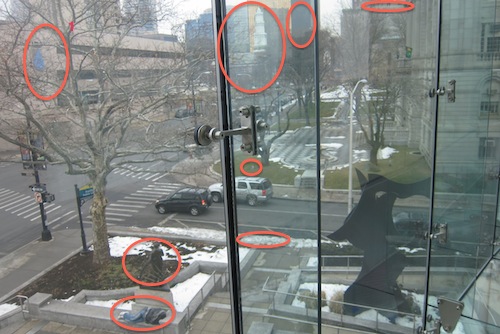 There were other bits and pieces of things like how Hartford has always celebrated with a Winter festival of some sort. It’s all well done, but I was here for the Park River. 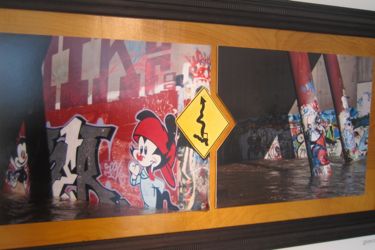 Over the years, I’ve read about the guys who make sport of running the Park – sometimes at odds with the city, but it appears that while it’s not officially sanctioned, anyone with the cojones to paddle down pitch black storm drains under a capital city can go ahead and do it.

This exhibit is all about that journey. With maps! I’ll let them explain:

The Hog River Revival Collection is about adventure.

There’s no place on earth that you can’t map. The Park (Hog) River, encased in over 9 miles of concrete conduits, is America’s largest underground waterway. Over the course of 18 months, Joe McCarthy and Peter Albano traveled the underground river in an attempt to map, document, and spotlight Hartford’s darkest passage.

The Hog River Revival Collection is the result of those trips. This body of work was created by combining narrative aspects of documentary photography with romantic expressions of being underground. Albano and McCarthy combined their experiences in filmmaking, photography, printing, and painting to capture a fully realized sense of space and experience of their urban exploration.

The final product is a series that relays both a realistic record of the physical space, as well as an autobiographical expression of the artists’ interaction with the Hog River. 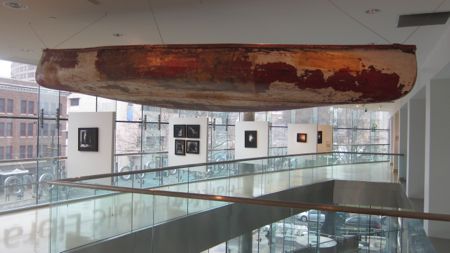 I love the whole idea of this. You can search around online for accounts of the relative few successful Park River runs. It’s most certainly on my CMTQ Holy Grail list – you’d think I’d have contacted these guys by now. Park of me wants to attempt it on my own – but then I remember I’m 40, have kids, and I’m not dumb.

I found the claim that the Park is America’s largest underground (engineered) waterway a bit dubious. So dubious, in fact, that it helped plant the seed for me to start a new page about dubious Connecticut claims, here. 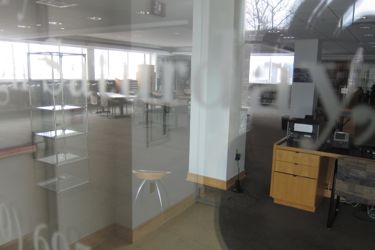 The Park actually still runs right underneath the library, which is a bit of symbiosis that I very much enjoyed while looking out onto the Hartford downtown scenes out of the floor to ceiling glass walls.

About the actual History Center… it wasn’t open when I was there. But I got a good look inside and quickly determined it wouldn’t qualify as a CTMQ visit anyway. I do have a friend that works there part time, which qualifies it as awesome, but a museum? Nah.

However, there IS this:

The library’s Hartford History Center has the original 1797 catalog in its archive and holds more than half of the original 700 volumes.

I’d be remiss if I failed to mention that there are other art installations throughout the library, and apparently they change fairly often. One thing not to be missed is on the first floor – a giant Hartford mural behind the computers in the English as a second language lab. It’s great. 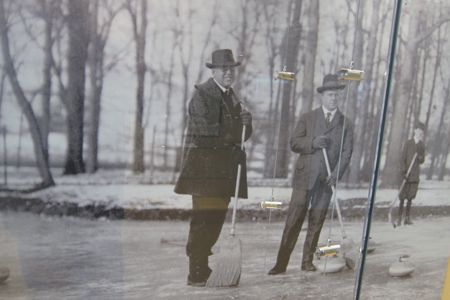