A’ight, look, Boothe Memorial Park & Museum is actually a free, 32-acre park in Stratford just off the Merritt Parkway along the Housatonic River. I find it difficult to call the place a “Park & Museum” as it is a collection of a dozen or so museums. And I know, there are other collections of museums that fall under a singular “museum” moniker, but that doesn’t solve my problem here. 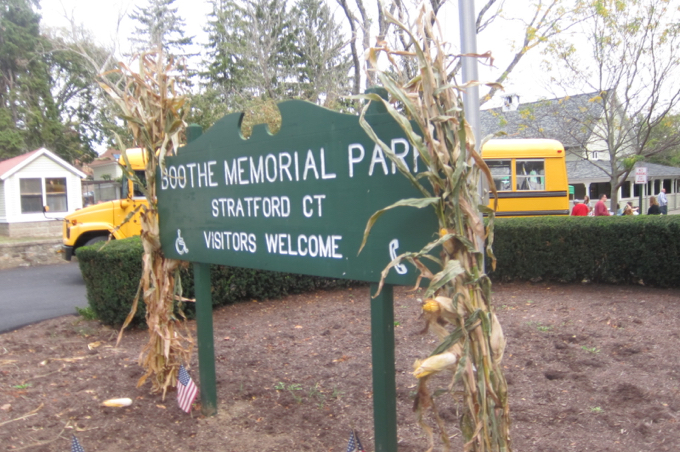 I’ve written two of the museums in the park their very own special pages. I felt that the Boothe Memorial Railway Society Museum was worthy of its place in the annals of CTMQ. Additionally, I found the Technocratic Cathedral so intriguing and unique, that it, too, received special treatment.

That leaves us on this page, with… everything else in this eclectic collection of random mishmash from the brains of two eccentric – and wealthy – brothers. Hoo boy, that’s always a recipe for absolutely nonsense – wealth and eccentricity. 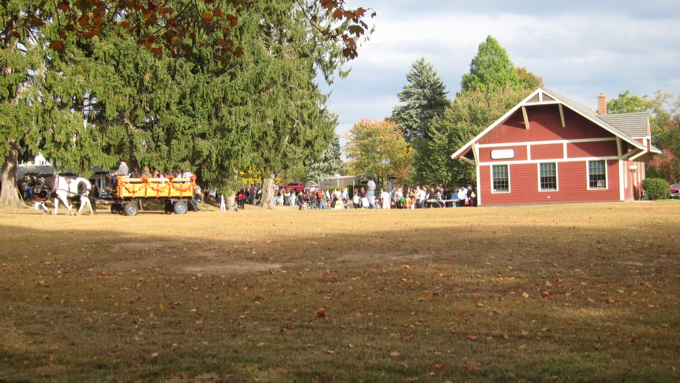 Spin Booth Memorial Park anyway you want, but it is pretty silly. Don’t get me wrong, I love it! And it’s wonderful that it has been preserved and can be (sort of) visited, but still… the Boothes were a bit loony and their collection puts that on full display. 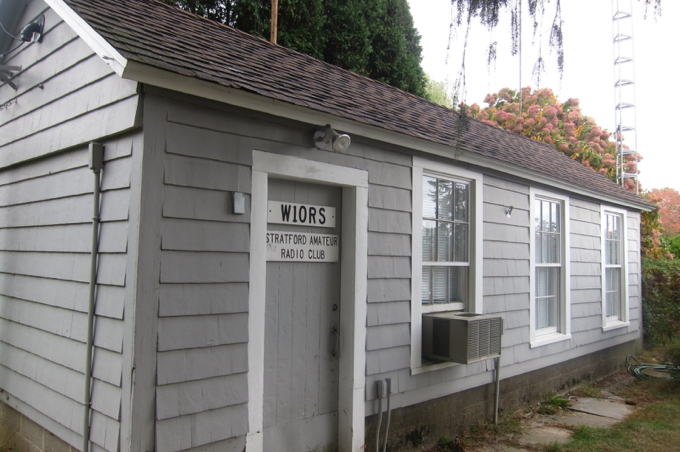 How big is the collection? The park contains twenty-eight structures, including outbuildings, which span in age from 1840 up through the mid-20th century. You’ve got Greek Revival style, Queen Anne style, Shingle Style, and Folk Architecture. This last bit is the highly individualistic eclectic style of the two brothers, David and Stephen Boothe. It is most notable in the Technocratic Cathedral. 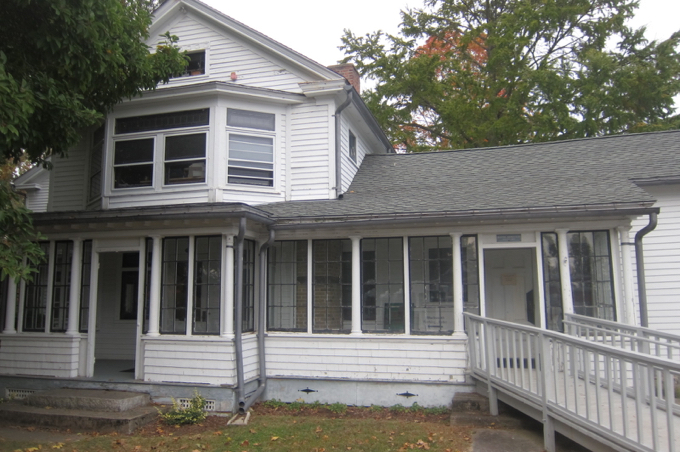 Boothe Memorial Park, was originally the farm of the Boothe family which is why the Boothe family homestead (that’s the 1840 building) is here. The Boothe brothers of the Boothe Brotherdom fame remodeled the farmhouse when they lived here in the early 1900’s, but the gist of the building remains intact. Although they did add colored glass windows with inscriptions proclaiming the house “the oldest homestead in America” which… I did call them loony for a reason. 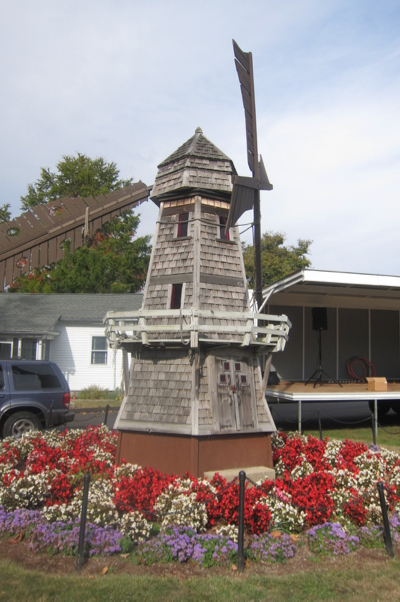 The homestead was actually built over the 17th century foundation of the homestead, so this place actually goes back to colonial America. There is a plaque here saying that the Boothe brothers added several “puzzle floors” which sounds cool, even if I don’t know what that is. Unfortunately, a lot of the “museums” here at the park aren’t open like actual museums. They are simply meant to be gawked at from the outside… except for the rare times they actually are open. 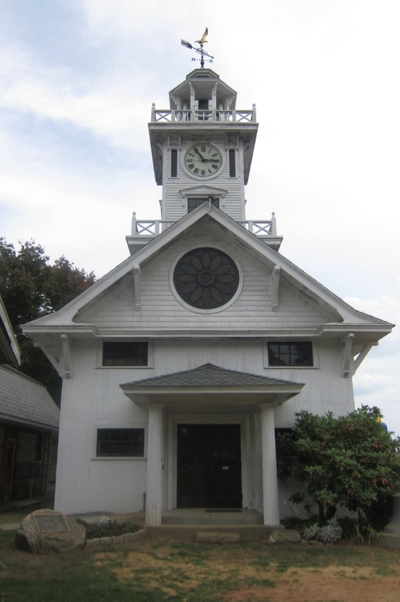 But if you can figure out when that is, you get a medal.

Let’s start with the clock tower. It had been an 1880s hay barn, until the Boothe brothers purchased a five-bell clock with Westminster chimes in 1913 from some place in Massachusetts. Supposedly, the bells chimed at random times which not only upset local humans, the hens and roosters got confused as well. The town told the Boothe’s to stop their nonsense which led to them taking out an ad in the newspaper (a thing they loved to do) proclaiming, “The Boothe brothers will no longer give the town of Stratford the time of day.”

Sick burn, Boothes. But now they had people’s attention. 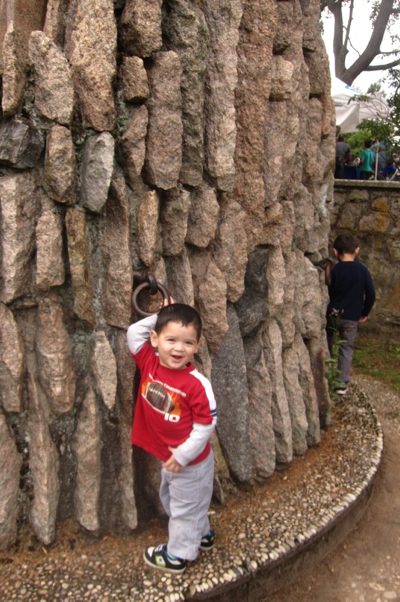 So they created a small exhibit on local history on the family farmstead in 1914 and began to evolve their estate into a complex serving a variety of purposes, including religious services, relief for the poor during the Depression, education and entertainment. All of these aspects bear the unique stamp of the Boothe brothers’ eccentric character. In 1914, David and Stephen Boothe opened their historical exhibit in the converted haybarn with its attached clock. 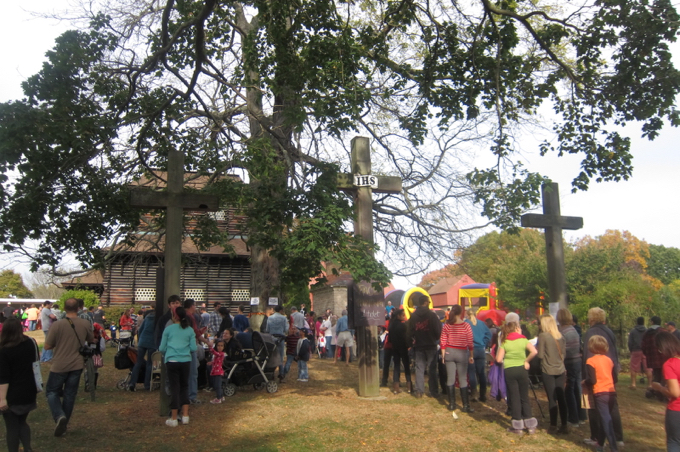 This allowed them to remodel their house, which is when they put the statement, “The Oldest Homestead in America” on several colored glass windows. Although the claim was ridiculous, the Boothes continued it as a cornerstone of their park in later years. Heck, they had planned to build a monumental granite entrance arch for the park bearing the same inscription. These guys would have loved Trump. 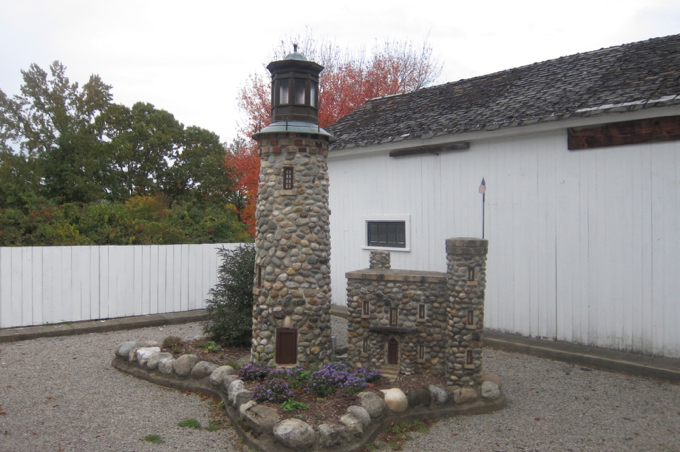 15 years later, the boys really got going. They began to add various and sundry buildings around their property. The Coliseum, the sunken garden/outdoor basilica, the organ house and the aforementioned Technocratic Cathedral. All this stuff still exists and are part of the greater “museum.”

I’m pretty sure some sort of religious services are still held here in the outdor basilica and I know for sure that people do get married in the Putney Chapel. While not original to the location, it is an old (1844) building. (It was moved here in 1968 to accommodate a new road in town.) 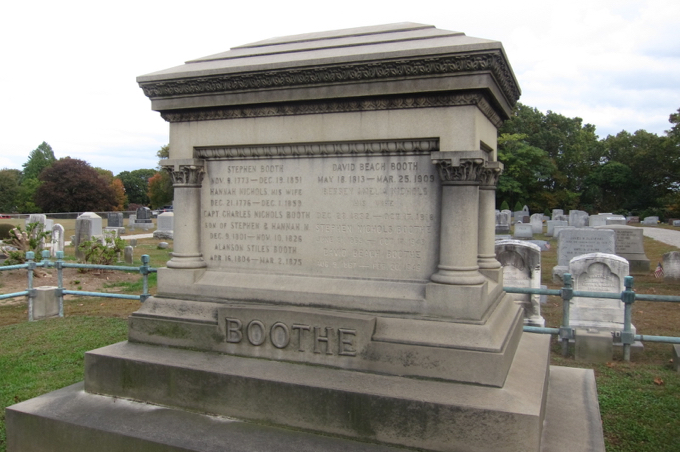 But back when the brothers were alive, they added were the present caretaker’s house, a garage, and a former trolley station. During World War II the Boothes constructed two bunkers made of granite paving blocks and one is a two-tiered structure with flaring roofs similar to the Technocratic Cathedral that stands near it. You see? These guys had style and verve. 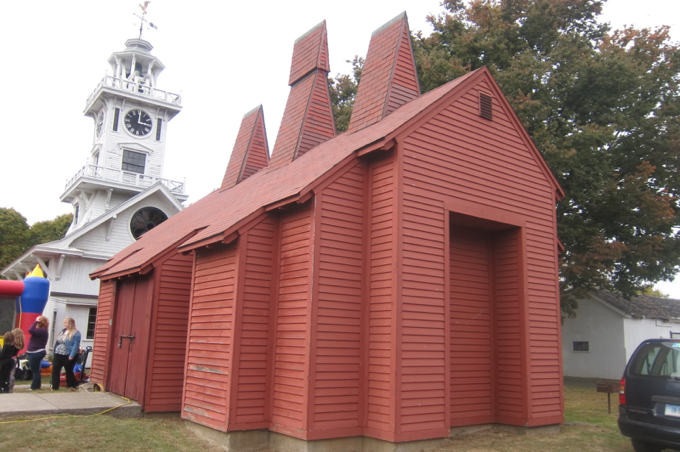 Still not convinced? Upon hearing that Henry Ford had built himself a replica blacksmith shop of the kind familiar from his 19th-century childhood, David Boothe decided to outdo the famed automaker. Whereas Ford’s shop — like most functional buildings — had four sides and four corners, Boothe designed one with 44 sides and 44 corners. Just because. 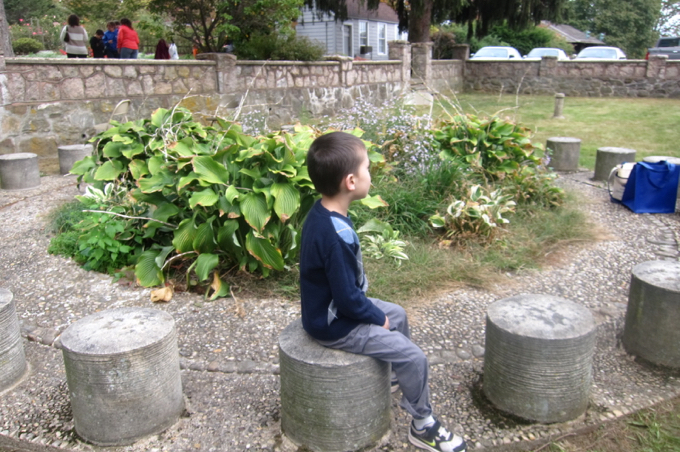 Then they died and deeded the whole place to Stratford. Leading to perhaps the craziest part of this whole story – Stratford actually recognized what they were given and didn’t ruin it! In fact, they allowed its citizens to add to the eccentric goofiness. 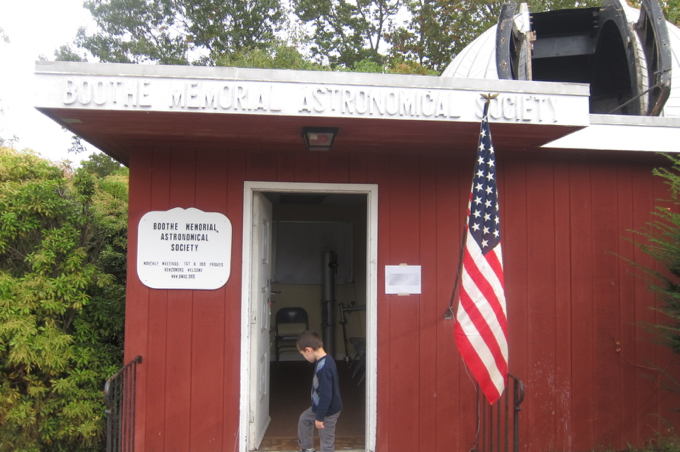 An astronomical observatory built in 1955, a greenhouse moved to the park in 1960, the Putney Chapel was moved here and the model railroad museum was built. There’s an amateur radio hut enthusiasts use. A rose garden is regularly tended. A random aviary is now attached to the old homestead. And in modern times, a playground has been added. 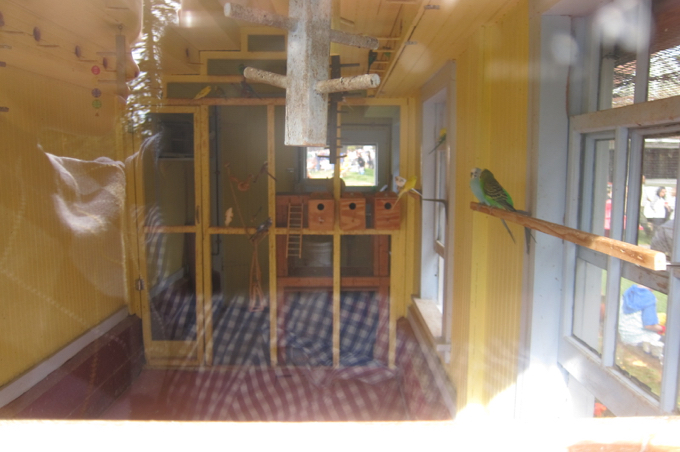 But in the end, perhaps the oddest thing that people come to Boothe Memorial Park to specifically see is the old Merritt Parkway tollbooth. Since Connecticut outlawed tollbooths in 1988, and probably destroyed them all, this is quite the thing. And even if the state reintroduces tolls, as will likely happen in 2020-something, there certainly won’t be booths. 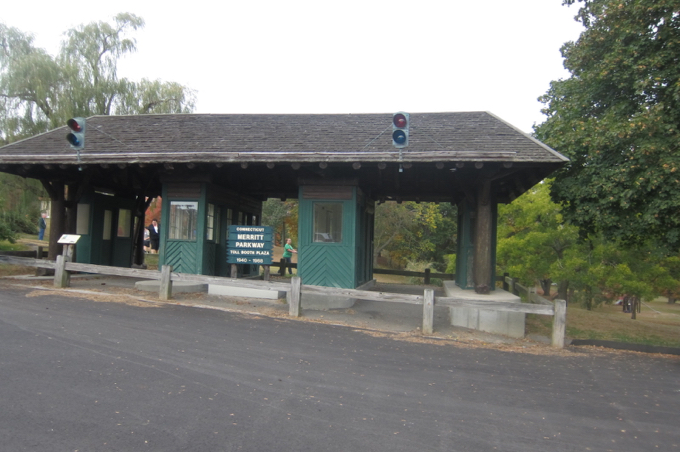 This particular booth is from Milford. There were three plazas in Greenwich, Milford, and Wallingford and they were all designed by the guy who designed all the cool bridges on the Merritt, George Dunkelberger. They were purposely made to look “rustic” and woodsy, to match the Merritt Parkway itself. 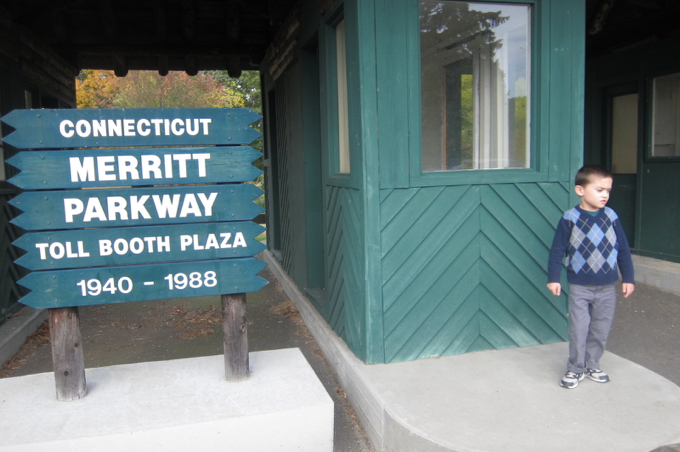 So there you have it, a toll booth at Boothe Park, created by too brothers who were against taxation (and surely tolling).

The park is free and open year-round, but again, no one can tell you if and when any of the buildings will actually be open. Good luck! 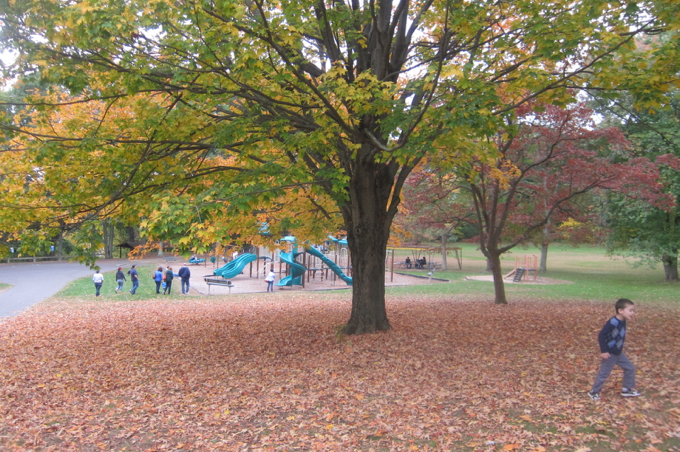