I also hate Boothe Memorial Park. How does someone like me deal with this place? There are a slew of museums here, if in name only, but I can’t feel good about writing each one up as a separate CTMQ page. Except for the ones that are “big enough,” like this one, the Boothe Memorial Railway Society Museum. 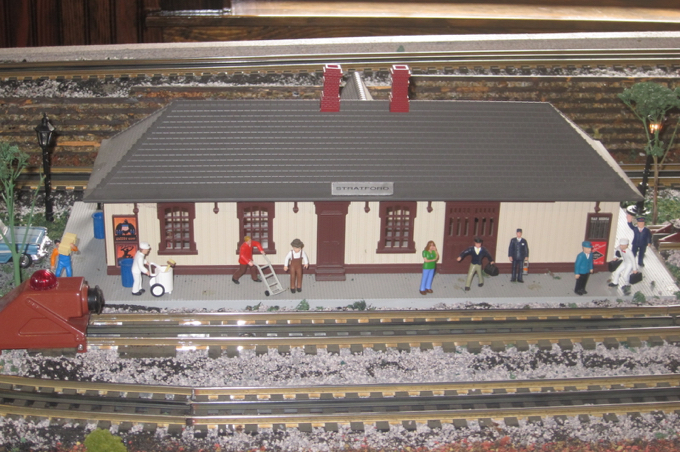 Once you figure out the confusing calculus of when the park’s museum buildings are generally open, the park is a great place to visit with the kids. Or without the kids. There’s something here for everyone, from toll-hating Boomers to two-year-olds like my son Calvin. And the model trains at the Railway Society Museum was, by far, both of my sons’ favorite building in the park.

I mean, just look at the joy on Damian’s face: 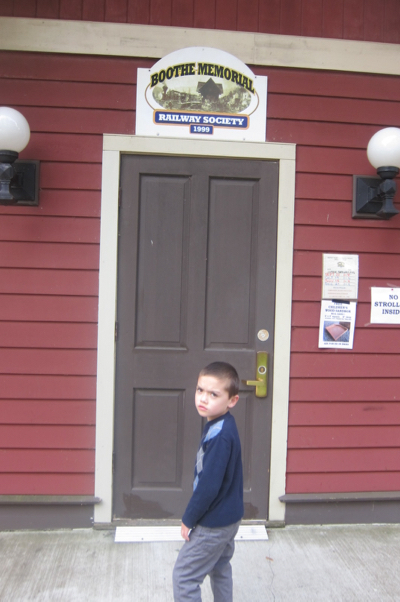 Boothe Memorial Park & Museum sits on a 32 acre site in the north end of and was the estate of the Boothe family for many generations and willed to the town in 1949 for the public to enjoy. The Boothe brothers built all sorts of many architecturally unique buildings, often interjecting their own political proclivities into the place. 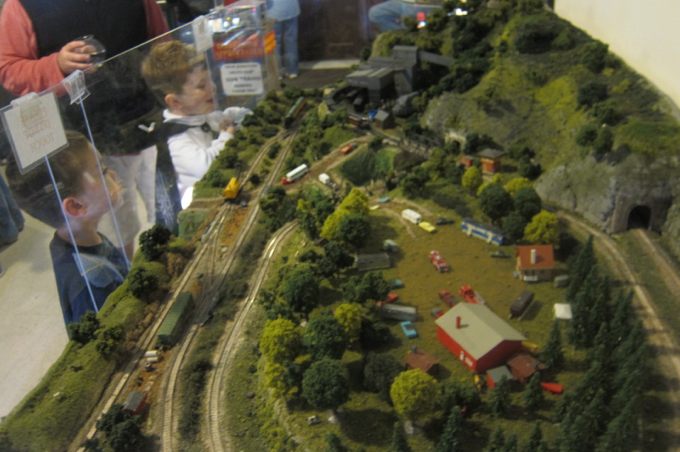 Today, the park is open and free of charge year round and is the home to various volunteer clubs and organizations – those those clubs’ buildings are not always open. I’ll leave it up to y’all to figure out when is best for you to visit.

The Railway Museum is generally open Saturdays from late spring to late summer, then the third Saturday of each month through December. (You can check their specific website at the bottom.) They also invite the public to join them for “working sessions” on the 2nd and 4th Wednesday of each month from 6:30-9PM. 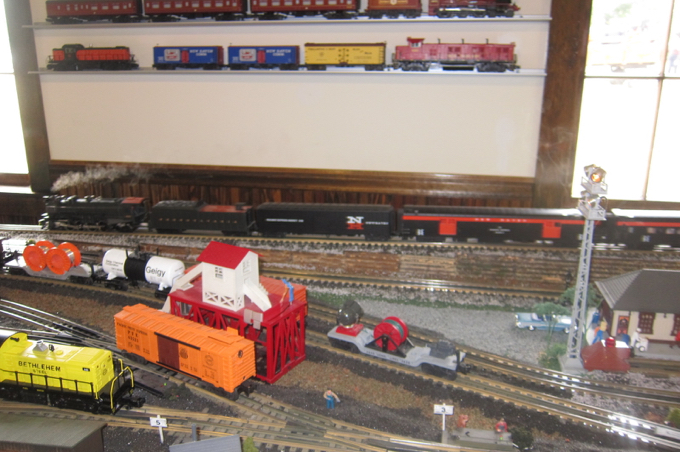 The whole thing is run by a bunch of volunteers from all walks of life who share a passion for model railroading. And they have a mission! It is “to promote an interest in model trains and railroad history, through educational projects, community outreach, and fellowship among members, thus expanding the growth and enjoyment of the hobby, and appreciation of railroad history.” 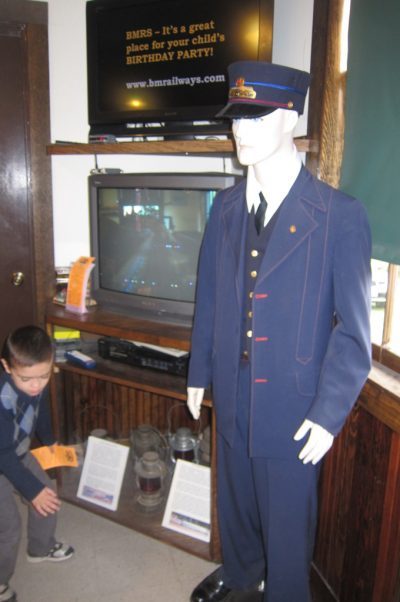 Consider the mission successful. The museum opened in 2002 with one small 12×15 layout and has grown quite a bit since. Beyond the model layouts, the museum also houses artifacts from the railroad industry. Items such as signs, flags, uniforms, signaling kits, and lights from the New Haven and New York Central lines.

This is, quite simply, one of the best layouts in the state. There are at least 12 trains running here and several different layouts. They’ve even built one for the little ones – a Thomas train carrying Sesame Street characters at ground level. 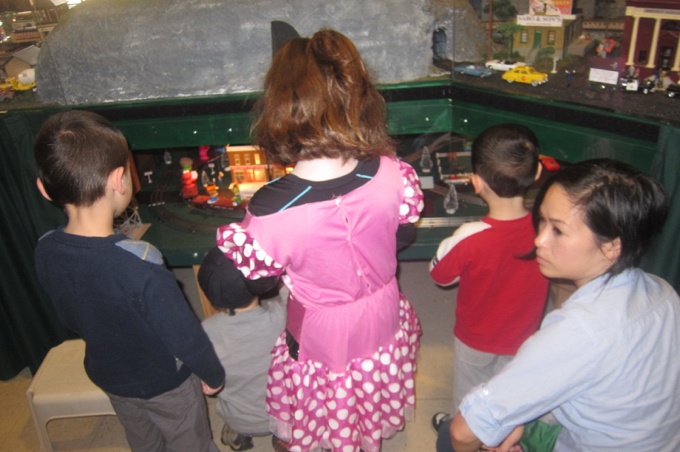 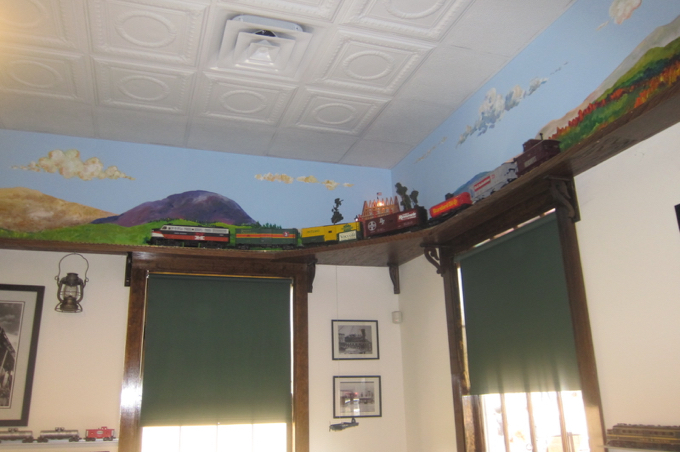 Of course the meat of the operation is at normal table height. Stools are provided for kid to gaze upon the layouts. Perhaps the most impressive structure here is the 72 inch high curved wood trestle, which took several months to build. That’s right, this isn’t some thing that was pre-built from a kit. Nope. Some guy made it piece by piece in his home workshop. Impressive to say the least. 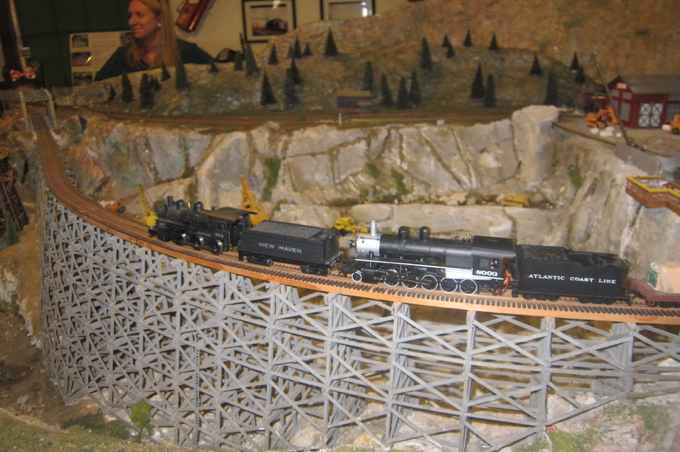 By the way, I got that 72-inch figure from a Connecticut Magazine article… but looking at my picture of it, that seems a bit crazy. The layout is now in a 28’x28’ space the main table is L-shaped and uses O scale. 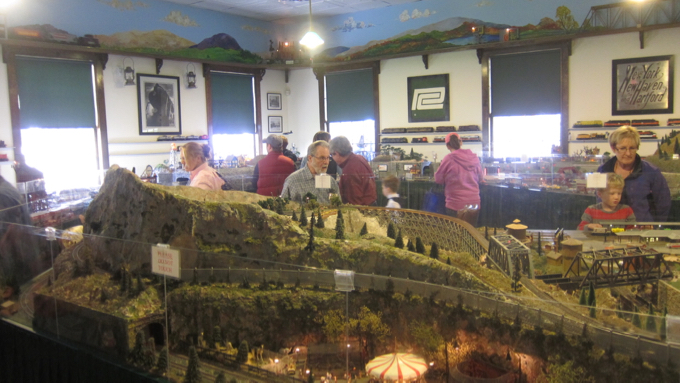 O scale? Hm, I’m familiar with HO, but O? O scale (or O gauge) is a scale commonly used for toy trains and rail transport modelling. Originally introduced by German toy manufacturer Märklin around 1900, by the 1930s three-rail alternating current O gauge was the most common model railroad scale in the United States and remained so until the early 1960s. In Europe, its popularity declined before World War II due to the introduction of smaller scales. 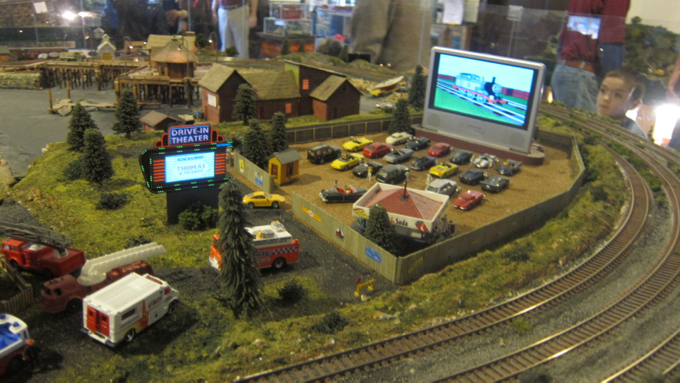 O gauge had its heyday when model railroads were considered toys, with more emphasis placed on cost, durability, and the ability to be easily handled and operated by pre-adult hands. Detail and realism were secondary concerns, at best. It still remains a popular choice for those hobbyists who enjoy running trains more than they enjoy other aspects of modeling, but developments in recent years have addressed the concerns of scale model railroaders making O scale popular among fine-scale modellers who value the detail that can be achieved. 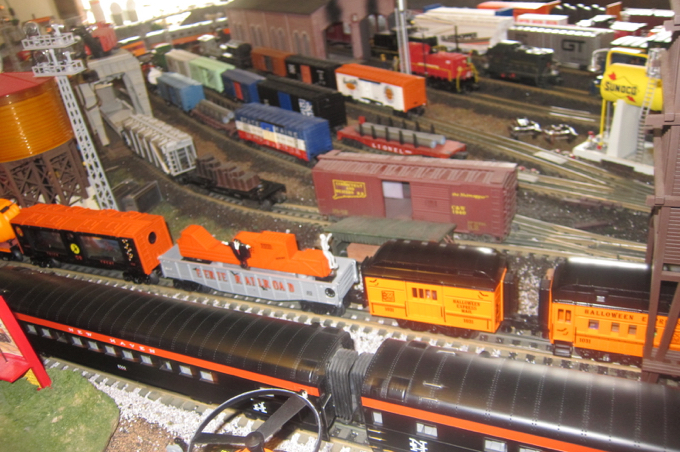 During my visit in 2013, there were plans to improve the layout in a variety of ways. Explanatory signage suggested that things would be moved around and most of the “good stuff” would be retained (like the trestle, which seems to be the showpiece here.) I read some more recent stuff (2018/19) that suggested to me they will be expanding the layout beyond the one room, which is pretty awesome. 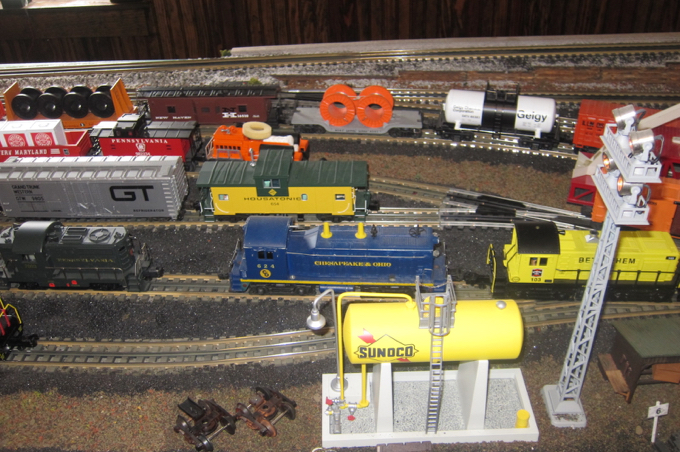 There are signs in the museum outlining the various local rail lines. The Shore Line Express (Amtrak under contract with the Connecticut DOT) and the Waterbury Branch (Metro-North). No mention is made of the constantly closed lines – often due to the bridge in Norwalk being “stuck” for the millionth time. 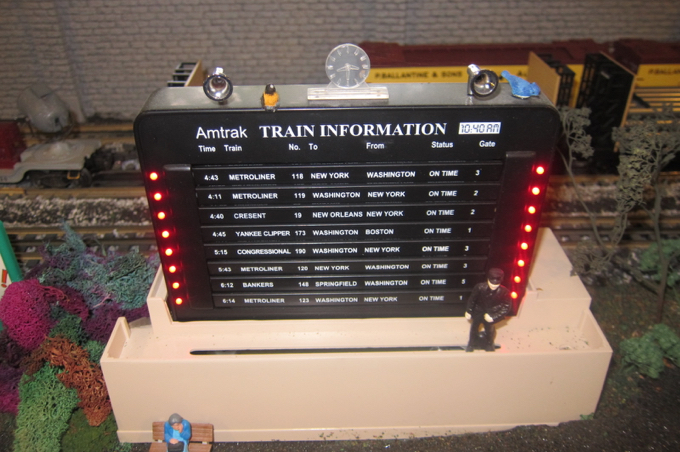 I love that these train guys loves not only their model trains, but the real ones as well. I just wish our state and federal governments loved our rail system as much. 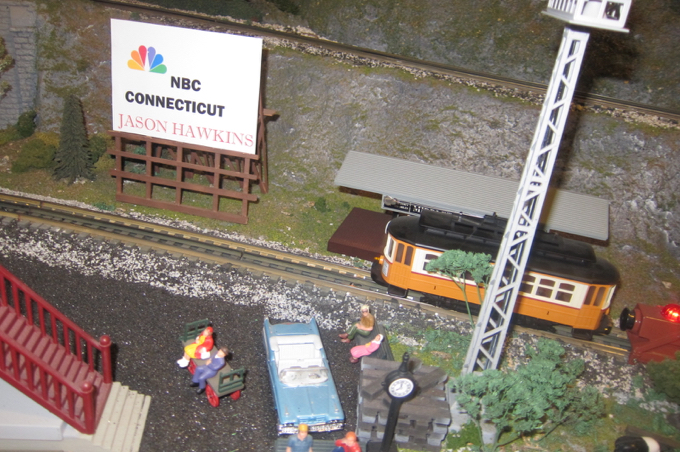 I wonder what Jason Hawkins is up to these days.

And I just wish Damian didn’t love model trail layouts so much. It was incredibly difficult to extricate him out of this museum to move on to the other attractions of Boothe Memorial Park. We were finally able to do so, but after touring the other buildings here, he demanded to return to the trains. 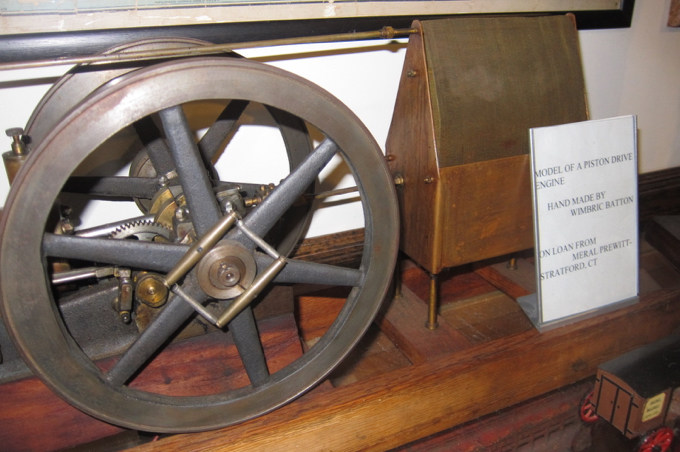 Sigh. (Secretly, I wanted to see the trains again myself. Just don’t tell my wife.) 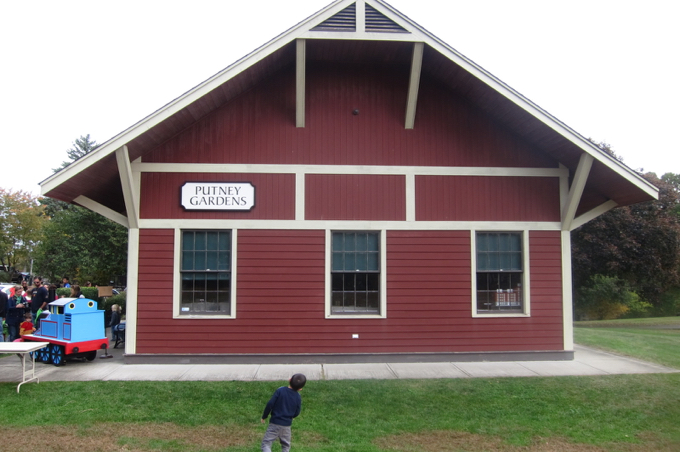