Almost exactly one year before my family visited the Military Museum of Southern New England in Danbury, its founder was shot and killed by police at his Ridgefield home. About a year after our visit, the museum’s name was changed to The U.S. Military Museum. And three years after our visit, it permanently closed – moving its vast collection of 10,000 items to The Museum of American Armor on Long Island. 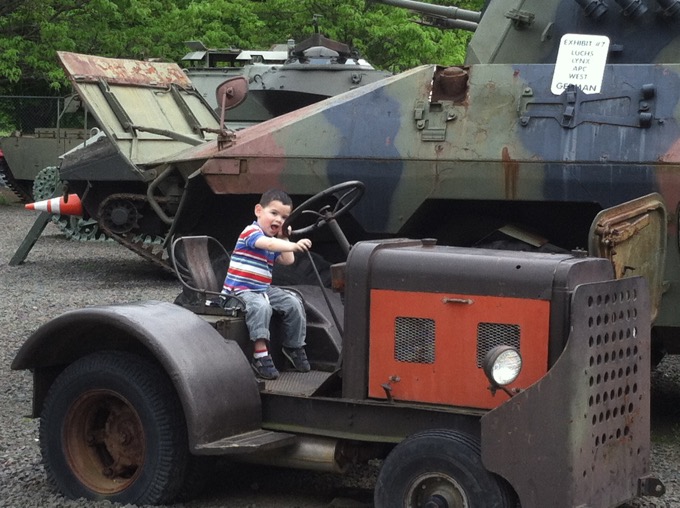 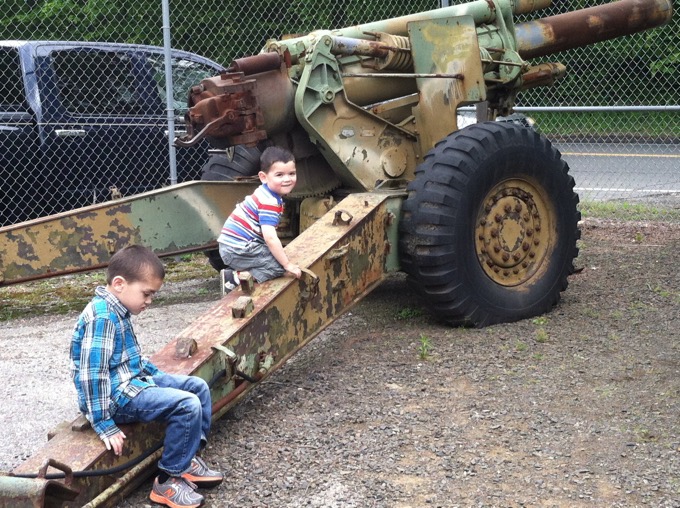 Phew. Where to begin?

How about the beginning and John Valluzzo’s original idea to create a museum to honor the nation’s soldiers and and “to keep a tangible testament to the horrors of war in hopes that history will be less likely to repeat itself,” according to a 1999 New York Times article. 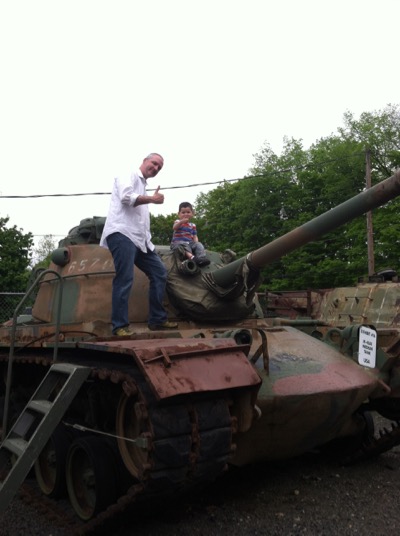 Which, really, is a slightly different take on war and military museums. Yes, the men who have fought in wars and served in our military should be honored, but you know what? What they were asked and forced to do from the trenches in Belgium to Okinawa to Da Nang to Mosul was really, really awful. I appreciate that about this place.

Mr. Valluzzo served in the United States Army during the late 1950’s. But it wasn’t until 1984, after meeting some World War II veterans and hearing their accounts of war, “that something changed for me,” he said. “I realized that we owed our freedom, our standard of living, and in fact our very lives, to those who unselfishly answered the call of duty at such a pivotal time in history.” 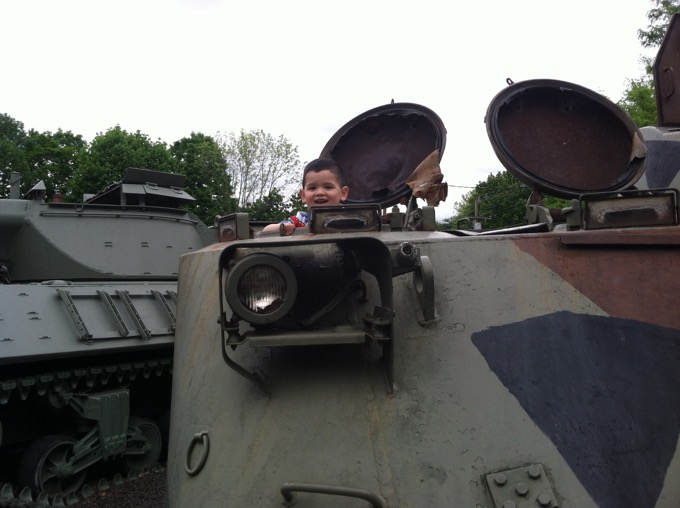 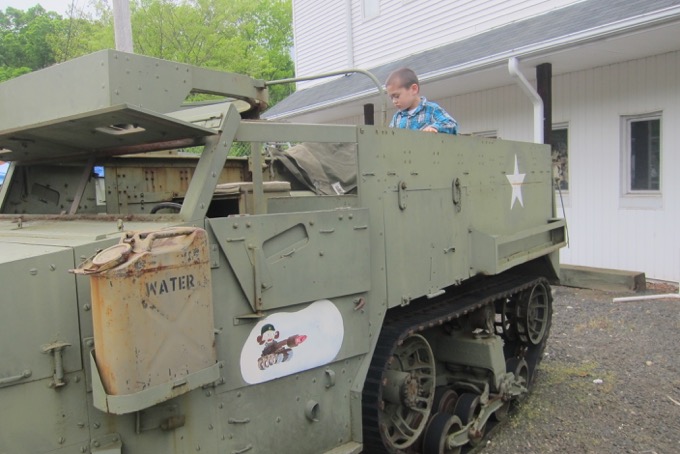 The idea for the museum was hatched in 1985 as a small place to honor WWII veterans. A decade of planning and collecting later, the museum opened in 1995. What was meant to house a single tank quickly became a massive collection of over 80 vehicles and other items – said to be the largest privately owned collection of military vehicles in the US at the time.

Of course there was nowhere in Danbury big enough and cost-effective enough to house Valluzzo’s full collection, so he stored his tanks and vehicles in various places. At one time, he nearly moved the whole operation to the Mohegan reservation in Montville. That would have been pretty weird – a US Military Museum on a Native American reservation. 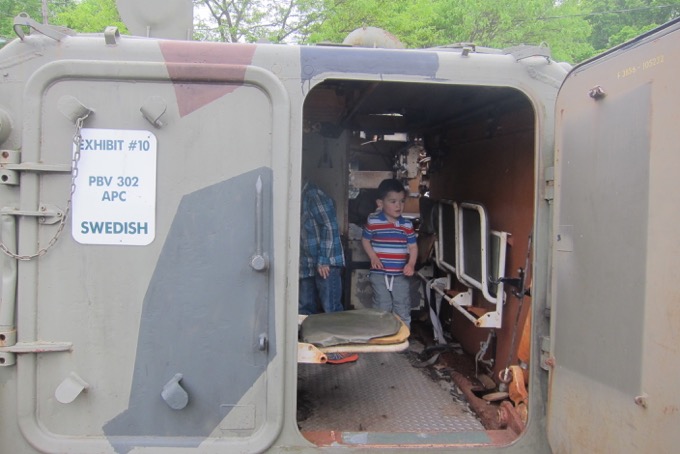 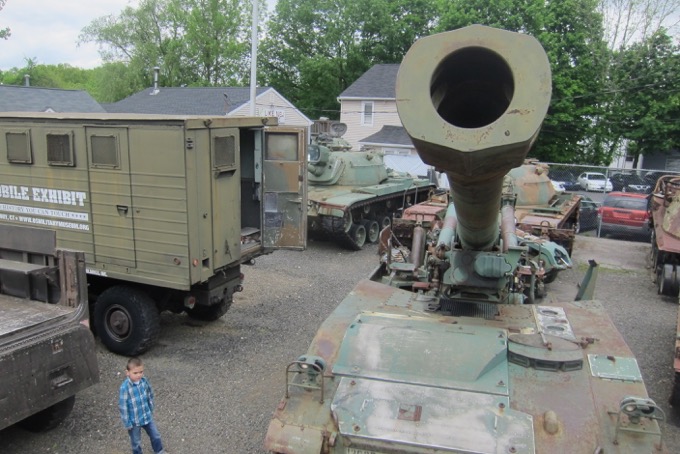 There were other grand plans – a move to Tarrywile Park with classrooms and a proving ground and a possible way to move visitors between the museum and the Danbury Railway Museum. Neither came to fruition.

And so it stayed in Danbury for 22 years or so, with many vehicles stored outside in the elements. While this meant that they would ultimately fall prey to deterioration, it also meant that kids and others could climb on the vehicles and even get into them. The museum often held “Open Turret Days” when this was the thing to do. 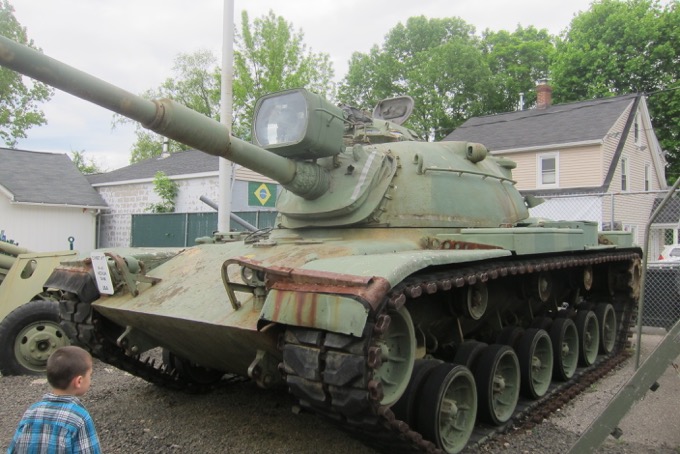 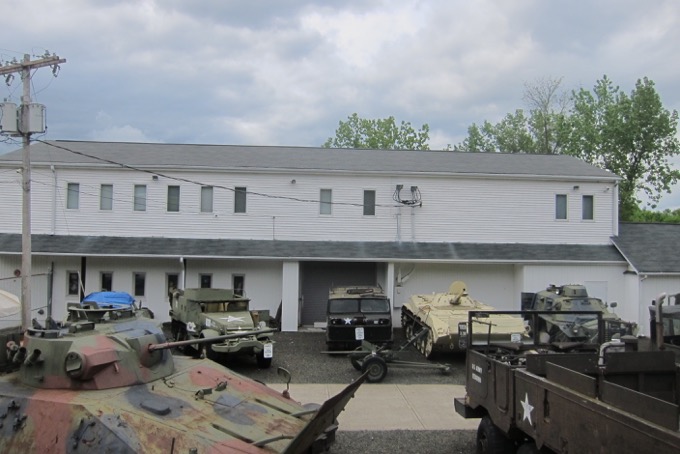 Tanks don’t just fall in the lap of private collectors. I particularly enjoyed this recounting by Mr. Valluzzo, also from that New York Times article:

Nearby, an M-18 tank destroyer and an M-8 armored car that have been given the markings of the 643d Tank Destroyer Battalion, which was mostly composed of men from Fairfield County. The vehicles are shown as they would have been in winter 1945, near the town of Neuss, Germany, where the 643d fought a battle on the road to Duesseldorf.

The soldiers, once department store mannequins modeling handsome clothes, have been transformed into warriors swathed in bloody bandages. 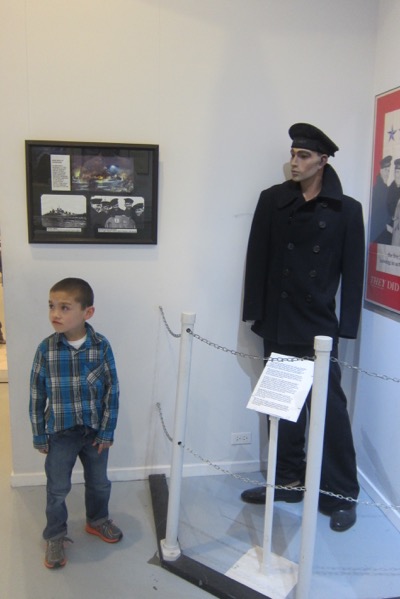 On back of the vehicles are crates filled with chickens. ”That’s their food,” explained Jim Monette, another volunteer who is the museum’s director of operations. ”That way, they could have fresh eggs.”

The M-18, able to travel over 60 m.p.h., was the fastest tracked vehicle of World War II and is very rare, Mr. Valluzzo said, adding that it took a year and a half of complex negotiations with the Yugoslavian Government before he acquired it in 1987. 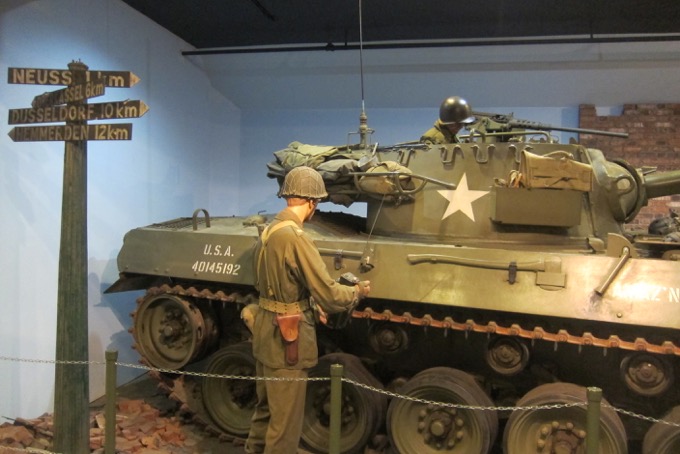 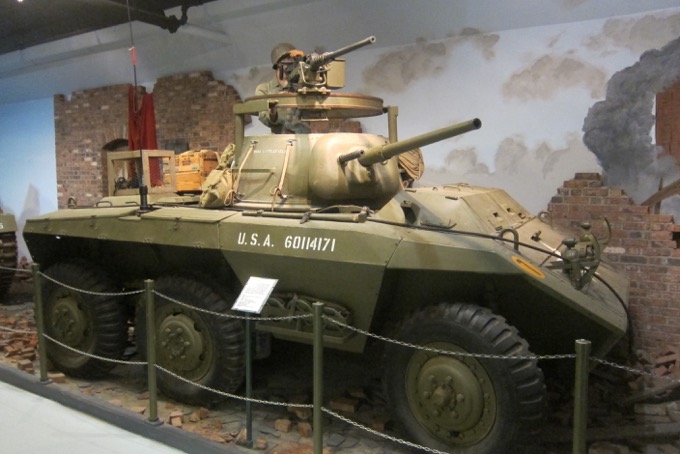 ”We really wanted it because we felt it was an important piece of tank destroyer history,” he said. ”First, they tried to get us to trade something for it, and we said, ‘Well, we’re not really in the arms business.’ ”

After countless meetings with diplomats in Washington and a trip to Belgrade in 1987, the deal was done. ”I felt like 007 in Yugoslavia; there were interpreters and guards everywhere, the doors and walls were padded, it was really serious, top-security.” 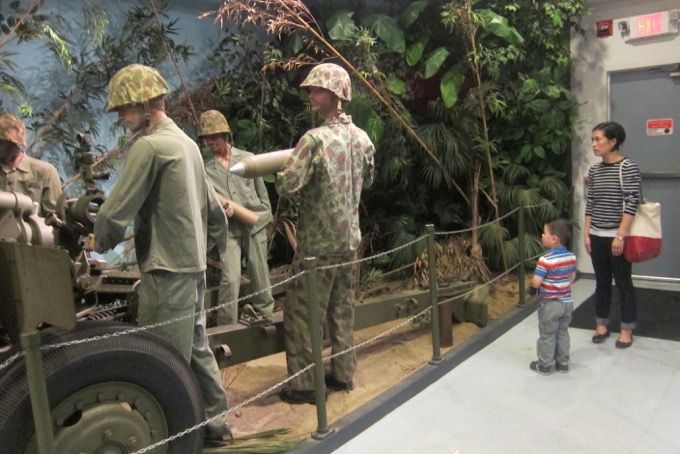 (And if you’re wondering how this guy could afford such an expensive hobby, Valluzzo inherited a large estate and made his own fortune in real estate. He also drew a gun on a cop and was shot, but we’ll get to that later.)

I am in no position to describe each tank and military vehicle in any sort of detail. There were a lot of them here in Danbury, and they were taken care of by a volunteer army. Let’s go inside. 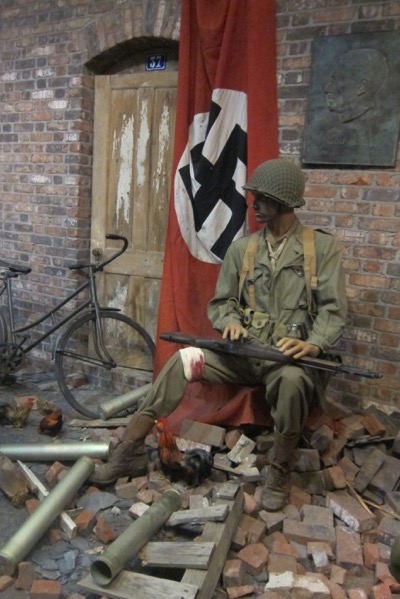 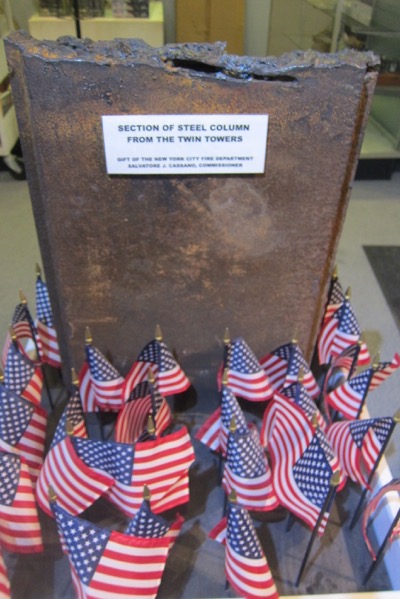 A piece of the World Trade Center

Not knowing what to expect, I was very impressed not only with the collection itself, but with the quality of the presentation. The exhibits were set up more or less chronologically; from WWI up through the killing of Osama Bin Laden. And yes, the idea that “war is hell” was definitely a theme – but not so horrific that I was uncomfortable having my three-year-old taking it all in.

Calvin did ask some pointed questions about war and guns and killing which was fine. He knew Hoang was from Vietnam but had no clue about how her family wound up in New Britain and that his grandfather fought in the war. (Nor that his great grandfather – my grandfather – served in the Pacific Theater in WWII. Kid was three and there’s only so much he could handle.) 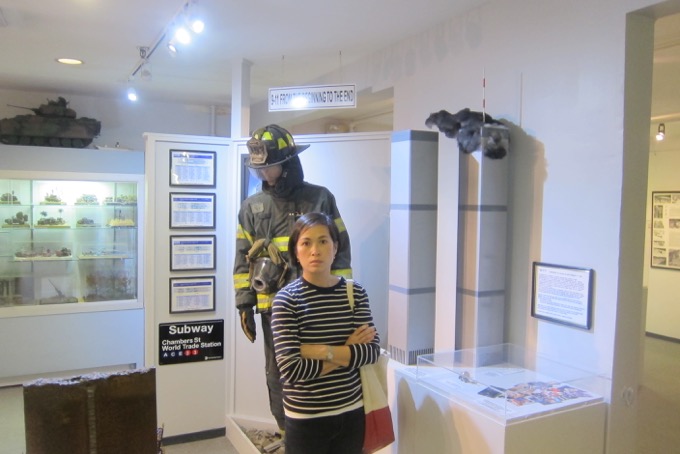 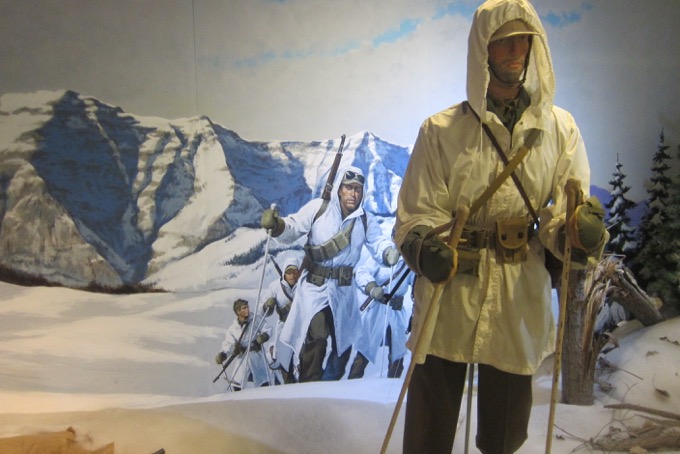 The museum supposedly brought in 10,000 people a year. Valluzzo himself spent well over a million dollars on the collection and upkeep – often covering a year’s losses out of his own pocket. (Which, y’know, makes sense for a private collection.)

It’s amazing what they packed in here. Even inside, there are lots of tanks, armored personnel carriers, utility truck and other armored and unarmored vehicles. All of the indoor vehicles were said to be in running condition. 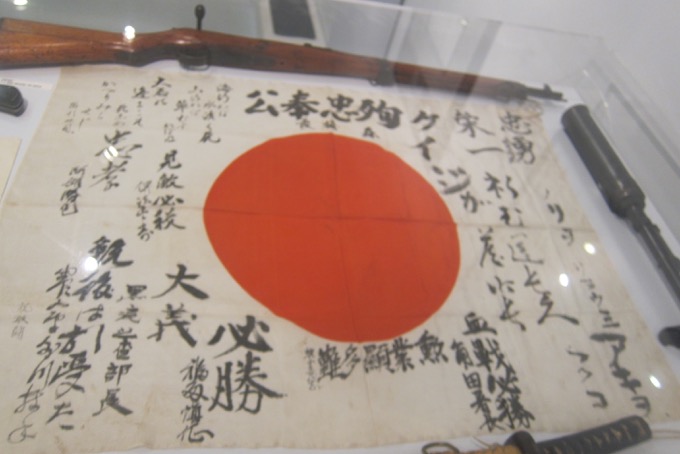 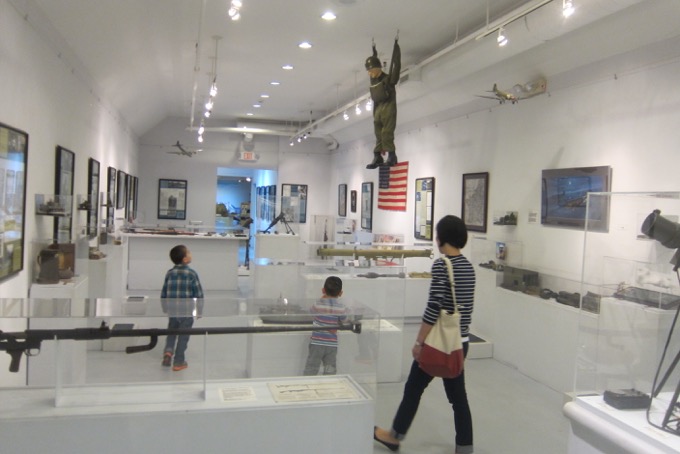 An M8 Armored Car and the aforementioned M-18 Hellcat Tank Destroyer face you as soon as you step into the exhibit area. To the left is a WWI trench recreation, complete with bunker and wounded soldier, and beyond that a Vietnam era 105mm Howitzer with gun crew and surrounding jungle foliage.

Although cute, there’s nothing cute about the Nazi Fiat Topolino Staff Car set in the African theater Rommel operated in. Two other dioramas appear at the end of the indoor exhibit, both representing US Mountain Troops in winter environments. A number of artifacts, small arms, and other light weapons are displayed in glass cases along the short tour route. 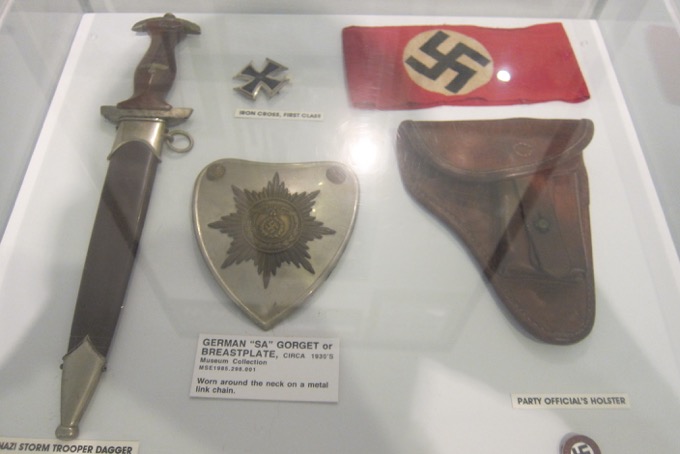 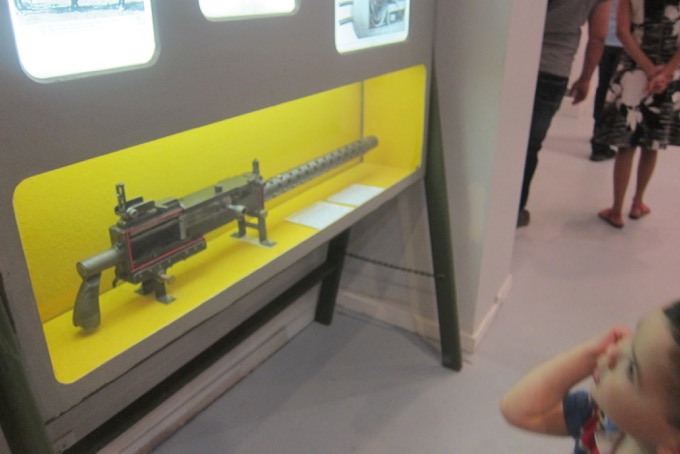 By far the most impressive thing here was the life-sized dioramas of combat action. Most of them were set in World War II and were created by Fairfield artist Richard Kuchta. The soldiers, once department store mannequins modeling handsome clothes, have been transformed into warriors swathed in bloody bandages. It was pretty impressive to say the least.

The demise of the museum was less impressive. As I said, it happened a year before our visit and it was ugly. Valluzzo was involved in a domestic dispute with his girlfriend at his mansion in Ridgefield. When police arrived, he was waving a pistol around and pointed it at the police. 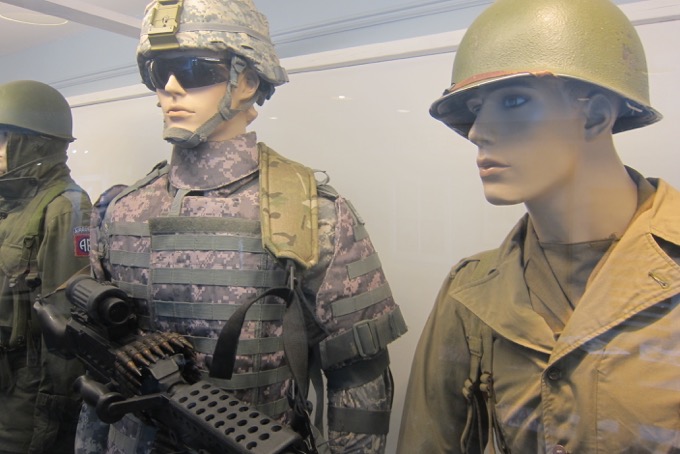 So they shot him. Dead.

And the pistol was not loaded.

From that point onward, the museum went into a long, slow decline. Without Valluzzo’s support and money, there was just no way it could continue. They sold vehicles but it was never enough. Then came the ugly behind the scenes stuff…

In 2015, Valluzzo’s ex-wife, Cynthia Kasper, tried to evict the museum from the Park Avenue property. Valluzzo’s children by an earlier marriage fought the eviction and won, but the expense involved was more than the museum could absorb, officials said. 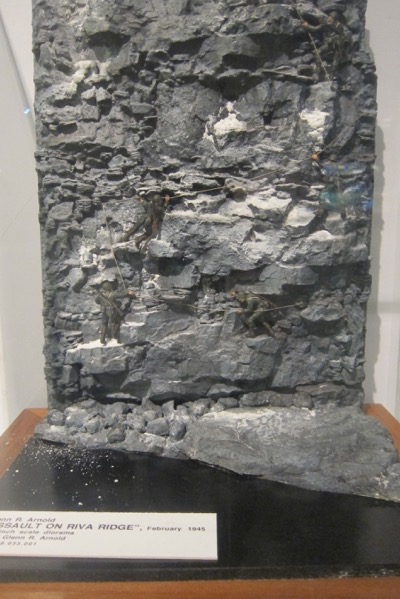 And that was all well and good until the museum just couldn’t continue. It’s really cool they donated the entire collection to one museum though – rather than selling it off piece by piece to make someone some money. I’ll let board member Al Barto have the final word:

“The strength of our exhibits and the underlying mission have never wavered,” said Al Barto, secretary of the U.S. Military Museum. “From its first day to its last, this museum has been about paying tribute to the American G.I. and our defense of freedom. This is a difficult decision for us, but it was made with considerable care to ensure that the legacy of the U.S. Military Museum lives on by gifting our assets to the Museum of American Armor on Long Island.”

This was an impressive personal collection and it was displayed nearly as well as a professional museum. I can’t imagine why the wealthy owner pointed a gun at a cop, but he did and now the museum is no more. (Well, unless you want to ferry or train or drive to Old Bethpage, NY that is.) 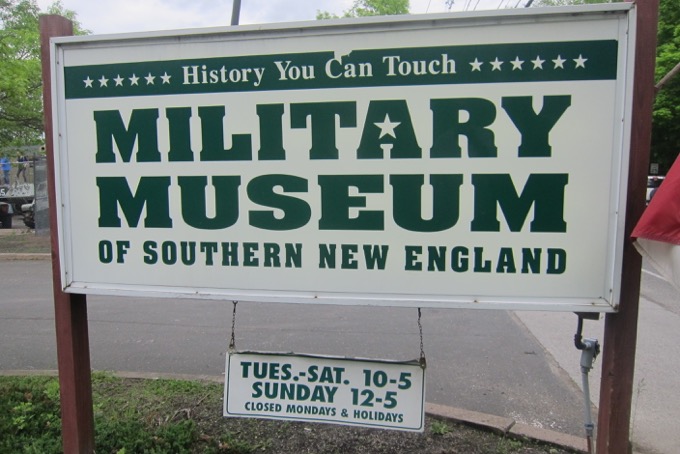