The museum is now home to The World’s Tallest Uncle Sam!

It may surprise you to learn that the Danbury Railway Museum has only existed since 1996. It just seems like the kind of place that has always been there… in the heart of Danbury and its serpentine maze of streets. 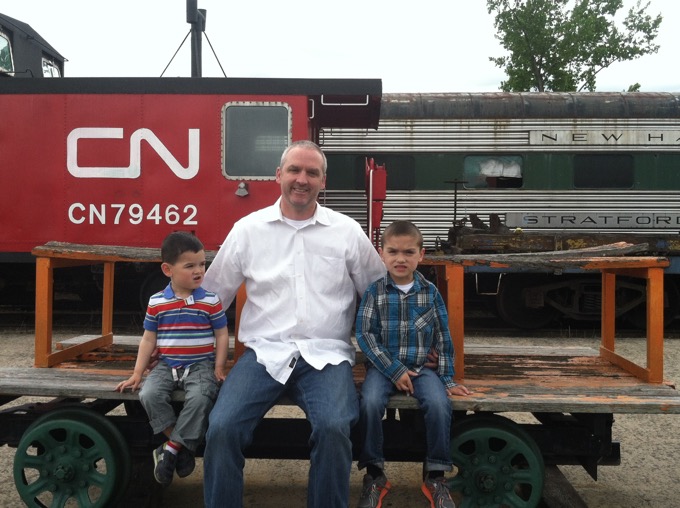 Which, now that I think about it, perhaps the city planner wasn’t as drunk as his legacy of crazy roads suggests. Perhaps the New Haven Railroad line existed before many of the streets and it was the rail lines that kind of forced the insanity? 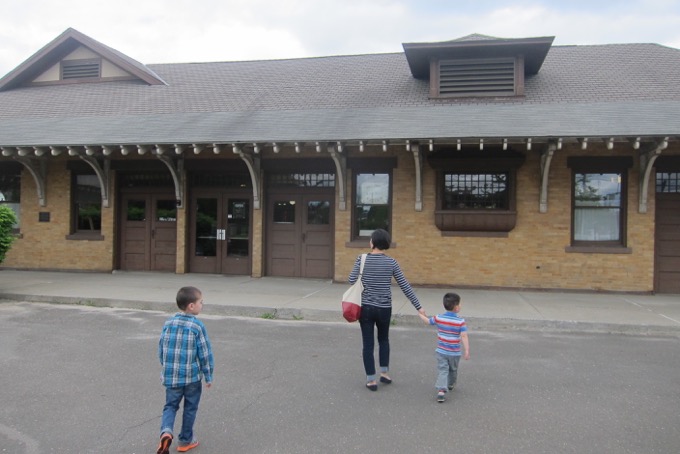 Danbury has an active Metro-North station, whisking residents to New York City and elsewhere every day from a newer station about 500-feet away. In other words when you bring little kids to the museum as we did, there’s a chance they’ll see a real live commuter train!

What? That’s not exciting? Okay, how about a real live New York-New Haven & Hartford dining car hot plate from 1955? 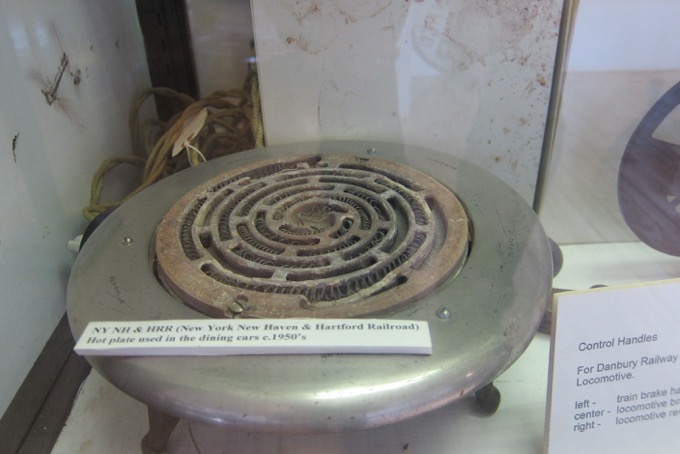 I kid, I kid. There are a couple large model layouts here (HO and G), as well as a library and other exhibits at the museum in the old station. Hands down, the coolest thing here is the model locomotive that was built by New Fairfield’s John O. Freeborn.

This is a 1/12 scale model of an 1890 steam locomotive, made with 23 different kids of exotic woods with brass accents for parts such as boiler rivets and chains – things where wood would have been impractical. All working parts of movable. The running gears are operational. Mr. Freeborn spent over 2,000 hours designing, machining and building the thing. It’s beautiful. 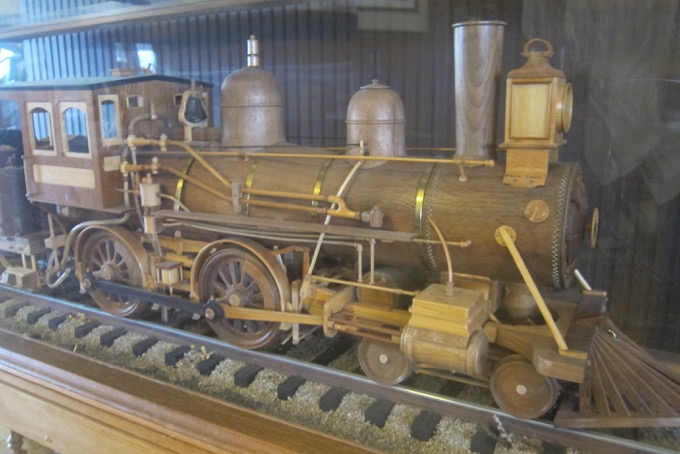 We’ll come back to the indoor stuff later. My boys were itching to get outside to see some life-sized trains. And luckily for them, there are a lot of them here. Again, the DRM exists at a freight yard. Freight yards are large. (The museum actually shares their rail yard with Metro-North, so there are often train cars that are in current use.)

Built in 1903 for the thriving New York, New Haven & Hartford Railroad, Danbury Station boasted adjacent rail yard facilities including an engine house, a freight house, a round house and a turntable. Through the 1950’s and into the 1960’s, Danbury was an important station for the New Haven Railroad. Film buffs will find it interesting to learn that Alfred Hitchcock’s Strangers on a Train was filmed in and near the station. But, the 1960’s began a period of decline for the railroad and the station, and by the 1980’s, the engine house had burned and it and the freight house were torn down. 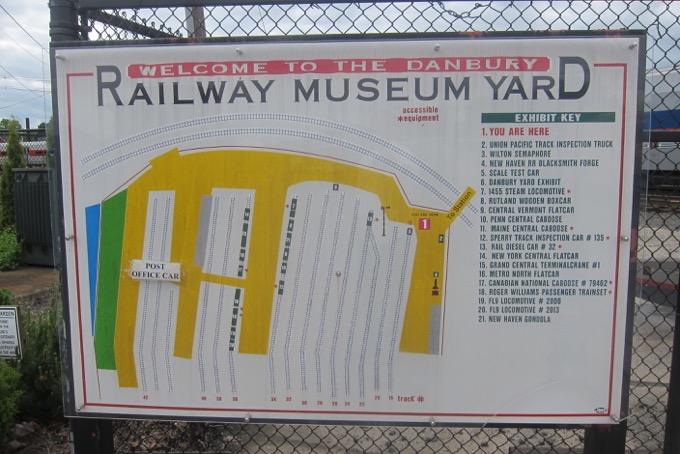 And then Danbury kind of fell apart. Not unlike several other Connecticut cities, the 1990’s were tough. Industry had left, people were lured to shop in the suburbs by giant new malls and the like. Metro-North closed the station in 1993, the inner city was in decline, and the station was crumbling.

Since everything was already in place, those who are interested in such things decided Danbury would be a great place for a railroad museum. It took a few years, a $1.5 million dollar grant, and lots of hard work, but the museum opened in 1996. 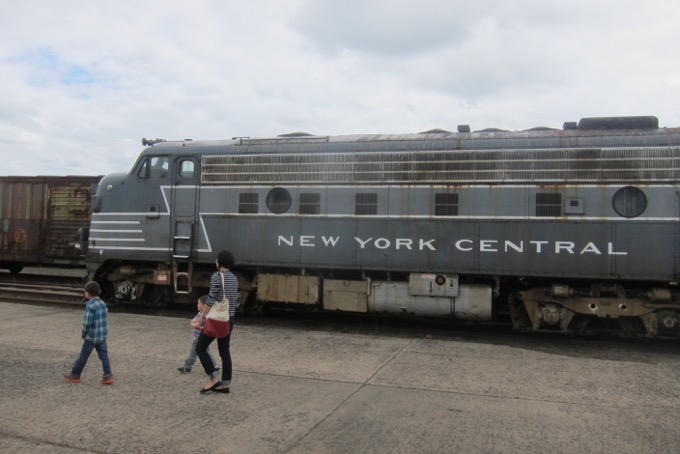 Among the first rolling stock were 5 coaches acquired from the Housatonic Railroad, an Alco RS-1, and an ex-New Haven Caboose. By the end of 1995, 10 pieces of equipment had been acquired. It’s at this point I realize that explaining things like “Alco RS-1” would be absurd. There are 15-tracks here across 10-acres. The museum is home to over 75 pieces of “rolling stock” and locomotives.

Several cars are open for visitors to check out. Passenger cars, locomotives, cabooses, mail cars. It’s pretty fun for kids to run around and walk through different types of train cars from different eras.

In the summer, visitors can ride on a train… in the rail yard. Okay, I said the place was big, but big enough for a worthwhile train ride? Kind of, yeah. The ride takes about 30–35 minutes and includes a unique ride by the passengers on the museum’s operating turntable. The turntable is kind of THE thing here. 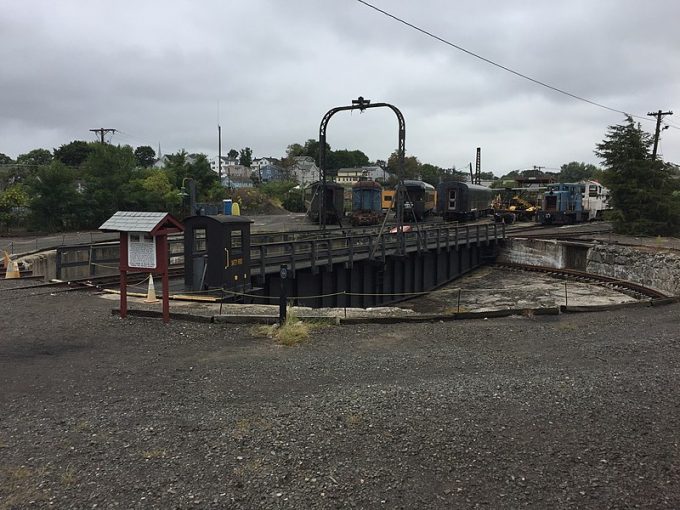 The turntable, built around 1914 was originally part of a roundhouse and machine shop complex. A fire destroyed the buildings in the 1980’s, leaving “the only intact surviving railroad turntable in Connecticut”. It is essentially a swing bridge, and is located several hundred yards east of the station.

We poked around the railyard for a good 45 minutes. Of course, neither of my sons gave a whit about the history of the engines and cars. However, if they did, the museum provides good signage at each piece. Let’s just look at some pictures. 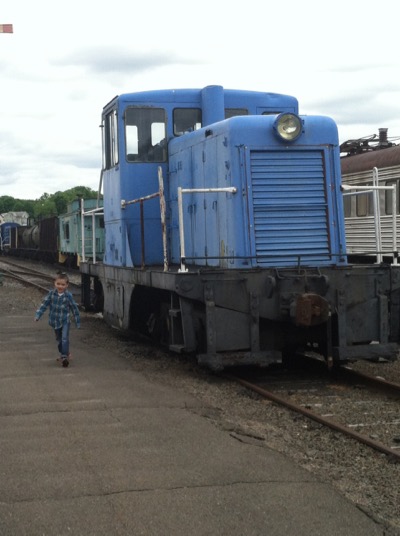 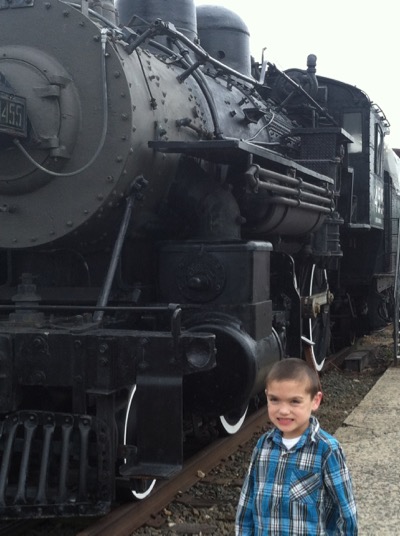 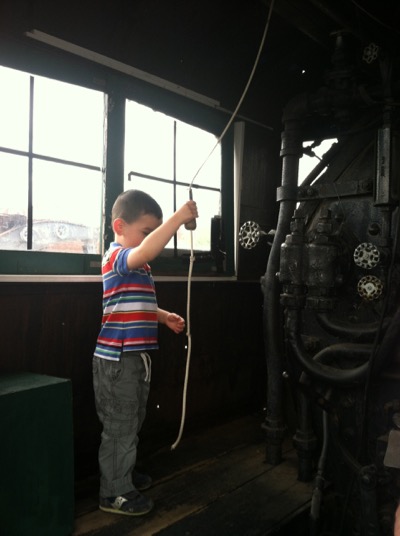 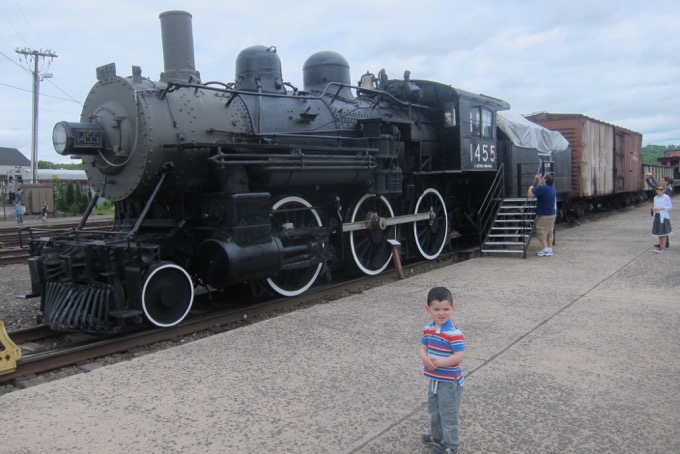 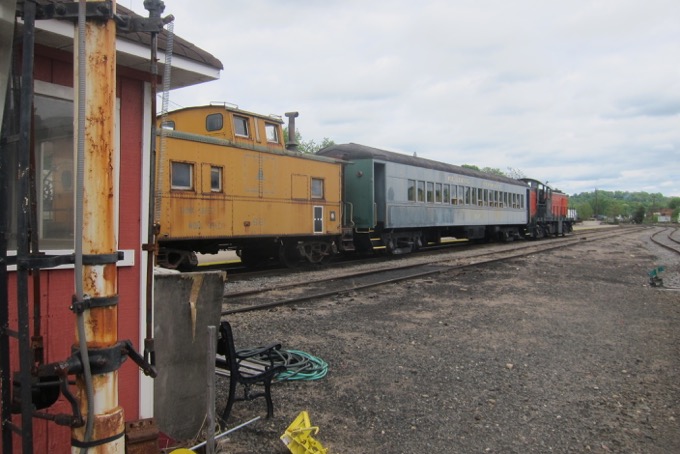 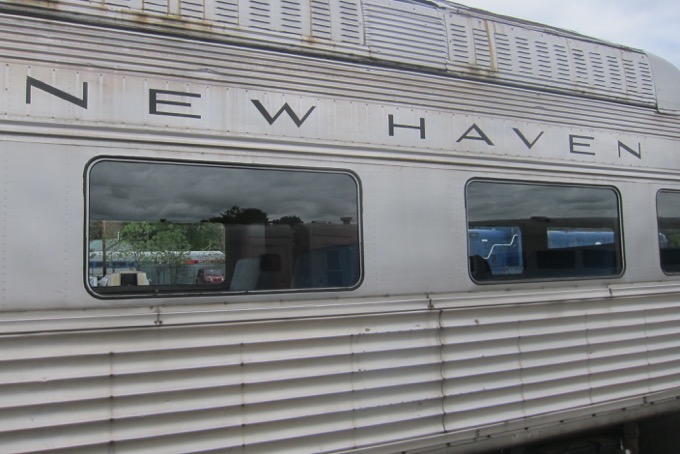 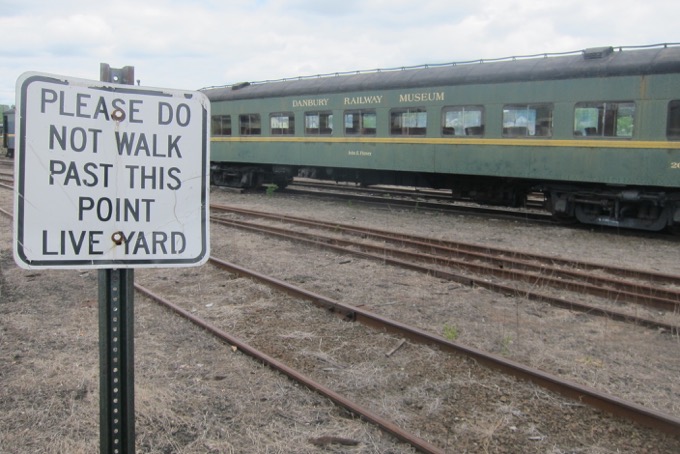 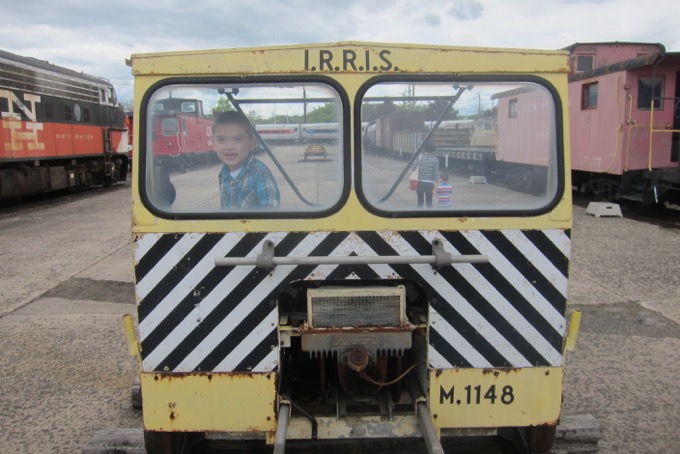 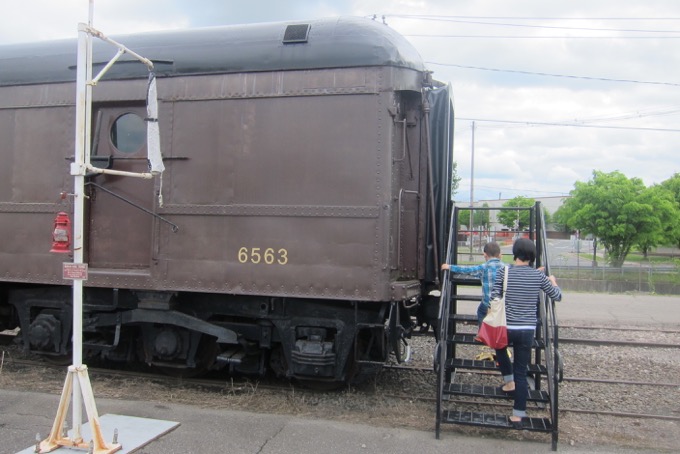 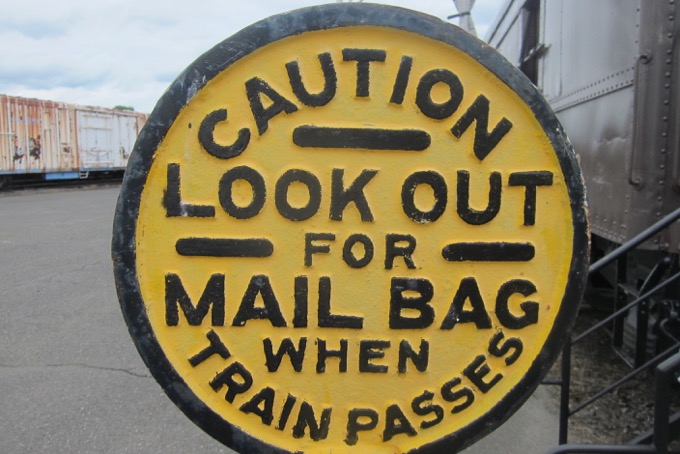 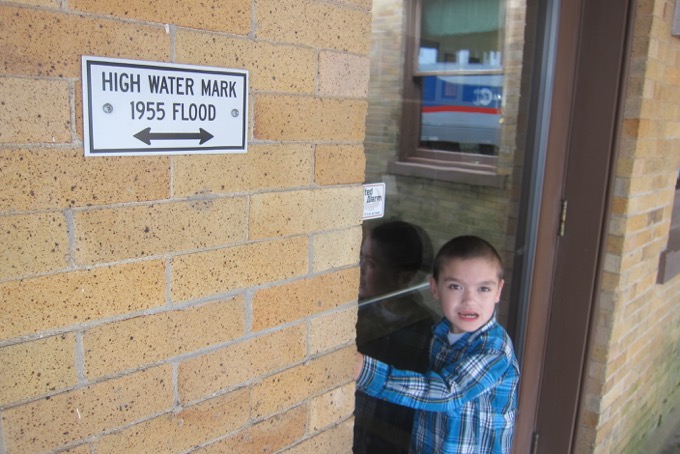 Wow, bet you weren’t expecting such laziness on a museum page from me! If you’d like to learn more about the rolling stock here, the museum has an excellent compendium of them all here. We all found the mail car to be the most interesting thing in the yard.

A literal post office on wheels, the train would pick up the mail, sort it, and distribute it without needing to stop. The interior consists of a Railway Mail Service standardized 60-foot floor plan, and 10-foot baggage section. The post office part of the car would be locked and only accessible by the postal clerks or in an emergency, the conductor. The walls of this section are lined with large overhead bins for over-sized mail, small pigeon holes for first-class mail, and foldable iron wall racks holding numerous open pouches. Each pouch would have been labeled for a certain post office, distribution station, or connecting train. Down the center of the floor is a set of movable stanchions for supporting two large sorting tables. 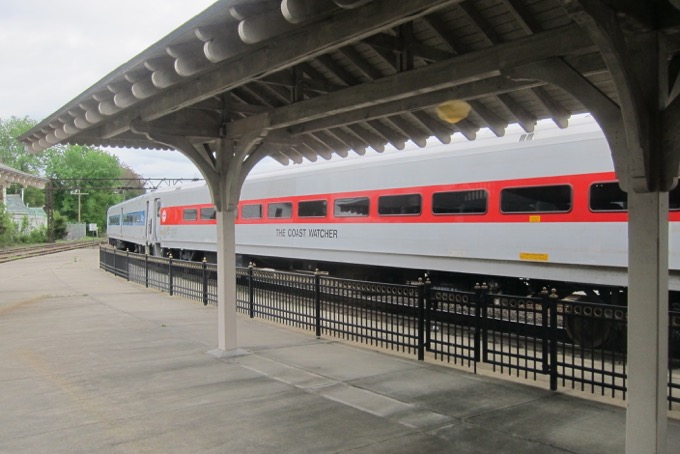 After spending a long time outside, we went back into the restored train station part of the museum. As I mentioned earlier, it contains all sorts of random pieces of railroad history. There is a model railroad display and a bunch of artifacts from the rail-happy days of yore. 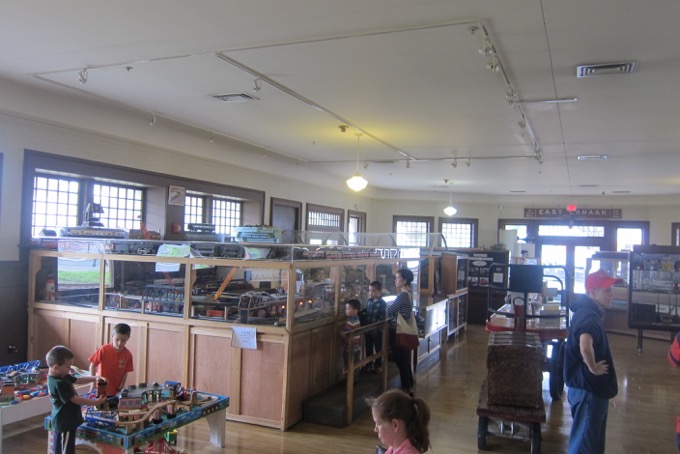 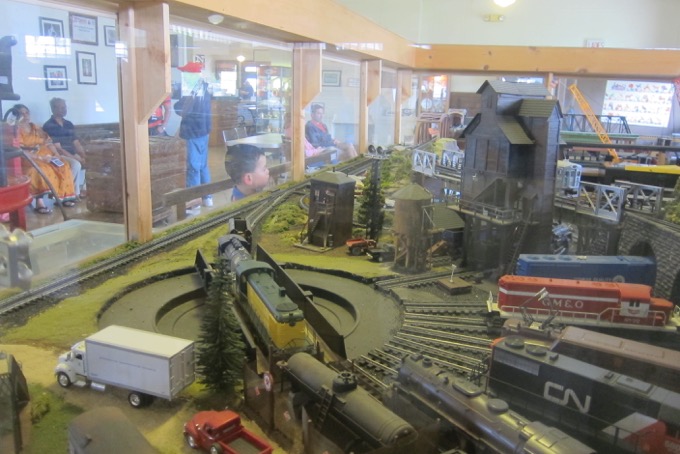 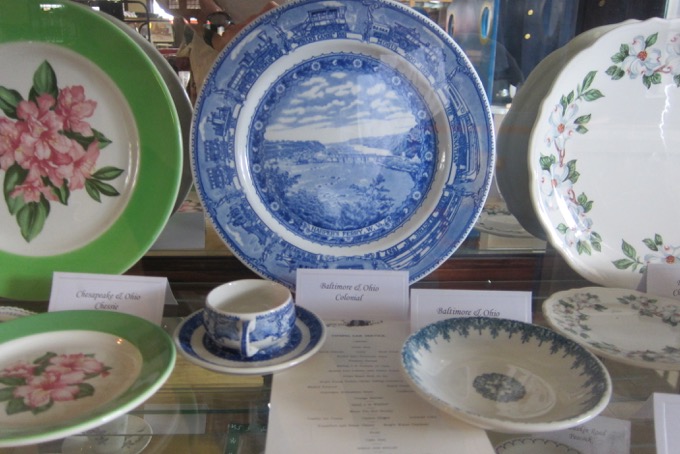 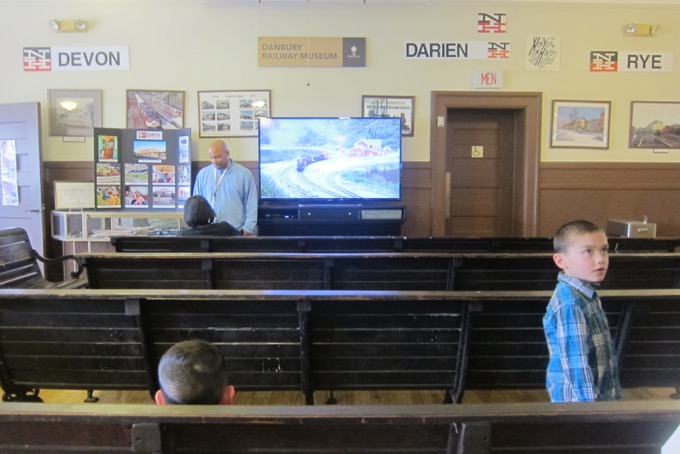 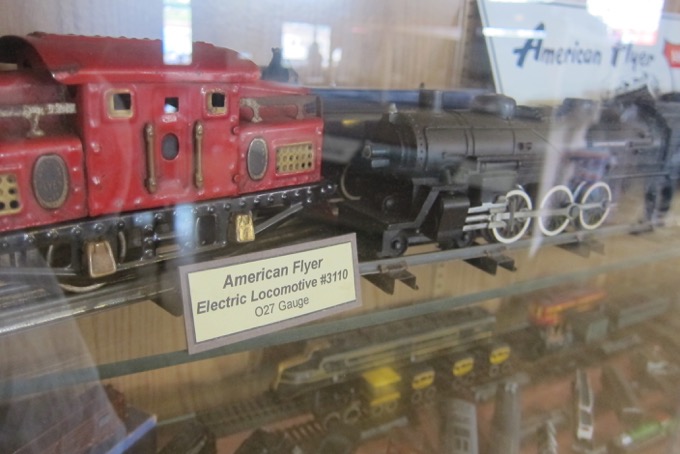 My favorite thing here is the old school time table. If only because I always loved the clickety-clack sound they made – and when Grand Central Terminal in New York went digital, it bummed me out. It also made the “Saturday Night Live” set outmoded, which stinks because I always enjoyed how it had the Danbury line on it for so many years. 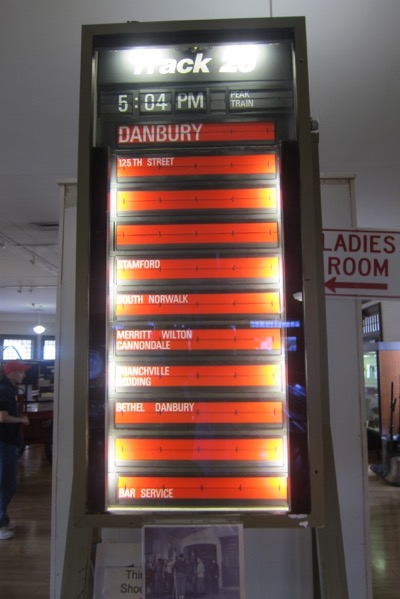 Connecticut has several railroad and trolley museums; from Essex to East Windsor, from Branford to Willimantic, from Thomaston and Danbury plus more. Danbury’s is still a work in progress, but their collection rivals any of the others. And really, who doesn’t love train history? 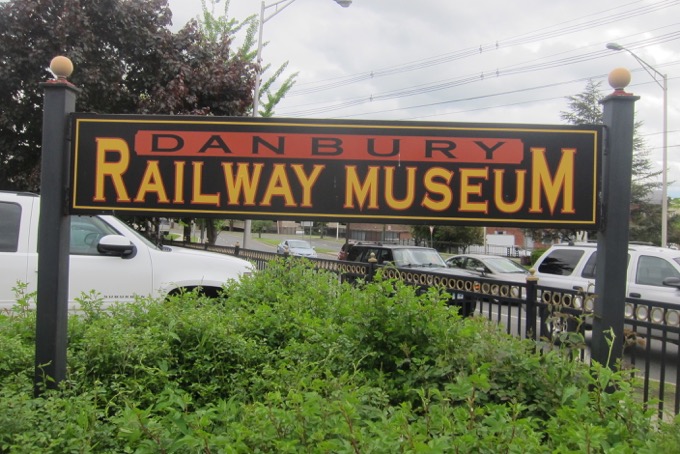