I know it’s weird that I review Connecticut travel guides. One could argue that you’re reading the best one that exists. (Although, if you wanted to put CTMQ in book form it would run several large volumes and be rather unwieldy for the traveler.) Over the years, I’ve been asked many times how I’ve come to create my lists of everything I do in the state. The full answer is long and boring, but it includes, “… and I read every single thing about Connecticut I can.” That includes travel guides.

Finding places to add to my lists in these types of books is rare, but it happens. And when it does, it’s like winning a mini-lottery. On the flipside, I try not to get too hung up on errors (unless egregious) and fully understand the impossibility of remaining current. It’s possible with a website like mine, though still incredibly difficult. The 2nd edition of the Insiders’ Guide to Connecticut was published in early 2015, which means the last round of editing was in mid to late 2014… a full 5 years before I read the book. In spite of that time gap, the Guide is still quite relevant and functional. 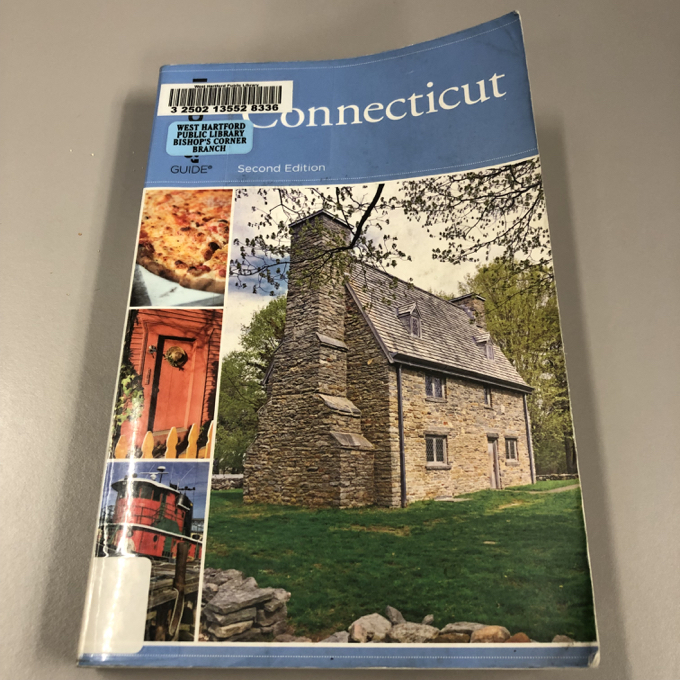 In the small world of Connecticut writers who write about Connecticut, Eric Lehman is one of the pillars. Certainly an excellent and qualified choice for this type of book. Lehman is a darn good writer and it shows here. The editors allowed Lehman to weave in a lot of narrative throughout the book which makes the exercise of reading it infinitely more enjoyable that a “straight up fact guide” would be.

Lehman is the author or editor of seventeen books, including a bunch of Connecticut books that I’ll be getting to (and reviewing here) over time. I hope he’s ready for me. Alright, let’s get to it. There are competing titles in this competitive genre of “cool” travel guides. Insiders’ Guides, Off the Beaten Path books, and Explorer’s Guides. There’s really not much differentiation among them to be honest, and they are all pretty much formatted and sized the same as well. Lehman breaks down the state by its eight counties, which seems to be the norm. It works fine, but I can never get over the fact that Connecticut’s counties mean literally nothing except to guide book writers and UConn dorm namers.

Lehman’s introduction is solid; informative and interesting. At the end of each county’s section, a day trip is offered up – a neat touch. Lehman’s selections of which museums and trails and sites to include is a nice mix of the obvious (Twain! Mystic!) and the not so obvious. This is the “Insiders’” thing, of course. For an outsider using this book to help her pick and choose some cool stuff to see, it does the job well.

As an “Insiders’” guide, readers are treated to the deep Nutmeg intel they can only get from such places. These are asterisked as “Insider Tips.” To wit:

Roxbury Land Trust has created one of the best “private” sets of trails in a state with many secret trail systems. Few outside each town pay attention to these wonderful networks, which sometimes connect to our larger blue trail system and sometimes create their own little world. One of my favorites is in Roxbury… trail maps can all be found online. You probably wouldn’t have found these trails on your own; few in Roxbury or any of these other Connecticut villages want the rest of us to know about them. Secret’s out now.

Oof. Peter Marteka’s weekly column at The Hartford Courant has featured Roxbury Land Trust trails almost a dozen times. Steve Wood’s CTMQ features all of the… oh never mind. Insiders’ Guides force this kind of silliness, so I don’t begrudge Lehman – especially since he did pick a fantastic organization and set of trails to highlight.

Earlier I said that I wouldn’t get too hung up on errors. Every book has them – and of course this website has plenty. But since I’m a well-established jerk, I feel the need to mention a few. Plainville’s Robertson Field Airport is said to be “the oldest airport in the US.” It is the oldest airport in Connecticut, but was beaten out by a few others – notably the College Park Airport in Maryland. Is the Shallowbrook Equestrian Center is the “largest family owned horse complex in America?” I’ve no reason to disbelieve that, but can’t find a source backing up the claim. Amy’s Udder Joy Farm in Cromwell is listed again, as it weirdly is in every book, and I think it may have closed over a decade ago. Has Westport been called “The Beverly Hills of the East?” I don’t know. Did Lehman hike into the middle of a moose fight on the Tunxis Trail in Hartland? I can’t know. A couple bad addresses for trailheads too, but… the point here is that in a 376-page guidebook, only having a few unimportant errors should be considered a major success.

A bigger success is that I was able to add a few things to my various CTMQ lists! One from my hometown! (The National Theater for the Deaf at the American School for the Deaf is the longest existing touring theatre company in the United States! Woo-hoo!)