You Must Be Pulling My String
Mansfield (Google Maps Location)
August 25, 2007

Since my original visit, the museum moved from its original location at the old Mansfield Training School to a new building in the new “downtown” part of the UConn campus. But the old location was a big part of the original page, so I’m keeping most of it. The larger format pictures are from the new location.

“Master of puppets I’m pulling your strings
Twisting your mind and smashing your dreams
Blinded by me, you can’t see a thing
Just call my name, `cause I’ll hear you scream
Master
Master” 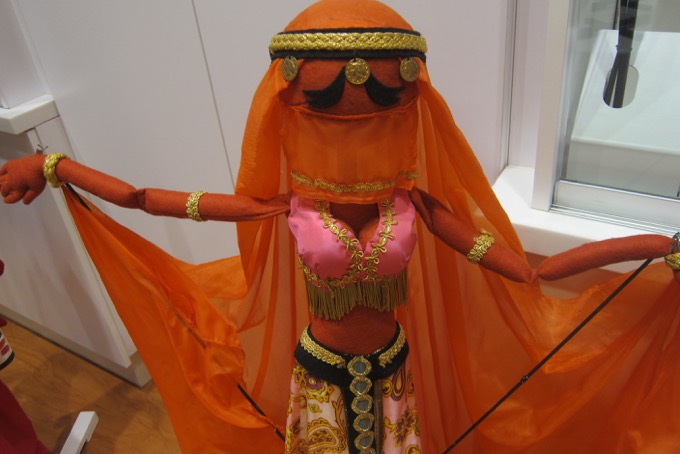 CTMQ co-founder (then immediate deserter) EdHill and I were still coming off the high of the Special Joys Doll Museum experience when we arrived at the Ballard Institute. It’s pretty funny when you stop to think about it; there is a puppet museum about 12 minutes up Route 44 from a weird doll museum. And I am fortunate enough to have been to both… within an hour.

The Special Joys museum has closed since this was written. 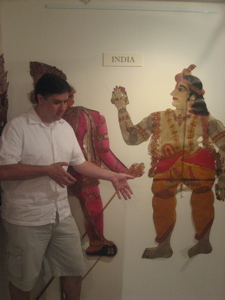 First, I’ll set the scene: The University of Connecticut – Depot Campus. UConn is in Storrs, which isn’t even really a town at all. All that you’ve heard about cows and trees is totally true. (Though, thanks to the billion dollars the state poured into it since 2000, it’s a beautiful campus.) But that’s not where the Ballard Museum of Puppetry is situated…

About five miles West of campus lies what is known as the Depot Campus. When I attended UConn, this was known as “Those decrepit abandoned buildings out by the prison.” By the looks of it, that description is still apt for the majority of the buildings there today. But those buildings have a rather sad (and sadly recent) history:

The Depot Campus used to be the Mansfield Training School (MTS), a facility for mentally retarded persons starting around 1900. It closed in 1993, after a number of lawsuits regarding the care of persons with mental disabilities and as the state established more group homes for former MTS residents. The portion on the south side of Route 44 became part of the University. The buildings on the north side became the Donald T. Bergin Correctional Institution. The University has repaired buildings at the Depot Campus as resources have become available.

There are several offices and storage facilities over there these days, including Human Resources, the Puppetry Museum, the Fuel Cell Institute, and of course, some intramural and recreation fields. Ah yes, the Puppetry Museum. I guess now would be a good time to mention that UConn actually offers a Masters degree in Puppetry – the only school in the US to do so. Go Huskies! I’d also guess it’s the only school with a Puppetry Museum on campus… well, on the five miles away former home of an archaic school for the developmentally challenged, anyway.

Ed and I found the museum and parked. As we were gathering our cameras and other museum visiting implements, we both noticed a human figure in the picture window. We couldn’t tell if he/she was looking out at us or even if he/she was human (rather than a giant puppet). So we both stopped and sort of stared at the figure… until after about 20 seconds. 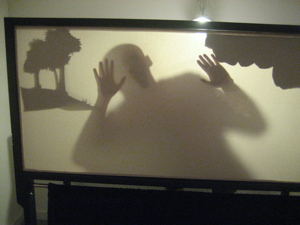 Because at that point she moved away – 20 seconds is a very, very long time to have stared at someone who, due to sunlight conditions, was able to see us just fine. Whatever, she would be happy to have visitors at any rate, right?

You bet. We entered the museum and were, um, how do I say this? We were attacked by a witch puppet. What was weird about it was that the woman who’d been staring at us, refused to break the witch character for far too long. She kept batting at us with the little puppet arm and cackling while standing right in front of us. Hoo boy, this was going to be fun! 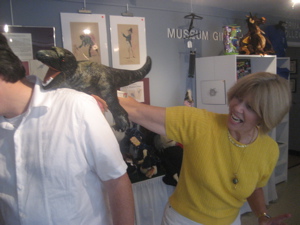 (Lest you want to stop at this point – it WAS fun.) The staring witch lady would be our tour guide, so let’s get to it! The museum is divided into two parts, as best as I can tell. One area for rotating exhibits (which change two or three times per year, I’d guess) and then the permanent collection. We were led to the current exhibit which was a rather impressive display of the rich and extensive history of shadow puppetry. 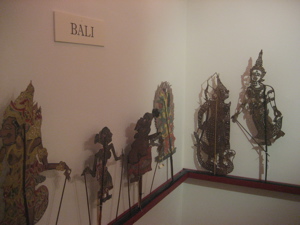 I found the definition of shadow puppetry to be somewhat loose but then again, my UConn degree is in biology, not puppetry. From the museum website, shadow puppets are:

Puppets used to cast shadows onto a projection surface of some type, so that the audience sees the shadow of the figure rather than the figure itself. The two main types are Direct Shadows – figures placed directly on the shadow screen – and Projected Shadows – those which are constructed on plates of glass or acetate and projected onto the shadow surface with an overhead projector. 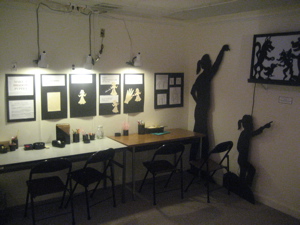 There was a whole section from Bali called Wayang Kulit. In their (Muslim) culture, no human figures could be replicated so all the “people” have bird-like heads. I typically put my related links below the reports, but this Wayang Kulit show is simply too nuts to hide down below. Be sure to have your volumes turned down to experience the beautiful solemn experience of a shadow puppet show from Indonesia. 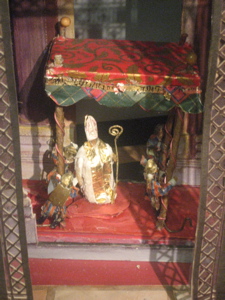 After the fun of the shadow puppets was the fun of the “Try-It” room. We didn’t have the time (or the skill) to make our own puppets, but that craft is available. (The docent seemed a bit off-put by my suggestion that Ed and I give it a go, as I believe it’s usually reserved for younger kids.) But there was a cool “shadow-light” screen to have fun with and a bunch of handy guides of hand animal shadows. The witch lady was very good at some of them.

For us lazy types, the museum supplied cardboard cut-outs of some of the more complicated hand shadow forms. Ed and I used these to put on a short play: 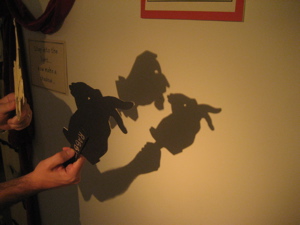 From there, we moved over to the permanant display of puppets. I will not do the place justice at this point, mainly because Ed and I were being childish and not paying close attention. Frank Ballard (the museum’s namesake) is a very big deal in American puppetry. He has created many, many well-known puppets and knows (or knew) many other famous puppeteers. 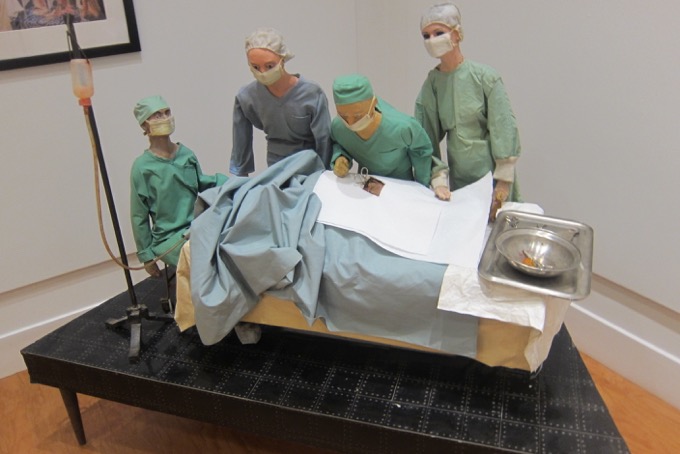 Such as? Such as Bill Baird. Bill Baird? With Cora Baird, perhaps the most prolific producers of marionettes in New York City. He designed big and bold puppets and had a unique and distinctive style of design and motion. Baird’s career included Broadway shows and films. He wrote The “Art of the Puppet”. A permanent theater in N.Y. from 1966-1978 was a New York landmark. He made the goats from “Sound of Music.” Yes, that Bill Baird. 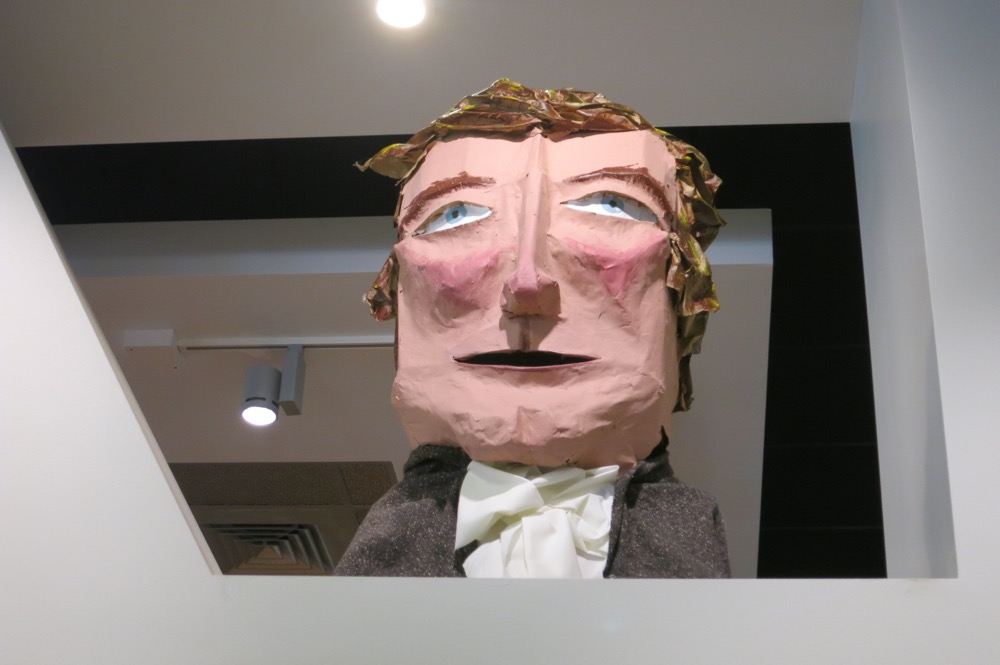 There was also some Howdy Doody stuff and some rather impressive work by Mr. Ballard himself. He did a whole H.M.S. Pinafore show and those characters were on display as well. Then there was the Sydney Chrystler display… He was an eccentric local man (from Chaplin, CT) who spent his entire life making incredibly detailed mini puppet sets. The one we saw was a massive Roman set. The problem was that it was actually really not very good at all. 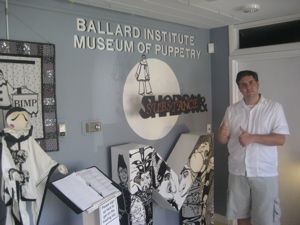 When I politely suggested this to the docent, she politely agreed wholeheartedly. Regardless, Ed and I took note of the nice little theater across the room – and hey, there were three random older women sitting there watching a movie on Frank Ballard. They paid us absolutely no mind as we began firing off pictures and being goofy once left to our own devices. 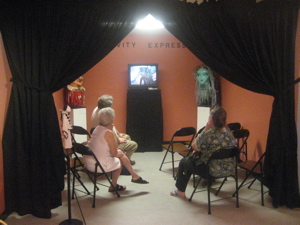 Ed and I snaked back through the entire two room museum to absorb it all… then checked out the gift shop area. As you’d imagine, there are a lot of puppets for sale. And dangit if we didn’t play with half of them. We had great fun at the Ballard Puppet Museum and you should definitely stop by and check it out if you’re ever in the area with time to kill. The woman who at first seemed a little weird turned out to be yet another wonderful museum person I’ve met on my journey thus far. For her, I present the following montage, with the lyrics to that oldie but goodie, “I’m Your Puppet.” 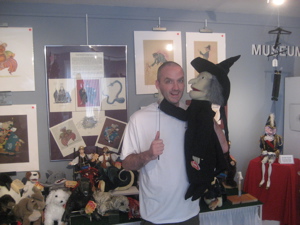 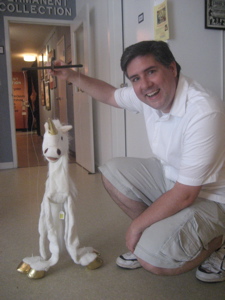 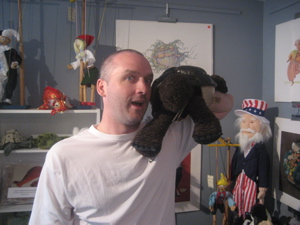 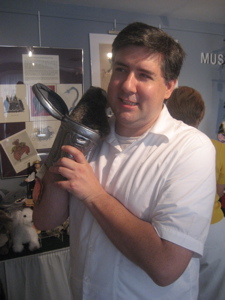 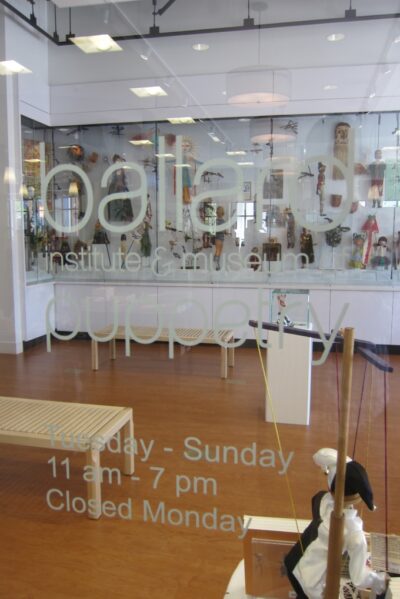 Several years later, I revisited the Ballard Institute and Museum not once, but twice. The first time was the week it completed its move to a wing of a new Barnes and Noble bookstore and the second was about a year later with my two sons. The new space is the opposite of the old: gleaming new building with tons of natural light and glass. 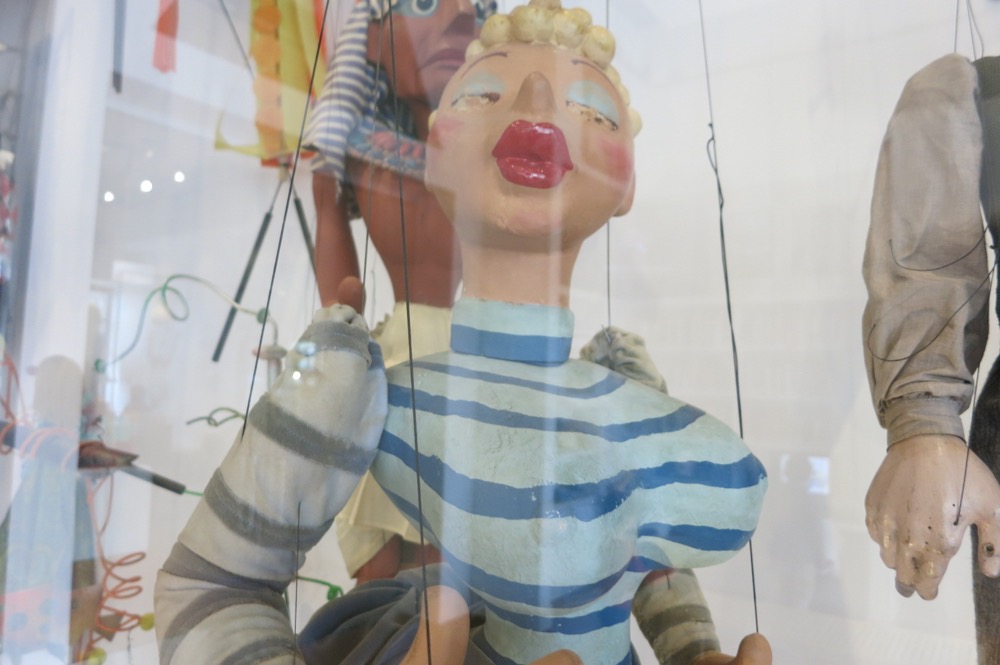 It’s bright and airy. People mill about the attendant bookstore. No more ghosts of inhumane treatment of people like my old special needs son in the air. UConn still has the pre-eminent puppetry program in the country, and the museum still houses one of the best puppet collections around. 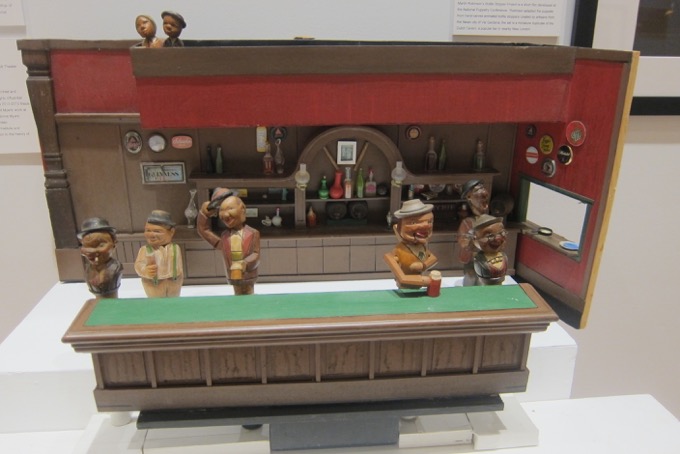 The Ballard Institute and Museum of Puppetry is one of America’s hidden treasures—a superb collection of over 3,500 puppets from all over the world; an archive of books, manuscripts, posters, drawings, audio-visual materials and photographs all covering the history of puppetry. It is also the new home of the Puppeteers of America’s Audio-Visual Collection: the largest collection of videotapes, films, and other media about puppetry in the United States. The Ballard Institute curates and produces exhibitions of puppetry, both at the Ballard Museum and for touring across the United States. The Institute also offers workshops, museum tours, artists’ forums, film showings, performances, and other events and programs that promote the art of puppetry as a twenty-first-century art form with deep historic and global roots. 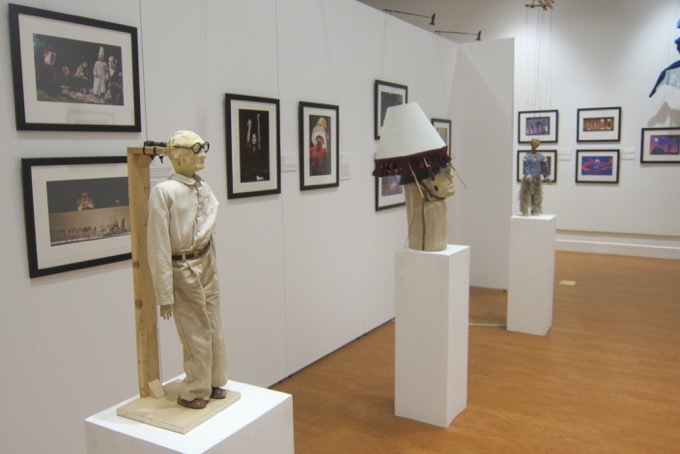 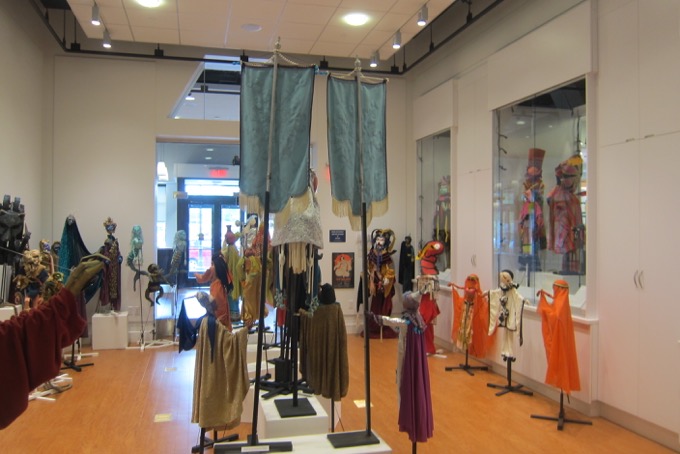 The focus now seems to be more on temporary exhibitions, as the space itself is actually smaller than the original location. Although… remember the women sitting on metal folding chairs in the “theater” above? Now there’s an actual theater: 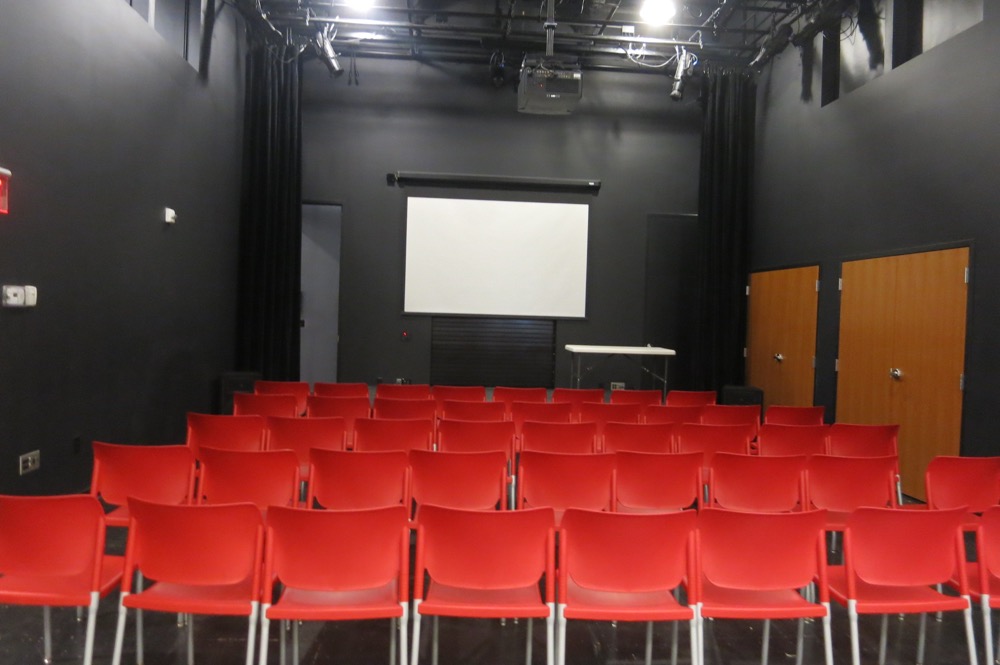 Looking at the museum’s website, the exhibits here change rather frequently – but are also comprehensive and put together really well. Remember, UConn has a whole puppetry program and MFA degree associated with it, so there are many people who have a vested and and genuine interest in puppets, puppetry, and the history of both. 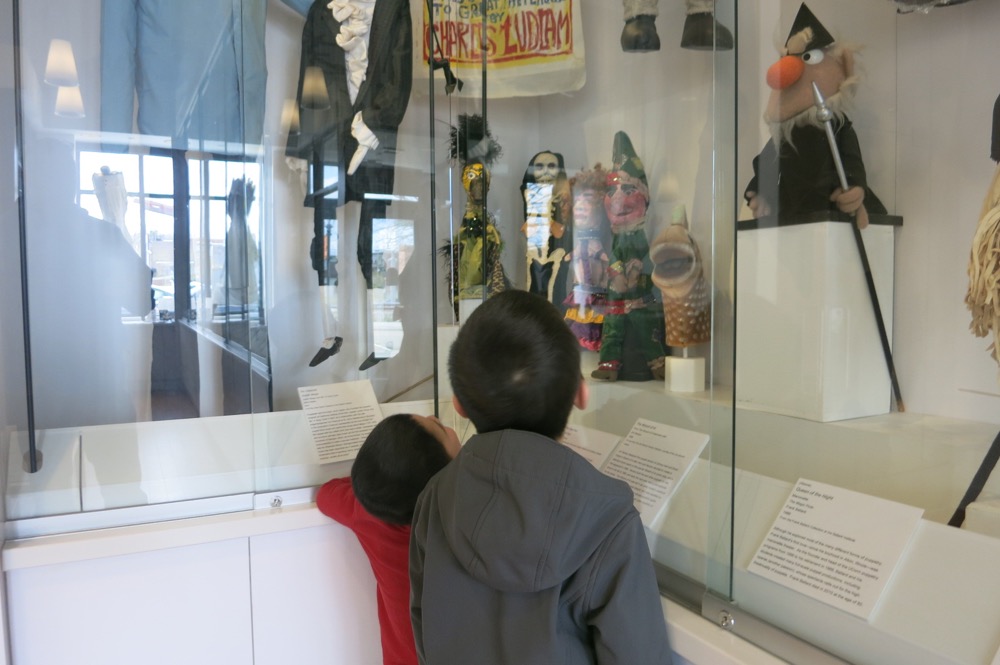 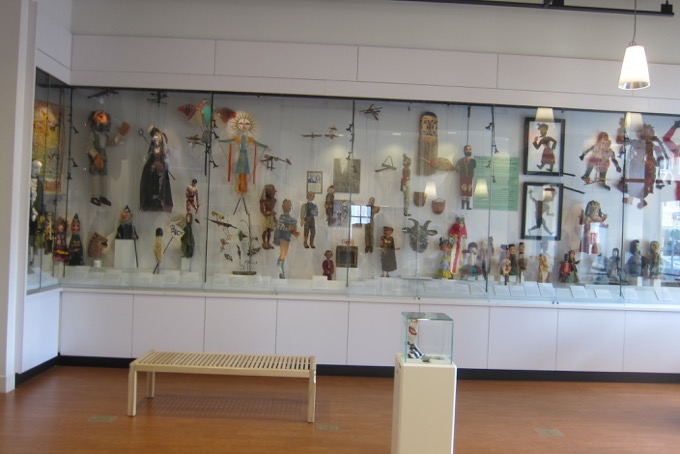 As for me, I think I find the mere fact that this place exists, that it’s so well-loved, and that my alma mater is pretty much the world’s best university for puppet people is just as – if not more – fascinating that the museum itself.

That’s not to say the museum isn’t fascinating! It is! And even if it wasn’t, it’s in a bookstore and that makes it one of my favorite museums to visit in the entire state. 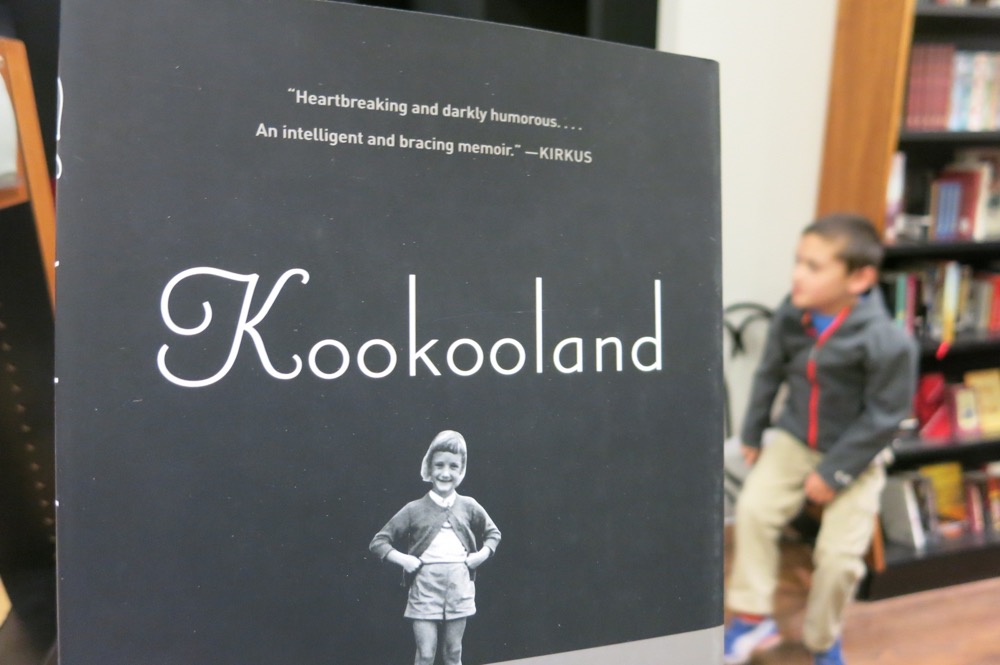 Apt book for Damian in the background