Note: This is an OLD write-up and as such it is a bit muddled with the tobacco museum in the same complex. This was written at a time when I didn’t differentiate museums as much as I do now. Since 2007, we’ve visited several most times, we’ve had another son, we’ve had black bears nearly in our house, and EdHill sadly passed away. These old pages make me sad sometimes. 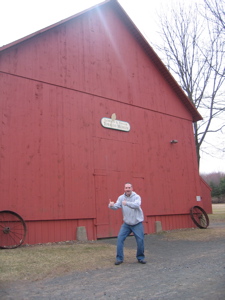 Luckily for him – because he really wanted to hit this particular museum (seriously, after I soloed the Edward E. King Museum of Tobacco and Aviation, he mentioned that he wanted to be sure to see the another tobacco museum in the state) since a previous visit without him to the park where the museum stands was a partial failure.

On a sunny Sunday in March, I loaded up the family and headed north about 15 minutes to Northwest Park in Windsor. I knew the museum was there, and I figured there would be a grassy knoll or two, but I was shocked at what this park held. Tucked away deep in the suburbs (which included a rotary causing Hoang to yelp, “Just like France!” Or New Jersey, take your pick. Same thing.) the park is HUGE and contains many miles of trails and a river walk and acres or forest and soccer fields and horse fields and all sorts of cool stuff. 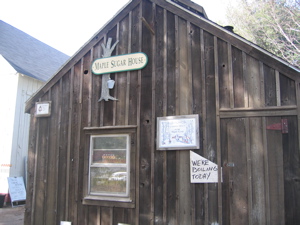 Cool stuff like a Maple Sugar House! On the day we visited, it was in operation as a man was boiling sap to make syrup – and was kind enough regale everyone with the details of how one goes about making syrup. I only half listened but did pick up that only 3 types of trees make viable syrup – the sugar maple, the coconut palm, and some birch tree out in Alaska I think. Good stuff. However, Damian was with us and quite frankly, he doesn’t know what syrup is yet so he didn’t so much care. 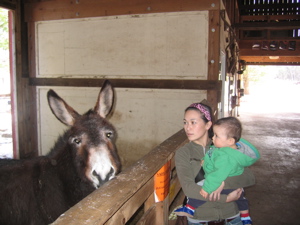 The next building in the complex housed a rather impressive menagerie; turkeys, goats, ducks, chickens, sheep, a burro! Damian was a bit taken aback by it all, but Hoang and I were excited to find a cool place to bring him when he’s a little older. Outside, we found a Scottish Highland Cow, which looks more like a yak, and some horses to stare at. Damian took more of an interest in the cow, and even attempted to pet her through the fence. 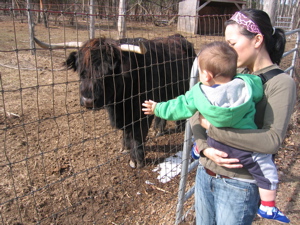 After the animals, the next building over was the Nature Center and gift shop. Inside the nature center were the typical New England woodland critter displays, geologic history dioramas, and child friendly playscapes. And oooooh, Hoang’s quest to see a live wild bear took another step forward, with a large stuffed black bear that she was so happy and proud to present: 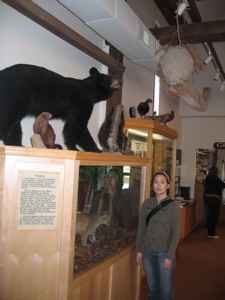 Damian, fully capable of taking down the bear by himself, was more interested in a more dangerous predator – a raptor of some sort! He even tempted fate and taunted the beast by sticking his hand in his mouth and laughing about it all. No fear in this kid, no fear. 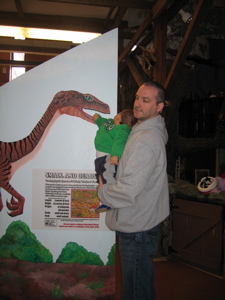 The following few paragraphs were added April 2009 after another visit.

I did not give the Nature Center portion of this complex its full due. Damian really likes it as it’s pretty small and uncrowded usually. There are some very interesting displays for adults (geology, meteorology) but more for the kids. In later visits, we found a relatively huge room that is used for concerts and lectures, but also had some rather confusing signs on the back wall… Like this one: 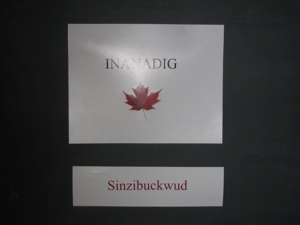 There is also a little gift shop and another play room for little kids, filled with books and puzzles, crafts and stuffed animals. Damian was sure to give each one a hug as he moved them across the room for reasons only known to him. He was also more receptive to the barnyard animals now that he’s a little bit older too. 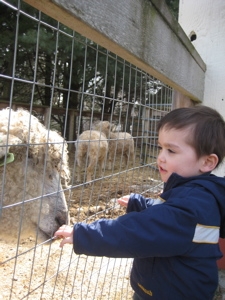 Whether you prefer a nice walk, barnyard animals, the nature center or the tobacco museum, this place pretty much has it all.

After the Center, we made our way over to the next building – The Luddy/Taylor Museum. The Barn was locked so we tried the glass doors to the more museum-y part of the place. We noted the large playground just behind the museum building, covered with kids. Hoang opened it and was confronted by a tiny elderly lady who seemed a bit surrpised to have visitors. It was about 3:15 or so and the museum would close at 4, but the kindly woman explained that she was quite tired and besides, the tour would take an hour and we were too late. But, “Don’t you dare not come back here,” she implored. I chuckled to myself and thought, “Oh lady, you don’t know what it is I do for fun, do you?” 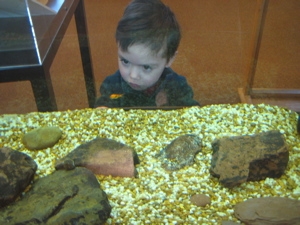 And so there we were – Damian and I, just a few weeks later back at Northwest Park to check out the Luddy/Taylor Tobacco Museum. Remember, these visits were very early on in the life of this website, so they are written sort of poorly/oddly.