Part 1 was a visit to the Quinebaug State Trout Hatchery 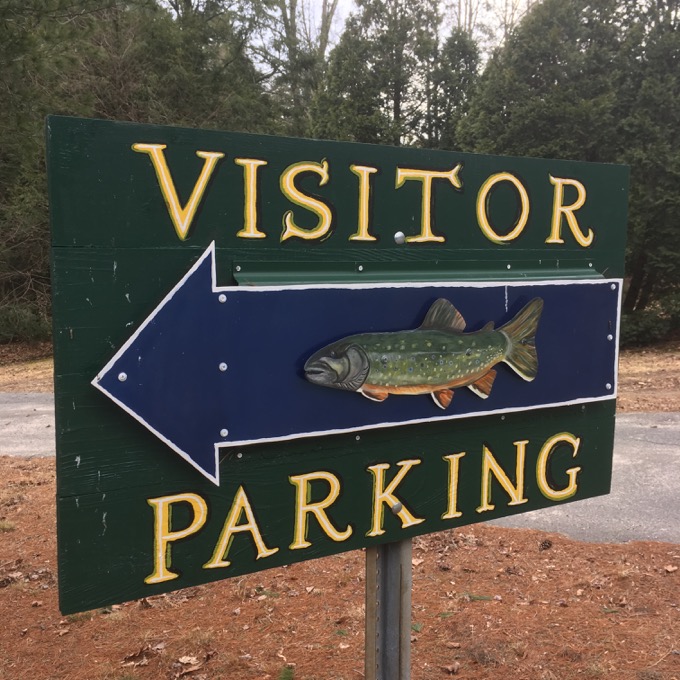 Who doesn’t love a nice fish hatchery? C’mon, you know you do. Heck, I apparently love them so much that just a few weeks after visiting the Quinebaug Valley Hatchery in Plainfield, I craved for more baby fish.

And not only that, a decade later in 2018, I made the trip back here with the boys so Calvin could take in all that the Burlington state fish hatchery has to offer!

But back to 2008… I found myself out along Route 4 with Hoang on a sunny March day. I was scouting parking spots for my Tunxis Trails hikes and decided to make a quick stop at the hatchery. 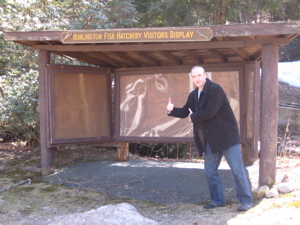 But before we got there, an aside. It must be noted that the following sign was stuck to a gas pump at the intersection of Routes 44 and 167 in Simsbury and it killed Hoang dead: 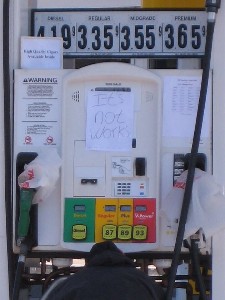 I just had to mention that. We drove on… fortunately, we had a full tank of gas. Once there, deep in the pine forests of Burlington, I immediately said that this place has a completely different feel. It reminded me of a Boy Scout camp. 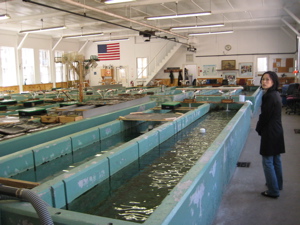 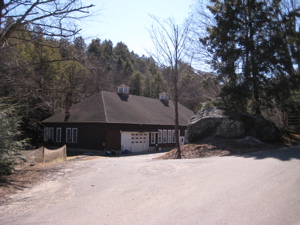 Unlike my visit to the hatchery in Plainfield, there were other visitors here. But they quickly disappeared up a trail. Hoang and I went to the building, which was completely devoid of people. We walked in, looked at a bunch of baby fish, and… that was that. There were no displays, no cool live fish tank, none of the stuff I’d seen in Plainfield. There are rectangle raceway rearing ponds here, which were new to me. 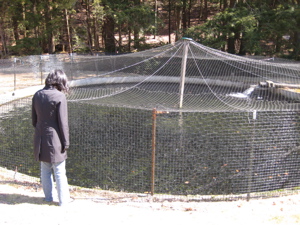 Before you are disappointed with my experience, there is some cool stuff to learn about this place – like how it was built in 1923 and is Connecticut’s oldest of the three hatcheries. Also:

Artesian wells and nearby streams provide all of the water necessary for the operation thereby keeping the electrical needs at a minimum and making this the State of Connecticut’s most cost effective facility. Being near the top of the watershed ensures that land development will have little impact on its future operation. The hatchery produces Brook Trout, Brown Trout, Kokanee Salmon and Rainbow Trout for Fisheries Management Programs. 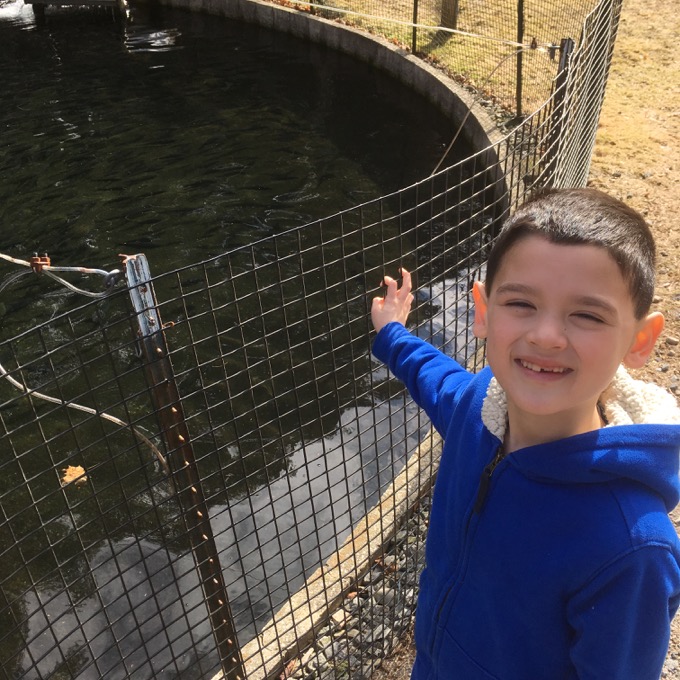 Do they mean that this place is the most cost effective facility of all state-owned facilities of any sort? I guess that makes sense. And is kind of interesting I suppose. What else?

One unique fish culture project is the Brown Trout “Survivor” Program. It is intended to produce a strain of fish that is better suited to survive in the wild. Ideally the “Survivor” strain will behave like a wild trout, will be more temperature tolerant, will have better avian predator avoidance and will readily reproduce. Annually, the Fisheries Staff collects fish from the West Branch Farmington River that have survived for more than one year and each fall transfer these fish to the Burlington facility to be used as brood stock. The offspring of these fish are returned to the West Branch Farmington River to grow and spawn thus increasing the number of “Wild” Brown Trout in the river. While research continues on the effectiveness of the program, the initial information indicates the program is working. Prior to these efforts there were few “Wild” Brown Trout in the West Branch Farmington River. Now “Wild” Brown Trout catches are commonplace.

That’s cool, but I can’t help but get a little sad about “Survivor” and “Wild” when neither is truly applicable. 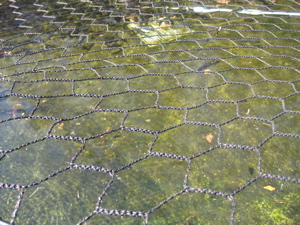 There are fish there, trust me

I must admit, Hoang really wasn’t too into the whole hatchery experience. So a decade later, I brought the boys for a visit.

Not much, if anything, had changed. The fish in the outdoor ponds were still purposely difficult to see fencing, overhead netting, and trout colored pool bottoms are in place to reduce predation. And this is prime bald eagle country. 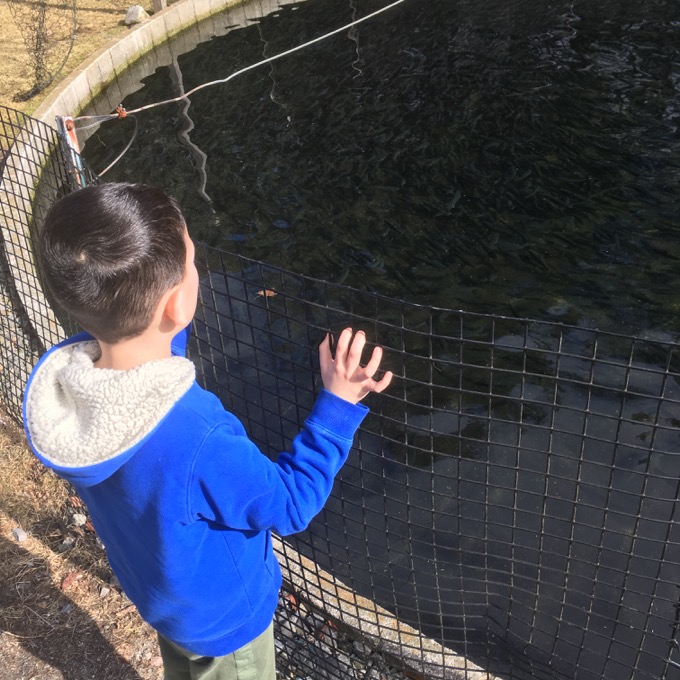 You can see the thousands of fish a bit better here

The building was locked during this second visit, which was pretty lame, but… budget cuts and all. A tank truck was parked and upon explaining to Calvin that the fish get put into it, driven to a river, and dumped out fat hose he simply refused to believe me.

I guess it is a pretty weird concept to a little kid now that I think about it. 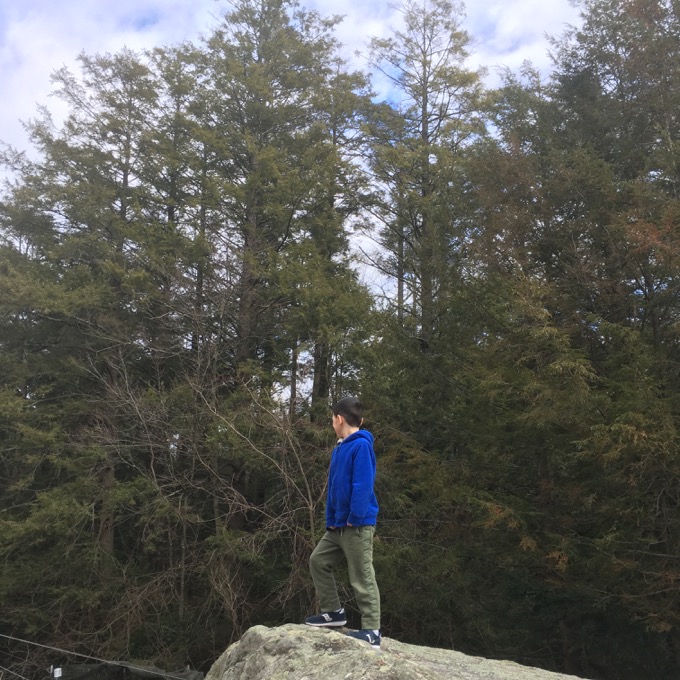 To sum up, the Plainfield (Quinebaug) operation is slick, huge, flat, open, antiseptic. The Burlington one is homey, quaint, hilly, and forested. Both have their positives (Quinebaug: displays, Burlington: location) and while my defining them as museums is tenuous at best, I’m comfortable with it. 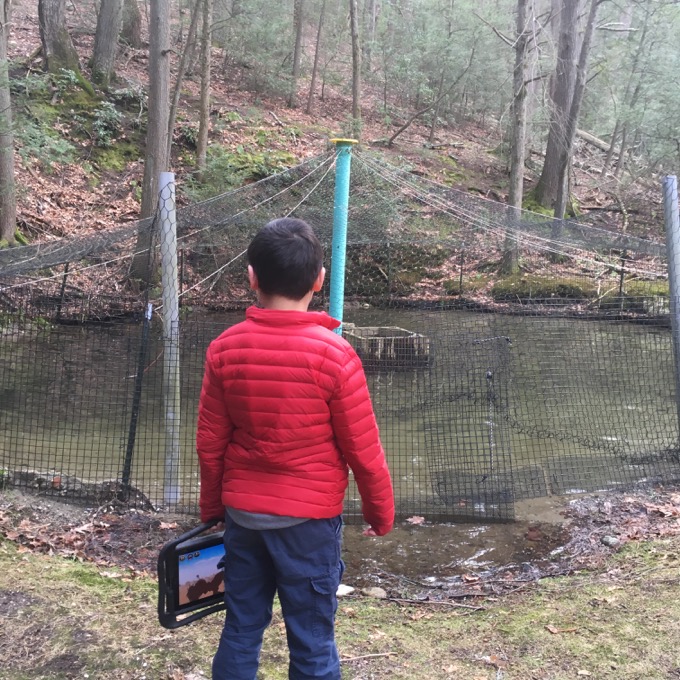