Our visits to the Burlington State Fish Hatchery 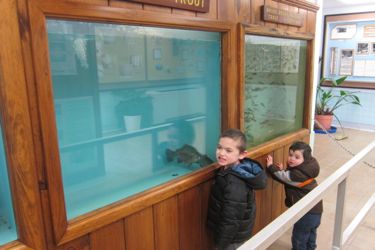 Right off the bat, no, I have not read Trout Fishing in America (nor do I plan to) and I’m not a fan of the wacky folk artists of the same silly name. And I don’t fish either. In fact, I’ve never been fishing in my life save for the few times my dad stuck a rod in my hand when I was five on some random pond in West Virginia. I vaguely recall a picture of me as a little kid holding a sunfish, but I could be mistaken.

And yet, I took ichthyology in college and really enjoyed it. (So much so I think I got an A.) Moreover, I took “Principles of Fisheries Management” which I really enjoyed and definitely got an A. I had some grand plan to study such things, plus aquaculture and genetics, and to use my knowledge to genetically alter the Homarus americanus – that is, American lobster – to breed out the inborn cannibalistic aggression and have them grow nice fat tails while I was at it. 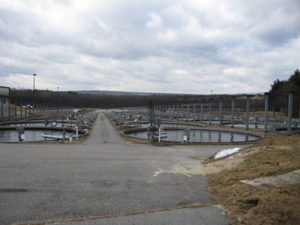 To date, this has not really been successful yet so lobsters are still caught at the bottom of the Gulf of Maine and continue to be expensive and on the decline. If I had stuck with that plan, and I was actually successful, suffice it to say I’d be a very wealthy lobster farmer today. Oh well. That would have required hard work and persistence – two things I wasn’t too keen on at the age of 22.

So why is any of this the least bit interesting? Because… um… because at one point I almost agreed to a paid internship at the Quinebaug Valley Trout Hatchery during college and thought that would have just been the coolest thing. But then I realized I needed a car and that wasn’t about to happen at the time, so I kept my on-campus job. 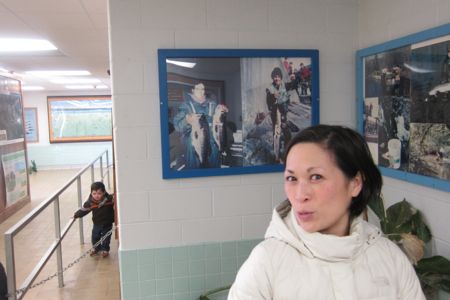 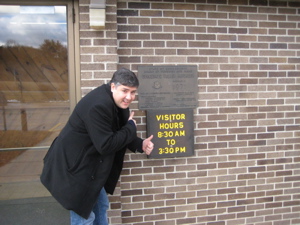 My friend EdHill and I stopped by the Quinebaug hatchery during a day-long CTMQ tour and we were surprised to find the large parking lot completely empty, save for one lone pickup.

We entered and were alone. One of the largest hatcheries in the East, this place produces 380,000 pounds of trout annually. The museum(ish) portion of the hatchery is self-serve and somewhat small. But it’s chock-full of good info on trout and other freshwater fish of Connecticut! And, more importantly, lots of information regarding the Quinebaug hatchery! 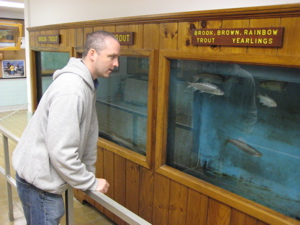 Things like, “Over six million gallons of water are used daily to keep the water of the hatchery clean, cool, and well-oxygenated.” This is twice the volume needed for Middletown per day.

There was a long explanation of how this isn’t wasteful and described the unique geology of the area. I guess I buy into it. 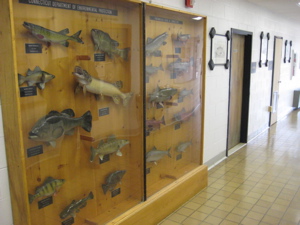 Traditionally, hatchery rearing pools have consisted of long, narrow raceways – like at the state’s oldest hatchery in Burlington. Back in the day, circular pools were experimentally tried at the Burlington and Kensington hatcheries with great success, so that’s how the entire Quinebaug was built. The advantages are that the pools have evenly distributed temperatures and currents. The key to hatchery success is uniform EVERYTHING throughout. 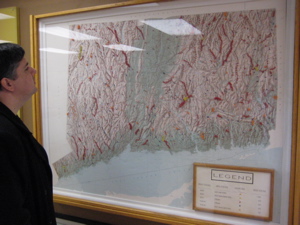 We weren’t allowed into the area where they take care of the tiniest of trout, and the worker in there eyed us warily throughout our visit. What, you mean you don’t often get two guys taking 20 pictures here?

The secure spawning area and the hatch house are managed for disease prevention and monitored for quality assurance. The photoperiod (length of daylight) of the fish is manipulated for controlled growth patterns as determined by the needs of Fisheries Management efforts. 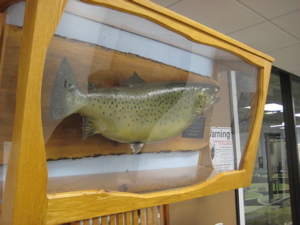 The Quinebaug hatchery only rears trout: brown, brook, and rainbow – and supplies most of the trout stock in the state. (Burlington and Berlin raise salmon as well.) There is a display on how hatchery workers squeeze out the 3000 eggs and then fertilize it with the milt of the male trout. Ridiculously, Ed turned away in disgust at the picture. There were other displays on the current record trophy fish of Connecticut and a few other small little things on invasive species and local natural history. 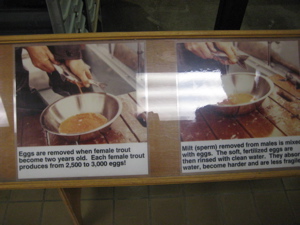 Once back outside, we checked out a few viewing ponds that were very difficult to view. They have black bottoms so as to camouflage the fish from predatory birds and try as you might, even though there are hundreds of foot-long trout 3 feet away, they are nearly impossible to see.

We peered out over the vast array of rearing pools, gave each other a fist bump, and hit the road. Minus the fist bump part. 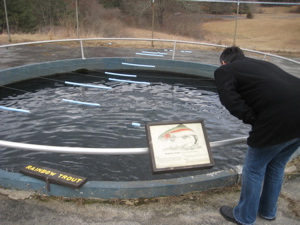 So there we were, now a family of four driving out lovely Route 14 towards Sterling, when I suggested to Damian, “Do you want to go see some fish?”

Hoang eyed me warily – for we were on our way to get ice cream at Ekonk Hill Dairy – but the detour north up to the hatchery is only a couple minutes. And, it can’t be denied, our boys love watching fish. 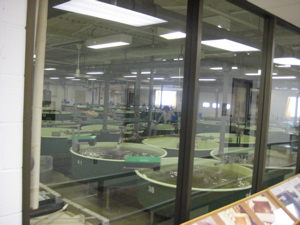 Once again, the place was completely empty. That was fortuitous, because our youngest one, Calvin, was intent on crossing every single gate/chain he could find. What is it with 2-year-olds?

The place hasn’t changed at all, save for a few updated record fish pictures and I believe they no longer allow little kids to fish the trout ponds like they used to.

The fish in the display tanks look sad and tired, but as a place to learn stuff about the state’s trout stocking programs, it is still a stellar visit. 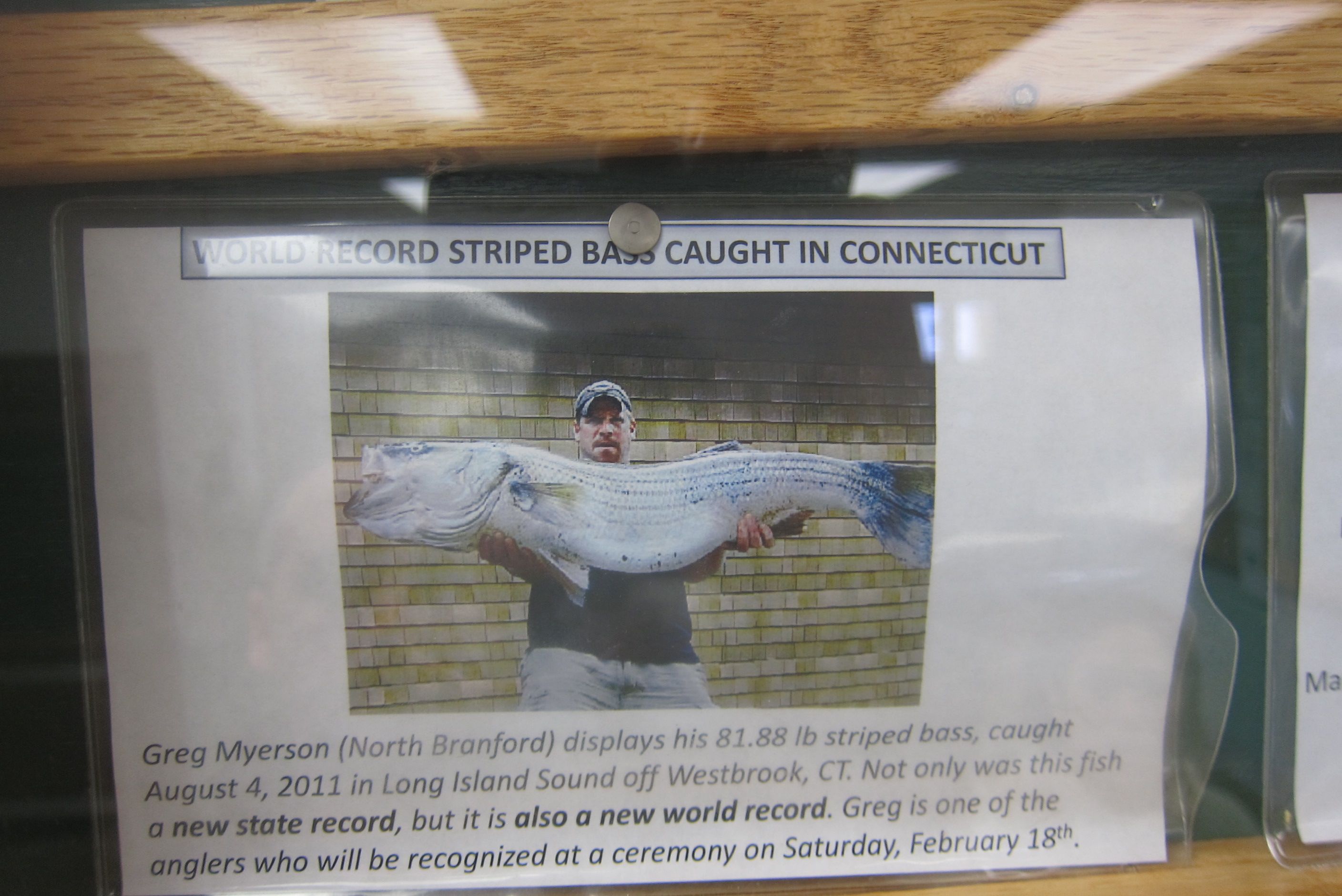 Connecticut guy caught the world record striper off of Westbrook since my first visit!

Our boys loved it, despite the tiny size, relatively few fish, and impossible to see outdoor pool fish. So the lesson here is that little kids can have fun pretty much wherever you go – so just go. 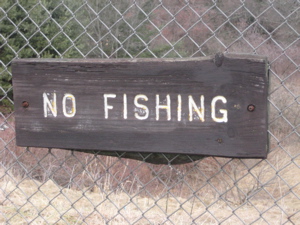