Quick question for you locals: Where’s Danielson? Where’s Killingly? Trick question… Apparently, Danielson is actually not a real town, but rather a Borough of Killingly. So even though all the highway signs say Danielson, and we always hear about the police troop D out of Danielson, Danielson is a mere borough, which doesn’t even count towards CT’s 169 towns. This is not to be confused with the Killingly villages of Attawaugan, Ballouville, Dayville, East Killingly, Rogers, and South Killingly. Confused? Bored? Well, then you must make the trek out to the Quiet Corner to visit the Killingly Historical Society Museum! Which is, of course, in Danielson. 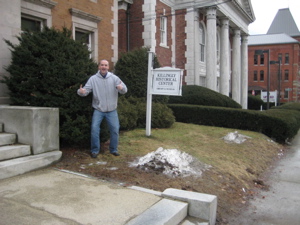 EdHill and I made the trek out to the northeast corner of the state to find this little museum. And when I say little… I mean teensy. I’m 40 museums into this project and this is the smallest thus far. That said, the lovely women we spoke with certainly made up for any lack of material here.

When I began this whole “visit every museum” thing, I didn’t realize how many of these tiny museums exist. I kind of love them though… From the museum brochure:

Sawmills and gristmills… waterways… Killingly grew up as a collection of small mill villages… In 1836, Killingly was considered the greatest cotton manufacturing town in Connecticut, and in the 1920’s it became known as ‘Curtaintown, USA.’ 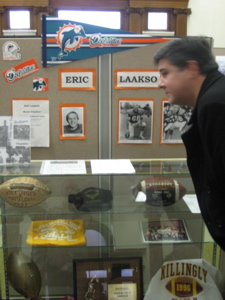 Several figures of national importance were born in Killingly. Mary Kies, first woman in the US to receive a patent. The founder of Tiffany’s in New York, Charles Tiffany.

So it wasn’t really “several,” but two. Since you’re dying to know, Kies invented a process for weaving straw with silk or thread, and the museum offered up a portrait and a fairly indepth essay about Kies and her invention. 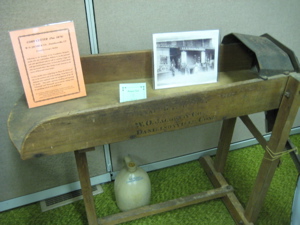 Before moving on to the rest of the museum, allow me to set the scene. Downtown Killingly looks sort of like it got stuck in 1957 but yet, it is populated by distinctly 21st century disaffected youth. The Historical Society building is a handsome brick affair, at the far end of Main Street. Once inside, the museum is on the left, the library is on the right. It all seems rather thrown together, but that only adds to its charm.

Honestly, the museum can be experienced in 10 minutes or so. And it is random. It pays tribute to some people you have surely never heard of – and never will again. I think we agree that Ms. Kies above deserves a display… but how about Ida Bailey Allen? Born here in Danielson, she then moved to Worcester, but that doesn’t matter. For Ida Bailey Allen became food editor of Good Housekeeping as well as the President and founder of the National Radio Home-Makers Club. That’s… something. 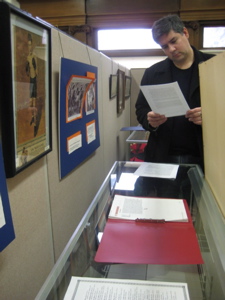 The first room we explored was the “Robert Allen Spence Museum” and I cannot determine who Robert Allen Spence was, so at least Ida Bailey Allen has that. But trumping them both is none other than Larruping Lou Brouillard, who rated a whole display case. But since you’re all familiar with Lou, I’ll just move it along.

What? You’re not? Oh… well, he’s wicked famous here in Killingly/Danielson because he was born in Quebec and became famous and lived in Boston. Errr, because he grew up for a few years here I guess – and later became world boxing champion in both the welterweight and middleweight classes. This was all back in the 1930’s and he was relatively famous for beating up a couple of Hitler’s Aryan Nazi boys back in the day. 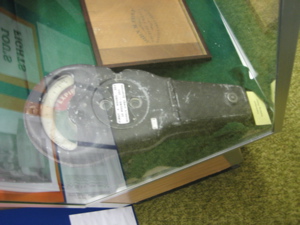 Buried elsewhere, the town here is still proud of their tenuous ties. Says the display:

“Lou Brouillard was named posthumously to the International Boxing Hall of Fame as part of the 2006 class. What a tribute to a Danielson boy!” Indeed. 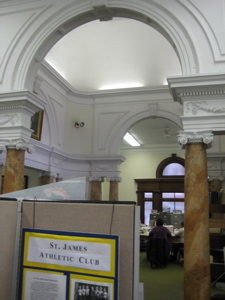 Football? Yes, this town loves its football. There was also a display about the high school team but then the big one: A tribute to none other than Eric Laakso! THE Eric Laakso! His entire pro career was with the Miami Dolphins where he played various positions on the offensive line in from 1978-84.

I love this place. 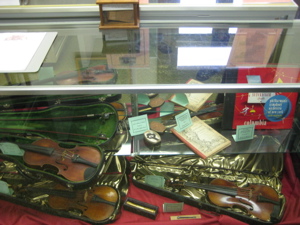 We moved over to the Natalie L. Coolidge Museum portion of the museum. No idea who she is [*See comment section below!] either, except that she wrote a bunch of articles for the historical society. Her room contained nothing other than an old authentic flag, a tiny multimedia center, two women so intent on their research that they didn’t notice two out-of-towners taking picture of odd things, and a bunch of books.

Not content to call it a day, I thanked the women in the back room and did it… I asked the question that I’ve had for every Connecticut historian I’ve ever met: “What the heck is up with the town/village/borough/section thing in this state?! Am I in Danielson or Killingly?! WHYYYYY?!!” 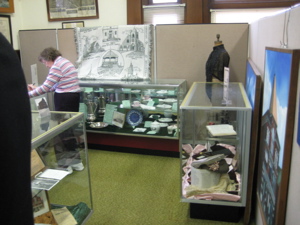 What followed was a twenty-five minute explanation that really only served to confuse me more. It’s hopeless. It’s maddening. It’s confounding – but in the end, it’s also quaint and historic and unique I guess. The informative woman (and the others who chimed in to add their two cents) was fun to talk to. She’s a Ron Paul supporter and when I suggested how great it would be if he became president and each town could go back to having its own currency that doesn’t exchange with every other town, her face lit up and she said “Yes!”

And that was our cue to exit. 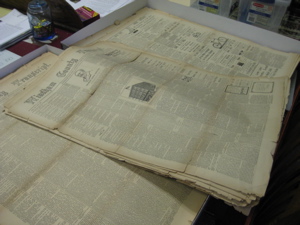 Stacks and stacks of the 19th century original copies of the Windham Unprotected, uncovered, free for Ed to sneeze on.

2018 Update: Y’know… this was another of my early write-ups that I cringed a few times when re-reading. I’ve eliminated some of the icky tone that pervades a lot of the first 50 pages on CTMQ. It wasn’t that bad, but it was played out. Also, upon re-reading this page for the first time in seven years, I notice that this little museum actually contains two museums. Had I visited later than 2015 or so, I’d probably bill this as three museums.

Because that’s what I do.