A funny thing happened at this little museum: I didn’t take a picture of the star of the show… the Belle of the ball, Maxine. Now, getting a picture of the vintage 1940 Mack fire engine would have been very difficult, owing to the small space of the garage that houses the museum. But still, as I sat down to write this page and went through my pictures I said to myself, “Dude, I think you missed the point of the Hockanum Hose Company Fire Museum.”

And so, I just spent far longer than you’d believe trying to find a picture of the lovely Maxine. About as long as Calvin and I spent at the museum itself. Please enjoy and savor: 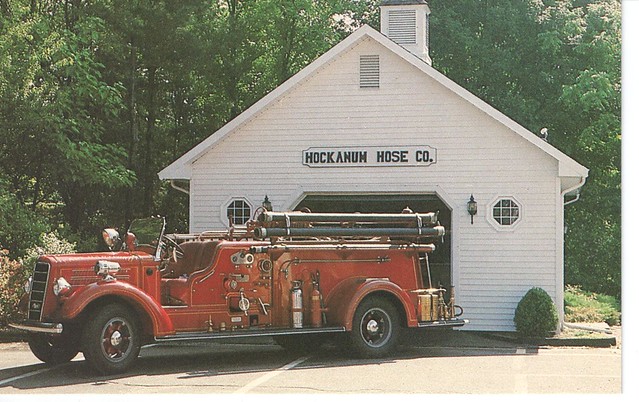 That picture is from one Sandra DiCicco who made my search more challenging by naming her picture “Hockanum Hoce.” So thank you, Sandra! I enjoy a challenge.

Of course, “I enjoy a challenge” is an understatement for any of you who have more than a passing appreciation of this website. The whole “CTMQ Town Guides/Town Completion” nonsense I’m doing is perhaps one of the greatest challenges anyone has undertaken regarding Connecticut. The process, essentially, began in 2006 when I began cataloging all of our state’s museums and I’ve never stopped. 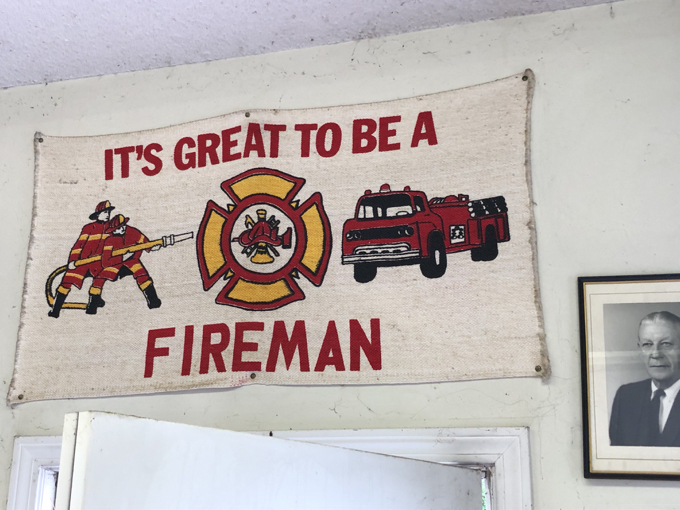 I published my East Hartford Town Guide and then set about “completing” the town in early 2019. Satisfied with myself, I tweeted to the world, “East Hartford, Complete!”

Ten minutes later I received a reply: “Have you checked out the small Hockanum Hose Fire Museum?”

Turned out, East Hartford was not completed. Shout out to Mr. Bill Flood, Assignment Editor at Hartford’s FOX 61 News for enlightening me. Now all I had to do was figure out when the tiny mystery museum was open… and a few days later, I had a personal invite to check out the place with my son. 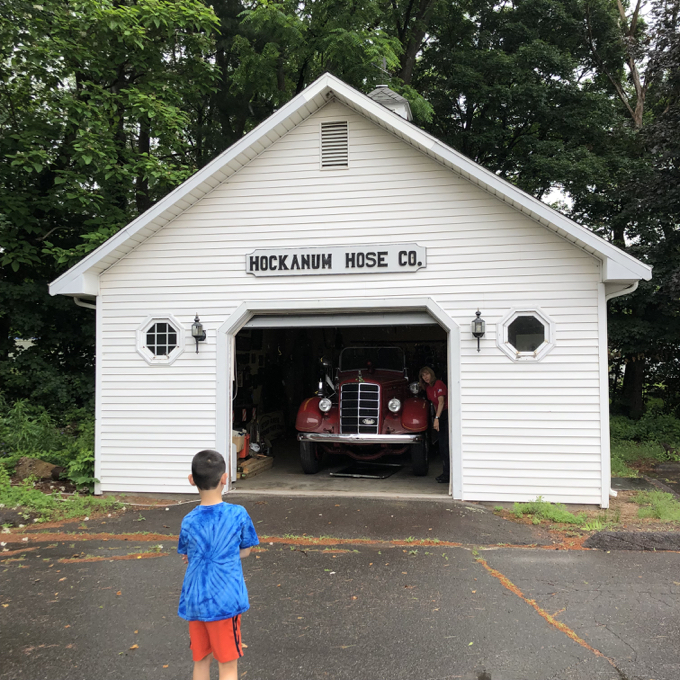 My next challenge was coming up with the reason we wanted to visit on a random weekday morning. I did what any responsible parent would do and shifted the burden to my 8-year-old.
“Calvin, dude, here’s the deal. You are totally into fire engines.”

“What? I don’t care about fire engines.”

“No, seriously, these people are going to ask us why we’re here and I just need you to pretend you wanted to come and see the old timey fire engine.” 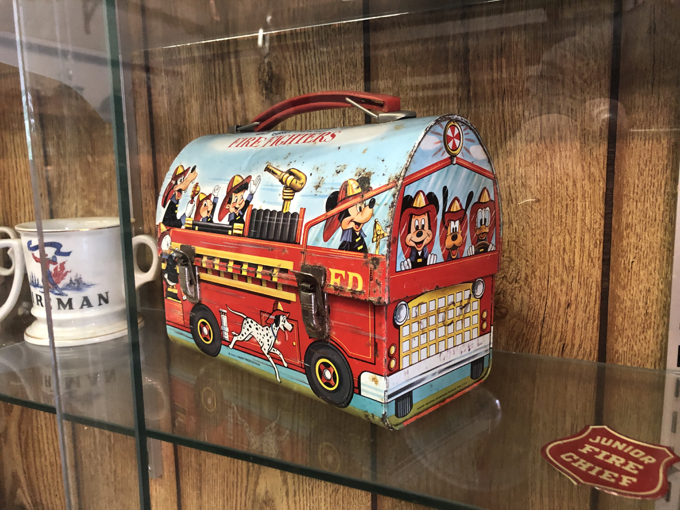 We arrived and were warmly greeted by two firefighters, whose names I forget. They were super nice though. And they also immediately asked, “So, why are you here? Are you a fireman or just into fire history?”

“Nah. Neither. My son Calvin here is totally into fire engines,” I said, as he climbed up into the driver’s seat of Maxine.

“That’s great! Calvin, do you want to be a fireman when you grow up?” 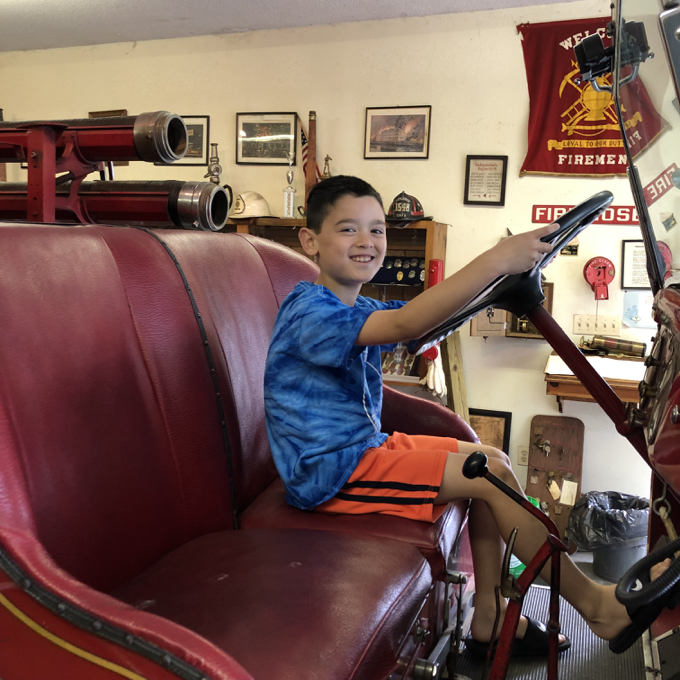 And with nary a pause, my beautiful and brilliant child responded, “It’s on the list of possibilities.” I have never been prouder as his father. This entire story is absolutely true, by the way. I feel it necessary to tell you that for some reason. It was, perhaps, the highpoint of his week between the end of second grade and the beginning of camp. He could have sold me out, easily, but he came through. Love that kid.

As Calvin kept up the ruse, I poked around the little museum. There are, of course, a dozen or so similar fire museums around the state. Collections of firefighting equipment of yore. Pictures of previous generations of firefighters. Annnnnd, that’s pretty much it. Regardless, I love these little places. Here is the museum’s write-up about itself – which you won’t find anywhere online. Well, until now I guess. 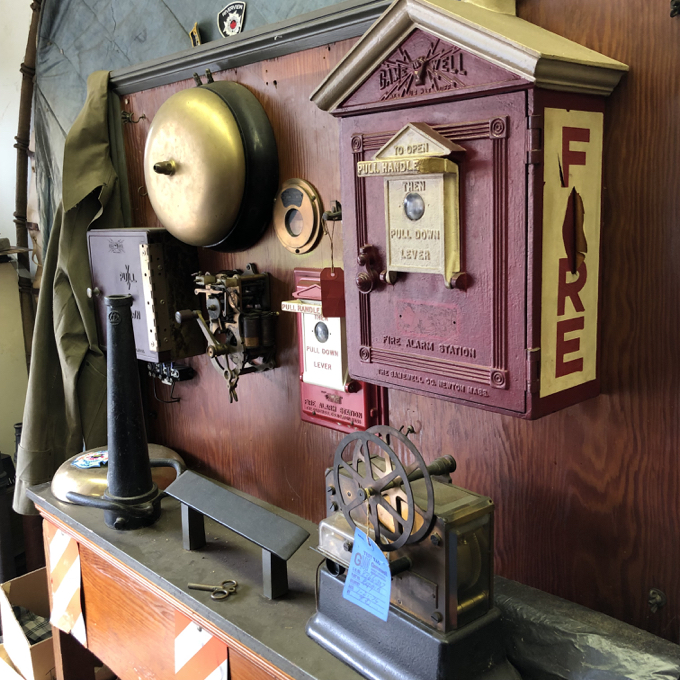 Hockanum Hose Co., located behind Engine Co. #6 on Forbes Street is the home of East Hartford’s vintage 1940 Mack Fire Engine and a delightful museum of memorabilia.

From 1940 to 1971 the 500 gallon pumper served at every major fire in town and in her early days “Maxine” pumped for almost a week at a fire at the Town dump.

This story led to a discussion about Centralia, Pennsylvania. A lovely town that Hoang and visited in 2004. Centralia is infamous for being on fire now for 40 years or so. There are underground coal seams that caught fire and will continue to slowly burn for hundreds of years to come. 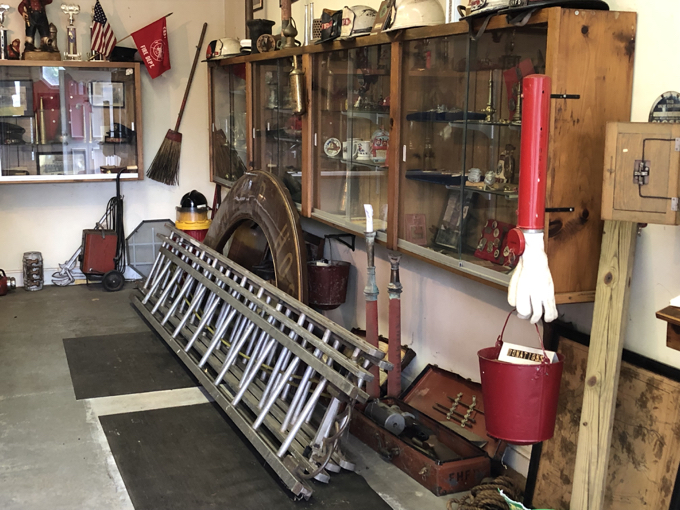 In the 1970’s she pumped for two consecutive days at the blaze which destroyed a shopping center on Main Street. In the spring of 1976 “Maxine” embarked on a campaign to become an award winning piece of firefighting apparatus. Numerous trophies attest to the unique appeal of East Hartford’s own “Maxine.”

In an effort to give Maxine a home when she was in danger of being sold, she now lives among a great deal of fire paraphernalia in a Fire Museum built entirely with volunteer labor. The Museum chronicles the history of firefighting in our town from its beginning as a volunteer department to its present day status as a paid professional department. Firefighting equipment and related items are on display. 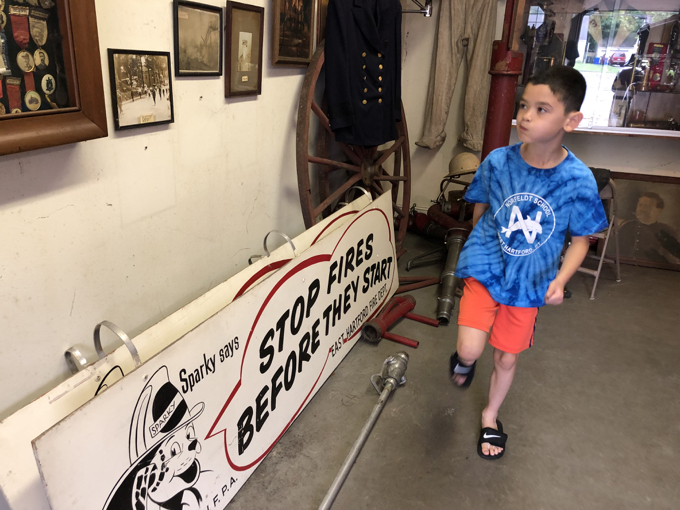 Indeed. Calvin pretended to be interested in all of that firefighting equipment and I very much enjoyed my conversation with the firefighters who welcomed us. They were great, and frankly, the mere existence of this museum is great.

Maxine still runs (though not so great) and appears in town parades. The relics of the fiery past are safely secured in the garage museum and now… now I can say that I’ve completed East Hartford!*

*This was not and perhaps never will be true. But we’ll be okay. 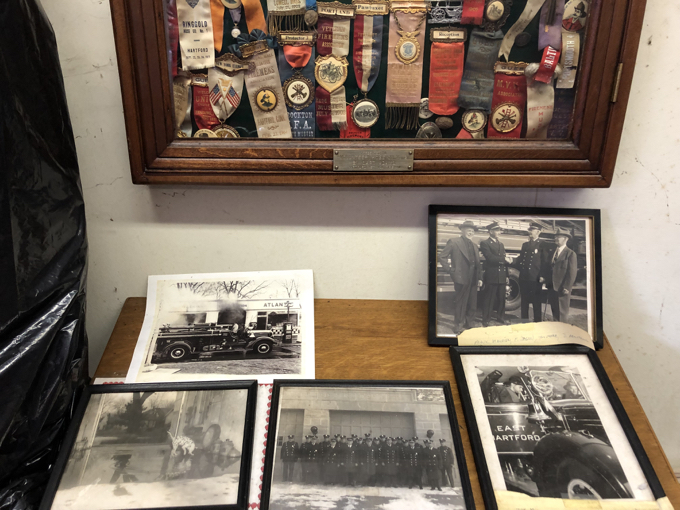