The pandemic year of 2020, we can all agree, was pretty terrible. My little family of four was fortunate to make it through the year uninfected, but we knew many who were not so lucky. Calvin and I remained as active as we could, hiking and cycling around the state. 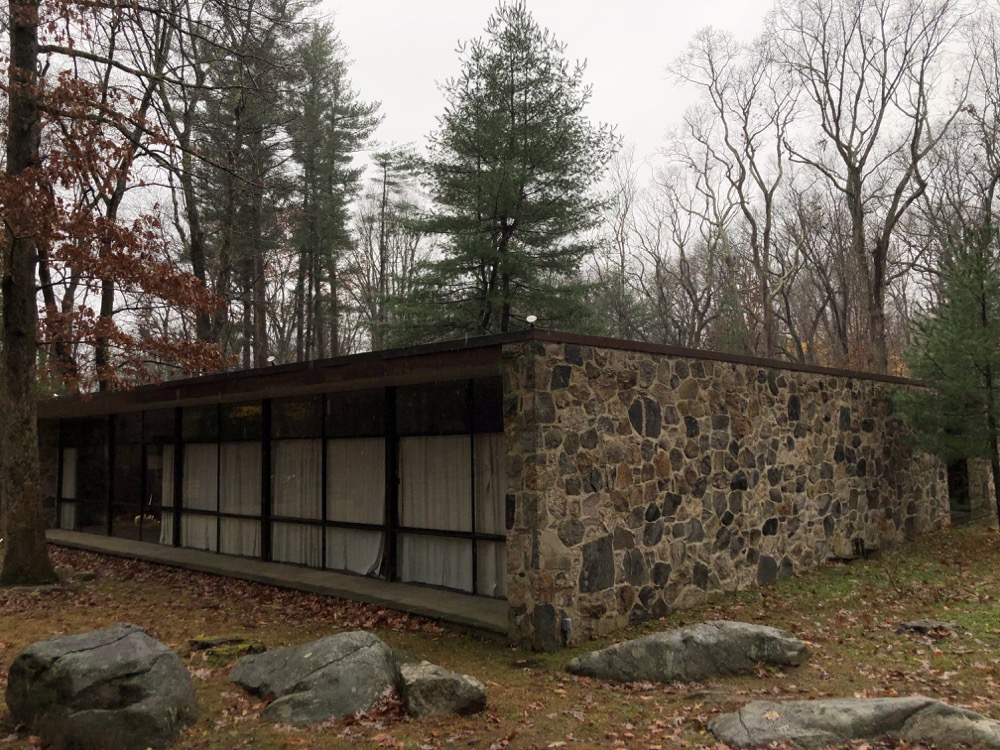 I had made it to a few museums before the virus lockdowns went into effect, but was only able to collect two more from late March through the end of the year. One of those was this place, the Noyes House deep in the heart of New Canaan. And it’s not really a museum. Hey, I took what I could get in a pandemic.

I’m not exaggerating when I say that this was my wife’s singular outing in 2020, aside from some shopping trips here and there. (Okay, we managed to escape for a week to Cape Cod, but pretty much did nothing there.) But that’s fine because my wife is a huge fan (and former student of) mid-century modern architecture and design. The Noyes House would be worth the effort, no matter what it took. 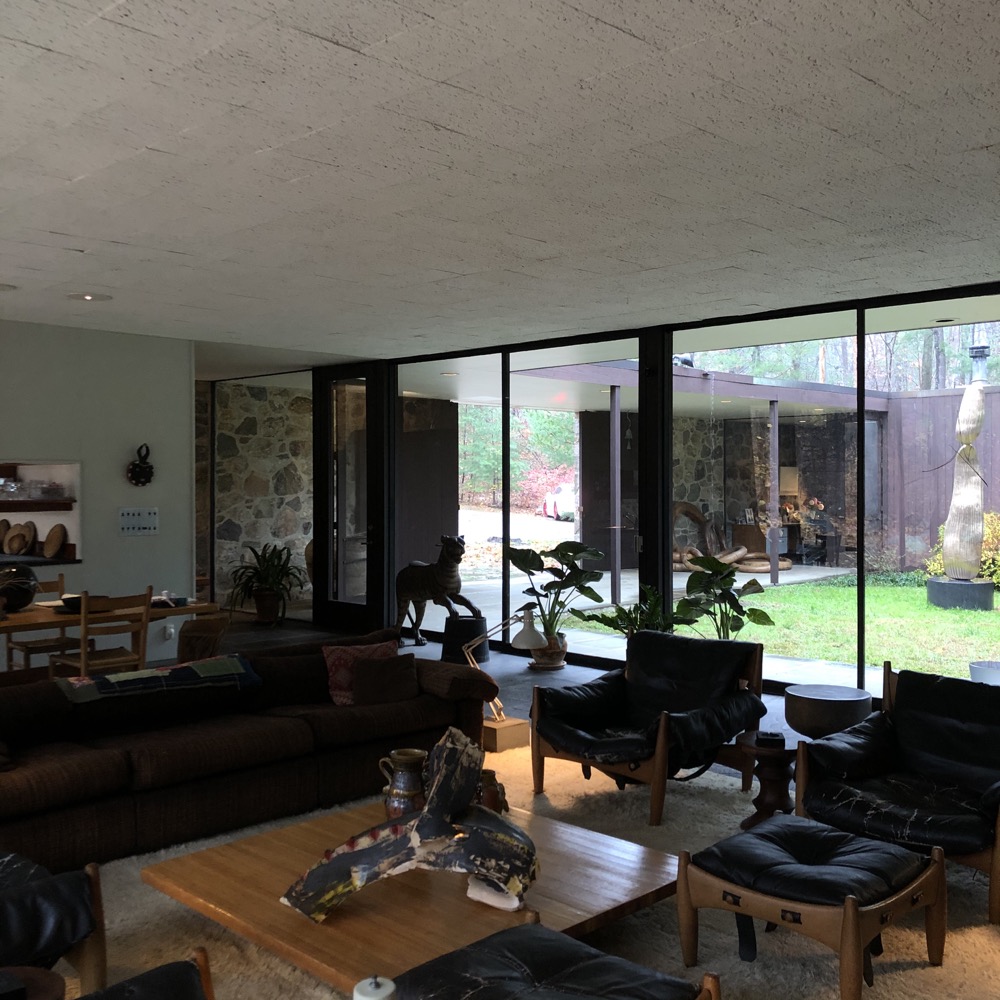 The originally planned autumn weekends of appointments filled up within minutes of becoming available online. The private tours were hugely sought after among those in Brooklyn and Manhattan with an interest in these things. The CTMQ name carries no weight in wealthy New Canaan circles I’m afraid, and we were out of luck.

Fortunately I’d reached out to the organizers and convinced them to open it up for some other weekday dates. (Well, I did reach out to them namedropping CTMQ and explaining how my wife is awesome and deserved a tour and of course none of that had any effect, but the hordes of others who missed out were vocal enough to add a few dates.) I nabbed a time and day and all was well. 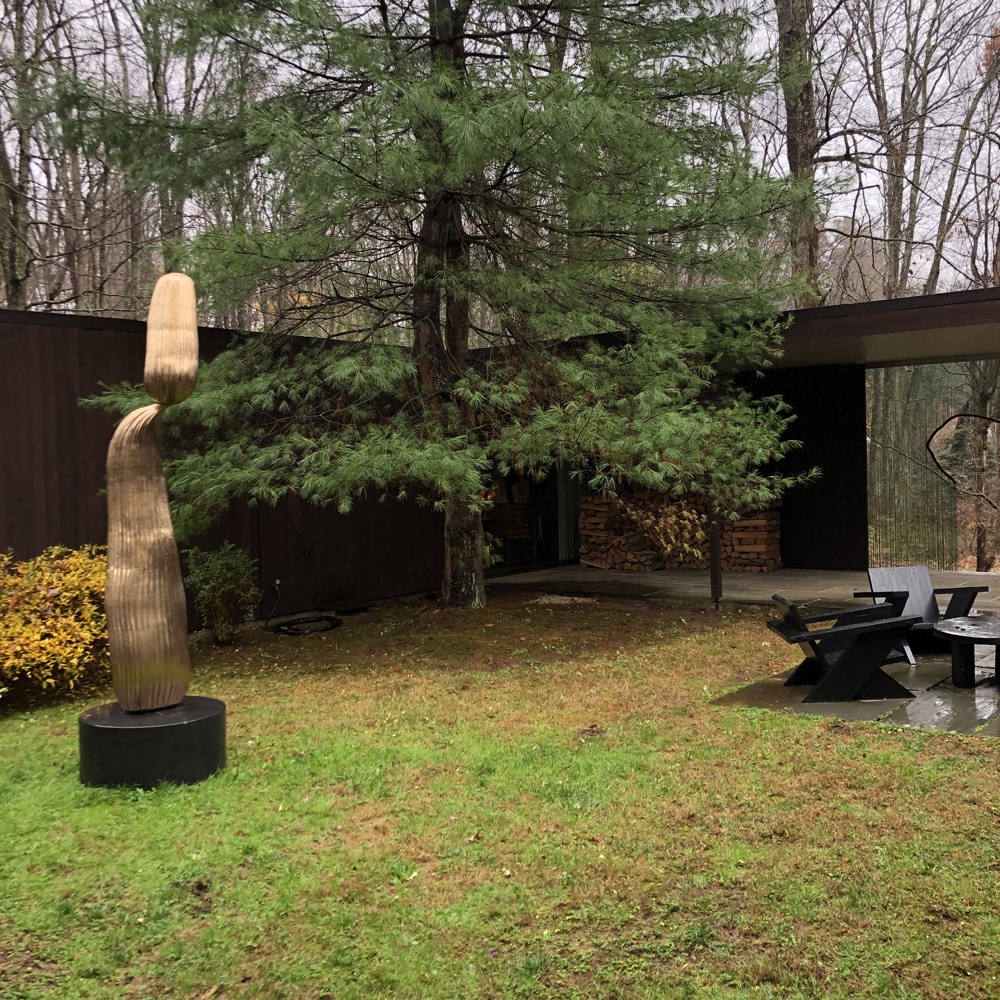 A few things… this house is still a private residence, inhabited by the family of the famous architect. It is not a museum, but it is recognized as an immensely important existing example of mid-century architecture. In fact, it was one of the first houses designed by one of The Harvard Five, that group of guys who studied under Walter Gropius and experimented with the new school of design, largely in New Canaan.

The Noyes House, as this is known, was built to be as much of an art gallery as a residence. Noyes was friends with Alexander Calder and other art-world luminaries so he was able to fill the house with important works from world famous artists. The Noyes’ just knew the right people…

Like their close friends Charles and Ray Eames out in California, they surrounded themselves with a creative mixture of fine art, folk craft, tapestries, African sculpture and Americana (notably including several carousel animals). As part of this collecting activity—described by Noyes as “a small, intermittent, economical operation but done with tremendous excitement by the whole family”—treated their living room table as a sort of exhibition-in-miniature, setting upon it small scale works by Calder, Joan Miró, Pablo Picasso and others. For anyone that associates Modernist display with white-walled galleries and strict disciplinary hierarchies, their characterful, ecumenical approach will come as a surprise. 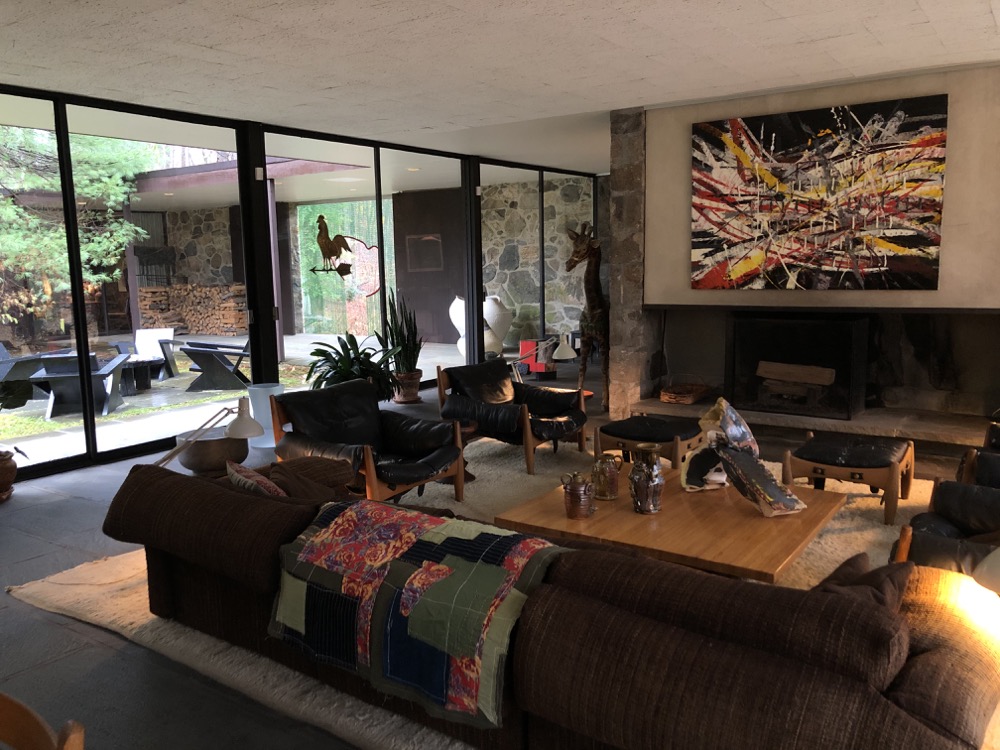 And this wasn’t exactly rare here in New Canaan, bastion of mid-century modernist architecture. Most people are at least aware of Philip Johnson’s Glass House, but there are (or at least were until people started razing a bunch of them), many others from other architects. And it was actually Eliot Noyes who first bought land and built in the woods of New Canaan in the 1940s. The others simply followed his lead.

Noyes’ was a good lead to follow. At various points in his career, he headed MoMA’s industrial design department and worked on design projects for IBM and Mobil. He was prolific and while probably not considered “cool” back then, he was most definitely cool. And his family is cool for opening up their private home for the exhibition… it was called “At the Noyes House: Blum & Poe, Mendes Wood DM, and Object & Thing.” Just rolls off the tongue, doesn’t it? 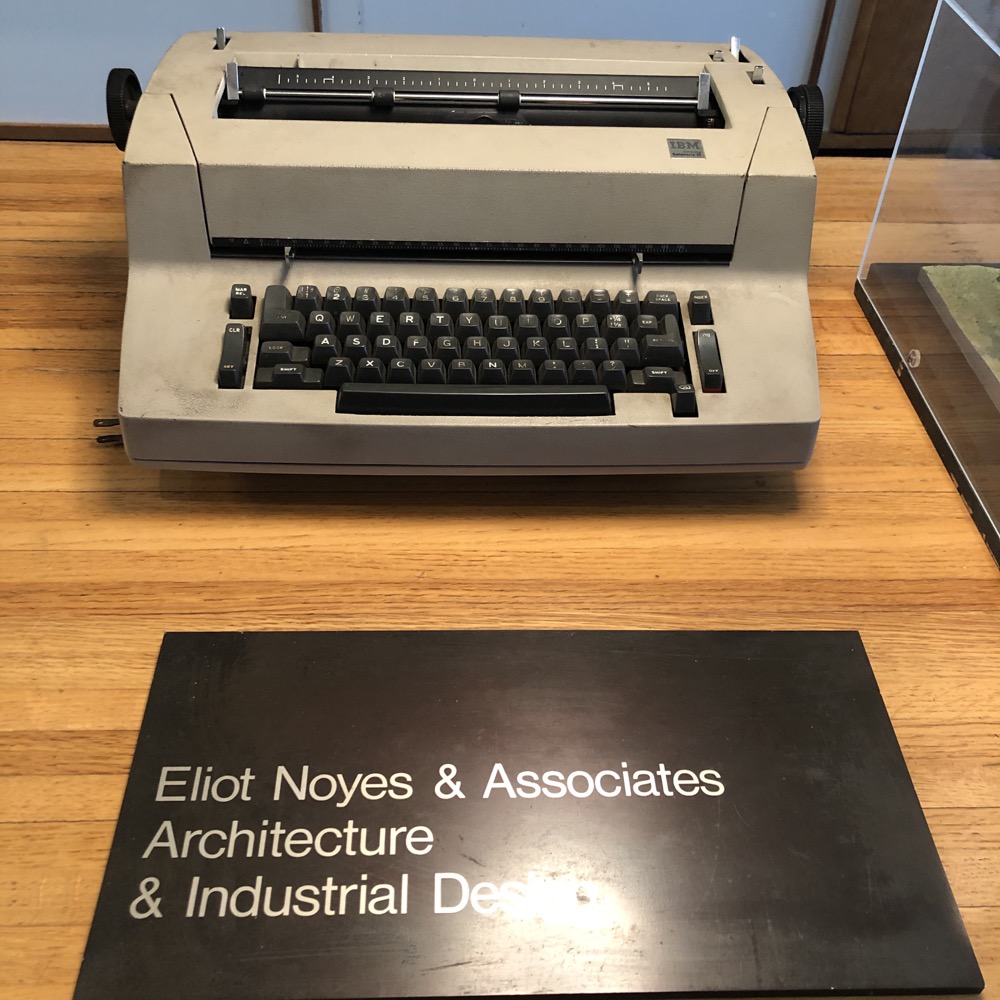 In short, the three organizations who put together the exhibition are hip art gallery owners. Object & Thing was founded by a local New Canaanite named Abby Bangser who set this event up in response to her more typical gallery events being shuttered due to the pandemic. She got Blum & Poe and Mendes Wood DM to help install art at the house, named it the Noyes Gallery for the duration, and that was that. Ah, so it was a museum for a few weekends in 2020 at least.

Hoang and I arrived on a dreary November day while our kids were plugging away at school. We were greeted by an enthusiastic young woman who seemed pleased that we drove an Outback and wore normal people clothes. (The couple who arrived to tour after us drove a high-end Porsche and wore pastels. I’m not kidding.) 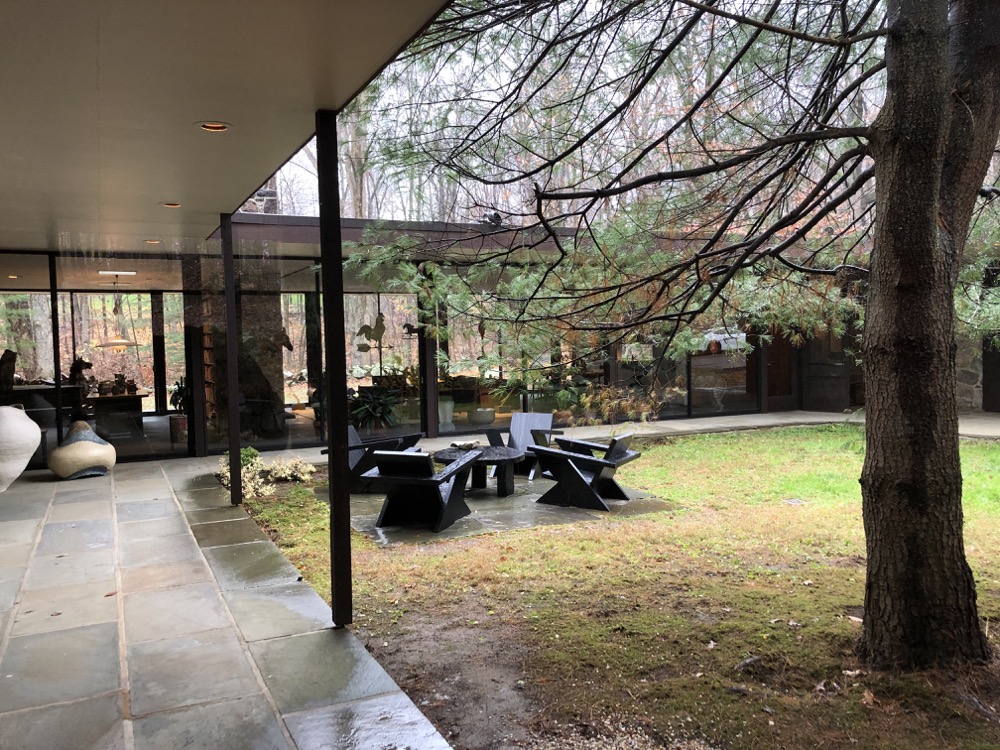 I could tell Hoang was enamored with the place. We were told that a couple of the rooms were off limits (the owner, Eliot Noyes’ son Frederick – I think – was likely chilling out at home while random people like us toured his house. Probably watching us on his Nest or Ring video feed the whole time.) To answer your question: Yes, Hoang would live here in a heartbeat. Or at least an updated version of a house like this.

The Noyes House is split into two. Occupants must cross an open air courtyard to get from the living quarters to the sleeping quarters. So while that courtyard has been graced by installations by wonderful artists over the years, that doesn’t exactly keep your feet warm on a February morning on your way to brew a cup of coffee on the other side of the house. 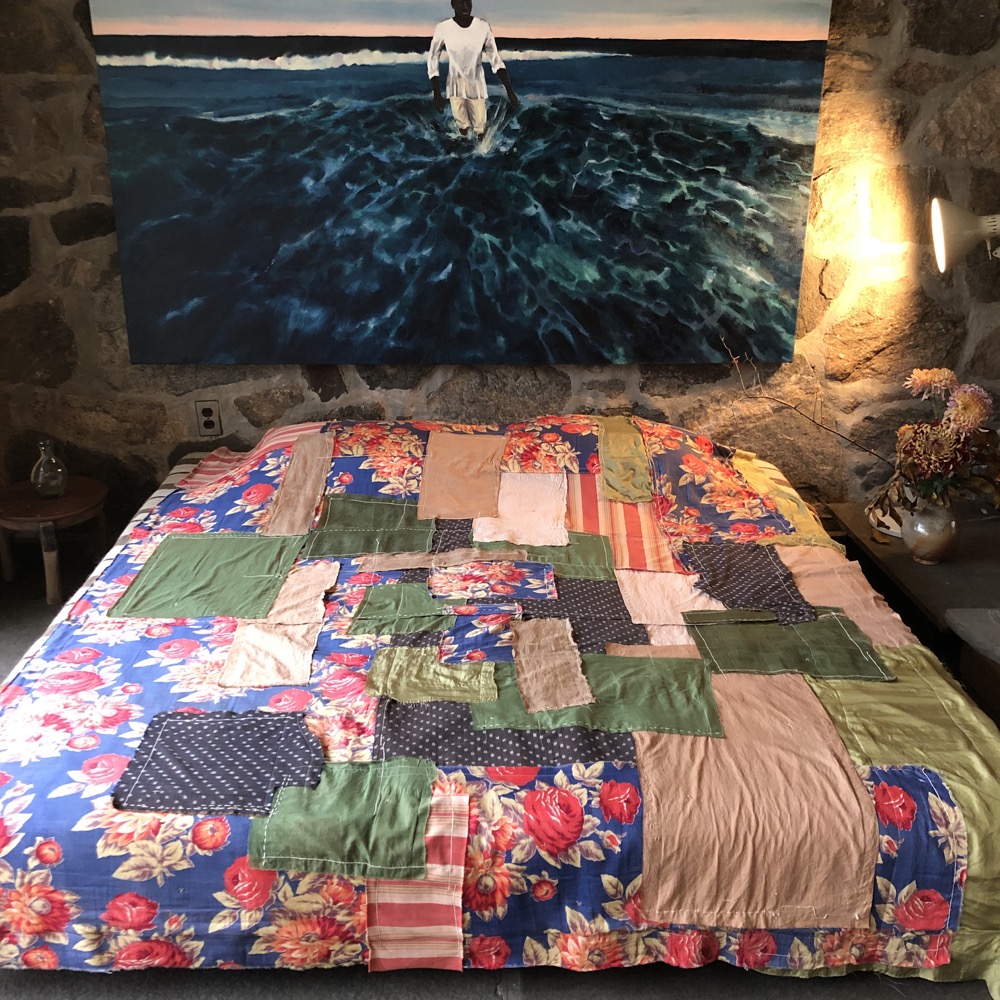 The idea, I believe, is that we are part of nature and we live within it, so why not experience it to a perceptible degree at least a few times per day? In all the 70-plus years that the Noyes family have lived here, no one has built an enclosed walkway… which is not only amazing, but it tells me that the descendants have always known what the house means to the world and have chosen to not alter it in any way.*

*Except for the granddaughter, I think, who got sick of those cold coffee walks every morning. She came up with her own little solution which is certainly memorable and unique: 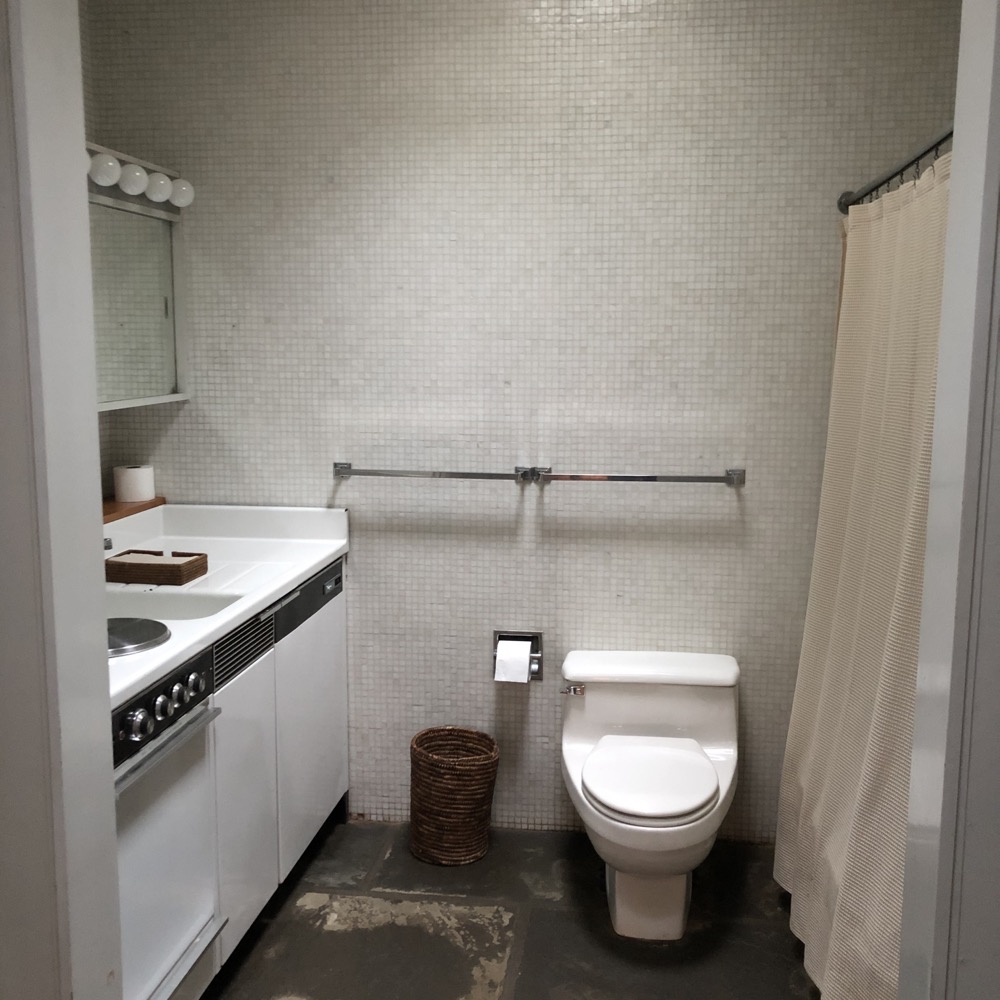 Ah, the joys of MCM living. (Though I must admit, frying up some eggs while sitting on the can does seem pretty efficient to me.) The rooms were actually pretty small, despite the open design. In fact, the livable space here is really very small. But remember that in the 1940’s, giant houses weren’t exactly in vogue.

The works of art that Noyes and his wife collected have largely been moved to museums. This allowed the three art galleries to put their heads (and collections) together to repopulate the space for this special tour event. I’m not going to list all the artists and their works here, especially since they were all removed a week or so after our visit.

Many visitors came here for the art; the house being a mere exhibition space. We came for the house and wound up enjoying some of the art. I can’t pretend to be a student of the modern architecture movement, but by being married to my wife, I’ve come to learn quite a bit about it. I’ve developed a fondness for Eliot Noyes in particular, and have sought out a few of his works around state as a result. 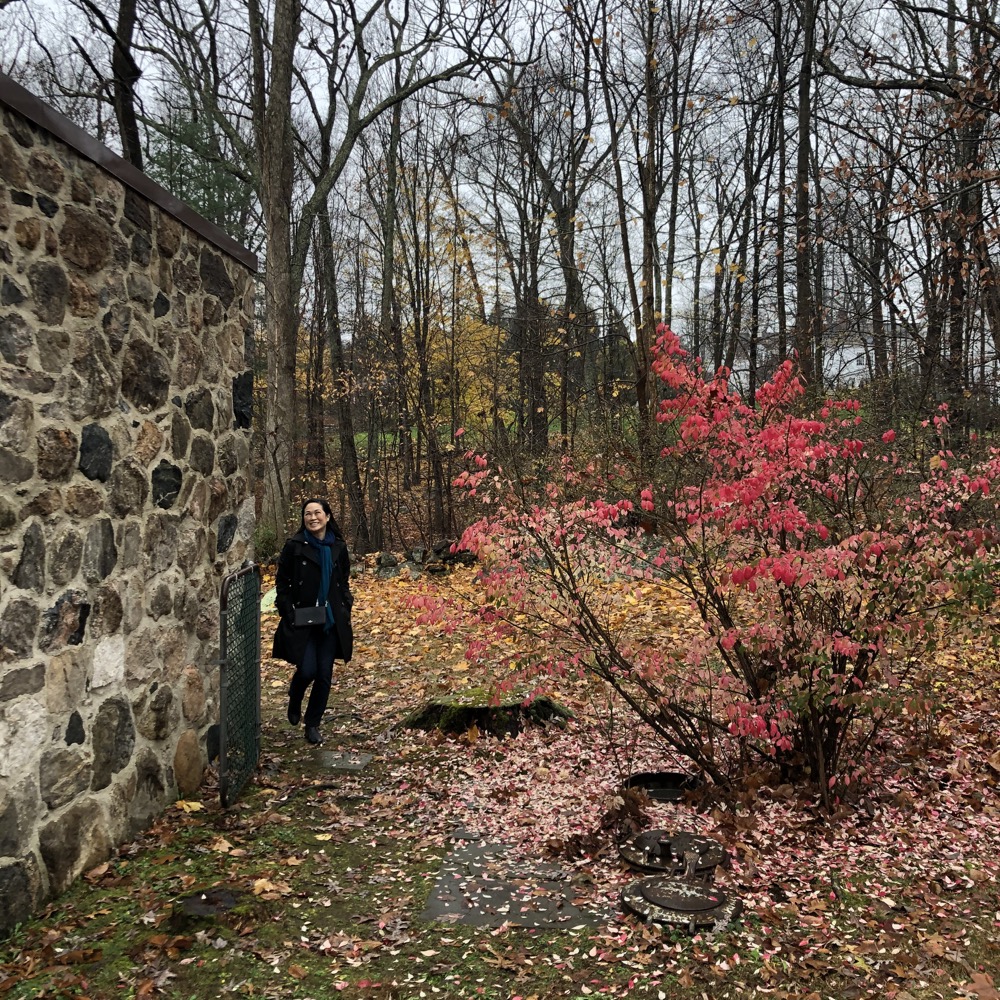 Beyond his architecture, I think his diverse reach and influence should be more widely known. Everyone knows of Johnson and his Glass House three miles away. Everyone knows of Paul Rand and his graphic design work for IBM and CBS. But Noyes, who bridged the two and was friendly with both, has slipped through the cracks a bit. To reitterate:

Noyes was a path-breaking figure in many ways: as a curator in the 1940s, he established the design program at MoMA, shaping it into an outpost for progressive and democratic thinking; as an architect in the 1950s, he played pied piper, turning New Canaan into a Modernist mecca; as a consultant to industry in the 1960s, he popularized the notion of universal design, preaching to his clients the virtue of consistency in all things—architecture, graphics and products.

Noyes also designed an addition to The Oliver Wolcott Library in Litchfield and it’s really cool. 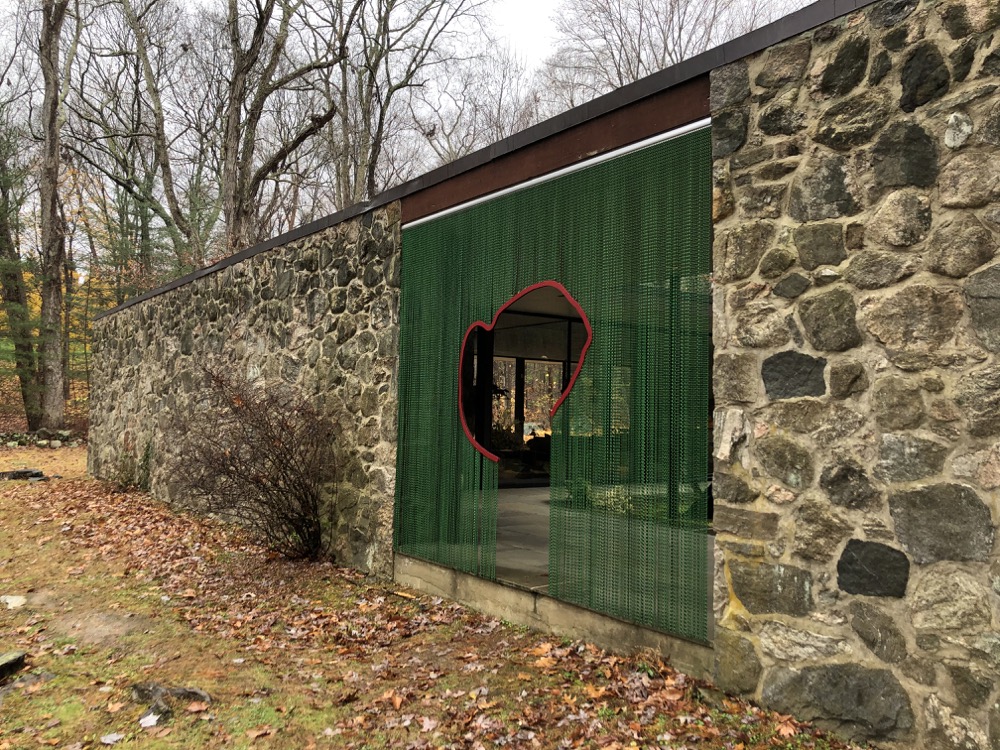 As the pastel Porsche guy began his tour on the other side of the house, Hoang and I wrapped up on our side and took a muddy walk around the perimeter. I asked her if this was worth the 80 minute drive each way in the rain. 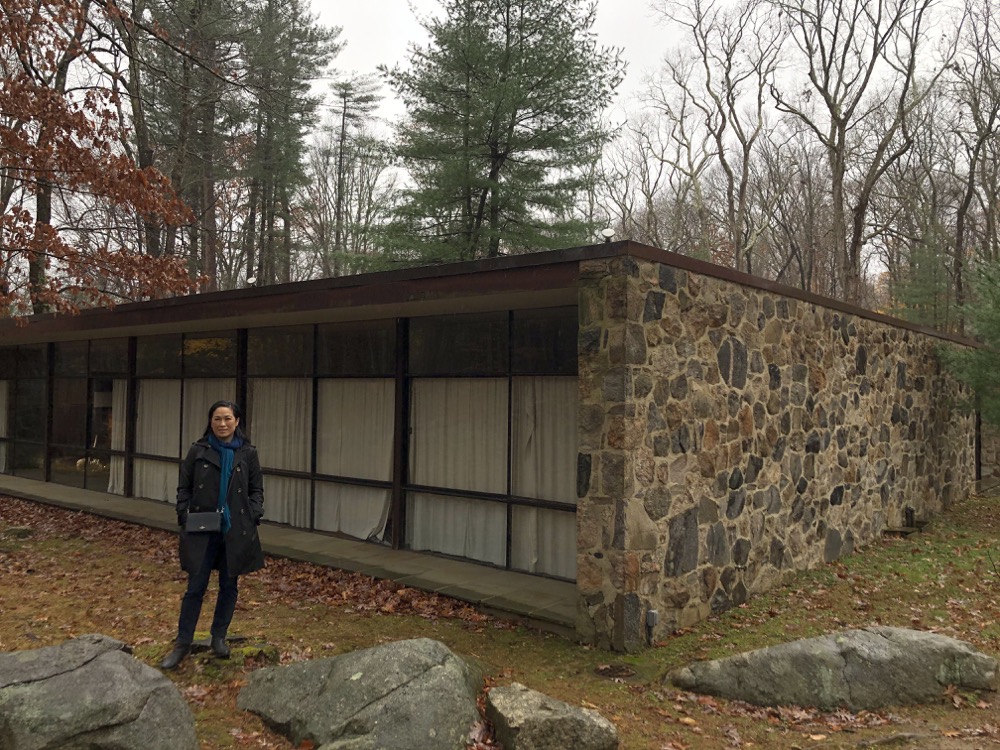