There Oughtta Be a Law: Visit Museums
Hartford (Google Maps Location)
May 12, 2008

First, an aside regarding my awkward title. I have received more then a few emails pointing me to various articles about the impending demise of the Mark Twain House Museum – one of CT’s most popular and important sites. While I’m absolutely confident this will never happen and that these articles are merely political scare tactics, it prompted me to once again remind the reading audience that these places are here for us. They are cheap and friendly and fun. So visit them. Even if there’s no “law.” 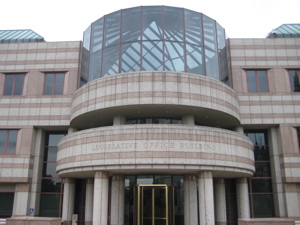 Do not be afraid – not of this write-up nor of taking the tour yourself. Yes, the name is daunting – there’s just no way this could be the least bit interesting, right? Wrong. ALL museums and museum-like things in our state are wonderful repositories of history and exciting art, architecture, and character. Plus, WE the PEOPLE paid for this building and WE the PEOPLE pay the salary of everyone who works here and WE the PEOPLE supposedly tell those very same people what to do on a daily basis. So come on in, relax… Explore… Enjoy the wonders held over at the Connecticut Legislative Office Building! 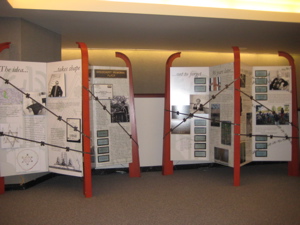 I had no idea that this building existed let alone that it offered self-guided tours. While collecting brochures at the State Capitol building (CTMQ visit here), I picked up one about this building and initially sort of dismissed it. I think we can all agree that we are lucky I didn’t. I’ll take that silent pause as a stunned and emphatic “yes.”

First impressions: Our Legislature is lazy. Oh sure, they only actually work a quarter of the year or so and are notorious for yachting and golfing, but you people just don’t understand. (Ahem.) But check this out – these esteemed men and women have the supreme luxury of riding a 200 yard long treadmill back and forth between the Capitol and their offices. (For the record, my employer’s headquarters require me to park a third of a mile away and walk. My workspace is a full quarter mile away from the cafeteria – no joke. And we all walk. Just disregard the fact that I prefer the bus and always pack a lunch, but my point is valid.) Just look at this thing: 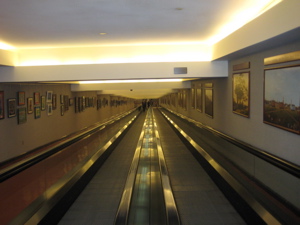 The 36 Senators and 151 Representatives (I’m still trying to get to the bottom of the missing 18 towns with no representation) all have offices here and they meet in one of ten public hearing/committee rooms on the 1st and 2nd floors. And those rooms are actually pretty interesting… 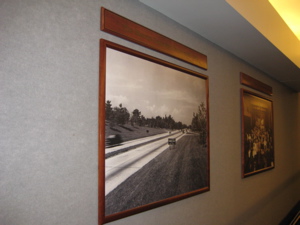 Each door is a cherry wood work of art. Designed by Rick Wrigley (of Holyoke, MA, bleh), each contains a bronze casting of the state seal and a panel depicting a state symbol. These panels are created in marquetry, an ancient craft in which veneers are cut and pieced to form a picture. The various woods used in these pictures are ebony, holly, rosewood, Australian walnut, anigre, and lacewood. And yes, they are really, really cool. 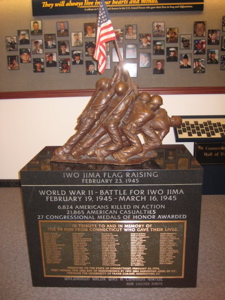 And they are, as if you didn’t already know: The American Robin (state bird), Mountain Laurel (state flower), Praying Mantis (insect) – says the brochure, even though it’s not native to CT, it is a symbolic reminder of the importance of the natural environment to human and biological survival. Okay.

Up on the second floor you can find, among other “marquetries,” the Charter Oak (state tree), a Nutmeg bush, the “Old Statehouse” (CTMQ visit here), and a Sperm Whale (state animal). And I just learned that CT ranked second only to Massachusetts as a whaling state. Hm. 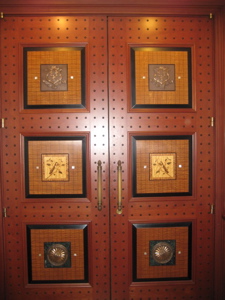 [Since you are wondering: The motto is “Qui Transtulit Sustinet” (He Who Transplanted Still Sustains”), Mineral is Garnet, Shellfish is Eastern Oyster, Fish is Shad, Fossil is Eubrontes Giganteus, Ship is USS Nautilus (SSN-571), Flagship is the Amistad, Aircraft is the Corsair, Tartan is a lame light blue, green and yellow affair that actually all symbolize something – okay, check this out – “large blue stripes for Long Island Sound, medium gray stripes for granite, large green stripes for forests, red and yellow pinstripes for autumn leaves, and white pinstripes that are offset from the center, representing the state’s unpredictable winter snowfall. We’re not done… State hero – Nathan Hale, state herione – Prudence Crandall, song – “Yankee Doodle”, skipping the poets and troubadours, state composer – Charles Ives, Folk dance – the square dance, and cantata – “the Nutmeg.”

Phew. Of course the Shad, the Nautilus, the Corsair, Hale, Crandall, and Ives all have museums dedicated to them as well.) That’s is all.] 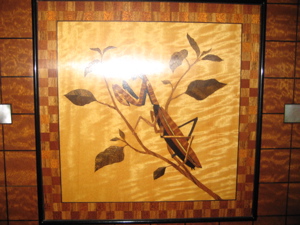 The Charter Oak, quickly, is of course the most famous tree in all of CT lore. We’ll learn infinitely more about it over at the Museum of Connecticut History across the street and from my actual visit to the site. But I’ll touch on the nutmeg bush for a moment; denizens of CT are called Nutmeggers and we think we know the story behind that odd nickname. Yankee peddlars in the 18th and 19th centuries carved and sold wooden nutmegs as real nutmegs in the South. 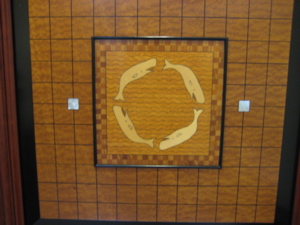 Aha! It turns out that this legend is most likely untrue. It would take more time and be more costly to make the effort of faking it then to sell actual nutmeg. More likely, the dopes who bought it thought it was to be cracked open like a walnut so they thought they were fake. For whatever reason, the state held on to this story, though, even going so far as to make and sell fake wooden nutmegs at the 1875 Centennial celebration in Philadelphia as well as the 1892 World’s Fair. 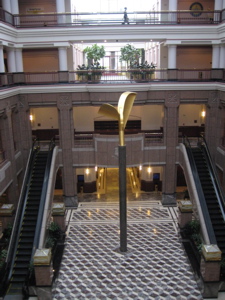 Lastly, there are a couple permanent displays in the Office building, most notably one titled, “An Orderly and Decent Government: The History of the Connecticut General Assembly.” Boooooooooooooooring! Except that it isn’t. Our state has some interesting beginnings – and I encourage you to learn about them. I’ll spare you now, but really encourage you to read what you used to know back in 5th grade. Check it out here in this very well done website.

It does a good job explaining things like our unique town governance – until recently (relatively), towns like Bozrah had equal voice to New Haven. Therein lay some explanation for our continued blue laws and there is also of course a piece on the Charter Oak. (We’ll all be sick of the Charter Oak before we’re done.)

While the building sounds dour and my report didn’t help much, if you happen to go to the Capitol or the state museum or library across the street, this place is worth checking out. If only for the fantastic state Hall of Fame on the 2nd floor! 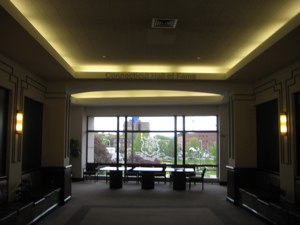