First things first: Yes, Thankful Arnold was the name of a person. A woman, actually, who lived in a house in Haddam in the 1820’s, who happened to produce 12 kids. She was widowed and left in debt, but got herself out of that mess and successfully ran the house for many years. The house is now the home of the Haddam Historical Society and is a museum. Smack-dab in the middle of my day long Connecticut Open House Day outing, this place was a welcoming and pretty cool stop. 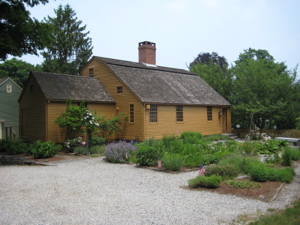 So… the name. I quickly realized there are (were) lots of similarly descriptive names – some of which are still with us today like Grace, Joy and Hope. But there were some crazy names back in the day – there is a list of some at the house including: Submit, Increase, and Freelove. Supply your own joke here. 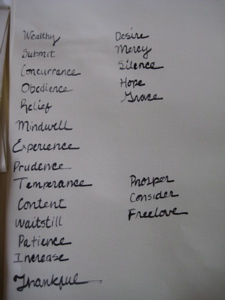 How nice are people in Haddam? I arrived about 30 minutes before opening and still got a tour! It was the “Reader’s Digest” version, according to the really cool guide who let me in, which is fine by me. With many dozens of historic house museums in the state, I rather appreciated the condensed tour.

The “Open” sign was displayed on the road, so I thought nothing of parking and approaching the museum. A very old woman who was gardening greeting me warmly. Then another woman appeared and acted like she knew me. “Aha, CTMQ fans” I thought to myself. Actually, no. They thought I was a new volunteer there to help out on the Open House Day. Oops. 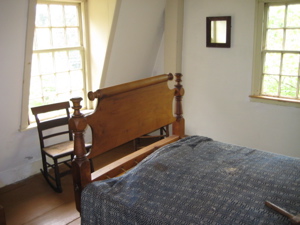 Speaking of the garden, I’ll have you know that in 2000 the Connecticut Herb Study Group conducted extensive research to select plants commonly grown in household gardens in the lower Connecticut River Valley in about 1830. It was also recognized by the National Home Gardening Club and was featured in the summer 2003 issue of “People, Places and Plants” magazine. It’s a lovely garden.

Once we got our stories straight and I was offered the quick tour, we scurried through the basement and up the tiny stairwell to see the house. This was perfect; a distracted docent, an empty house, and a quickie tour. And again, I sure was “Thankful” to be let inside, seeing as though the museum wasn’t even open. And heck, I didn’t even have to pull my “CTMQ” cred.

Again, because I was alone with the tour guide and in a rush, I didn’t really take too many notes. Fortunately, the Haddam Historical Society website gives me more than enough to fill in the holes via their room-by-room tour. I offer you the condensed version, with slight changes made to make sense in this format:

Front Parlor: The front parlor of the Thankful Arnold House is where the Arnolds would have received special guests and formally entertained. Visitors may have been social callers or business associates… There is a portrait of Thankful Arnold at age 67 [Steve notes: She was not hot]; it is a reproduction of the original portrait done in 1843 by Higganum artist Obediah Dickinson and still in the possession of an Arnold Family descendant. The front parlor also displays the most choice pieces of furniture in the house including a Connecticut chest-over-chest… The drawers of the desk only have one drawer pull making it more difficult to open but did save money on purchasing brass pulls… 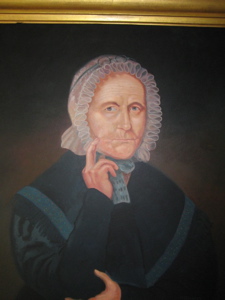 Small Hall between Front Parlor and Back Parlor: In most center chimney Colonial period houses this is where the front staircase would be located, but there is no evidence that a stairway ever existed in this location. It is believed that in the first phase of the house there may have been a ladder to the story above…

Back Parlor: This room is part of the 1800 phase 2 expansion of the house and served as the kitchen from 1800 to 1810. Today it is furnished as the back parlor, where the family and boarders dined and socialized… The portraits on the south wall are Isaac Arnold and his first wife, Mary Ann (Thomas) Arnold. Isaac was the 11th child of Thankful and Joseph Arnold and lived in the house as a child. He may have lived here later in life with his daughter Sabra… 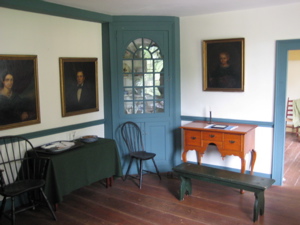 On the west wall is a portrait of a young boy believed to be Isaac Arnold Jr holding a whip and accompanied by a young dog. Isaac Jr, may never have lived in the house but was an important figure in the history of the Arnold Family. [Steve notes: Lots of stuff about Isaac Jr’s life here.] It was Lawrence’s son Isaac Arnold who donated the Thankful Arnold House to the Haddam Historical Society.

First floor bedroom: This portion of the house, originally a freestanding structure dating from around 1750, was moved here around 1810 and attached to the west elevation. It is currently furnished as the bedroom Thankful would have shared with her daughters after her husband’s death… Beds are what we think of today as mattresses. Beds were commonly stuffed with straw or feathers and rested on top of the rope supports. Goose and eider feathers were the most expensive stuffing. Chicken and wild bird feathers were generally the least expensive… A chamber pot, an essential accessory, is located next to the bedstead under the bedside table. Chamber pots were used in the middle of night or by the young, old and sickly when a trip to the outhouse was too difficult. 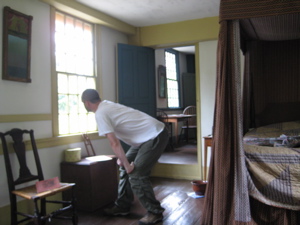 Kitchen: This room, the third and final kitchen, was built circa 1810. It was the primary workroom of the house. Countrywomen in Thankful Arnold’s time prided themselves on being capable and efficient housewives and routinely performed diverse tasks.

…The Arnold Family grew vegetables in the garden and kept a cow from whose milk they made butter and cheese. Baking (pies and bread) was once or twice a week… Variety of meals was not expected, either by the family or the boarders and more complicated meals were produced only occasionally as at Thanksgiving. 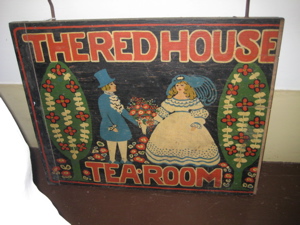 The Thankful Arnold House operated a tea room many years ago.

…Baking was generally done once a week either on Wednesday or Saturday and a Dutch oven was used in between for quick breads, pies and cakes. Typical New England baked pies included egg, minced, chicken, apple, pumpkin and squash. Foot pies were made in conjunction with butchering and were made from the “cleaned” feet of the slaughtered animal. [Steve notes: I had to keep that part in.]

The attic: Climbing the very steep staircase to the upper floor brings the visitor to the open attic space, which is located underneath the lean-to or saltbox roof. A portion of the attic is used for storage and features furniture and items the family is no longer using. A portion of the attic is reserved for drying herbs and the far eastern portion is where the youngest boys of the family have set up their “beds”. Once the family started taking in boarders, the finished rooms were used by the paying guests and the young boys were required to sleep in the unfinished attic. 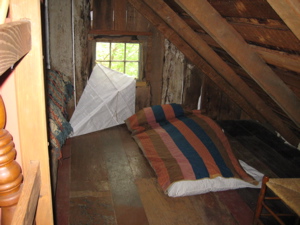 The bedchamber: This small bedchamber is furnished for paying boarders and features a four posted bedstead with rope supports. On the “bed” (hay filled mattress) is the bedwrench made of maple. In normal use the bedstead ropes would stretch and sag and bedwrenches were used to tighten them. Hence the expression “sleep tight”, meaning that the tighter the ropes the more comfortable the night’s sleep… Privacy was not valued in the same way as it is today. People, even strangers, often shared rooms and beds. Some people even found the idea of sleeping alone strange and tried to avoid it.

The basement level: This level of the building is where Joseph Arnold would have had his business including shop and office. The room located in the c. 1750 shed that was moved here would have been his storeroom or warehouse. Note the wide door, shelves and unfinished walls. Today the ground floor is used by the Historical Society for meeting space and office space. 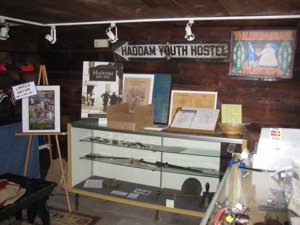 Over at the website are several paragraphs about the slightly mysterious “Arnold House shards” which are very large collection of 18th and 19 century shards of pottery and plates found in the walls. If you are fascinated by that sort of thing, go ahead and read about it over there.

But let’s get back to the basement for a moment… After my tour was done, I was allowed to roam free for a little bit to take my pictures and absorb whatever history I could. I ambled on my own down to the basement and was just about to make my way out to my car when something in the office caught my eye: 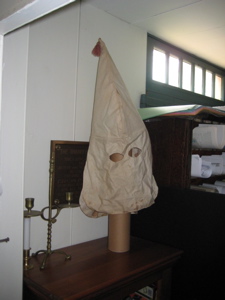 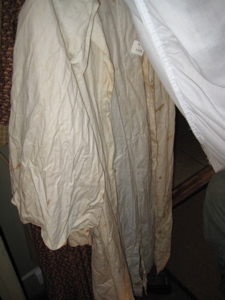 What a coup! I’m sure that the office door is usually closed during open hours and of course they keep it around as a historical artifact – but I don’t care. I snapped my picture and quickly moved away from the open door before one of the volunteers got upset (potentially).

Of course, I probably should have asked about the hood and how it got there, etc. I realized this after I showed my wife the picture and she said, “Wow, that’s weird. Why did they have it there?” Um… yeah. Good question. I guess I’m still learning how to do this, 57 museums into it. 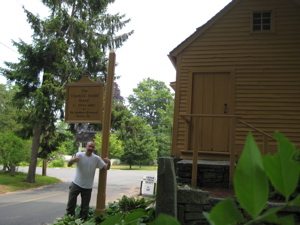