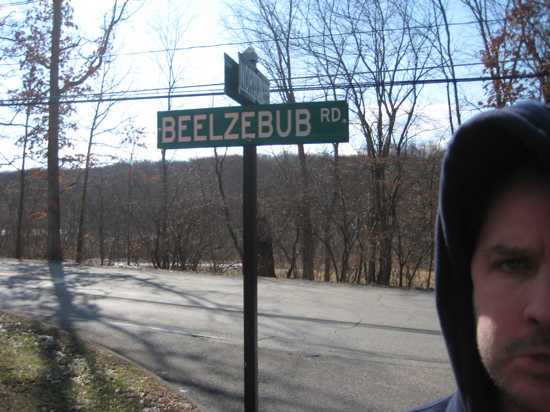 Determining how Beelzebub Road got its unique name hasn’t been easy, as most of the info I can find comes from the nutter websites. But it sounds somewhat plausible, so I guess we’ll tentatively roll with it. But first, what is a Beelzebub?

Wikipedia has a bunch of junk no one will understand about the character, but I’ll sum it up with the following tidbit:

Beelzebub is commonly described as placed high in Hell’s hierarchy; he was of the order of cherubim. According to the renowned 16th century occultist Johannes Wierus, Beelzebub is the chief lieutenant of Lucifer, the Emperor of Hell, and presides over the Order of the Fly. Similarly, the 17th century exorcist Sebastien Michaelis, in his Admirable History (1612), placed Beelzebub among the three most prominent fallen angels, the other two being Lucifer and Leviathan, whereas two 18th century works identified an unholy trinity consisting of Beelzebub, Lucifer, and Astaroth.

No points off for not knowing any of that. Here is the supposed history of the street name, excerpted from the nuts at FEARnet, which has gone out of business:

“Beelzebub Road is located in South Windsor, Connecticut and, to the naked eye, looks like a completely normal little street. In fact, before the street was paved and named, it was referred to as Lovely Street, and became a sort of lover’s lane. How the street got such a demonic name has more to do with the people who lived in the town than the road itself, and it all follows the story of one man in the early 1900s.

Walter Green was, by all accounts, a rather strange fellow, and legend holds 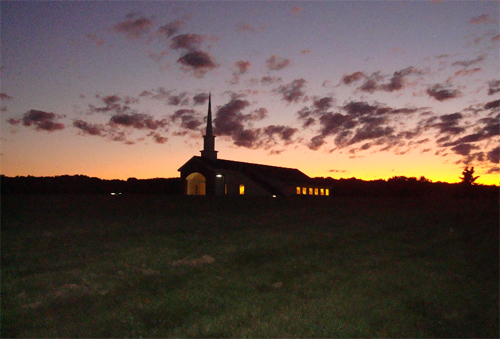 Cool shot of the church from FearNet

[I]t’s because of this man that the road gets its name. Green allegedly was a violent man who would walk down Lovely Street brutally whipping his horse. Some believe he was completely crazy, others believe he suffered from Alzheimer’s disease, while others contend that he was simply eccentric. One thing we know for certain, based on old newspaper articles, is that Walter Green was admitted to, and escaped from, an asylum for the insane.

CTMQ notes: Other sources say this was the Hartford Retreat for the Insane, which now has a museum!

The trouble started when a young woman suddenly disappeared. Reports vary as to the cause and circumstance of her death, but some claim

that she was acquainted with Mr. Green, and say he could have murdered her. Months later, legend holds

that they found her dead in a well. A second disappearance happened shortly thereafter, in which Elmina Bissell, Green’s own mother, disappeared. Her remains were not found for another eight years! After these two disappearances, the townsfolk began believing that Walter Green was responsible for the murders. They called him Old Beelzebub behind his back, and legend holds

that that was how the road got its name.

Today the street is relatively calm, though it should be noted that a local church built on the road was partially burned in a great, accidental fire. And the street is often mysteriously overrun by horseflies. A strange fact, considering that Beelzebub loosely translates to “The Lord of the Flies.” 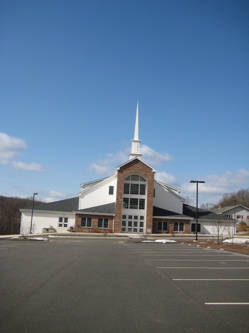 Hm. Okay, lots of “legend holds” and “People say’s.” I have no idea if the road was really called Lovely Street 100 years ago and I have no idea about the supposed murders. But the last bit, about a church on the road burning is true. (As if that means anything.) From the church’s site: “On September 23, 2003 church members awoke to the news that a fire at the church had destroyed the Education wing of the church and badly damaged the Sanctuary. The fire made the church uninhabitable…”

So here’s the funny part. That church is called the Avery Street Christian Reformed Church. Wait… Avery Street? Yeah, even though their real address IS indeed on Beelzebub Road, Church has purposely named itself after the street it abuts rather than associating itself with the Demon King of the Underworld! 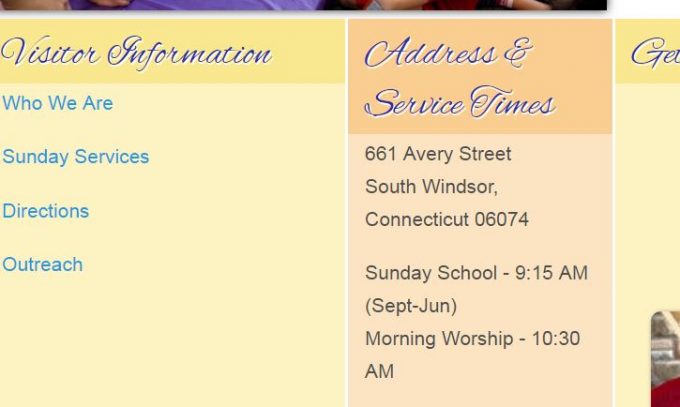 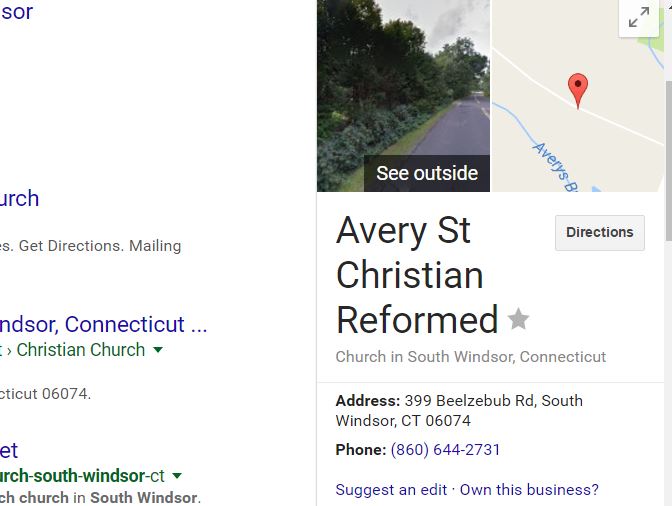 But Google knows its real address.

I drove the entire length of the road and saw nothing out of the ordinary. In fact, the only weird thing that has happened there recently is probably me taking the picture of myself. Some old guy side-eyed me when he passed by.