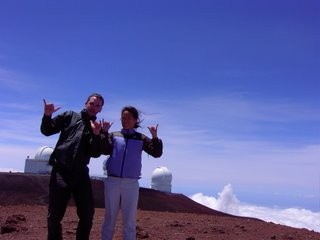 After bagging 5 northeastern highpoints in 2002, it was time for us to get a big one. I needed a good excuse to convince Hoang to go to Hawaii (let alone to a desolate, cold, Martian-like mountain top), so I started planning way back in the summer of 2001 and decided to buy her a diamond ring. In late October of that year, I went through the motions and proposed to her in Montreal. A year and a half of wedding planning and money saving later, my plan finally came to fruition and we went on our two week highpointing trip, under the guise of a so-called “honeymoon.” My plan worked perfectly, as Hoang enjoyed many days on the beaches of Kauai and the Big Island of Hawaii; snorkeling, wining, dining, and relaxing. Sure, I sprinkled in a day up at Waimea Canyons on Kauai, and another couple of days exploring Volcanoes National Park, but Mauna Kea was the icing on the cake. Of course, as all good highpointers know, the night before our summit day, she needed to prepare for the climb… 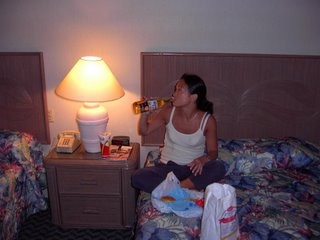 Loading up on carbohydrates the night before the climb

That’s right, a deuce-deuce of Corona and a Filet-o-Fish and then it was lights out. (Let it be known that every single other restaurant in Hilo was closed when we got back into town late after our nighttime lava hike). Our summit day dawned sunny and warm in Hilo (of course, everyday in coastal Hawaii dawns this same way… sigh) and after packing up the rental car, we checked out a few local sights before heading towards the huge, dormant volcano. The first order of business was procuring Hoang some more valuable carbs for the impending hike… 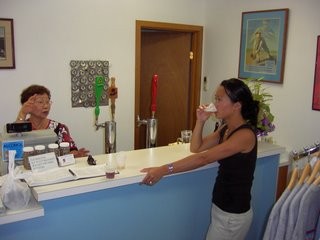 More carbo loading that morning at the Mehana brewery in Hilo

Hoang and that old lady really hit it off and she hooked us up with plenty of sample brew. Truth be told, it’s really good beer, but the brewery itself (in a non-descript warehouse) is pretty lame. But we weren’t done yet. There was one more important landmark in Hilo we had to check out before heading up to the mountain. I enjoy waterfalls, and Hawaii has some of the best in the world, no doubt. At this point in our trip, we had seen enough of them, and besides, the highpoint was looming. But a short side trip through some neighborhoods took us to a rather crappy (by Hawaii standards) falls. Why was it important for me to check this particular falls out? What compelled me to waste precious time looking for a somewhat dumpy waterfall? Perhaps the street sign will assist the reader in understanding. 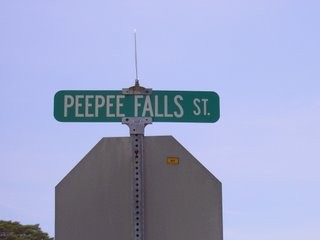 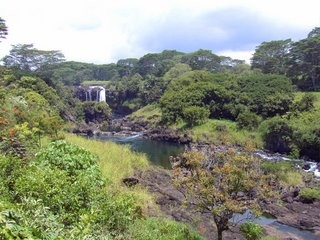 While reading up on Mauna Kea, I was constantly reminded that most rental car contracts specifically state that driving the Saddle Road between Hilo and Kona (transecting the Big Island between the island’s two big volcanoes, Mauna Kea and Mauna Loa) was strictly forbidden. Some resources noted this was due to the poor condition of Saddle road, but further investigation yielded the truth: rental companies didn’t like paying for towing services for fools that don’t gas up before making the trip. It is somewhat isolated and a tow would be quite costly. (The contracts also forbid driving to the southernmost point, which is one of the worst roads I’ve ever driven, but as you’ll read later, I disregarded that provision as well). 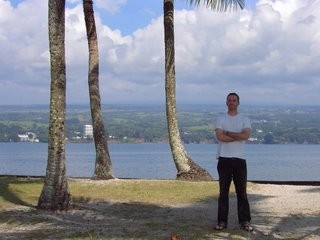 In truth, Saddle Road is perfectly fine. In fact, it’s in far better condition than most roads in Hartford, CT after a winter like this past one we suffered. I encountered no problems whatsoever, other than the typical Hawaii snail-paced driver. This road gained several thousand feet of elevation, but very gradually. From the Hilo side, Saddle Road goes from sea level in downtown Hilo, rises through some jungle fauna, and then crosses into barren volcanic wastelands as far as the eye can see. At some points, the black volcanic rock gave the impression that one was in the biggest, most neglected Wal-Mart parking lot that had crumbled, cracked, and uplifted after a thousand years.

After passing through some clouds, we could see our goal: the summit of the tallest mountain in the world. Upon reading that statement most would probably say, “What!? Ever heard of Mt. Everest?” Yes, I have. But from its base at the sea floor to its summit, Mauna Kea (“White Mountain” in Hawaiian, as it often is covered in snow) rises over 33,000 feet, much more than Everest. It is also the 6th highest summit in the US, for what that’s worth. 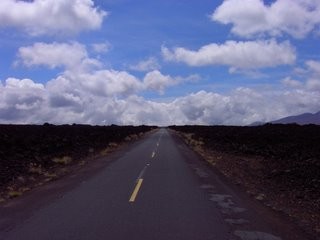 After turning off of the much-maligned Saddle Road, we began the ascent in earnest. Summit Road becomes ridiculous rather quickly, with long lengths of 17% grades, which no car in the world enjoys. Passing by some grazing cattle at 20 mph, we finally reached the Onizuka visitor center at 9,000 feet. All guidebooks suggest a half hour stop here to acclimate to the elevation. The center is named after a Space Shuttle astronaut who was killed in the 1986 Challenger explosion and offers an incredibly boring video about the telescopes at the top of the mountain. Some hippy guy there also offers advice about continuing on to the top, but not much more than, “Officially, you shouldn’t do it.” Which, actually, is probably good advice. There was another family there preparing to make it to the top in their rented minivan, full of luggage. There was no way that they were making it to the top without unloading some weight, which they did. 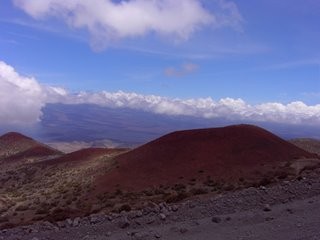 Shortly after the visitor center, and after we changed to warmer clothes, the pavement runs out and the road goes straight up, almost gaining 5,000 feet in 8 miles. But that’s not the tough part… at this altitude, there is only about 60% of the amount of oxygen at sea level, which means the car’s fuel injector is only firing at 60% efficiency. This means a top speed of 10mph, which was fine by me, as this wasn’t the best road in America to see how fast I could take a blind sharp corner with loose gravel above a thousand foot drop off to certain death. 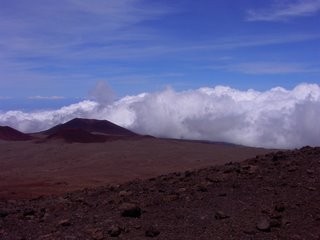 The views became otherworldly up there as we passed from a moonscape to what Mars must be like. Red volcanic rock and no oxygen. This is what a honeymoon should be! After about a half hour or so of bouncing up the mountain, we arrived at the parking lot for the telescopes, of which there are several. There is no life present on top, other than the scientists inside these huge structures, doing whatever it is nerdy astronomers do. (This is the best place in the world for such work – minimal ambient man-made light, and minimal light refracting atmosphere to look through. In fact, on the Big Island at night you’ll notice that all the street lights are a creepy yellow shade, which minimizes any effect on the telescopes, but makes for difficult night driving. (Not that there’s anything to be done on the Big Island after 9PM anyway.) I suppose it’s worth the effort for them to get up here to do their work. 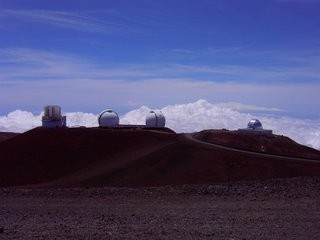 We parked next to the minivan (which made it up) and immediately felt the effects of the altitude. This marked the highest Hoang had ever been in her life, and aside from Pike’s Peak, I as well. Any physical effort resulted in us talking like chain smoker… “Wow… this is… pretty… … cool…” The trail to the actual highpoint is easily seen across the lot, and looks like a quick little jaunt up a small little cone. No. Once the trail begins ascending, you feel like a 90 year old with emphysema. One. Step. At. A. Time. Fortunately, it’s super short and really is only about 10 minutes to summit. 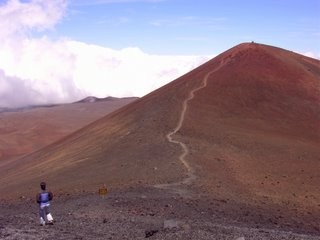 At the summit these days there is a small little wood and rock altar type thing. This is a native Hawaiian traditional altar, but the beer bottle labels ruined the ambience. The temperature was down around 45-50 I’d guess, with the wind whipping in gusts around 60 mph. It’s funny, these last two highpoints, Mt. Washington and Mauna Kea, are the two with the most warnings posted due to weather phenomena. In NH, it can be perfect in the valleys and pure hell on top, which catches many people off guard. Here, it is the same type of situation, since most people don’t think of this environment when they think of Hawaii, and simply don’t come prepared. (Another oddity here is that the sun is so much more damaging, due to the lack of UV filtering atmosphere, coupled with it’s proximity to the equator. Also, if someone who was SCUBA diving that morning summits, the result is a nasty case of the bends, due to the air pressure differences). It was cold. My hands were freezing trying to work the camera, and I thought it was going to blow off the mountain when I set it down to take our summit shot. Fortunately, it didn’t. 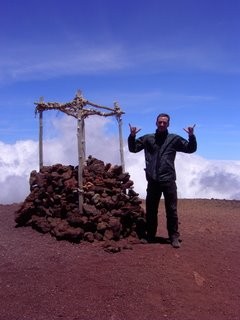 After too many “hang loose” pictures and quick reflection, it was back down the cone and up the other side to our car. Hoang, perhaps excited to get back to the beach, decided that running full bore down one side was a good idea. She had fun until having to go up the other side, at which time her searing lungs and rubbery legs gave her a good idea of what dying must feel like. I, on the other hand, measured each step and had no such travails, mahalo.

The drive down Summit Road was fine, if a bit nerve wracking. For the record, the Kona side of Saddle Road is far, far worse than the Hilo side, because entire chunks of road are obliterated. This is most likely due to the huge military vehicles that traverse it daily on this side of the mountains. The unannounced one lane bridges also suck pretty badly, especially when a giant Humvee is barreling down on you. But we survived, got to our hotel in Kona, and made it to the Kona Brewing Company pub at which time Hoang was able to replenish any carbs lost during her “run” on top of Hawaii. 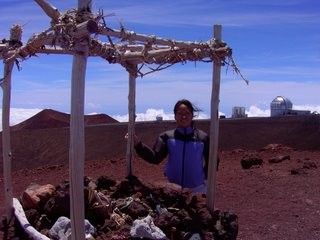 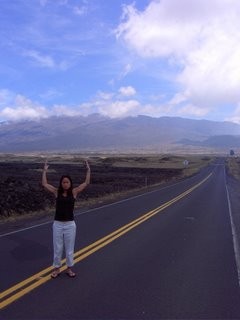