2014 Update: I have received word that this place is closed. Re-reading this page is annoying, because I seem to have mixed up the names of the restaurant chef, the chocolate chef, and the real chocolate chef guy whom I never named. But if they are indeed closed, it really doesn’t matter at this point, now does it?

As you read this page, just try to remember at all times that this is in Greenwich. So yes, this tiny little confectionary and its attendant restaurant and hotel are ridiculous, but not in the context of its location. 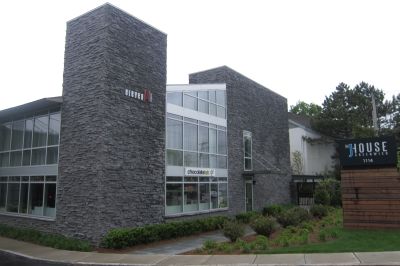 Even though fellow CT Chocolate Trail shop Chocopologie up the road in Norwalk (CTMQ Visit here) has sold/will sell the world’s most expensive chocolate, the vibe at Chocolate Lab is still the most upscale on the trail.

The building, as you can see, is beautiful. It reminds me of the North by Northwest building at Mr. Rushmore in a way. The J House is a hotel and frankly, its room rates are not bad at all – especially for the hedge fund world travelers that come here to stay.

I should note two things:

1. Of the 20 cars in the parking lot, ours was one of only 5 non-Mercedes. I have no idea why it was all Mercedes and not other over-priced cars, but there you have it. 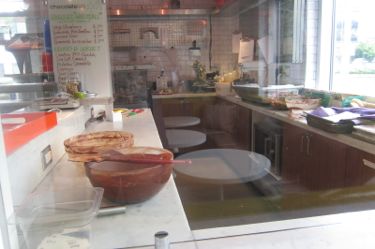 2. Hoang and I were on our way to a night in Manhattan to celebrate our 10th anniversary, so as you can probably imagine our hotel was more expensive than this one; hence my comment about the pricing. More on that at the bottom.

The Lab is new and is still figuring itself out a bit. The young woman behind the counter was oblivious to the world. She was bored out of her mind, had no idea where the Greenwich train station was from our position (it was ridiculously easy), didn’t know the names of the chocolates she was selling, etc.

Hoang and I got a couple fancy espresso drinks which our blithe hostess did an okay job with and then a couple chocolates each. I would be doing a disservice to the Chocolate Lab if I didn’t explain to you a little bit about their coffee and chocolate. 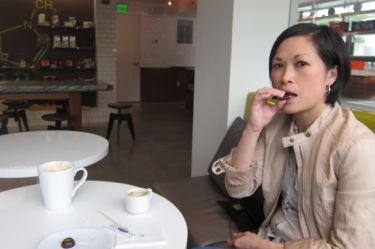 They use an approach to espresso called ‘Ristretto’.

A Ristretto shot is a short, dark, rich, almost thick-like-honey coffee experience. Our freshly pulled Ristretto is essentially all Crema when compared to a ‘traditional’ 2oz espresso.

To achieve this effect, we use the weight of a standard double espresso (approx. 18g) and push through the coffee less than the volume of water for a standard single espresso. We do this in a timeframe of 25-30 seconds from start to finish. The result is 1-1.75 fl oz of coffee that can be described as bolder, fuller, and showing more body with less bitterness. 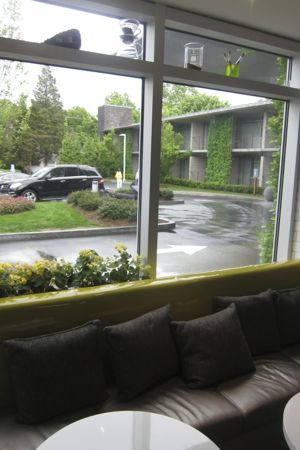 The reason for this coffee epiphany is that the water comes in contact with the coffee for a much shorter time period than other espresso methods. In turn, less of the bitter caffeine is extracted and instead more of the flavorful coffee oils are what dominate this not-to-be-missed fancy.

[2018 Note: I believe that while the Chocolate Lab is long gone, the space remains as a coffee bar.]

And that’s just the beginning! They go on to explain some insane “Siphon Method” of extracting coffee flavor, but you don’t need to read about that. The other bean celebrated here is of course the cocoa bean.

To celebrate the cocoa bean-to-chocolate bar journey by means of creating innovative chocolate items that uplift and bring joy to cocoa farmers, chocolate consumers and the artisans who create these items.

The Chocolate Lab uses single-origin chocolates, many of which are manufactured entirely in cocoa-growing countries-of-origin. For many years, cocoa has been cultivated in one part of the world and chocolate manufactured in another and this disparity has lead to unequal distribution of the value created. Consequently, we haven’t reached the full economic and culinary potential of this magical and mythic bean, according to Chef François Kwaku-Dongo. 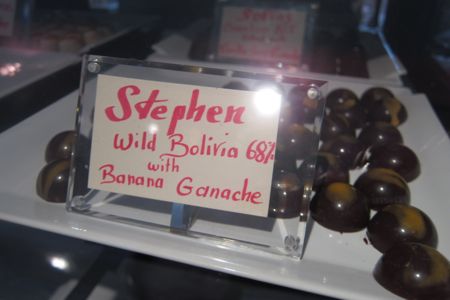 Fact: I will eat anything named after me

By showcasing companies that support fair and transformational business practices (such as companies that make the chocolate in the country-of-origin) we more closely link farmers to consumers, creating new value in traditionally agrarian economies, so farmers can capture price premiums and secure price stability allowing them to invest in lifelong education, grow better products and secure a better life for their family.

Our artisans in the Chocolate Lab transform our “beyond fair trade” chocolate into delicacies for all to enjoy. They love to share the story of the bean-to-pleasure journey as you watch them practice their craft.

Like I said, this place takes this stuff seriously. As serious as the heart-attack you’d suffer if you ate this stuff every day. Chef Francois is the head chef at the J House restaurant (Eleven14). His pedigree includes Spago.

He brought on Chef Didier Berlioz to handle the duties over at the Chocolate Lab. Check this guy out:

Chef Didier was born in France, where he studied classical cooking at the famed Nice Professional Trade School. After graduating as one of the top students he was allowed to complete the Pastry program under Chef Louis Franchin (only 3 students each year are hand-picked by Chef Franchin). Upon completion Chef Berlioz honed his craft at some of the best restaurants of the French Riviera (La reserve de Beaulieu, L’Oasis of la Napoule and The Negresco Hotel of NIce). He was ready to come to America to fulfull his legacy.

And here he is, now in Greenwich. I had the Stephen (I had to, right?) which was perhaps one of the best pieces of chocolate I’ve ever had. I know, banana? I telling you, it was phenomenal. The others we tried were just as delicious. 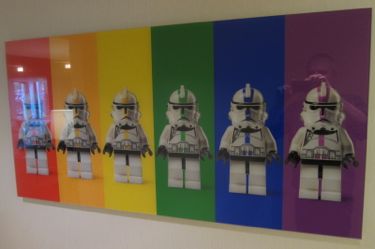 Veterans of the CT Chocolate Trail know that the aforementioned Chocopologie in Norwalk names all their treats after women. This place seemed to go the men route. These chefs in Greenwich are French and Fritz Knipschildt in Norwalk is from Denmark (with some Provencal training along the way.)

I don’t know that that means, but he really should name one of his creations Hoang. In fact, they both can since both men and women share that name in Vietnam. Let this picture of my wife (Hoang) serve as inspiration. 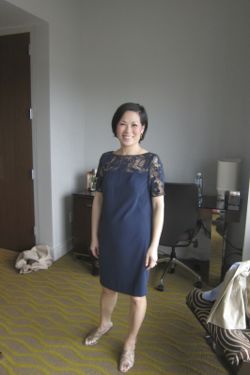 I have nothing more to add other than: “Happy 10th Anniversary to my best friend in the world! May our next 10 years together be filled with high-end French/Danish chocolates and perfect escapes to New York!” (This picture was taken in our hotel room that night, so it’s not that random.) Love you, baby.

The Chocolate Lab is right off of 95 (at one of I-95’s worst sections between Maine and Florida, but whatever) so it’s easy to get to. I’ve read that the restaurant here is incredible as well.