Look, if you’ve been reading this site for a while you not only know the style in which I write, you also know my feelings about certain things. You should also know that almost all of what I write comes from a place of respect and love for the diversity and plain ol’ gumption of a few of Connecticut’s more… interesting places of interest. 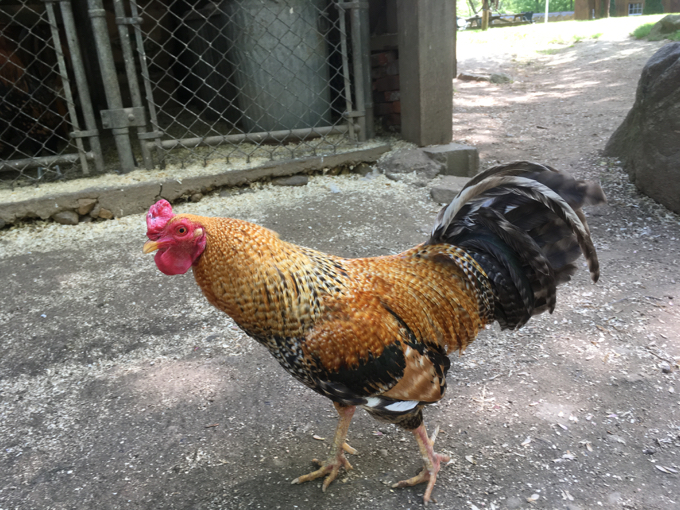 From what I gather, Bakerwoods Farm is sometimes visited by elementary school field trips. That’s cool. All I know is that I’m really, really glad I had my whole family with me when I visited. This would have been one of those incredibly uncomfortable solo visits.

To say the least. 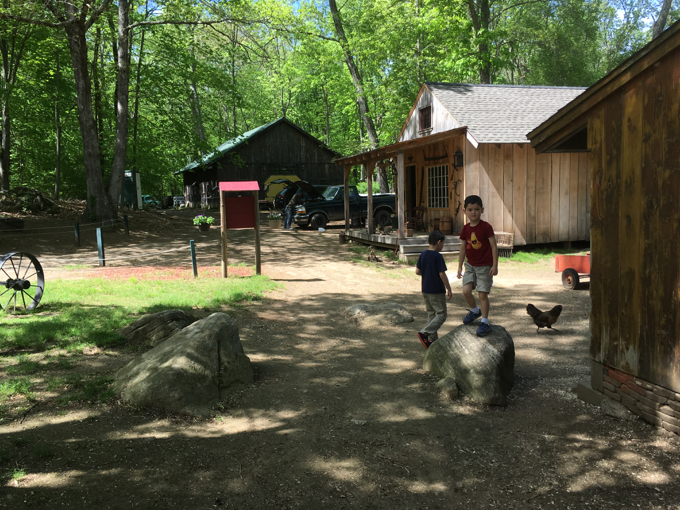 If you know Ashford, you know there are a lot of back roads, dirt roads, and rural escapes. Bakerwoods Farm involves all three. The driveway into the property is a long, sketchy, bumpy, twisting singletrack dirt affair. There is a sign that warns of “redneck speedbumps,” whatever they are. 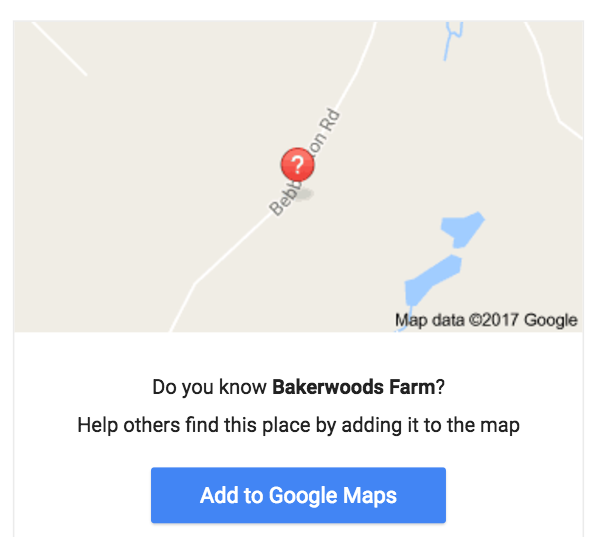 Just as we were about to wonder if we were driving towards our doom, the woods opened up and Bakerwoods Farm was laid out before us. We parked in the “parking area” which seems to double as the mechanics’ garage. A guy, who we later learned was a Bakerwoods “son,” was working on his beat up pickup truck. 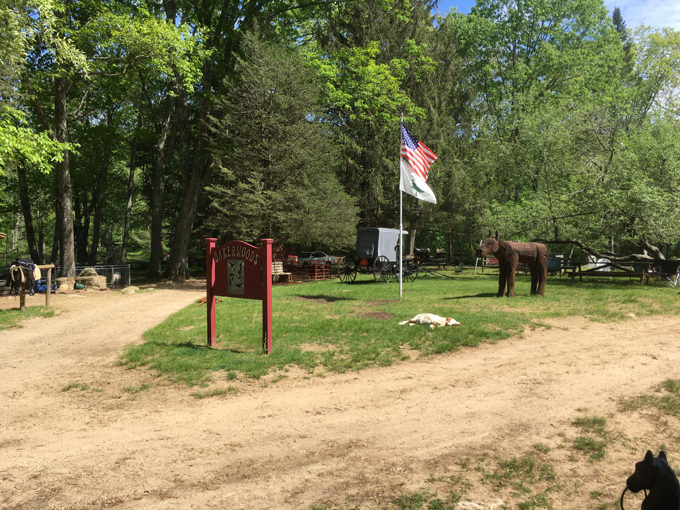 From what I gather, Bakerwoods is a family affair. A good, hardworking, animal-loving, Christian family. Over the course of the half hour we explored the property, we came upon the matriarch, the patriarch, the aformentioned son, and a daughter or two. All were busy with farm life stuff and aside from a “hello,” we didn’t get much else in the way of a tour.

Which is a good thing. I love being left alone. 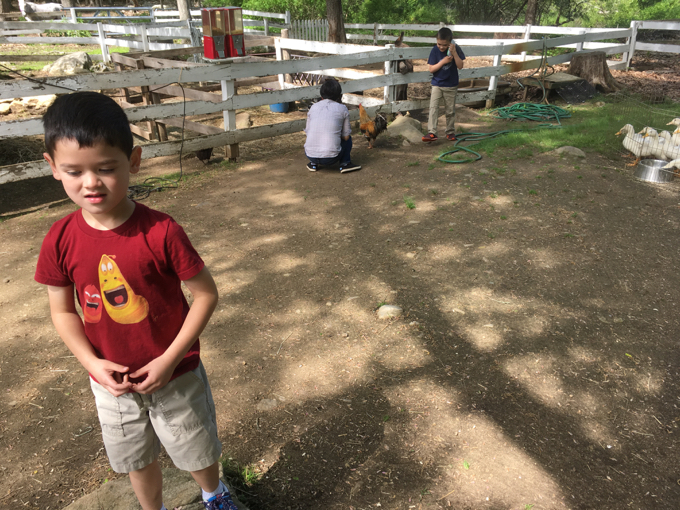 Bakerwoods is a labor of love. There are farm animals (in the woods), a little trail network around a pond, a “trading post,” a concession stand, and… other stuff. 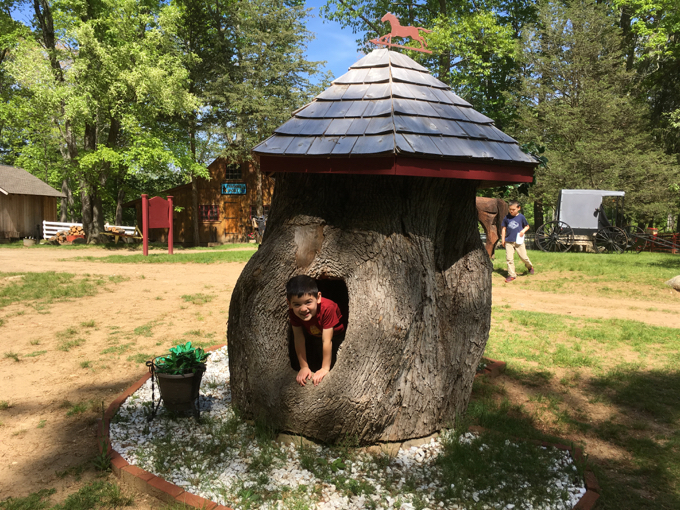 Let’s go to the explanation:

A Tree Treasure While driving down route 89 almost to the center of Ashford, I noticed a large tree that had been cut down. Thinking I have lived in town all my life and never noticed that big tree. On my way home I stopped and checked it out. The two bottom pieces were hollow, the base was broken when cut down. The circumference at five feet was about 18 feet. The second piece was not only a great speciemen of the largest ash tree I had ever seen, somehow I knew the Creator must have had a plan for this old tree. 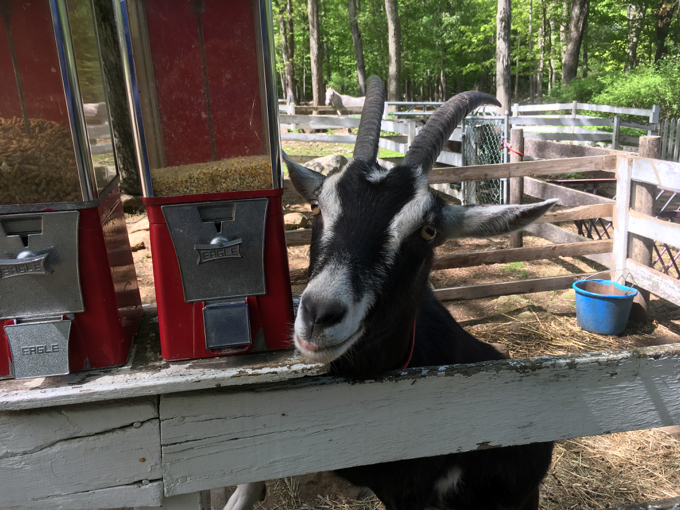 Ash trees have been harvested for fire wood, and a great wood when running low on wood in the winter, as it can be burned green.

Ashford named for its large growth of ash trees.

Today I learned another thing! 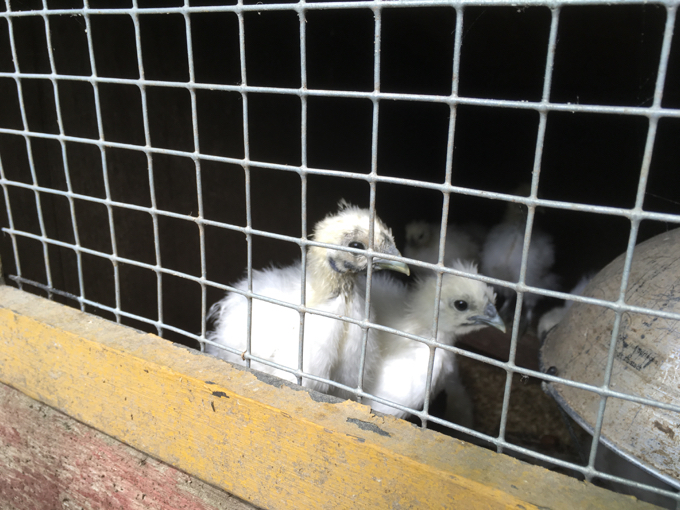 According to the tell tale rings it must have been here for more than 300 years. Still surviving but suffering from the ash boar inside the trunk.

The nefarious ash boar. While I’ve no reason NOT to believe that Ashford is named for its ash trees, this is the only place I’ve seen the claim. I do know that there is no such thing as a porcine ash boar though. 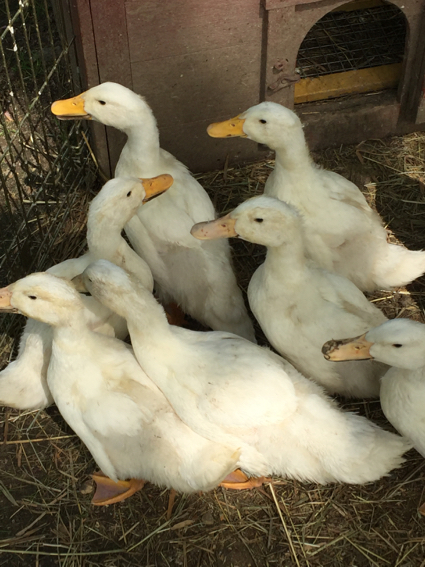 As you can see from the pictures, there are plenty of farm animals here. I would guess that’s their calling card for the kids. We were first greeted by a pack of dogs; barking, yapping, tails wagging. We were assured by the matriarch of Bakerwoods that they were friendly dogs – which turned out to be true. 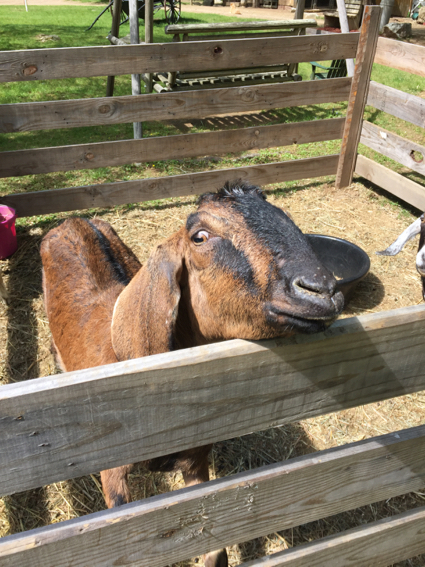 Once past the canine gauntlet, we met the floppy-eared goat, the other goat, the gaggle of baby ducks, and the others. The pens were as clean as they could be and the grounds were quite nice.

I left the family behind and quickly walked the trails around the ponds at the back of the property. They have something called the Ancient Path Trail and something called the Gnome “I Spy” Trail. I’m not entirely certain which parts of which I hiked, as the tchotchkes that make them “fun” for the kids seemed to be in a bit of disarray. 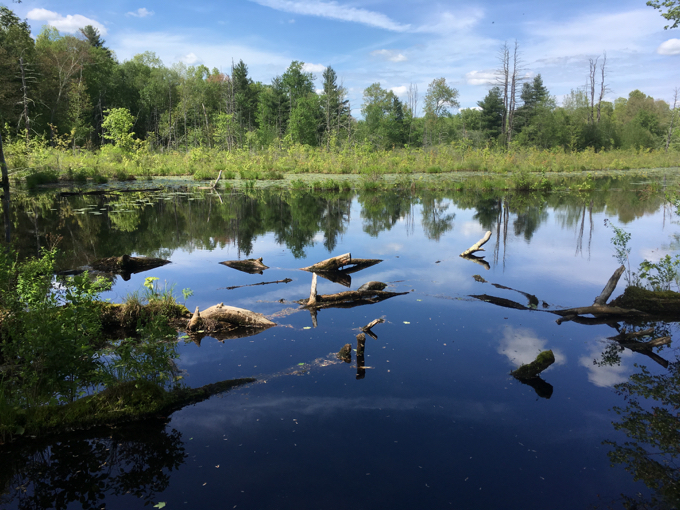 But it was only a couple weeks after they opened, so I’m sure they get improved upon as summer approaches.

The ponds are quite pretty. 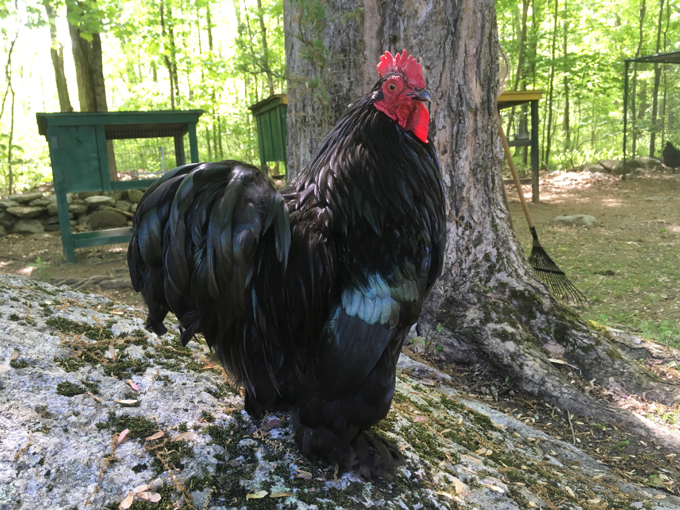 I returned to my wife and children after hearing peels of laughter across the water. Why? The black cochin chickens of course.

At least that’s what I think the breed is. These friendly little buggers look like chicken clowns with their feathered feet and they followed my children around the whole time. They’d run and the furry-footed chickens would run right behind. 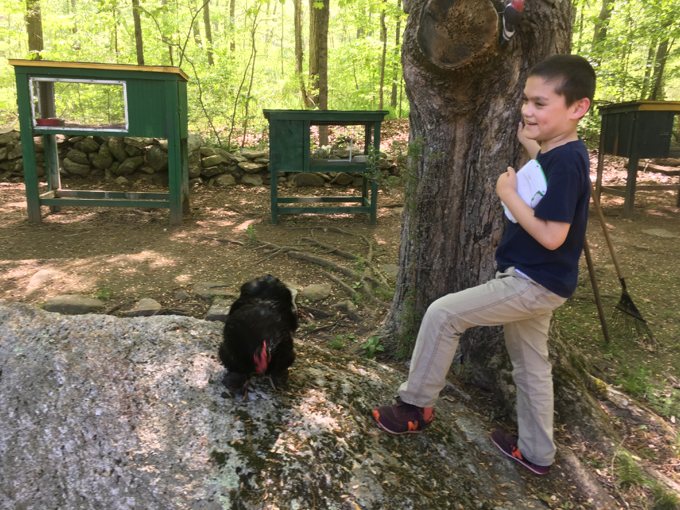 I must admit, it was pretty darn funny.

Bakerwoods is free, but they do provide donation boxes around the property. Of course I gave them some money; while I’m still not sure about the “why” behind Bakerwoods, they’ve made an earnest effort at providing a fun little spot in what surely must be one of the inaccessible parcels of land in Connecticut. 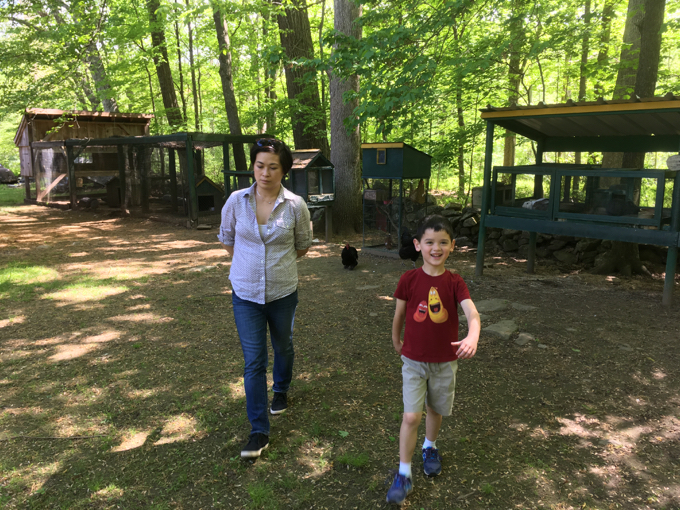 (More for the section of Ashford it’s in than the quarter-mile-plus single land dirt driveway through the woods. Though yeah, that too.) But they also make a special invite to children like Damian.

I find these supernatural excuses (in the previous link) for why my son is missing part of the short arm of his 17th chromosome at the 17.11.2 locus, resulting in no RAI1 gene and all that comes with that, to be pithy, insulting, juvenile, and ignorant. But also laughable. If we didn’t laugh, we’d go craz(ier). 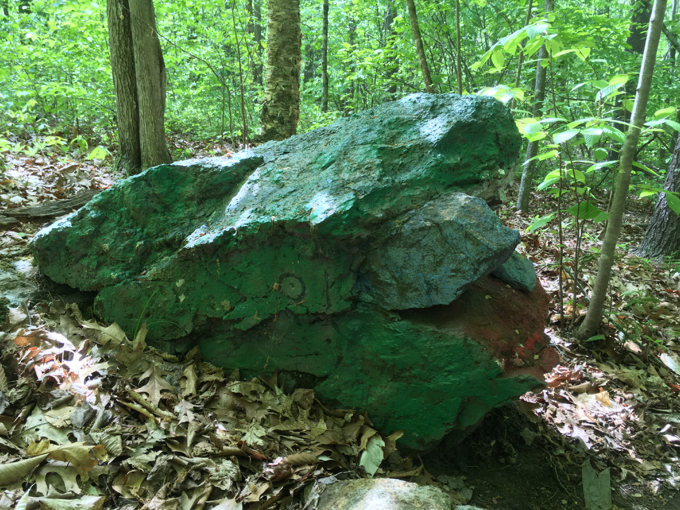 They are a blessing to all of us and that is why God chooses them to be special. There is no “special” deal.. no we are all alike in Gods eyes and equally loved by Him. I hope I have explained this right, you are invited and most of all, you are a blessing to us, I believe what God has told us and you are all “indispensable” You are a Blessing! 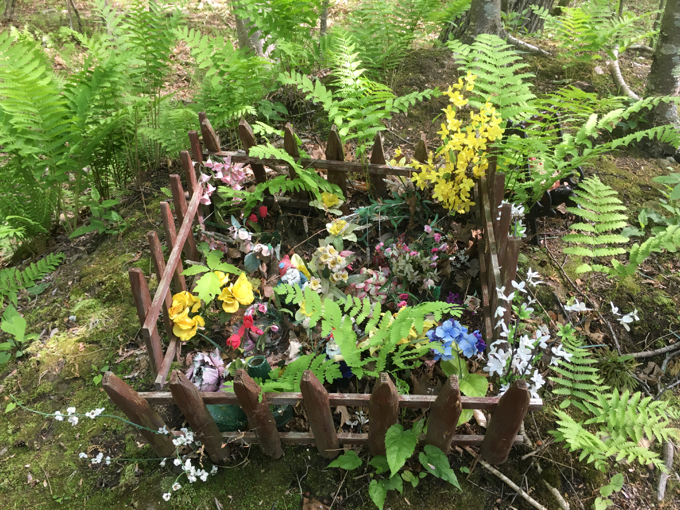 My son punches himself in the face hundreds of times a day. Last week at school he punched a classmate in the nose because he pointed out that he had the same juicebox on the same day he took off all his clothes and tried to stuff them in the toilet for no reason in the world – other than he was being changed after peeing himself. 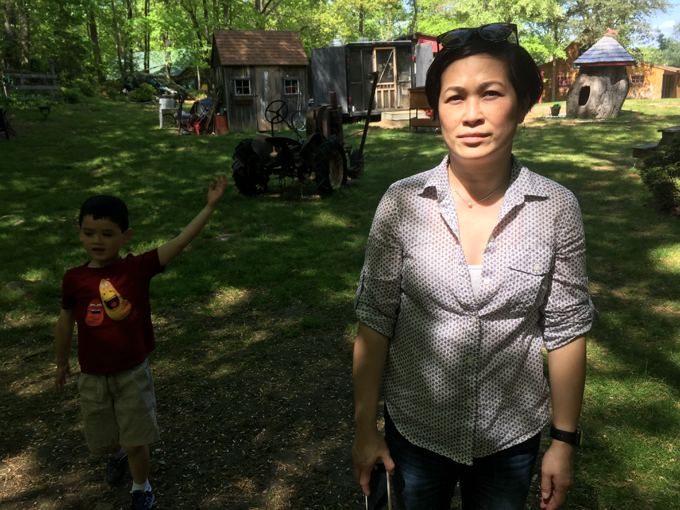 While we poked around the “other” side of the property; the bunny cages, some guinea fowl, a peacock I think… I’m pretty sure a daughter slipped into the food stand. Just in case we wanted a hot dog or something.

As we wrapped up our visit, the patriarch walked near us and I smiled and mentioned how fun the black following feathery footed chickens are. He confirmed their friendliness and went back to doing Bakerwoods Farm stuff somewhere. 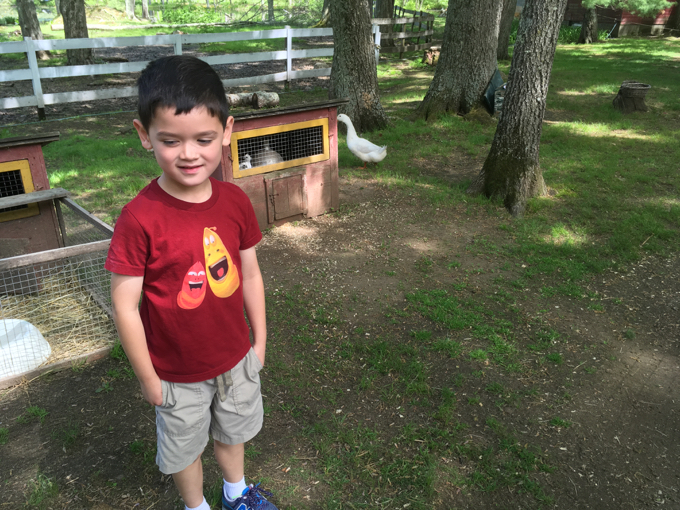 We used the onsite Port-o-Potty and exited the property via the exiting single lane dirt road drive through past several horse pastures and through more woods and out to a dirt road.

I won’t go so far as to say that Bakerwoods provides a Twin Peaks experience; as once you’re there and poking around, it’s no different than a dozen other similar places in Connecticut. On second thought… 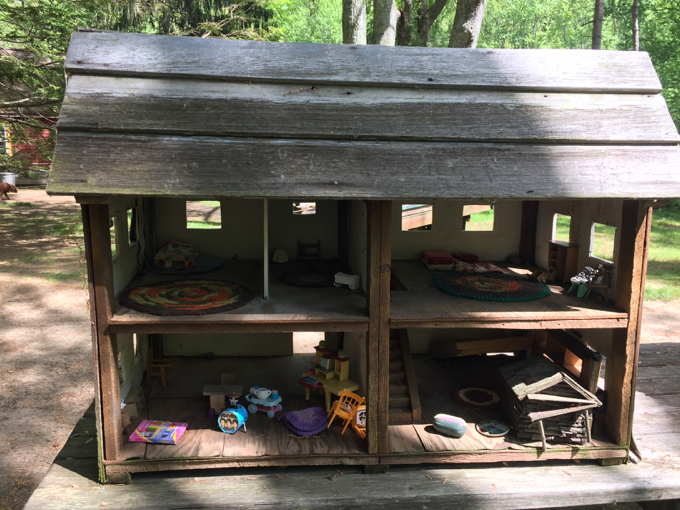 I know this is different and exciting on Monday, January 15,2012 this young Bald Eagle landed at Bakerwoods. What I thought I would tell would be a story about him hunting at Bakerwoods. When I saw him, I had chills go up my spine! Look the American symbol what a Blessing! Then God led me to this: A few weeks ago, a non christian beleiver said to me, as we were discussing the Presidential canidates, The way things are going we should go back to having a king! I did not respond, but I did realize that I do serve a King -Jesus- no wonder why I do not do Presidential Elections well! I thought ahh.. I will add a sign to Bakerwoods to explain this and how we choose to serve Jesus the King here and not the world. This is what he gave me: Election Year 2016 Our Land One nation under God Governed by the Constitution; Written with Prayer We elect a president to govern our nation We Choose to serve the King Not the King of a nation; the King of Kings Lord of All Be prayerful at what we elect to do God reigns above all, even me and you! Give unto Ceasar Live under God Obey the Laws that man has made, Never allowing Christs love to fade. Walk upright and proud remembering condemnation is never allowed. We serve and endorse the King, because to Him we owe everything.

The animals are clearly loved and well cared for and the corniness of the food stand and “trading post” are simply necessities to make a few bucks way out here in this part of the state. 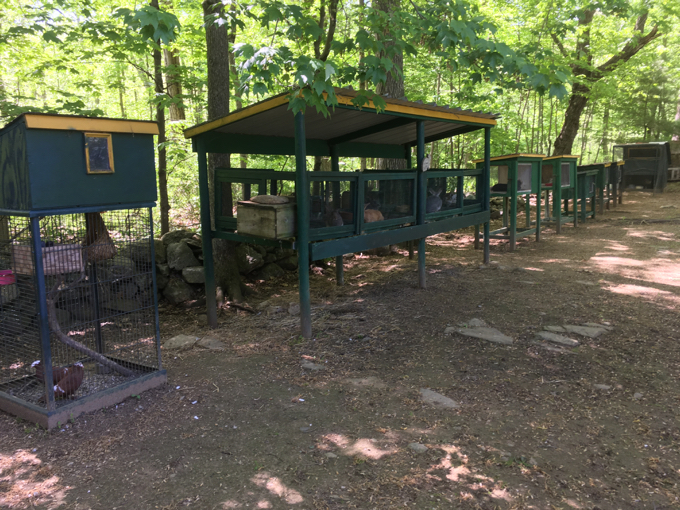 (And making money for Bakerwoods is obviously not the point.) The trail affords some pretty sights and my kids had fun and really, what more do you need?