Note the date above. This was written back when this site was mere months old. So I apologize in advance.

So check this out: Back in the day, some guy named Amos Bradley married some lady named Sylvia Barnes. They had a house built in Southington in 1836, popped out some kids, made some investments, then their kids had some kids, and one of those kids was named creatively named Bradley Barnes. This particular creatively named kid was a rather conscientious child (some would say obsessive -compulsive) who grew up in, added on to, and ultimately donated the very same house to the town to be a museum. That house, formerly known as the Bradley homestead, is now the Barnes Museum. And take it from me – an avowed Victorian-phobe – it’s quite lovely. 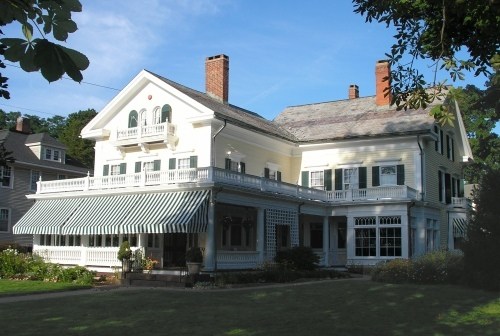 It really is. CTMQ co-nerd EdHill and I agreed to meet up after work on another freakishly warm winter’s night on North Main Street, just south of Southington’s commercial area. From the outside, this is an impressive manse to be sure. We were greeted at the door by a college age kid who asked what type of tour we were looking for. Did we want the hardcore item-by-item hour-long one, the more palatable half-hour version, or would we prefer to simply walk around ourselves. “Hmmm,” I said, “let’s go for the lazy man’s version and see where it takes us.” Well, as a credit to our young guide and to the museum itself, we ended up getting the hardcore tour. Really, would you have expected any less from me? 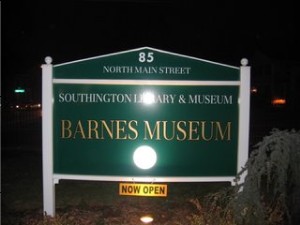 After paying an extra dollar admission and apologizing up front to Tour Guide Dave for all the pictures we’d be taking and the stupid jokes we’d be making, we were on our way. The house was set up with a Christmas theme beginning out in the enclosed porch area. Here we saw the first of about 10 fully decorated Christmas trees. Unlike the stuffy Butler-McCook Museum in Hartford, The Barnes was okay with us taking pictures of their Christmas trees, so here’s to you, Butler-McCook: 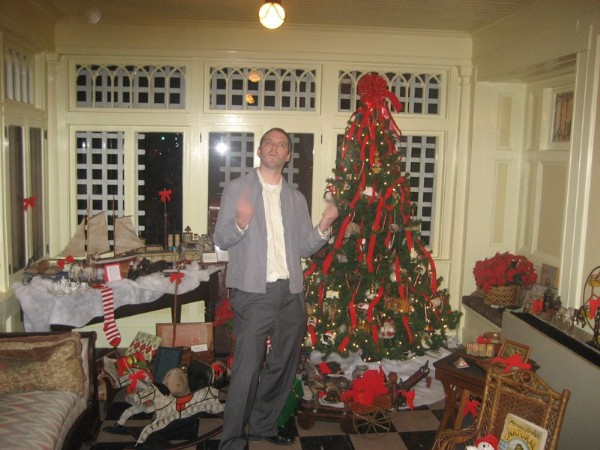 Throughout the entire house, there were little 6×9 cards with retyped diary entries from Bradley Barnes. This guy was a bit on the crazy side I think. He saved all the receipts of pretty much everything in the entire house, and wrote on each the circumstances surrounding the item’s purchase. This is great for us 100 years later, but a bit creepy all the same. I’ve come to realize early in this ridiculous CTMQ adventure that a large portion of museums are the end result of one person’s OCD. Whereas MY mentality tells me to donate and discard EVERYTHING I possibly can, Barnes’ told him to save and catalog everything he ever owned. EdHill’s tells him whenever “Battlestar Gallactica” is on tv. 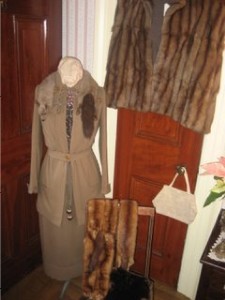 As I said, three generations of the same family lived in the house which was donated to the town in 1973. Bradley Barnes was responsible for making the place museum worthy by adding on a rather large addition and bringing in the plumbing and electricity. I never really got the full story as to how the family came to be rich, but there was something about some investments and factory ownership I think.

We checked out the main living room and then it was up the stairs to the second floor. Actually, before we made the trip Ed found a true treasure – an antique television. Not just any antique television, but one that only played his favorite shows! 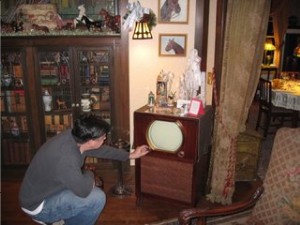 Leaving the TV to head upstairs, we immediately noticed something; this house is incredibly well built. The floors don’t creak, the walls are flush, the thresholds are level, and the whole joint smells nice. Although CTMQ is in its infancy, I refuse to believe that this will be the norm with all the old houses we have yet to see. 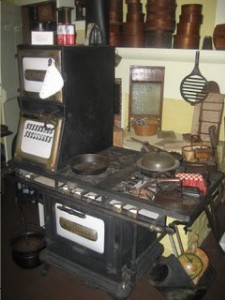 On the second floor, it became clear that this house museum was impeccable. Everything has been so well preserved and documented. Our guide brought us into the bedroom where he showed us a “Lockside dresser.” Instead of each drawer requiring lock and key, there is a sort of bar down the side that takes care of its security in one fell swoop. “Pretty cool,” Ed and I thought, “Why did that idea wane?”

After the bedroom, which contained the first of many Leela Barnes original paintings hung throughout the house, we checked out the bathroom. To be honest, it was just a bathroom. From there we went over to see… hey, where’s Ed? 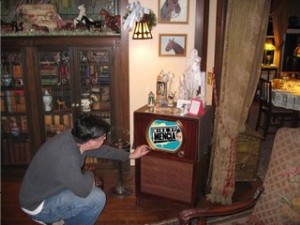 Oh that Carlos Mencia… Next was another dressing room of some sort, which contained various family artifacts. Stuff like Peanut’s tiny shoes. Peanut? Yeah, that’s what they called Bradley’s diminutive mom. There was an old radio and some pictures and a blanket someone had made out of someone else’s wedding dress. Again, everything was well kept and despite my lack of details here, Tour Guide Dave was very knowledgeable. And he was getting increasingly intrigued by these two guys in their 30’s making jokes, having fun, and taking way too many pictures. 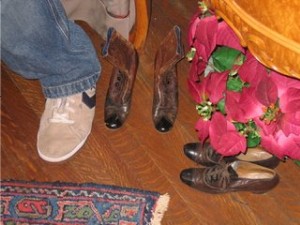 At the back of the house was the office which was again another little mini-museum of sorts. Here we saw the best evidence yet of Bradley’s unchecked OCD: A bookcase stacked top to bottom with detailed records of every receipt he or his wife ever received. Every penny spent was documented here and kept for posterity. I love it when I learn about people more obsessive than I. Speaking of obsessive people, Ed had disappeared again… 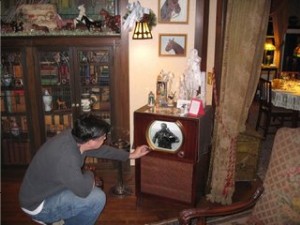 Mission Accomplished! And thank goodness too, because like the President, we learned that Bradley Barnes never joined the military but fancied himself a tough-guy. He collected Civil War memorabilia and proudly displayed it as if he killed a few Rebs in his day. Hmmmm, rich daddy, born in Connecticut, went to Yale on legacy… very interesting.

Once Ed rejoined us, we went back downstairs into the formal living room. There, another beautiful mantlepiece dominated the room – the house has 5 fireplaces afterall. Aside from yet another Christmas tree, this room had a bunch of ribbons strung up on the hanging chandelier. Turns out, in Victorian days this was a Christmas morning custom. The parents would string a ribbon for each child throughout the house – up, over, under, and through everything, leading the child to the most special present. Pretty neat. 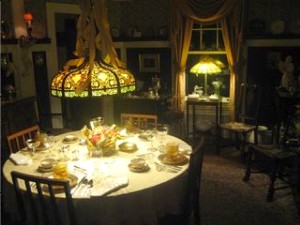 Over in the small library off of the living room there was a bunch of “Oriental” art. I guess this was a big thing back in the Victorian day, as I’m learning. As Ed isn’t really into Asian pieces as much as I am, he was back out in the living room belly-laughing at his favorite sitcom now: 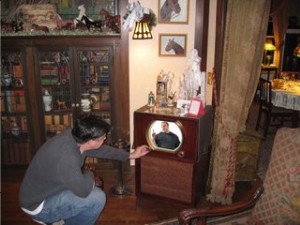 I did note a little sign by the television (a 1949 Motorola, the first in town); it turns out that Alabama was the first state in the country to make Christmas an official holiday. At that, I turned to Ed and said, “Wow, Alabama was at the forefront of something?” And our guide finally broke down and had a good laugh. Good for that young man! Old Victorian house museums are HI-larious! 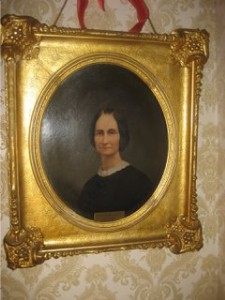 And they also invite good-natured argument. The living room had exposed dark green waxed cypress beams across the ceiling and featured warm, dark tones, recessed seating in the bay window pod, and a fieldstone fireplace. The light fixtures were a bit deco as well – it actually reminded me of some of Frank Lloyd Wright’s stuff which Ed being a huge fan of Victorian architecture, hated. We actually argue modern versus classic all the time. So… Which of you readers want to join us next? 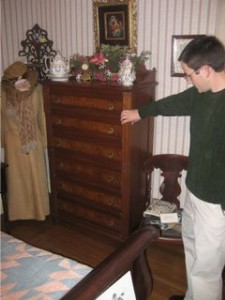 On into the dining room we ventured. It’s a dining room. Ok, what about the goblet room? Yes. Goblet room. Leela Barnes enjoyed collecting glass goblets of all colors and here was a very large collection of them. As the room was all glass and at the front of the house, exposed to the very busy Queen Street, I wondered aloud if the Sun ever hit them at such an angle that it produced a focused death ray into the eyes of an oncoming driver. Alas, it has not. Not yet anyways. Mwuh-huh-huh-huhhhh. 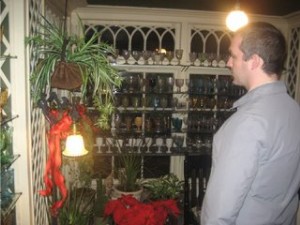 The last unseen part of the house was the kitchen. The whole thing was straight-up 1940’s style replete with a working 1949 GE refrigerator. Off the kitchen was the original kitchen from the 19th century – unheated and containing a massive wood-fired cast iron stove. In the summer, the 20th century family would use this space as it was cooler than the house. “Wow, Ed, you don’t see this everyday, it’s a bottle of cider from 1887 – Ed?” 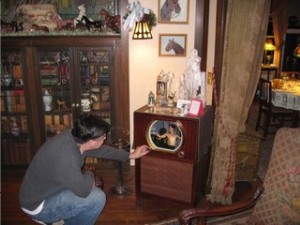 Oh myyyyy, a shirtless Sulu had distracted my partner to the point of no return. No matter, we only had the pantry remaining. And a pantry is, well… it’s a pantry. Actually, there was a display of several old keys and locks. I was immediately reminded of the New Britain Industrial Museum’s extensive lock and key collection. But suffice it to say, once we make it out to The Lock Museum of America, you better believe we’ll make fun of paltry displays like this: 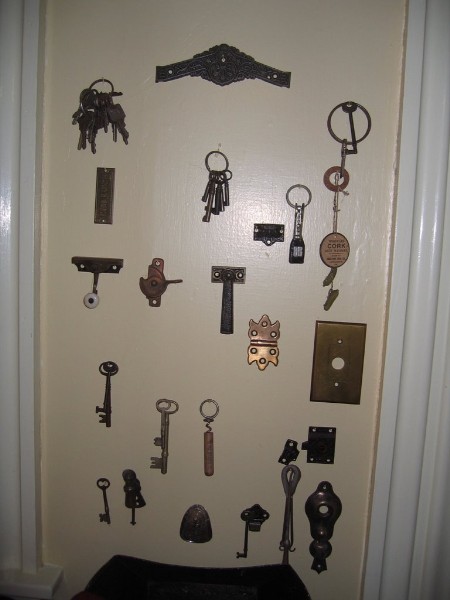 We gave Tour Guide Dave our sincere thanks for his time. He is actually the groundskeeper of the Barnes Museum who developed an affinity for the place. Such an affinity, the kid knew everything about it. Ok, he didn’t know if the tub was cast iron or not when Ed asked, but really… who cares. Ed asks dumb questions. The half-hour “speed tour” I requested turned into 75 minutes of fun. 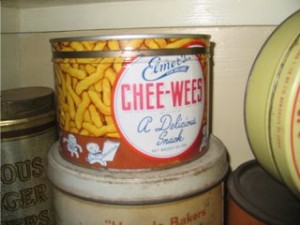 As a reward for being his favorite tour group ever (Dave’s words, not mine), he let us in on a secret. Out back (waaaay out back, must have been fun in winter) was the old family outhouse. What made this unique was that there were 5 different seats! One for each family member. This of course conjures up visions of the whole family enjoying a nice post-meal discussion while sitting together, but I doubt that ever happened. Though that is a funny thought.

Dave expressed interest in CTMQ and seemed genuinely perplexed by our mission. Meanwhile, Ed and I were wondering why a decent college kid was spending his Thursday nights telling the elderly about colored goblets and 100 year old chamber pots. But then I found out that Tour Guide Dave was a lifelong Eagles fan so now we are friends for life. 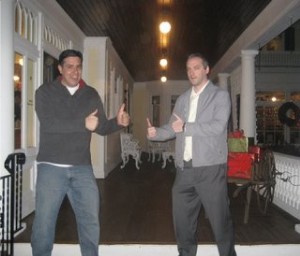 6 museums down, many hundreds to go!