Quercus velutina, Black Oak
Private Property, East Granby
Location: It’s not in a yard or anything, so if you really want to know…
Height: 79 Feet
Circumference: 344 inches 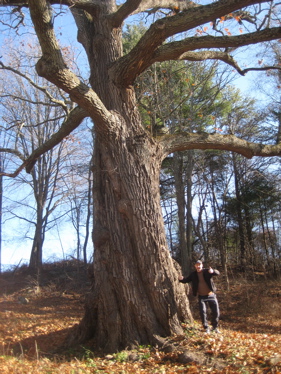 I know there are many kinds of oaks in the world, but I find it rather remarkable that we have two national champion oaks here in li’l ol’ Connecticut. Crazier yet, the national champion bear oak over in Windsor is a mere 10 minute drive away from this one! I’m curious if there are two other national champs so closely situation anywhere in these United States.

Any dendro-geo-nerds out there want to sort this all out for me? Because I don’t really have the time nor inclination as I’ve got to try to capture in words the majesty of standing next to the largest black oak in the entire country.

Want to know something stupid? Black oaks are just as commonly refered to as yellow oaks. Go figure.

Officially, this bad boy is on private property in East Granby. Armed with the address and slightly confusing directions, I went off in search of it once before during lunch. I passed this tree a couple times and absolutely knew that this indeed was the oak in question, but again, the directions were so vague I couldn’t be positive. Fortunately, in the interim, the wonderful gentlemen from Connecticut College who check up on our champions and champion the champions recently snapped a picture of this tree and confirmed my suspicions.

I was right, but now I had a sunny Sunday afternoon and a wife urging me to come up with a way to occupy Damian for a couple hours before we all went mad. Hm, okay… I took Damian to see the largest serviceberry tree in the country the day before, I can’t really imagine that the child would want to do anything other than see another majestic tree today! (Don’t fret – we made a few other stops and side trips besides the tree. Including Hoang’s first tour of The Southwick Jog which is right up the road from this grand tree.)

You may also be interested to know that the tree that I (and others) have deemed “the Coolest Tree” in Connecticut is also in nearby Granby. 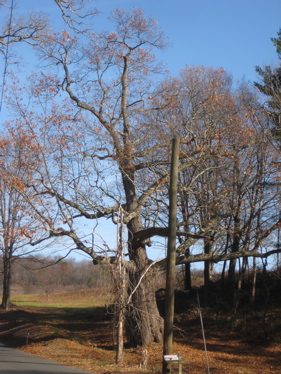 After a pleasant drive north from our home, we crept slowly along the road which passes within 15 feet of the mighty oak. It’s a somewhat oddly shaped tree, with a mammoth bulbous trunk which does not maintain its girth very far up its 79 feet. In fact, after passing several beautiful giant sycamores (including the Pinchot Sycamore, Connecticut’s largest tree) to get here, it wasn’t as awe-inspiring as I’d hoped.

But as I put the car in park and walked over to the massive survivor, I changed my tune. You can tell that this thing has been pushed, pruned and prodded over the years. I’m not sure this land was ever good farmland, but there are only a few large trees in the vicinity. At some point, during a land-clear maybe 150 years ago, someone had the great idea to save this one. (And really, that’s pretty much how all national champion trees came to be champs.)

I don’t know why and I’m not sure anyone else knows why either. Maybe they thought its burled trunk looked cool or maybe it just happened to conveniently mark a boundary. Whatever… I love it. And I touched it. And touched it again.