This is one of those pages that gets a lot of intentional traffic. By that I mean that no one winds up here by accident. Since you’re reading this, you probably know what I mean; you heard about Cadillac Joe or you passed his crumbling structure on Route 6 earlier today. Something like that. Back when I originally put this page together in 2008, there was nothing online about this place. Now there’s plenty, especially because the property was put up for sale in 2018. I’ve tried to update this page as best as I can and will again when someone finally knocks the place down. 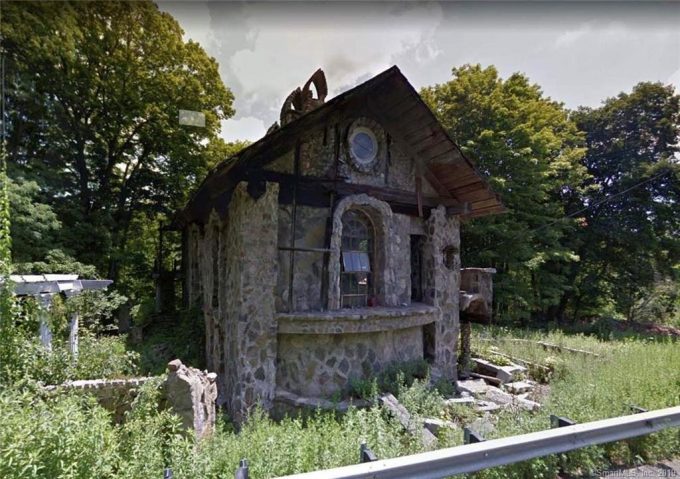 Believe it or not, I’ve gotten not one, but two emails over the last year asking me (ME!?) about this structure. Google searches for “crazy stone house woodbury ct” hit this site and only this site because I listed it a couple years ago as something to see. Alas, I had completely forgotten where I read about it originally, but I did note where it was located. 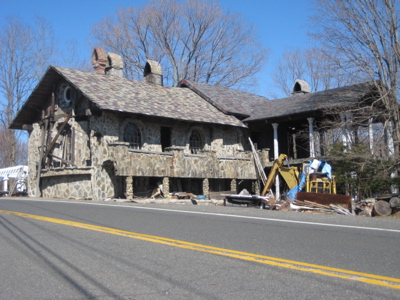 And so, after an incredible lunch at the Carol Peck’s Good News Café in Woodbury, Hoang and I drove up Route 6 in search of the house… thing. With eyes peeled on both sides of the road heading north out of town, we began wondering if we’d missed it.

Um, that’s not gonna happen. A blind man wouldn’t miss this massive stone structure, looming over the road on top of a small hill. So what’s the deal and why am I writing about it? I’m still really not sure, but I did find where I originally read about it – Susan Campbell’s Connecticut Curiosities. And since there seems to be nothing else ever written about this place, I turn to her for an explanation, such as it is:

They call him Cadillac Joe because he’s usually seen driving a Cadillac. He shuns the spotlight and is known to reside in Bridgeport and commute to the strange structure on weekends – an ongoing project that he has worked on for years.

Most people call the structure the “Stone House” because it is built predominantly of stone. It is a weird, imposing edifice with intricately set chimneys in very ornate, artistic shapes. The variety of styles at play make this home on Route 6 between Woodbury and Minortown [which is a section of Woodbury – Steve] a site you can’t miss as you pass by. It looks to be part church, part ski lodge, and part Roman temple. But the details of the house and its history are a little bit of a mystery.

“The owner doesn’t seem to crave publicity,” says a Woodbury town official we’ll keep anonymous. “He has been doing all the work himself, to my knowledge. A lot of the stonework is magnificent too. The house itself is all steel-beam construction and there’s a roaring stream out back, so there may originally have been a mill or factory at the site.”

There is certainly a lot of industrial equipment there these days such as a brace of bulldozers parked as though they are sleeping dinosaurs.

It’s been 8 years since this was written in the first edition of that book and yes, this is still the case – as you can sort of see in my pictures. So to sum up, this is essentially the work of an eccentric guy with some construction skills, money and apparently a lot of time on his hands. If anyone knows anything more, please let me know.

After I posted this, the hits just kept on coming. People love the crazy Woodbury stone house. I had more or less forgotten about this place until a few weeks ago while driving around up in North Granby with Hoang – you know, a typical CTMQ Saturday going to large trees and buying local cheese – when Hoang said, “isn’t that crazy stone house thing around here?” Quickly realizing that not many people have the insane recall for exact geographic memory like I do, I politely said that no, the crazy stone house thing is many miles south and west on Route 6 in the Minortown section of Woodbury. 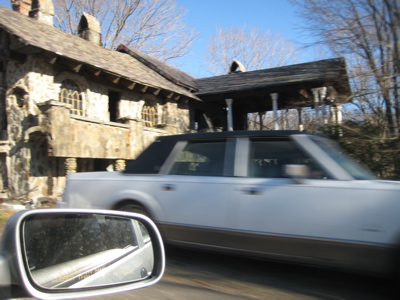 So imagine my excitement a few weeks later when we found ourselves on another typical CTMQ Saturday going to gingerbread villages, abbeys and labyrinths with a drive along Route 6 in Woodbury. “Hey, want to check out that crazy stone house thing you thought was in Granby?”

So yes, we did. And before we knew it, we were in the presence (in a way) of Cadillac Joe himself! The guy responsible for this monstrosity! I took a picture at speed and just got the Cadillac. So I turned around and Hoang snapped another picture at slower speed, but it still stinks, though we can see Joe’s hat in it. So I turned around again, fully intending to get a real picture of the man, the myth, the legend, and… 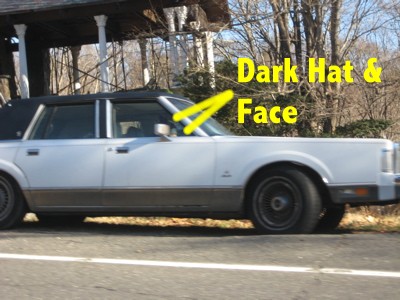 He and his lumbering Cadillac had VANISHED!

Regular reader Debbie supplied This link, in the comments below which sort of shows how elusive Cadillac Joe is. There is also a very worthwhile comment at the bottom of that page from someone who seems to know Mr. Joe personally. I love this stuff.

Anyway, before I knew it, Debbie alerted me to one of the more exciting Google StreetView sets of images I’ve ever seen. Enjoy… First we see the Cadillac I was able to get a couple pictures of: 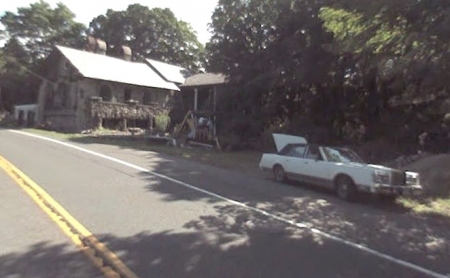 Okay, that’s pretty exciting… even if it is a Lincoln Towncar and not a Cadillac. But then Debbie pointed out the other side of route 6 and could it be!? Possibly just maybe?! The elusive Cadillac Joe, perhaps hunting for more stone for his crazy house spies the Google car… 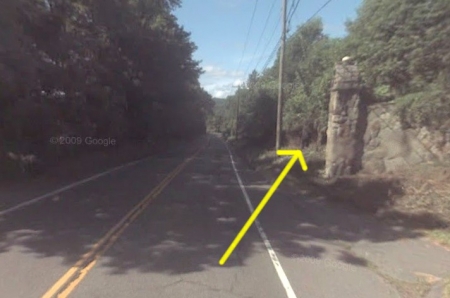 Scurries away as fast as he can… 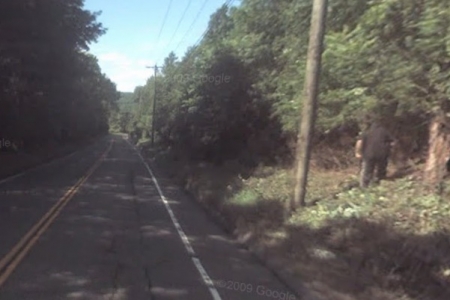 To no avail! StreetView caught ya! 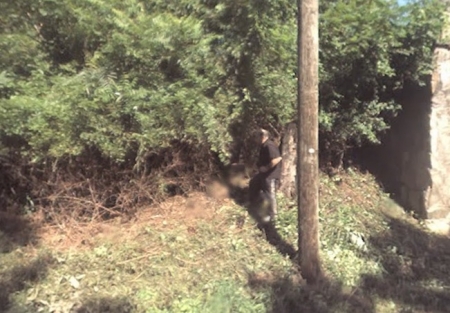 Actually, I don’t think that’s him, as he looked far more slight when I passed him in the car. At any rate, I love that a reader found this and brought it to my attention. I love my website sometimes.

First of all, you should be sure to read the comments below. Lots of people have provided lots more background and interesting information about the house and about Joe himself. Like, for instance, how his name is Joseph Volonino and he’s very most likely now no longer with us.

The house fell into (more) disrepair since this page began and became overgrown. More and more vandals and kids visited it, and Joe’s ability to work on it diminished with age. The property went to Probate Court in 2018 and went up for sale in 2019 for the bargain price of $99,000. Cash. As is. Period.

There’s just no way that anyone can make anything of Joe’s dream, unfortunately. Nothing is built to code, and nothing is safe. Via the comments below, I learned that this property used to be a big ol’ colonial house until Joe started doing his thing. Since it’s literally right on busy Route 6, I just can’t imagine anyone wanted to demolish this place to build another house. I’m sure, through comments of the future, we’ll learn of its fate together.