Another holiday weekend, another beautiful day here in Connecticut. Time to lace up the trail shoes, fill up the water bottles, grab the maps and hit the trail! I utilized (I never say “used”) a friend from Durham for a car spot and I was off. 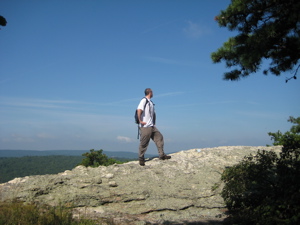 Off to find the dead-end Crooked Hill Road from which to access the eastern bit of the Lone Pine Trail where I left off last time. The problem with this plan is that this particular area of Durham and Madison is rapidly being built up with treeless McMansionLands and Crooked Hill Road does not dead end where the CFPA Walk Book says it does. In fact, it circles around a big hill now. (As of this writing, Google Maps hasn’t caught up with the so-called progress yet either.)

The drive through Durham to drop me off was not without other excitement. Within mere yards of each other, we passed two can’t-miss sites – and a third only a mile or so away. First, Former University of Hartford and then NBA journeyman’s now-foreclosed three-million dollar mansion. I didn’t get a good picture of it (here, right) because the mailman was giving me the stink eye, but it’s a sad sight. Overgrown with weeds and with a broken security system with wires strewn about, the property is a mess. I just find it odd a former multi-millionaire NBA player lived in Durham. 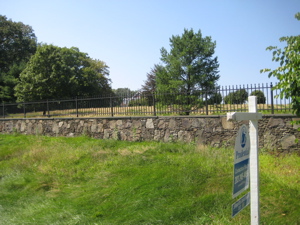 That was the first surprise – I knew he lived in Durham but had no idea where; I happened to recognize the property from news reports – the second was a bit more personal. I can humbly admit that I’ve had a street named after me, apparently.

Even if they forgot the apostrophe: 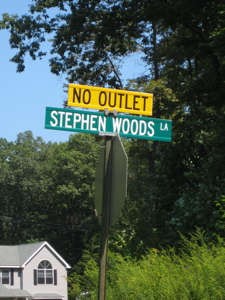 The third CTMQ-worthy site was a bit scarier… Hellgate Road (Duhn-duhn-duhhhhnnnn). Of course, if you can handle it, you can relive my experience here.

After all that unintentional excitement, figuring out the (altered) contours and determining where I should find the arm of the dirt road to the trail added just a bit more. Fortunately, I guessed correctly seeing as though my ride simply left me there to figure it out. I found my old friend the Lone Pine and was again on the Mattabesett within a few minutes, heading north. 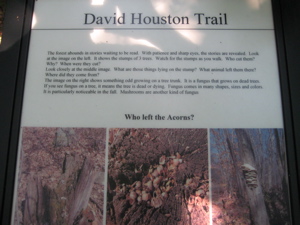 Starting out in Madison’s Rockland Preserve, the Mattabesett shares some mileage with the Preserve’s David Houston Trail. The Rockland Preserve website only mentions that Houston was a “friend, teacher, and naturalist.”

The first 15 minutes or so of my hike was fairly unremarkable, save for the new experience of white granular stone underneath my feet. Then, as happens on every hike, I came upon my first view of the day. And you know what that means! A picture! 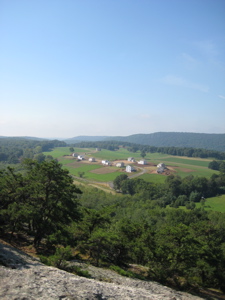 Well I’ll be! With last section’s Totoket Mountain and Bluff Head in the distance, it’s that very same new development that caused such consternation 30 minutes prior while looking for the dirt road to start my hike! The dashing first picture at the top of this page was also from this first lookout as well. 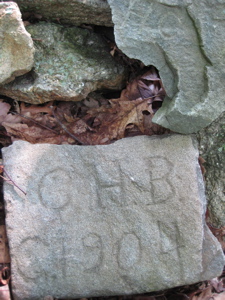 After a quick dip back into the woods away from the cliffs, the trail climbs up to a pile of rocks. But not just any ol’ pile of rocks, no! These are the Selectman’s Stones and they mark the tri-corner of Durham, Madison, and Guilford! And they are really quite old, too, as carving initials into rocks was the only way to keep town boundaries straight one hundred-plus years ago.

You can read more about this cool little bit of history in my piece about the stones. 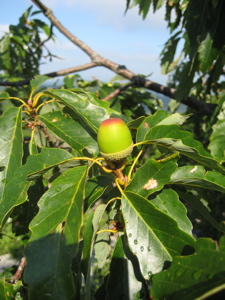 Now back in Durham for the duration of my day, I was eager to get to one of this hike’s highlights: Mica Ledges. The hike through here is, quite simply, a great trail. Through laurel, pine, and chestnut oak; over cushy moss covered rock and across expansive “ledges,” I was again surprised at what hiking in this part of the state could offer. And by the way, the Walk Book has a great piece on the oft-overlooked chestnut oaks (Quercus prinus).

The thing is, if not for the abundance of acorns, you’d never think it was an oak tree.

They grow in abundance on the dry ridges here in Connecticut and have an interesting history; almost wiped out in the 19th century because their bark is rich in tannin. It was used for everything from tanning leather, dyeing fabric, manufacturing ink, clarifying wine and beer, and for medicinal purposes. (The wood also has closed pores which makes them ideal for leak-proof whiskey barrels.) They have a uniquely shaped acorn as well. Huzzah for the chestnut oak! 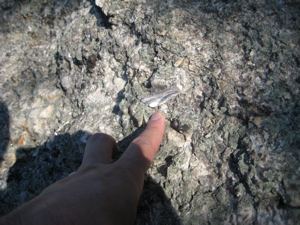 While deeply pondering this particular tree, I stumbled out onto a massive sparkly rock face. Ooohh, shiny things! I was mesmerized. In my last section report, I noted that the geology changes fairly abruptly from one type of predominate rock to another. Here, on the Mica Ledges, it’s rather evident. And cool.

The ledges and lookouts continue for about a half a mile and the sparkles underfoot even longer. I remember as a little kid thinking that finding pieces of mica was akin to finding silver or gold. Even as an adult, I’ve got to admit, mica is pretty cool. I’ll spare you the mica dissertation (for that, go here – it’s actually really interesting) and just let you know the following:

The mica group of sheet silicate (phyllosilicate) minerals includes several closely related materials having highly perfect basal cleavage. All are monoclinic with a tendency towards pseudo-hexagonal crystals and are similar in chemical composition. The highly perfect cleavage, which is the most prominent characteristic of mica, is explained by the hexagonal sheet-like arrangement of its atoms. Mica has a high dielectric strength and excellent chemical stability, making it a favored material for manufacturing capacitors for radio frequency applications. It has also been used as an insulator in high voltage electrical equipment. It is also birefringent and is commonly used to make quarter and half wave plates. 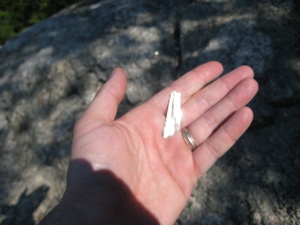 “Birefringent?” That’s right, birefringent. Okay, I’m just kidding with the nerdy preceding paragraph, but check this out; large deposits of sheet mica were mined in New England from the 19th Century to the 1960’s. Large mines existed in Connecticut, New Hampshire, and Maine.

And I’d be a fool if I didn’t mention that life possibly began in mica! 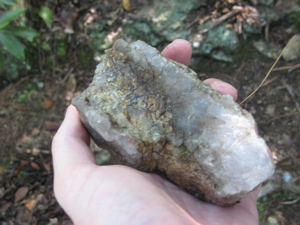 How about a nice hunk of rose quartz (I’m guessing) too?

Enough about minerals for you? Yeah, me too. Let’s hike down off the ledge and back into the woods: 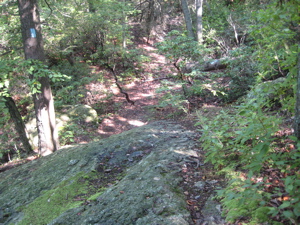 This picture clearly represents walking off the rocks and into the woods.

There are a few other trails up there which go who-knows-where. One had some significant signage (the Maria Schmidt Memorial Trail) but I can’t find anything online about it or its namesake. Just off the cliff face, there are large patches of the softest green moss I’ve encountered in Connecticut: 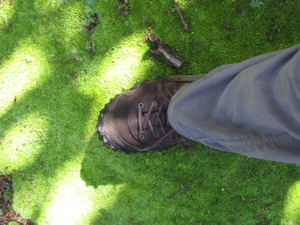 In addition to that, there are other swaths of multiple types of mosses and lichens living in harmony: 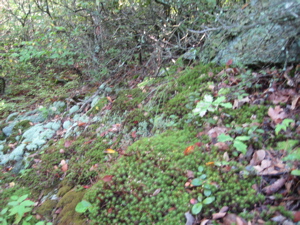 I’ll spare you a moss missive and leave it by saying, it’s pretty cool. Once down the eastern slope, the trail passes “The Pyramid,” a large glacial erratic boulder. This boulder did not impress me. In fact, most boulders with names in my state don’t really impress me, but I must note them because they have names. Make sense? 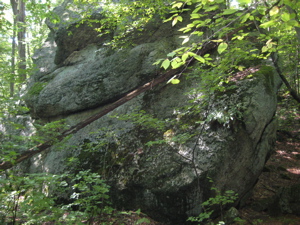 The Pyramid had no shiny minerals in it either, so it was a bit of a bust. The trail crosses a dirt road that gives access to Cream Pot Road. See? 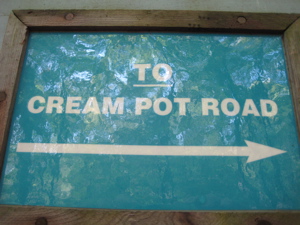 There is parking a very short distance away which would be a great spot from which to walk up to Mica Ledges. I highly recommend it; it’s right off of Route 77 in Durham. The trail then heads north again alongside a nice pine and hemlock forested brook.

This section is pretty cool as it is very dark and wet and still. There are also the biggest lichens I’ve ever seen in my life: 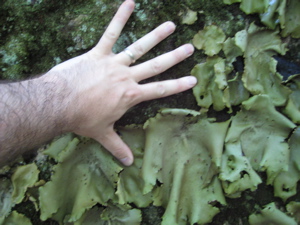 That can’t really be lichen, can it? I doubt it…

A short, steep climb follows and then there’s this sign: 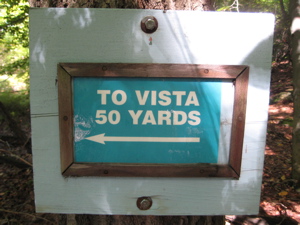 As you know, I’m always game for a vista… So I marched half a football field, and… 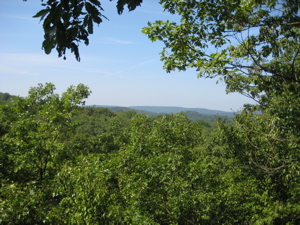 … And weak! I’m sure it’s a tad better in winter, but really… there are enough amazing views around here that there is no need to send unwary hikers down a path to see that essentially nothing. Hopefully the next outlook would be better.

2019 Update! The CFPA’s online maps have happened since I wrote this, and I just noticed this: 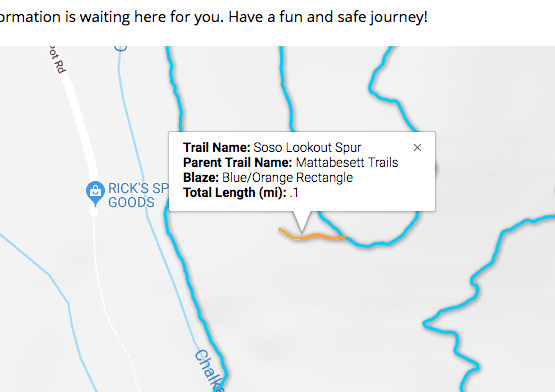 I climbed up the 644 foot (hey man, this is eastern Connecticut, 644-feet is high!) Mount Pisgah without much hope for a spectacular view… My hopes changed as I saw the clear sky beyond the trees… 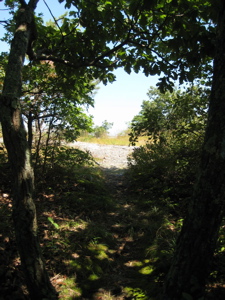 Before looking outward I noticed there used to be a benchmark here, but since it was copper and probably fetched some meth head five bucks, it’s gone: 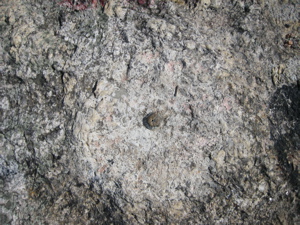 I raised my head to take in my surroundings and…

Wow! Amazing! I just couldn’t believe how nice it is up there! Oh… wait… hold on. That’s the view from Mount Pisgah in North Carolina. (That’s the famous Cold Mountain dominating the center of the shot, by the way.) Here’s our Pisgah view: 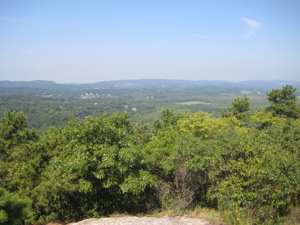 Okay, not bad. Not bad at all. The summit area is really pretty nice as it has a feeling of being a true summit and not a large plateau or long stretched out cliff walk. I left the view and descended down to my first road walk in a while.

The walk down Pisgah Road is not bad, as it has a woodland feel. There’s even a little dam waterfall if you’re into such things: 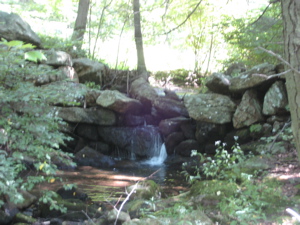 But once across Route 79 and onto Old Blue Hills Road, the trail enters suburbia. This is where Vin Baker’s ex-house is and the trail actually passes right by Stephen Woods Lane. As you can imagine, I was darn excited about that.

The trail veers off into the woods after a road walk at which point I encountered a rather unique sign forcing hikers to drive up and over a large curb to park off the (wide, sparsely traveled) road. Then there was an addendum about not turning around in the driveway across the street because you might run over the kids who live there. Fair enough, I suppose. There was a car dutifully parked on the grass. No word on where they turned around though. 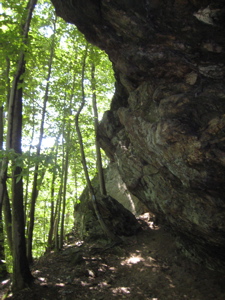 After a short jaunt through the woods, I came across the last point of interest on my hike: Coginchaug Cave. As longtime readers know, Connecticut doesn’t seem to have any real caves, just slabs of rock that act like roofs and large cliffs with space underneath. This “cave” fits the latter bill. At least it’s huge, I’ll give it that. 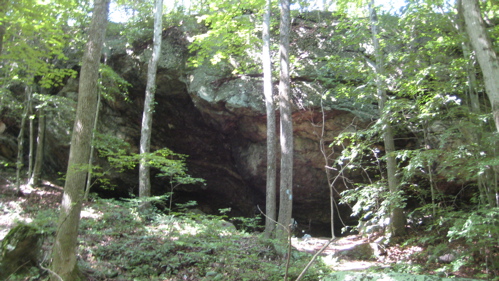 There was evidence of a campfires and other highschool shenanigans, but it wasn’t too bad. Being so close to a road must make this a challenge to keep clean. I left the cave after poking around a bit more and climbed up another short side trail to see the Pine Knob Overlook.

Here’s the deal: Getting up there is moderately challenging and here’s what you get for your efforts (in 2008 anyway): 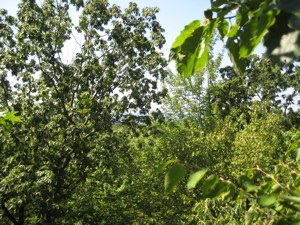 Seriously. As this was my last (supposed) view of the day, I was a little disappointed but I got over it quickly. As I’ve said, there are other great views down here, so the weaker ones don’t ruin the Mattabesett at all.

The last mile or so is unremarkable, and this report is way too long as it is, so I’ll get to the end in a flash: I walked north, it was pretty flat, I crossed a few streams, crossed Higganum Road, saw a dead hawk, and then reached my car along Harvey Road in Durham, safe and sound.

A great day out for the most part with some highly recommended sections for other day hikers. 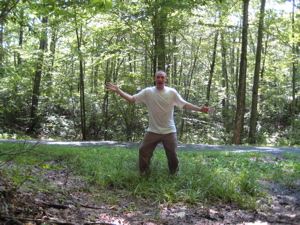