It appears the CLCT has cleared the trails I couldn’t hike properly. Which is nice.

Son has another Bouncy birthday somewhere in Canton, check.
Dad can’t wait to, um, foster his son’s independence, check.
Canton has an unhiked property, check.
Dad has will to hike it, check. 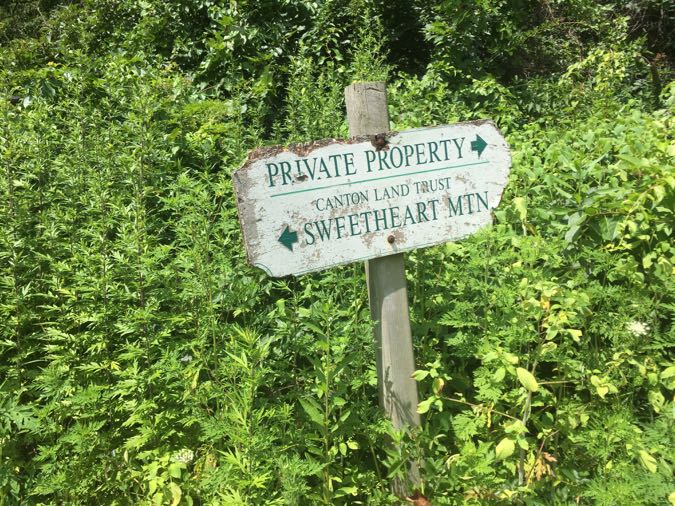 There are a few interesting things about Sweetheart Mountain: Its cutesy name (it sounds like a LEGO Friends set), the fact that it was a ski hill from the late 1940’s all the way until 1975 (more on that below), that it takes hikers into Burlington (which isn’t actually interesting to anyone in the world but me) and that, according to the developer on the mountain, the trails here may be/may have been expanded a bit.

The hike began inauspiciously. The main trailhead sign was overgrown. And once I got going up the trail, the my planned route along the yellow trail was… not going to happen: 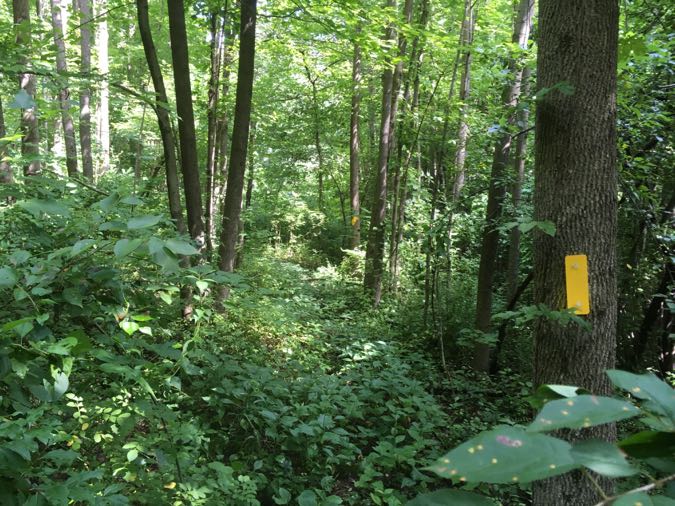 I continued. There are three trails here: Yellow, Red, and Blue. I think the picture above is from some extension that never happened or will happen or did happen and was never cared for. The “real” Yellow trail is perfectly passable and quite nice. 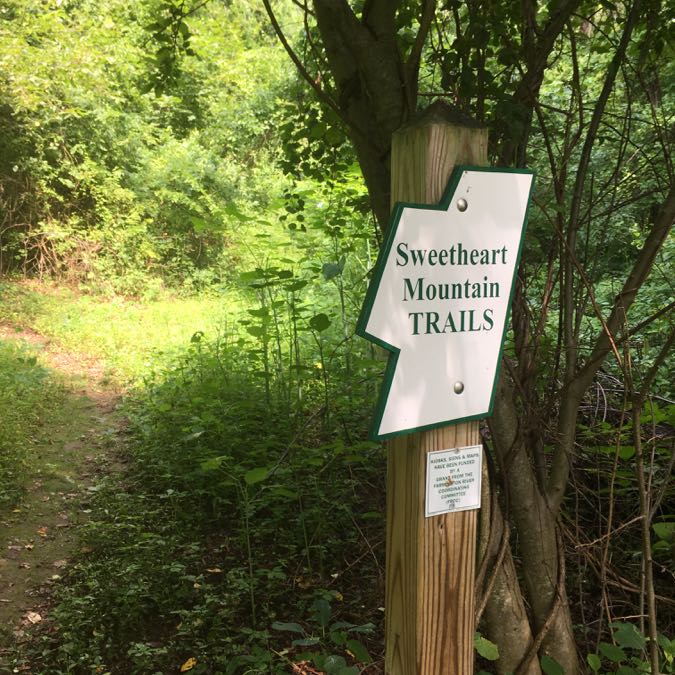 The climb is indeed a climb, but even though this is called a mountain, it’s also in Canton, Connecticut. It’s a big hill. About halfway up it, there’s a cement tub of sorts with what I assume is a spring. 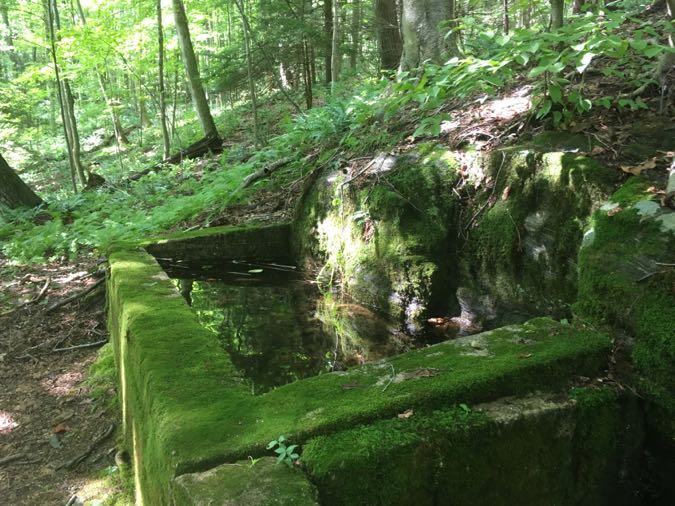 It seems like the type of spring locals collect gallons of water from, but I have no idea. I was struck by some of the trailwork here though; real stone stairs and such.

I’m not sure if they are remnants of the old ski run here or something the CLCT added. Speaking of the ski run… Via the short red loop trail I found the machinery from the top of the ski lift. 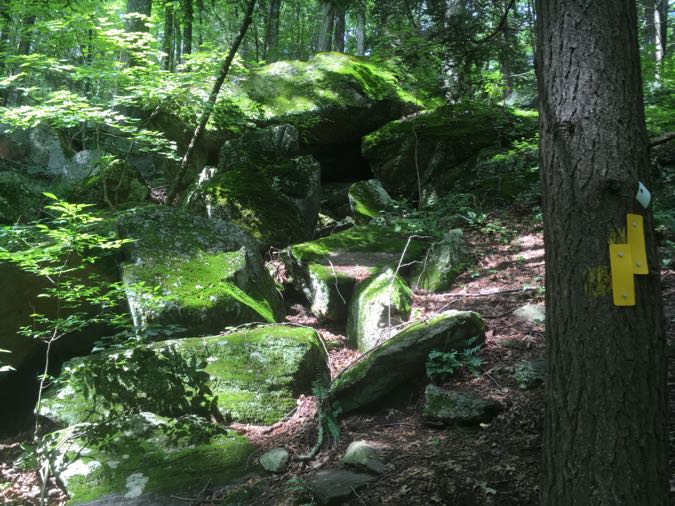 It’s kind of weird that it’s just accepted that abandoned ski area can just leave their junk in the woods. And we’re all okay with that. These “ruins” are younger than I am, so it’s not like some sort of historic record. Sweetheart Mountain isn’t alone in this at all. Moving on… 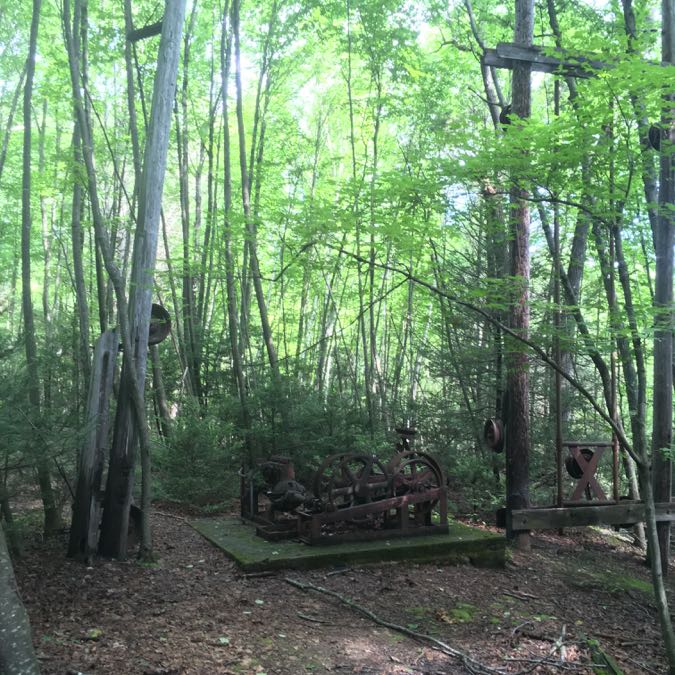 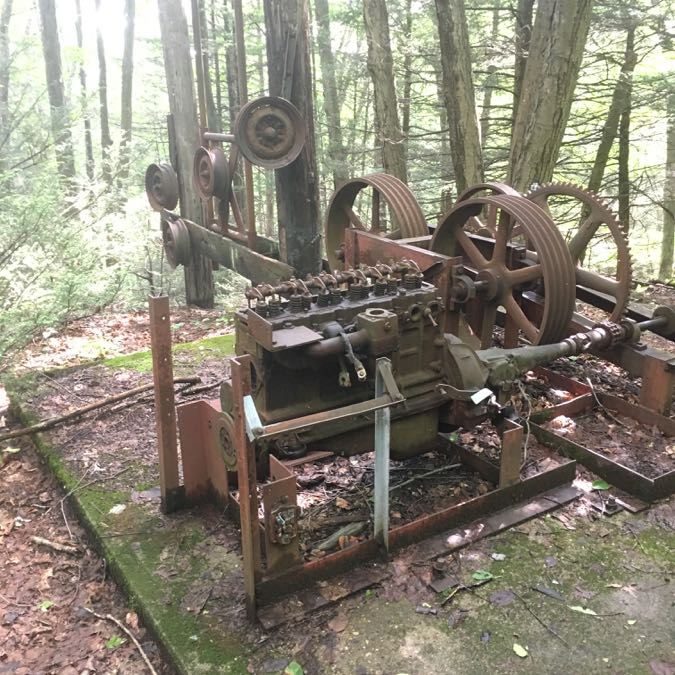 The main (yellow) trail continues upwards and into a really cool laurel, boulder, cliff, and hemlock area which I wasn’t expecting at all. The trail is poorly marked at times, but that small problem is offset by the trail’s need to hit every exposed rock face and little cliff. 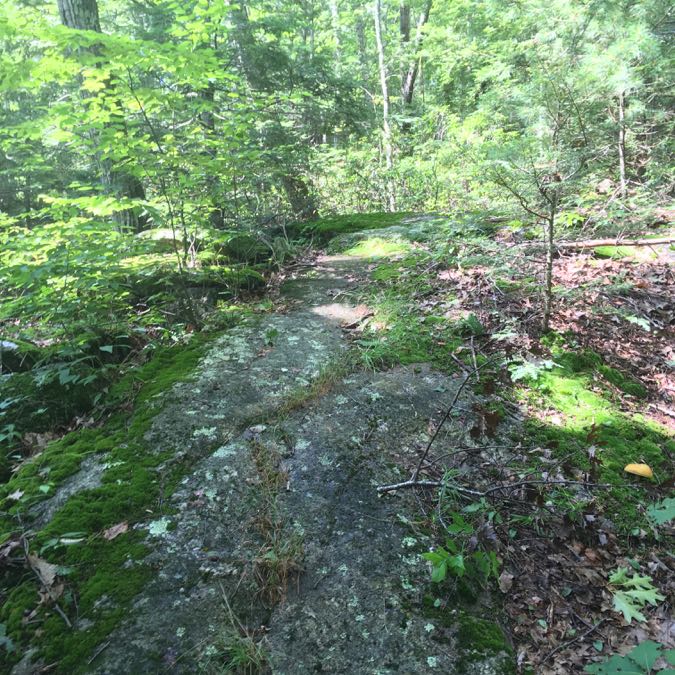 It also took me into Burlington. I had mentioned earlier about how this “excited” me. And it’s true! For now I only had one or two more little things to do in Burlington for CTMQ before “completing” the town! 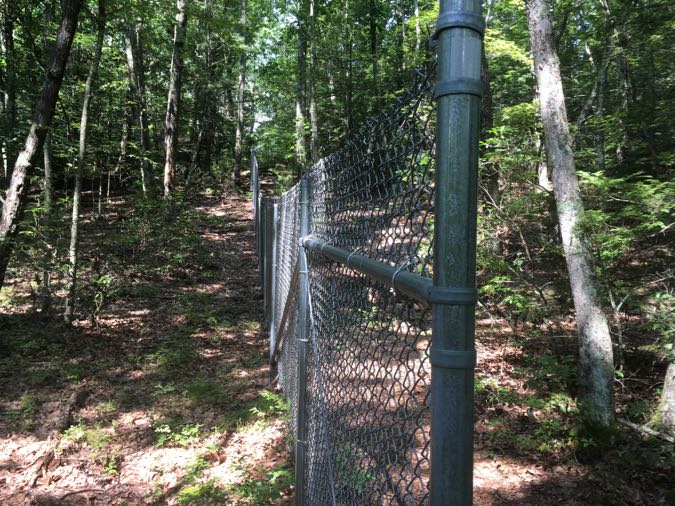 I came upon a fence up on town of the hill and an area for hunting. Because chain link fences always work. The weirdest part about this fencing is that I think the one view from Sweetheart is on the other side of it. But I’m not sure. I poked around a bit and found myself walking a trail towards the McMansions that were recently built up here. 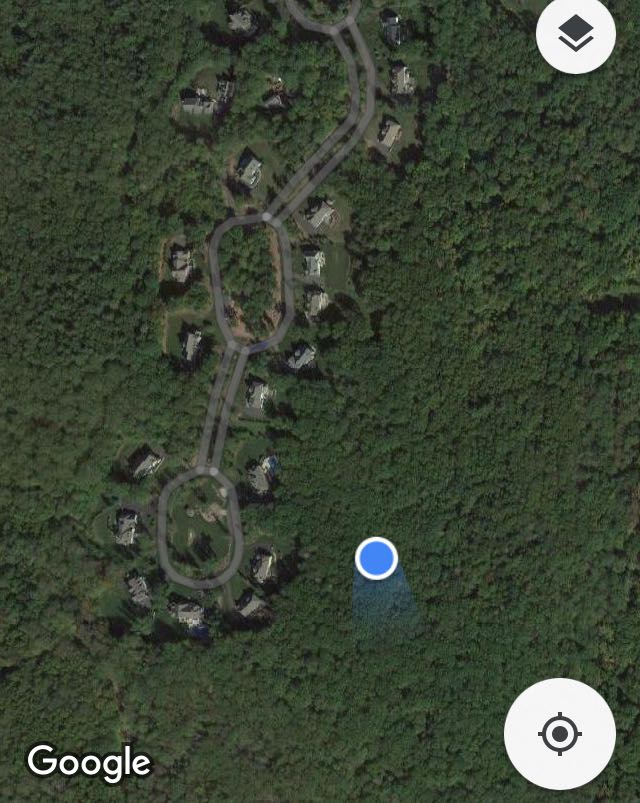 There I am in the woods… it’s pretty cool that there is a connecting trail that (I assume) goes through those trees to the road. And it appeared to be fairly well used as well.

Back down and around the yellow loop through a ton of ferns and mushrooms – this has been a very wet summer – and onto the Blue loop trail. 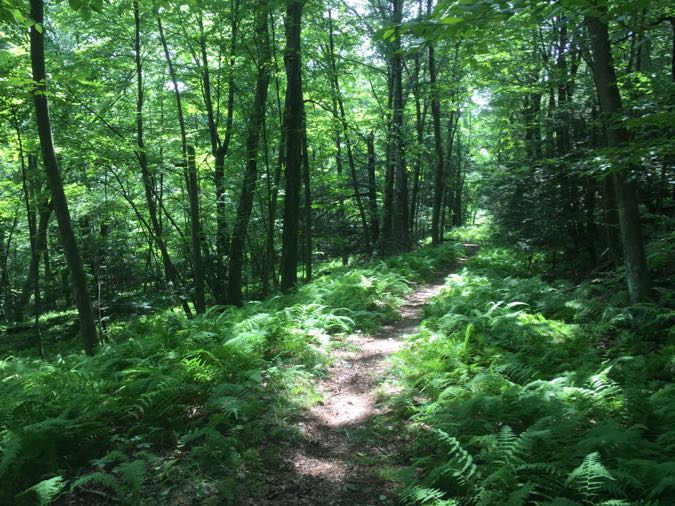 More ferns. More mushrooms. More giant houses. As I neared completion, I could sort of see more trails, or at least ideas for trails, as mentioned in that link at the top of this page. I have no idea what, if anything, will happen here but my guess is nothing. 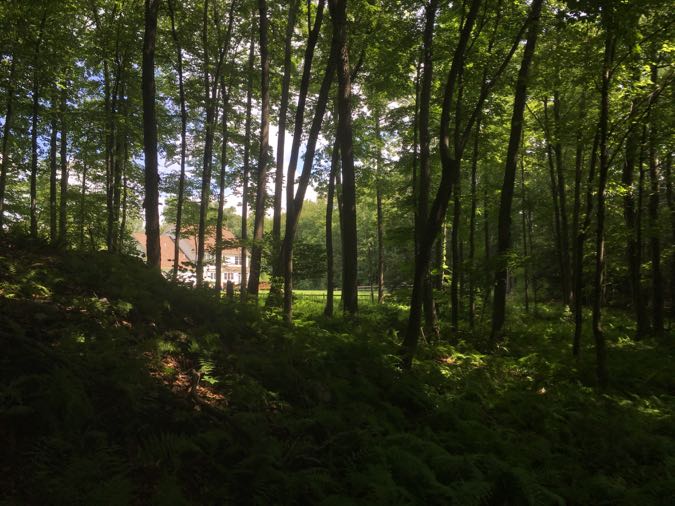 But really, that’s fine. As I made my way back to the Yellow trail, I crossed over what would have been the old ski run and… 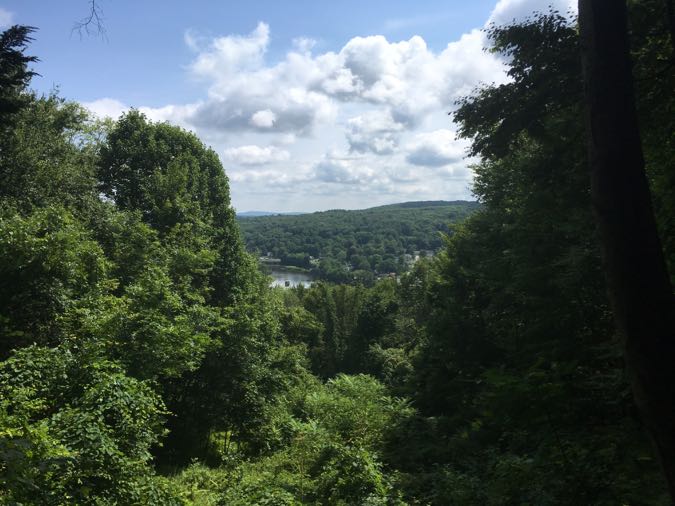 A view! A rather pretty one, too. The “downtown” Collinsville section of Canton, the Farmington River… Not the view from the top I’d read about, but good enough for me.

If you plan to hike Sweetheart Mountain, just be aware of your general direction, as blazes aren’t the best near the top. And then there are the blazes to nowhere. Just go and have fun; you’ll be fine. 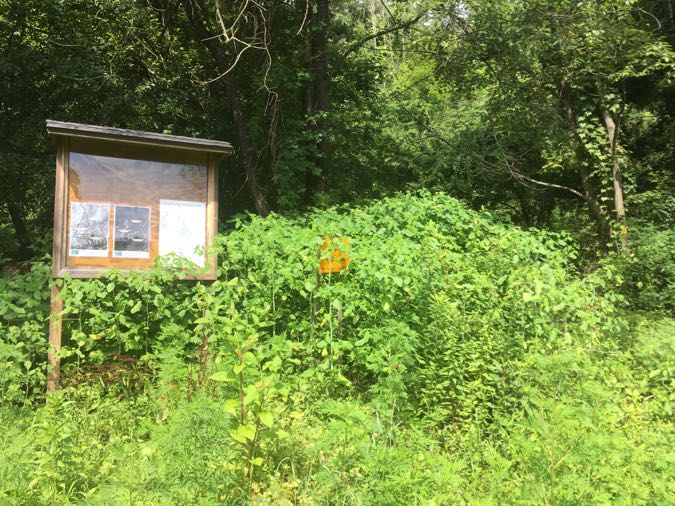