When Rob Butterworth asks you to join him on a Cockaponset hike, you clear your calendar and go. You arrive on time fully prepared, physically fit, and you listen to him while hiking. And learn… A lot. And once finished, you consider yourself lucky. 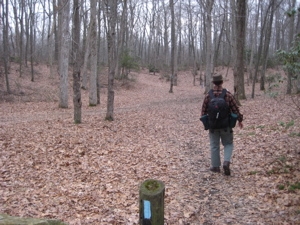 Whoa! Who is Rob Butterworth, what could I possibly have left to learn about Connecticut’s woods, and who or what the heck is a Cockaponset?

Cockaponset was an Indian chief who was buried in the Ponset section of Haddam (where our hike conveniently began, right off of Route 9). Today, the Cockaponset State Forest is the second largest forest in the Connecticut state forest system, encompassing over 16,000 acres of land. The forest is disjointed, and is comprised of land all over the place in the towns of Haddam, Chester, Deep River, Killingworth, Durham, Guilford, Madison, Clinton, Westbrook, Middletown and Middlefield. 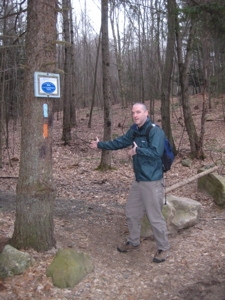 Several CFPA listed trails wend their way through portions of the state forest, but the trail I’m writing about now shares the name, so that’s why I keep droning on about it.

Okay, so who is Rob Butterworth? First and foremost he reads and enjoys my hike reports, so he’s obviously cool. He is the trail manager/maintainer for large portions of the Cockaponset Trail and the other four trails that more or less parallel it as well (at the time of this writing). In other words, if you’re going to hike a trail, who better to do it with than the person responsible for its upkeep? In addition to that, Rob also knows a lot about the local geology and history… So yeah, he’s definitely someone I’d like to hike with. 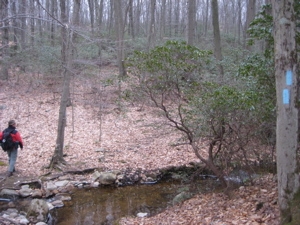 And so I did. We parked and met at a commuter lot which required a five minute walk to the trailhead. There is space for a couple cars at the trailhead, but apparently Beaver Meadow Road is a race track and the commuter lot is safer – Pro tip from a local.

The Cockaponset is a North-South Trail and the plan was to hike it to its southern terminus and then make our way north back to our cars via the four CFPA-listed side trails (South and North Pattaconk Trails, Old Forest Trail and Wildwood Trail) which is exactly what we did. 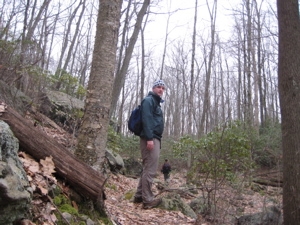 The first parts of the Cockaponset were developed in the 1930’s by the Civilian Conservation Corps. Almost immediately Rob began pointing out the grading and stonework that has lasted over 70 years. Also immediately, I learned that hiking a trail with the guy responsible for it requires a little extra effort.

Trails go through forests. Forests are alive and growing. Wind blows and dead branches fall, not to mention entire trees. Every step of the way, Rob vigilantly moved aside any stick or rock that may cause someone to trip along the way. He dutifully jotted down detailed location notes when we encountered something that would require more work at a later time. He picked up any and all litter. He instilled a level of guilt into me that I’m not sure I’ll ever be able to shake. 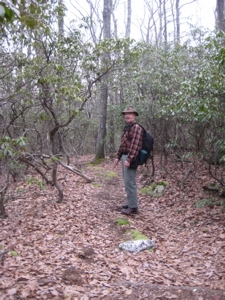 What I mean is, I found myself kicking aside all sticks and bending down to pick up any larger ones. I spent time here and there heaving entire logs and trees out of the way when possible. I always pick up litter… Now I was spotting cigarette butts and shoelace tassels. If hiking 14+ miles isn’t enough of a Sunday morning workout, next time try bending down and up 500 times on your trek. Your thighs and butt will let you know how you did the next day.

But that’s only a small part of the fun of hiking with someone like Rob. The mind of a trail manager is different than the average hiker’s. He sees the optimal route a trail should take contouring alongside a hill, or perhaps attain the modest ridgeline instead of up the reentrant where water flows during rains. He notices where a couple little switchbacks would add a few more steps to a hike – but potentially several years of added stability to the trail. Far from being annoyed by such anecdotes, I was constantly encouraging them along the way. 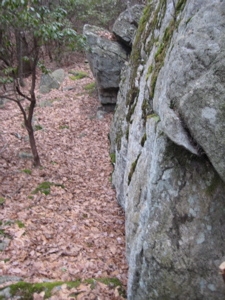 Just in the first half-mile alone, I was shown where the original trail used to go, where Rob plans on shifting the trail up onto a little hill in the next year or two, where the CCC used to camp while developing the area, where clever anti-ATV stream work has failed and so on. I was eating this stuff up.

As we hiked through laurel thickets along mostly flat land, Rob explained a lot about the CCC and what they did throughout Connecticut. There are some potential parallels today with some of the job creation programs President Obama and our Governor are proposing. One job that won’t be coming back is that of the collier. 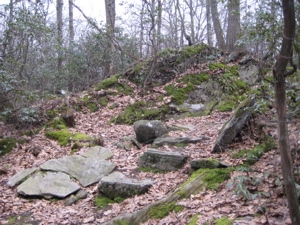 A collier is the term used to describe the guys back in the eighteenth and nineteenth centuries that made charcoal. All throughout the woods in the east there are flat squares in the woods where they used to do their dirty work. (Really, the work was quite dirty.) I was shown an absolutely massive charcoal burning hearth a couple miles in. Want proof? Here you are: 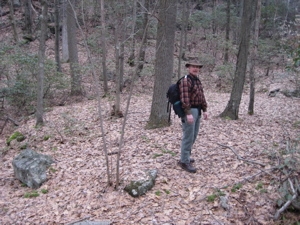 Now that’s exciting stuff! Later, there are other smaller platforms with signage and everything. We reached Rob’s favorite little section of “his” trail after another mile or so; here, the CCC went positively nuts with their skillful stonework. There is a series of steps built into the short, steep hillsides that sort of wind around in a rather artful and quite impressive way. 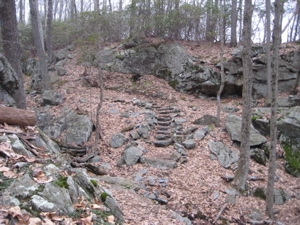 After a walk down a little rise and then into a dip below a decent sized rock cliff, Rob joked that this may be the only CFPA trail that doesn’t then bend back on itself to attain the top of that cliff. I’ve hiked a few hundred miles of the CFPA trails now and I can confirm his joke really isn’t that much of a joke. This time, I merely admired the looming rock and continued southward.

We soon came upon the remains of an old CCC observation tower. Four large concrete blocks are pretty much all that remains but fifty years ago, day hikers could climb this tower and view… not too much according to Rob. A reservoir or two and a couple bumps of hills, but not much more. It’s really no wonder why no one maintained the tower. 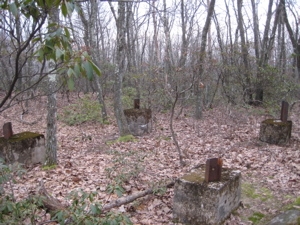 Incidentally, the Walk Book map calls this “Fire Tower Remains” but it was never used as a fire tower. Thought you’d like to know.

Shortly after that, the trail descended a nice set of stone stairs near the third Jericho Road crossing. The Wildwood Trail (our last trail of the day) begins here, but I wasn’t too sure why we’d stopped or why Rob was looking for something in his pack.

He pulled out a little CFPA brochure from a year or two ago – the one that was stuck in any available kiosk around the state drawing attention to the trail system. He held it up and out and arms length and – cool! There were the very stairs right in front of me! 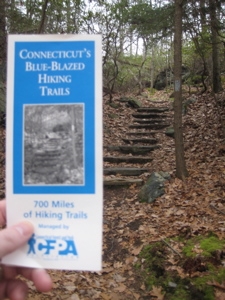 (Random facts: There are two Walk Books and I’ve previously enjoyed – but never mentioned – being in the spots the cover shots were taken. Both, perhaps surprisingly, are in Meriden. Anyway, I was just looking for something in the West Walk Book and remember those laurels I mentioned hiking through above? Well, on page xvi of the forward, there’s a nice full page picture of some laurel in full bloom courtesy of none other than… Yup, Rob Butterworth!)

The same picture of the same steps graces the trail data page in the Walk Book. These are some famous steps! Just beyond them, there was a black little pond by the road. Rob explained how this was a CCC-made pond created for fire-fighting use. They lined these types of ponds with less permeable clay and other materials that apparently absolutely reek if you step into them. The things I learn… 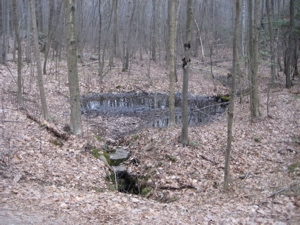 Oh, there was more. Much more. We passed a large boulder with little holes all over it. Geologists call this “pocketing.” I’m sure it’s caused by water somehow, but I didn’t ask as geology wasn’t my “thing.” Biology was and we were entering a very interesting plot of land out here in the deep woods.

I’m sure I’ll get the details wrong, but there is a plot of land actively monitored by the Connecticut Agricultural Experimental group and also studied by various groups at Yale and UConn. Essentially every single plant over an inch tall has been catalogued and monitored through drought, heavy rain, snow, heat, fire, etc. Gypsy moths have been studied here as well as invasive plant species reproduction. On the CFPA maps, this area is the rectangle just north of Old County Road. 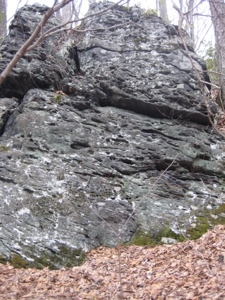 Just south of that road, as we continued our hike, we happened upon a couple young fellows with full backpacks. This was the first time I heard Rob’s pickup line: “Hello! Are you enjoying the trail? You better be because I bend over and pick up sticks along its entire 7+ miles on a rather frequent basis. I also reblaze it and reroute it from time to time to give you a better outdoors experience.” 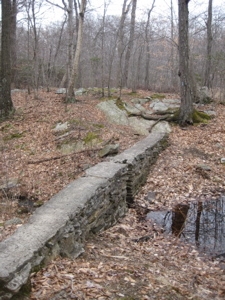 Okay, he didn’t say all that. In fact, he was always cordial and thankful to see others enjoying “his” trail, which was cool. I found identifying himself as the trail maintainer was beneficial, if only to make the others think a little bit more about tossing a piece of litter or picking a flower.

Anyway, those two chaps were preparing for an attempt at thru-hiking the Appalachian Trail. I helpfully dropped my trail cred onto them and we had a 20 minute conversation about a thru-hike. Their first question? “How much money did you bring?” which I found sort of odd. Then again, that dude was wearing skateboarding sneakers and jeans which I helpfully explained weren’t his best options for the ups and downs of the AT. 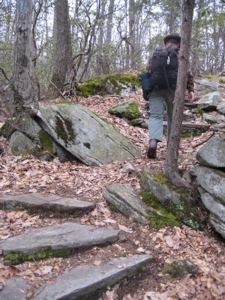 I wish them luck, but I’m not sure I have too much confidence in their chances. When we told them we were doing about 14 miles that morning, they seemed incredulous. 14 mile days are de rigeur on the AT.

We moved on and quickly reached the Pattaconk Reservoir area, hiking up on a small rise west of it for a little while before reaching the parking area. It was quite large and well-maintained, but of course empty early on a March Sunday morning.

The remaining mile and a half was fairly unremarkable, save the great conversation Rob supplied. It was really cool walking with one who obviously loves these trails even more than I do. And to his immense credit, he even joined me on the last little quarter mile “tail” out to Route 148 to officially finish the Cockaponset when it really was not necessary (for him).

He even seemed excited to take my goofy finishing picture for me, and I was honored to have him do it. (And, it must be noted, Rob was cool with me taking a ton of him.) Then we turned around and walked back north along the four side trails mentioned previously – but with a good deal along the Cockaponset again. 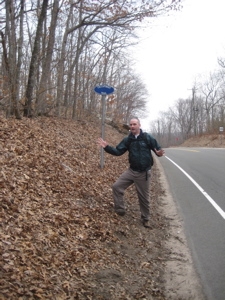