The word “iconic” is tossed about the American lexicon with wild abandon these days. I blame sports writers the most, but the word has invaded all corners or writing and commentating. I’m proud to say I don’t think I’ve used it more than a few times on CTMQ. So please, recognize the impact the next sentence after the picture should have on you. 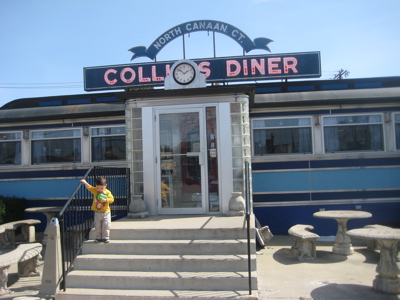 The Collin’s Diner in North Canaan, Connecticut represents the iconic American diner. It is perfect in every way: It is located in the far-flung northwest corner of Connecticut, It is 80 years old, it is tiny, it is set off of a relatively well-traveled two-lane road, it is located at an old train depot, the menu is classic but with an ethnic twist and the staff is wonderfully – and naturally – nice.

I stopped in for lunch one gorgeous Saturday with Damian after taking him to Campbell Falls (here) and the Last Post Retirement Home for Cats (here). Damian was being well-behaved, so I gave it a shot; what the heck, it was past 1 o’clock so the place wouldn’t be too busy. 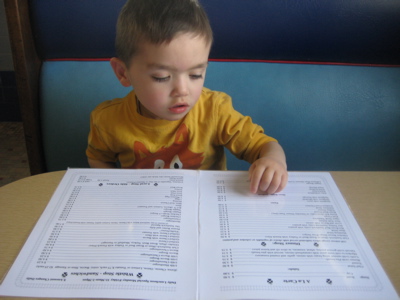 I knew the place was small, but man, it’s tiny! Only 6 booths and 17 stools at the counter. It is very clean and the art deco décor extends throughout. Damian and I took a booth and perused the menu… All the typical diner stuff is here, but owing to the owners’ Lebanese heritage, there are some unique middle eastern dishes one does not expect to find at tiny New England diners. The Hamzy family has owned Collin’s since 1969, and as a result the fare includes hummus, tabouleh, and stuffed grape leaves.

[Random aside: I was in Winsted last night hanging out with Ralph Nader and his sister talking about making history more local eating a bunch of Lebanese food. Yeah, that’s right… I’ve reached that level of cool.]

The diner itself is a 1941 Jerry O’Mahony Diner. That doesn’t mean anything to me either, but it’s important to those in the diner culture. 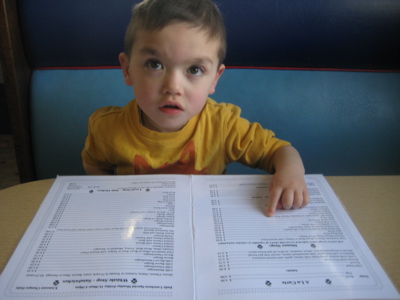 I ordered for both of us (Chicken fingers for him, turkey sandwich for me) and we patiently waited. While waiting, I looked around and really took in some of the history.

The original structures are still intact: The black marble countertop, the stainless steel frame – inside and out. Heck, the stools and booths are all (re-covered) originals!

The diner has been used in TV commercials and movies as well. Most impressively, the hyper-realist painter Ralph Goings has memorialized Collin’s Diner in a famous painting.

Collin’s Diner has been named Top 10 Diner all over the place – Yankee Magazine, New York Times, Boston Globe, ctmq.org… All the heavy hitters. (And the possessive apostrophe is grammatically correct; I’ve been assured it was owned by a guy named Collin originally.) 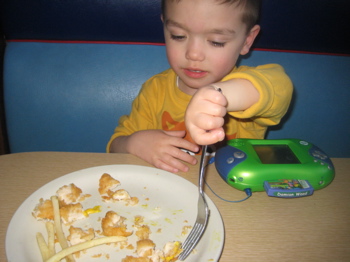 Our food arrived and then one of the more interesting/amazing things in this crazy DamianWorld Hoang and I live in happened. The waitress simply told Damian to put his electronic game away if he wants to eat lunch. (“Uh-oh” I thought.) Of course he refused and gave her his patented, “who do you think you are, lady?” look.

She then firmly told him she was taking his lunch away if he didn’t eat three bites before playing his game again. (“Are you kidding me,” I thought. I was very close to explaining that her methods might not work on a kid like mine, but decided to silently let it play out.)

She started taking his plate away and then… And then… Damian put his game aside with those giant puppy dog eyes and grabbed his plate and proceeded to eat three bites – all with a fork, mind you – and we all regained a sense of calm. I was stunned. 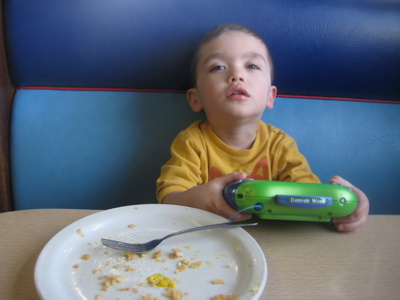 Damian and our wonderful waitress seemed to develop a bond immediately. He wouldn’t take another bite unless she was watching – either near or from afar – and every time he did, he looked for her approval. It was really neat for me to watch. I didn’t tell the waitress a thing about Damian until later (when I said he was four, she kind of “got it”) so she had no preconceptions. She just thought he was a little kid with a dad who didn’t mind him playing an electronic game while eating.

Two things: Smith-Magenis Syndrome kids seek adult approval out to an almost ridiculous degree, so that part wasn’t so crazy to me. But SMS kids have such strong affinity for electronic games/devices, for a stranger to just bluntly tell him to stop playing with it, with such directness and for him to listen and react like he did was very surprising to me. SMSers feed off of and react so strongly to tone of voice and inflection and facial expressions – Damian will often fake cry and offer a hug if you so much as make a pained expression or gets mad when Hoang is mad about something – that I really thought he was going to challenge her through violence/tantrum. But he didn’t! I was so happy and proud of my boy that day, sitting In a 70 year old booth at a classic diner in Canaan.

2019 Update: Yeah. This wouldn’t work anymore. But it was nice for me to read this now 9 years later. 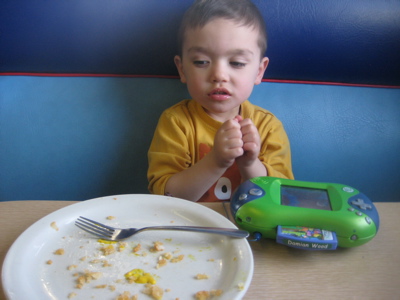 “I was not being truthful! I wish to have more french fries!”

The food was perfectly fine. Actually, Damian’s chicken wasn’t greasy and was very tender and quite flavorful. He ate it up; finished his plate and half of my fries – and then asked for more (signing “more” above.)

After we were finally finished, Damian walked behind the counter and gave our waitress a hug. Tears welled in her eyes and she said that Damian just “made her day… month… year!” Yeah, he can do that to people sometimes.

A simple lunch at a simple restaurant on a random Saturday… Which not only led me to begin another fun list on CTMQ as well as to learn a bunch about these old diners, but also another valuable lesson in not just “special needs” parenting, but parenting in general.

My life… My blog… My family. Always an adventure.