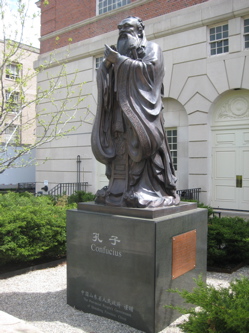 I kid, I kid… So why in the world is there a rather nice, rather large statue of Confucius, a guy erroneously known for fortune-cookie-isms who lived 2500 years ago in China?

Because it was presented to the State of Connecticut on the occasion of the 20th anniversary of our sister State/Province relationship by the Provincial People’s Government of Shandong Province, the People’s Republic of China in August, 2006. We gave them a statue of Mark Twain.

And we totally made out in the deal. Check out how lame the Twain statue we gave them is. Suckers.

The always incredible folks over at The Historical Marker Database transcribed the english plate on the statue’s base. Here’s what it says:

Confucius (551 B.C. to 479 B.C.), with the given name Qiu and stylized name Zhongni, was a native of Lu State (now Qufu city of Shandong Province) in the Spring and Autumn Period of Chinese history. He was a great thinker, educator and statesman in ancient China and the initiator of Confucianism.

Based on the circumstances of his era, Confucius advocated a school of thought with benevolence as its core value and the rites as its code of conduct, which was mostly documented in the seminal work of Confucianism entitled “The Analects”. For the past two millennia, Confucianism has impacted all aspects of Chinese society, shaping people’s way of life and social behavior, and promoting the harmonious development of society. Confucius was so highly respected that he was acclaimed “the Supreme Sage and Foremost Teacher” in Chinese society. Confucianism, transmitted across the bordering countries of China a long time ago, was of far-reaching influence in the evolution of various civilizations. Even in European and American countries there are many intellectuals who study Confucius and Confucianism. Amidst a changing world and the advancement of sciences, people recognize even more the legitimate values of Confucianism when seeking a solution to modern social problems. 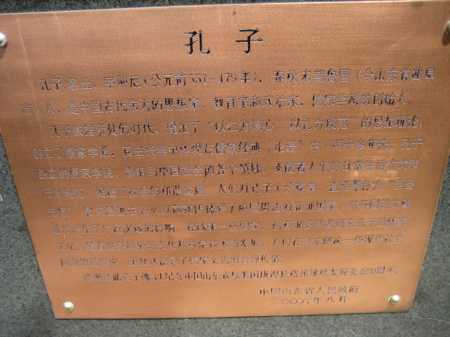 That’s what I just said.

For what it’s worth, my father in law follows the teachers of Confucius and through him, I’ve learned a few things about life. And now you’ve learned why we have a Confucius statue in Hartford.