It’s not often I find myself in downtown Deep River. In fact, I don’t think I’ve ever been there before now. It just doesn’t have the caché as say, a Chester or an Essex. Yet there it is, right between the two. Perhaps it’s a bit grittier than Chester and Essex, but come on, this is a southern Connecticut River town through and through; how bad can it be? 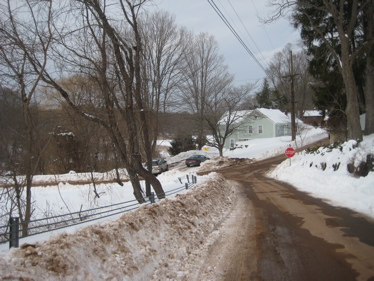 It looked lovely during my drive-through. With 2-plus feet of snow piled into mountains everywhere, I found my way to the Bill Winters Neighborhood. The roads were cleared, but very skinny and wended their way up the hill.

I have no idea which house was the house Bill Winters lived; and I don’t actually think it’s still here. But no matter, the story lives on and kudos to the town for recognizing its important Underground Railroad past with a large sign on the old building at the bottom of Winter Avenue.

The development of the Winters neighborhood in Deep River provides some answers to what became of individuals who fled northward to escape slavery on the Underground Railroad. After making his way from South Carolina to Philadelphia, Daniel Fisher was assisted by underground railroad agents. According to his own account: “In company with some Philadelphia colored people, I was taken to New York, and it was there I met members of the Abolition party…at New York I was put on board a steamboat for New Haven… on arrival a colored man took me to the Tontine Hotel, where a woman gave me a part of a suit of clothes….I was fed and made comfortable, and then directed to Deep River with instructions that upon arriving there I was to inquire for George Read of Judge Warner.” Fisher walked from New Haven to Deep River. Once settled in the town, he changed his name to William Winters and wore a wig to avoid capture and return to South Carolina and enslavement. He was joined later by other family members and friends from the South. 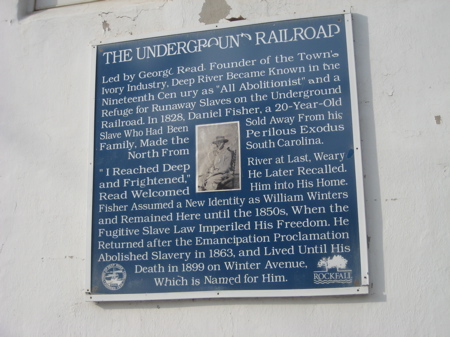