Hiking with my older son Damian is a total crapshoot. His unique brand of special needs is such that I have no idea how the outing is going to go until we get going. This hike was one of those rare and beautiful days when absolutely nothing went awry. 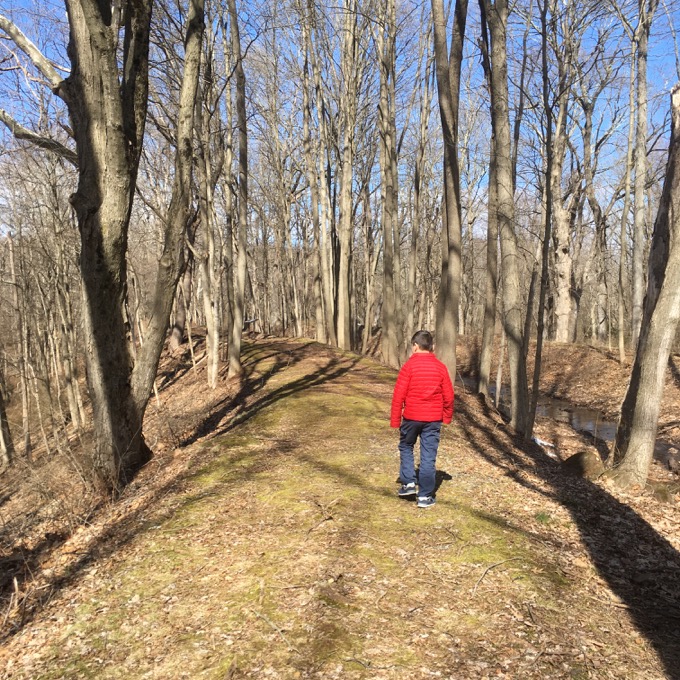 Damian seemed to enjoy himself and never once “had a behavior” or complained of exhaustion or drove me bananas. It was a good day.

Squeezed into Farmington at its northern border with Avon in between route 10 and the Farmington River, this FLT property has it all: History! Riverside beauty! Tree identification stations! Informative signage! Century-old ruins! A parking lot!

There are several sites commemorating the failed Farmington Canal around Farmington and surrounding towns. But for my money, this little hike takes in one of the most interesting aspects of the canal: the aqueduct. 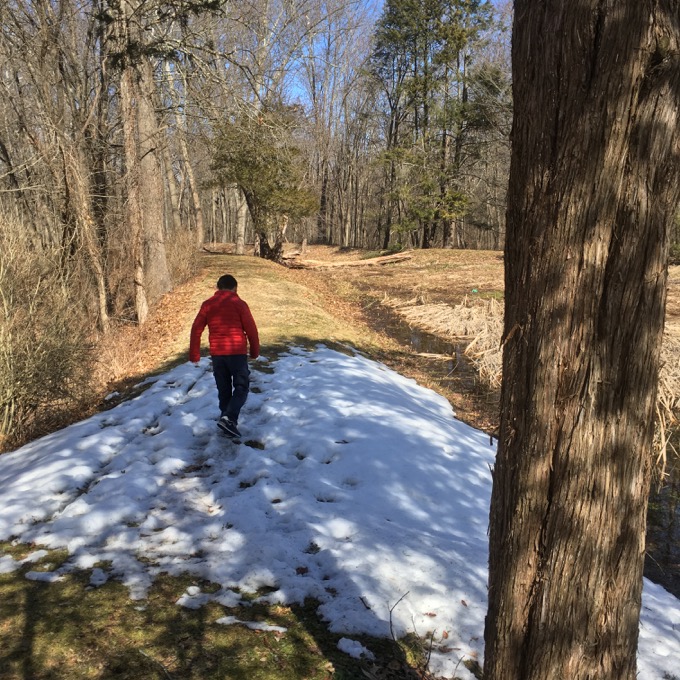 The 56-mile Farmington Canal was Connecticut’s super-highway of the 1830s and 18402. Begun in 1825, the canal was the largest engineering project ever attempted in New England. Inspired by the commercial success of the Erie Canal, Connecticut businessmen financed the waterway to open up an interior trade route between the port of New Haven and the towns of central Connecticut. Prior to the canal’s completion in 1829, merchandise had moved slowly in horse-drawn wagons over the region’s rough roadways.

The canal relied on the Farmington River for its main source of water. A navigable feeder canal carried water east from a dam built on the river near the present Farmington Town Hall, across today’s Devonwood Drive and Town Farm Road, to join the main canal at the aqueduct. 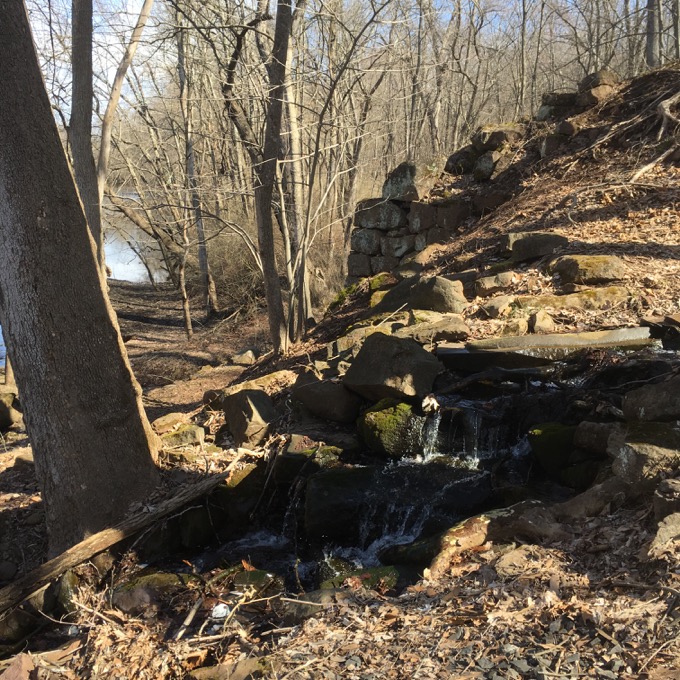 The canal was dug by hand by local and immigrant labor, using simple equipment – axes, shovels, picks and wheelbarrows. When completed, the canal’s 36-foot width allowed two flat-bottomed barges to pass each other. On a towpath alongside the canal, horses hauled the 75-foot freight and passenger boats at speeds up to four mph.

Although important to the economic development of towns along its route, the canal itself was a financial failure due to the high cost of maintenance. In 1848, the Farmington Canal Railroad acquired the right-of-way and converted much of the canal’s towpath to its rail bed. 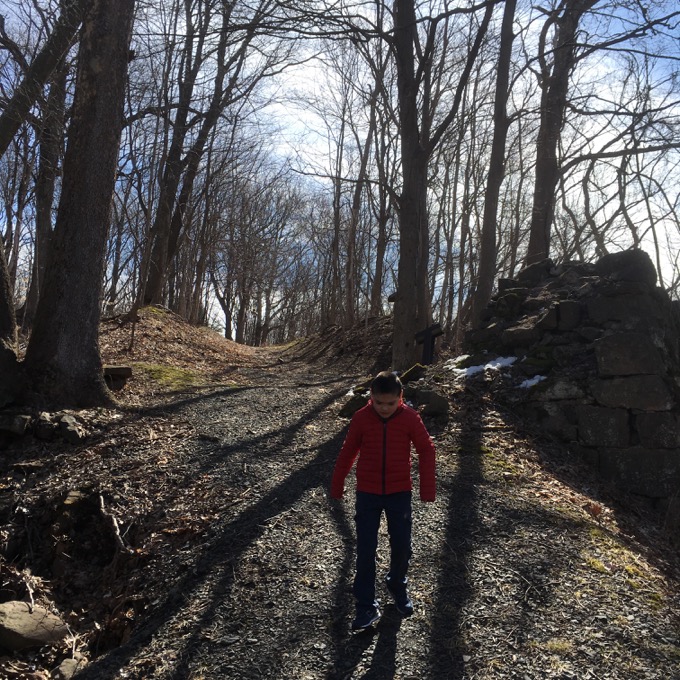 This was the site of the only aqueduct (at least in Connecticut) along the canal. It was necessitated by what was called “The Great Level.” This was the level stretch of land here in Farmington which was the longest distance of the canal at the same water level. It happened to be where it needed to cross the Farmington River, but the canal was 50 feet above the river level. 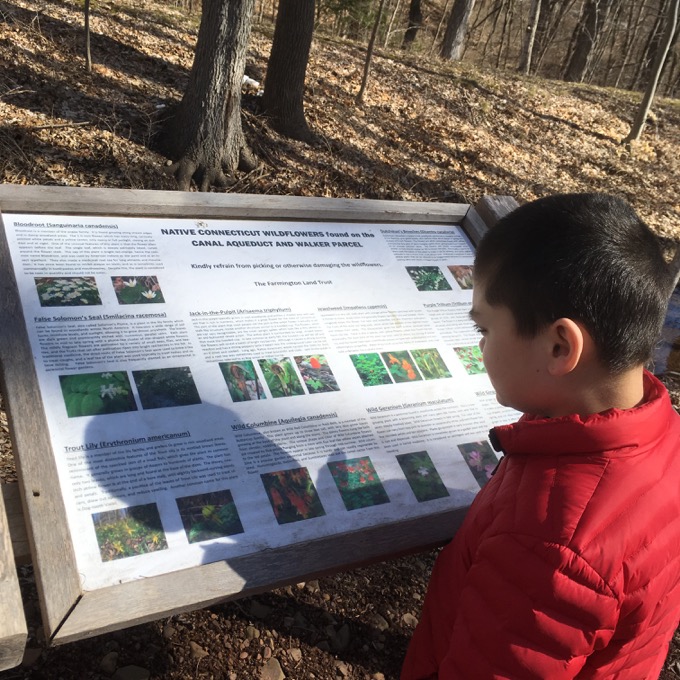 So an aqueduct was needed. The 280-foot aqueduct was spanned with 7 arches, spaced 40 feet apart. Which just seems a bit bonkers to me. The trail begins along the old towpath, which you can see in the pictures of Damian. It carried us into the woods, but once we left it and descended via trail to the riverbanks, we needed to then imagine the massive arch bridge that used to keep the level 40-feet above our heads. 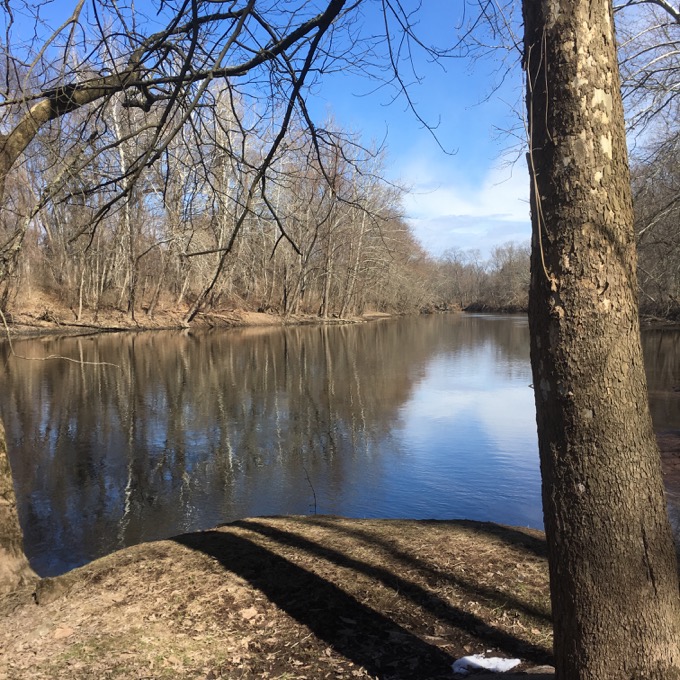 The Aqueduct contained a wooden trough 280 feet long, six feet deep and 14 feet wide, supported by two huge abutments at each end and six massive sandstone piers rising 40 feet from the solid rock of the river bed. A six foot wide wooden platform elevated along the top of the piers served as a towpath for the horses dragging the boats through the aqueduct’s waterway. Crossing the river on the Farmington Aqueduct so high in the air was a terrifying experience for both man and beast.

Man, that’s rad. I wonder how many horses freaked out up there. 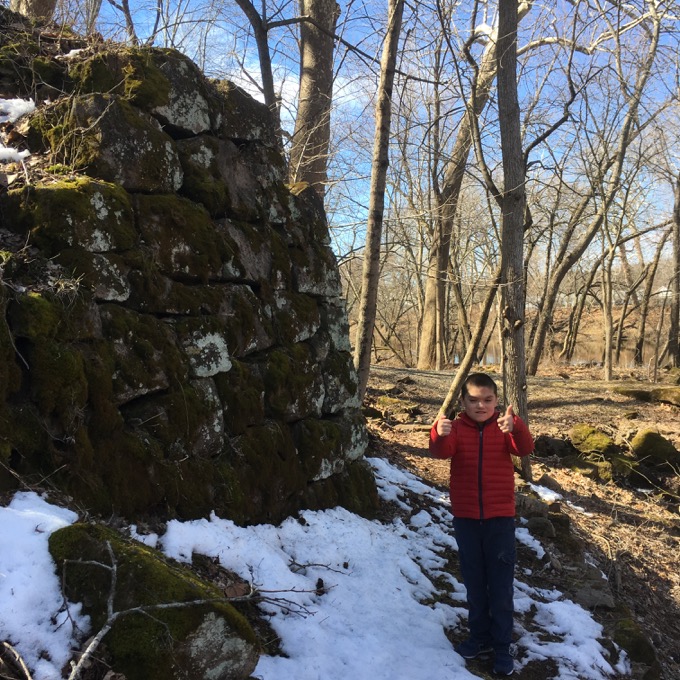 After the canal was abandoned, the whole aqueduct fell apart. Many of the stones were used to build stuff elsewhere, and almost everything else was washed away in the Flood of 1955.

Today, we can see a couple abutments and nothing more. Still, this is a really cool little walk through history. 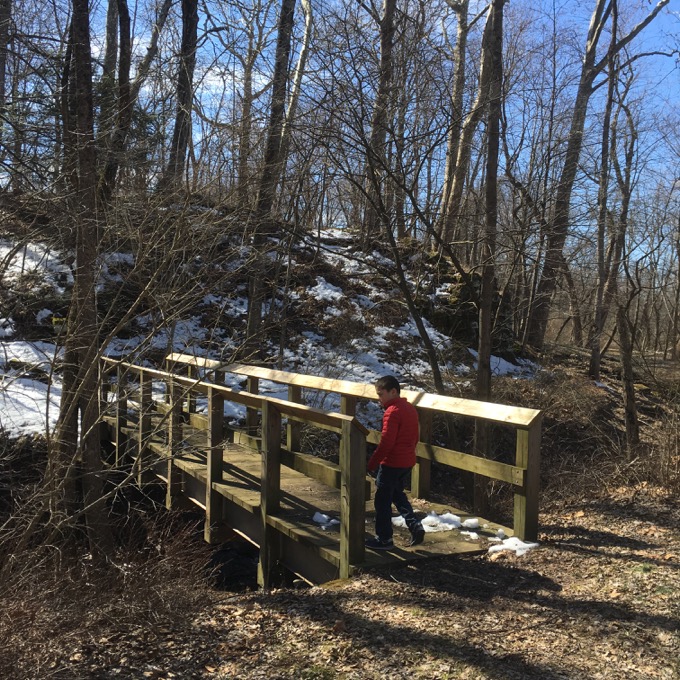 This loop trail which begins (and ends) across a little bridge along the river, provided Damian far more entertainment than I’d anticipated. Who knew he was such a tree identification buff? 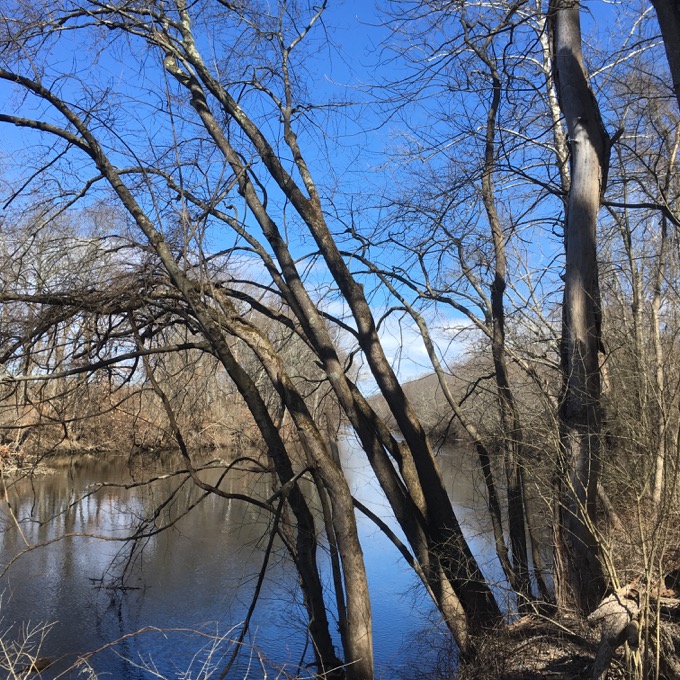 And therefore, for me. He felt the various barks, reveled in remembering the previous signs, and kept asking if there would be more. It was fantastic. 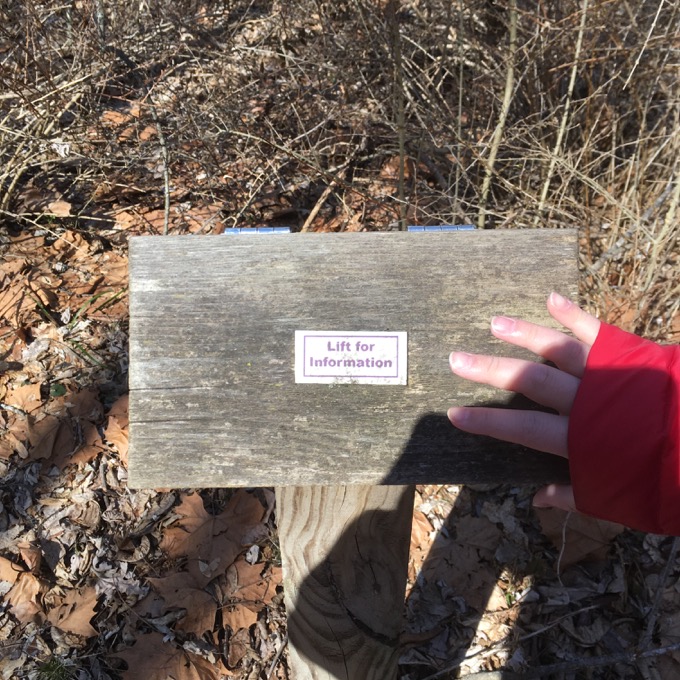 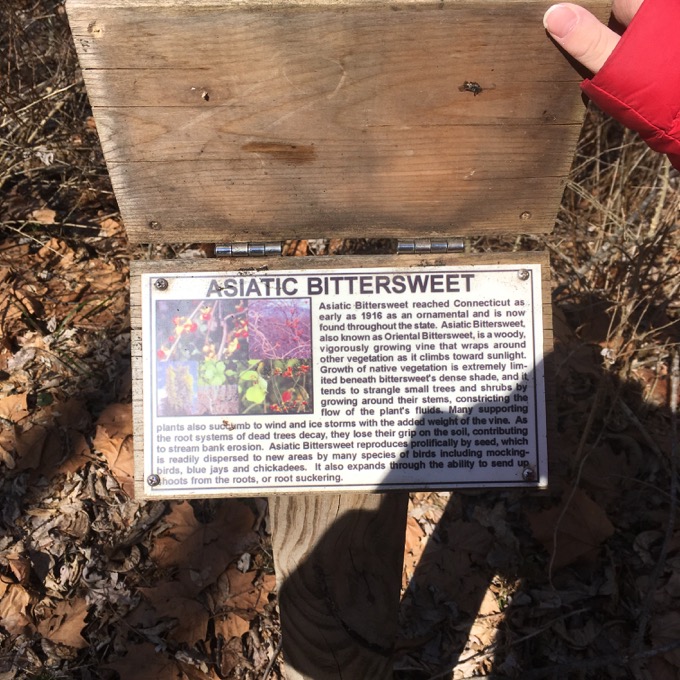 I can’t pretend he retained anything, but it was cool to watch him left each slat and read to me the tree we were looking at. There are many kids with his rare syndrome that would never do this – and do it with glee. 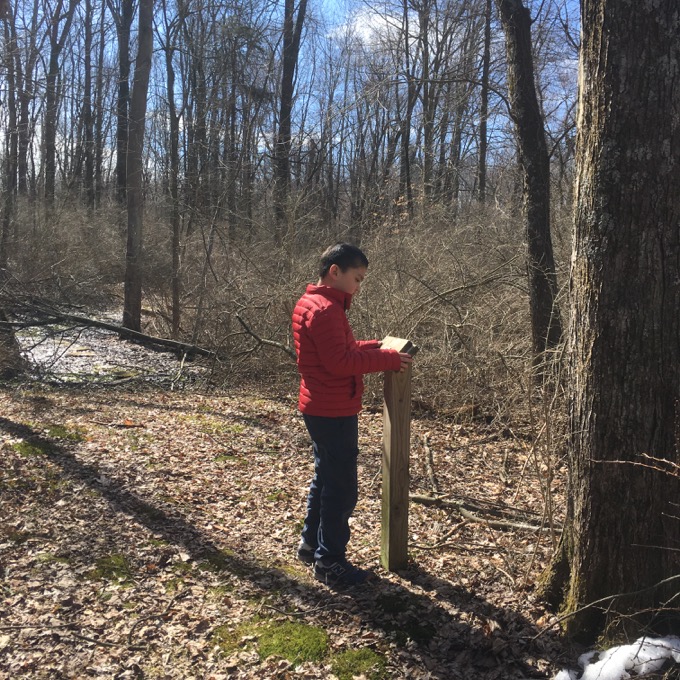 There’s no way he could understand what an aqueduct is or how canals were utilized, but trees – trees are tangible and alive. 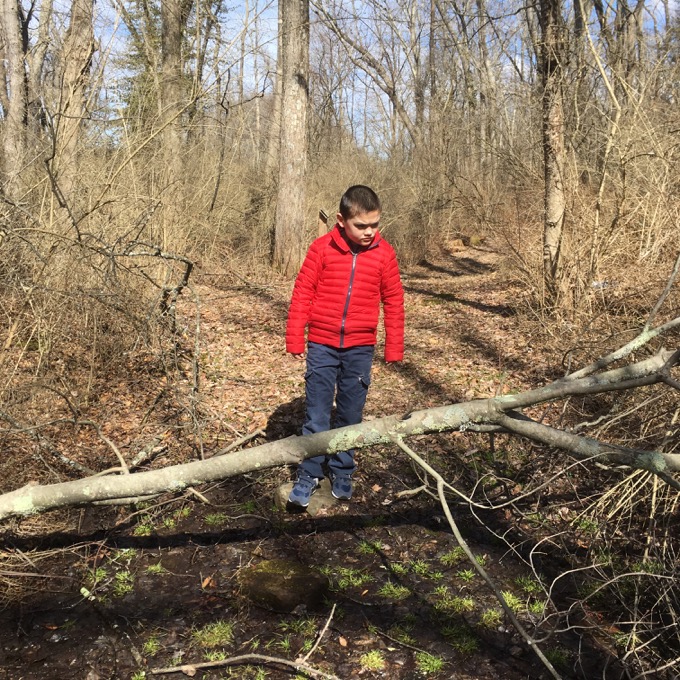 Except for the ones that are dead and blocking the trail. I’ll never not be amazed at how such simple obstacles flummox Damian – and how he approaches the problem and slowly, oh so slowly, navigates them. Most importantly, he’s now often insistent that he doesn’t need my help. It’s taken years of hikes to get him to this point, but he’s gotten there, and I love it. 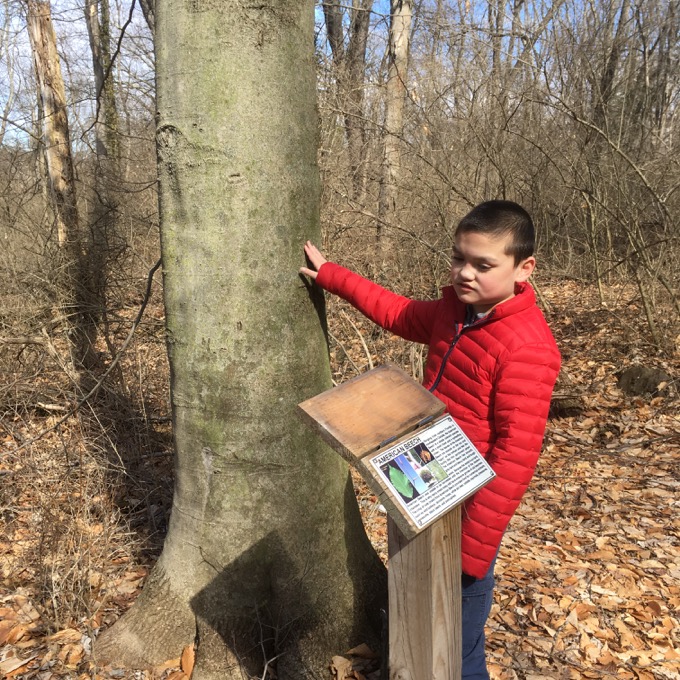 We completed the loop and Damian was sad there were no more kiosks to find. But he trudged up to hill to the towpath grade and followed me back to the car without incident. Definitely a solid time in the woods, no matter if you’re a profoundly disabled 12-year-old, a doting dad learning some cool history, or… you. 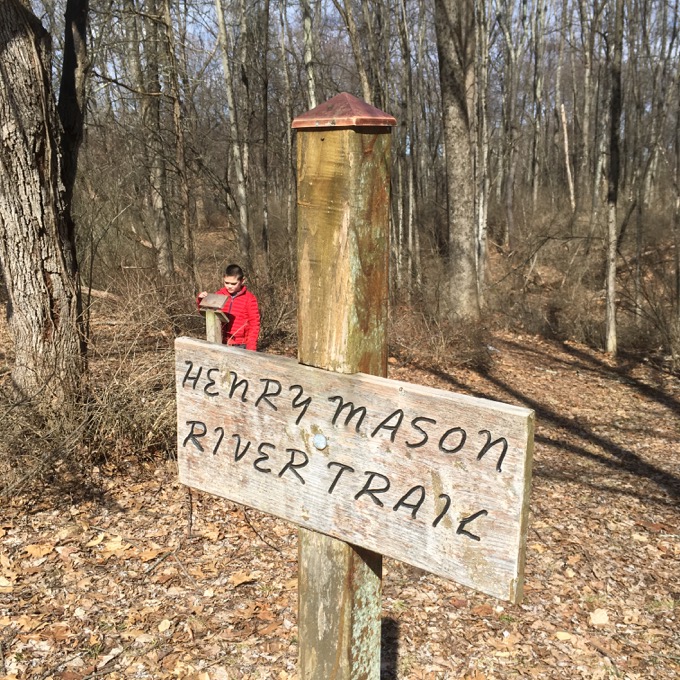