As of this writing, there are four signature trailed properties of the Granby Land Trust. Sure, they have a bunch of other parcels, some even trailed – and one containing the state’s coolest tree. 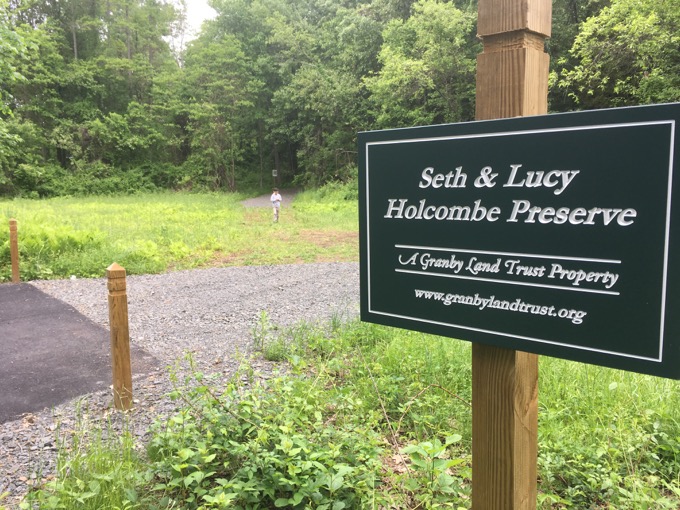 But the land trust focuses on their true gems. And they are gems. I’m so glad I was able to hike all four with my sons. The combination of natural beauty and some downright cool stuff within each makes them some of the most memorable hikes I’ve ever done.

Holcombe Preserve is the newest property. The most recently cleared and blazed anyway. In fact, it only officially opened in May 2018, and had its coming out party at Connecticut Trails Day in early June. (And don’t be confused; the town owns the also-excellent Holcomb Farm – no ‘e’ – and its trails, and the land trust holds a parcel called Holcomb Hill Preserve – no ‘e’.) 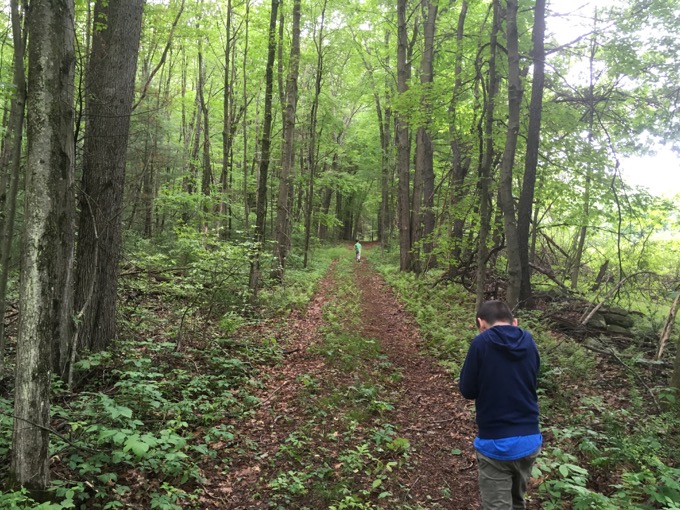 Calvin, Damian, and I beat the rush and checked it out a week prior to that and found a pristine New England forest teeming with wildlife. We all fall prey to the idea that a good hike needs a good view, but sometimes, that “good view” is underneath your feet. You just need to be aware. 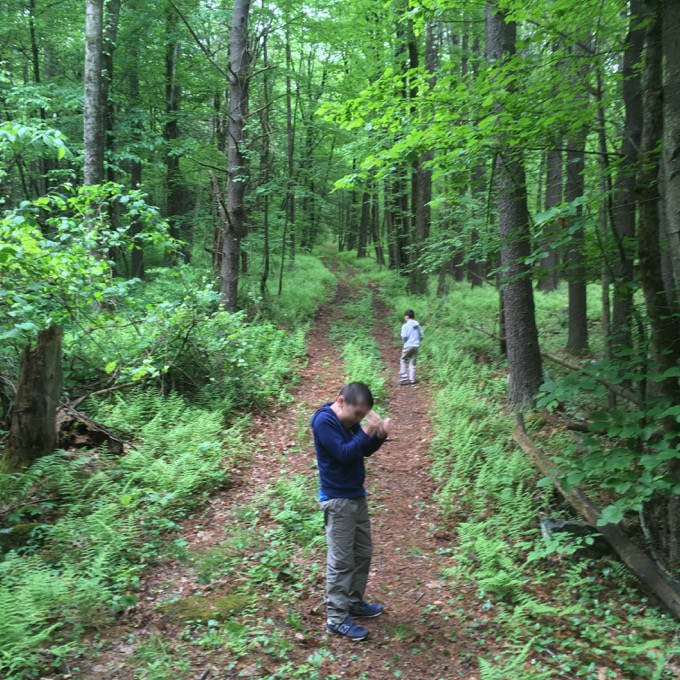 And the boys are starting to get that. Calvin especially. And that makes me proud. He also continues to amazingly ignore his brother’s unique and difficult special needs, which include an array of, um, distracting behaviors – often present at the outset of our hikes.

As we made our way from the trailhead off of Silver Road, just south of the Massachusetts border, Damian continued to scream and hit himself as we walked up the hill along the old woods road. 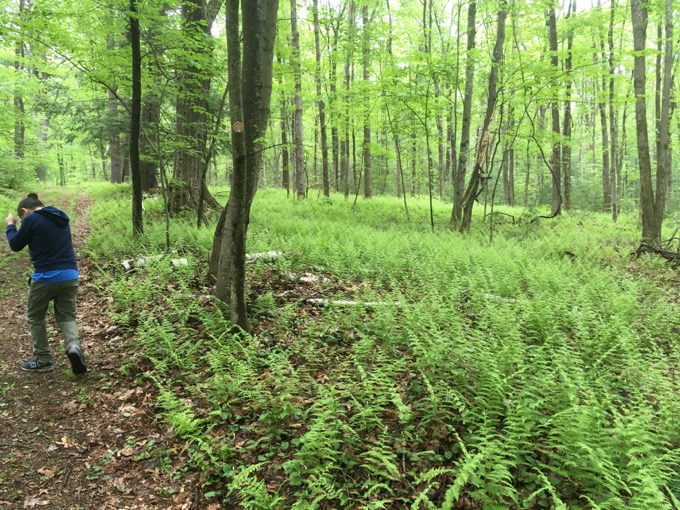 Yeah, that’s our life. Sigh. Damian got over it after a few minutes and we continued the climb. Once to the ridgeline, I thought there may be some eastward views, but there were none. That was fine, as the yellow-blazed trail took us though lots of mature pine and hemlock and gave the late May hike an almost sinister and chilly feel. 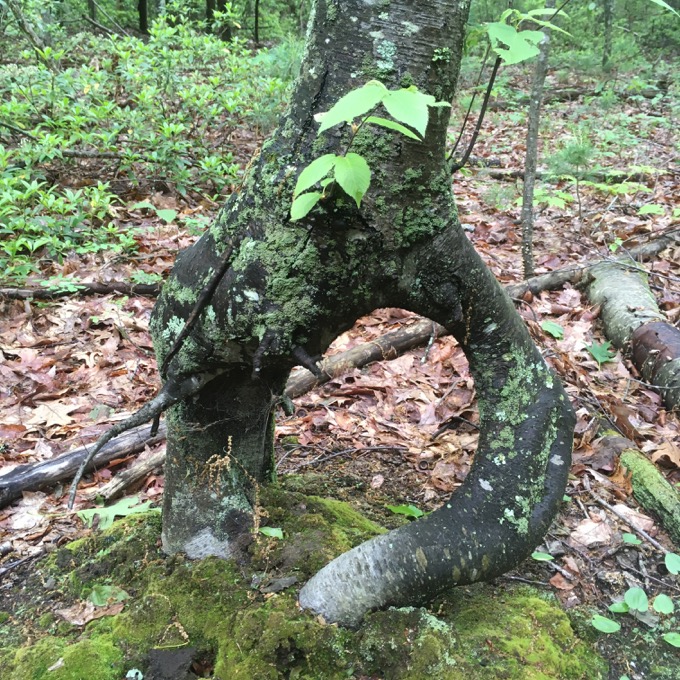 The hike afforded me the opportunity to continue Calvin’s map-reading education, as the contours here are quite striking. With the steep drop-off to the east, he was able to sort of figure out how the whole thing works. The mapped stone walls also provide some excellent beginning instruction. 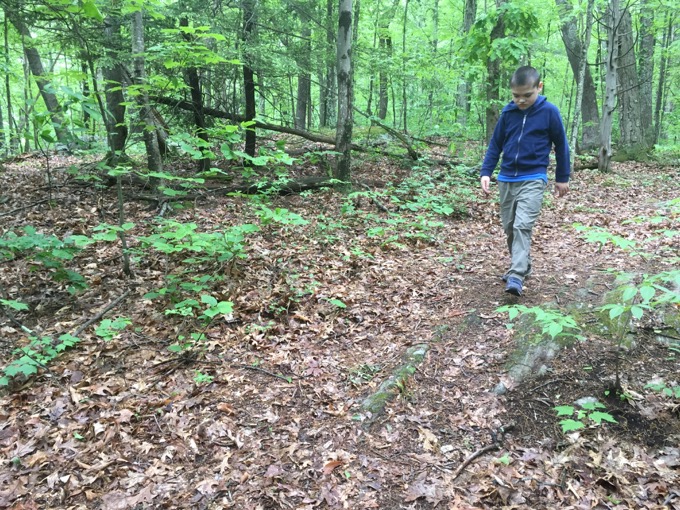 We reached a massive wolf tree in a slight clearing near a major trail intersection. Someone, somehow, lugged a picnic table out to this spot! Unfortunately, this left them too tired to clear the area of the forest of poison ivy that was running rampant. Perhaps that cleanup happened before CT Trails Day. 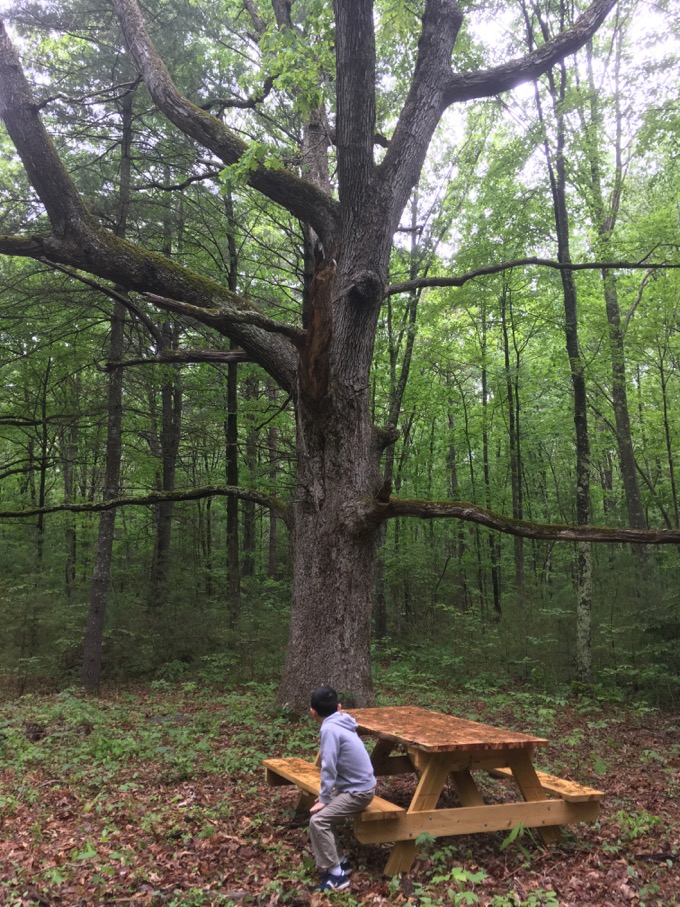 We ventured northward along the blue trail, which took us into a wetter section of the Preserve. As I was lost in thought, I heard a yelp from my young charge and once I backtracked 20-feet to reach him, I found him catching a little wood frog! 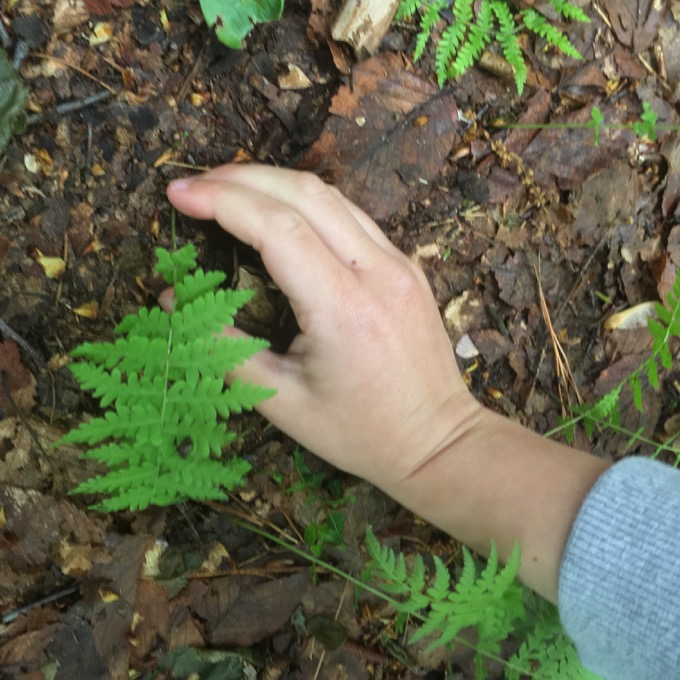 Awesome. Not only did he spot it, but he had the wherewithal to catch it and cradle it delicately. (Seriously, no one loves animals more than Calvin. He just spent 20 minutes out back before I wrote this allowing a praying mantis crawl up and down his arm as he just stared wistfully at it.) 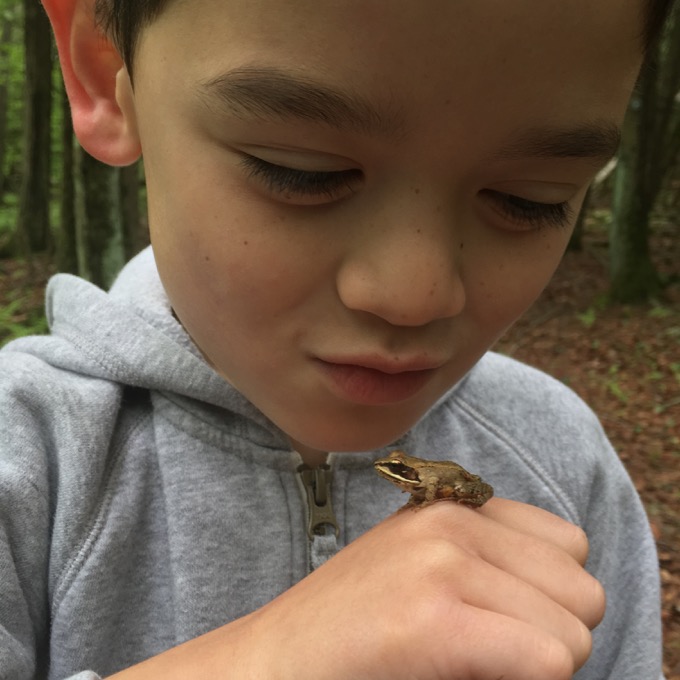 It’s pretty cool being a parent and seeing your child take such interest in something I took great interest in as a kid. He and Damian watched the frog’s throat bulge quickly and asked all the questions you’d want asked. Though I was a bit lost on “what’s his name?” 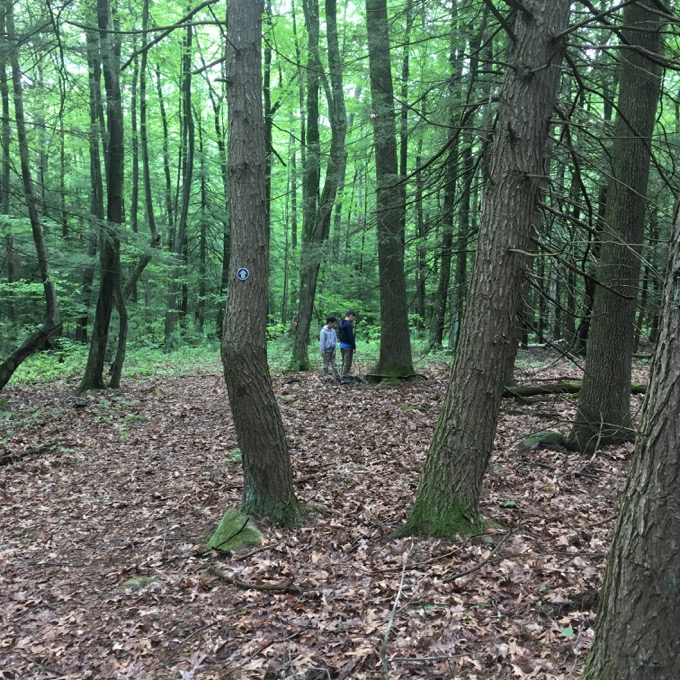 Calvin showed great concern that he was so small and may be lost and where’s his mama and how will he find her, etc. I love that stuff. (Of course, his wish to take him home sort of undid all that maternal concern, but he’s seven. I’ll give him a pass.) 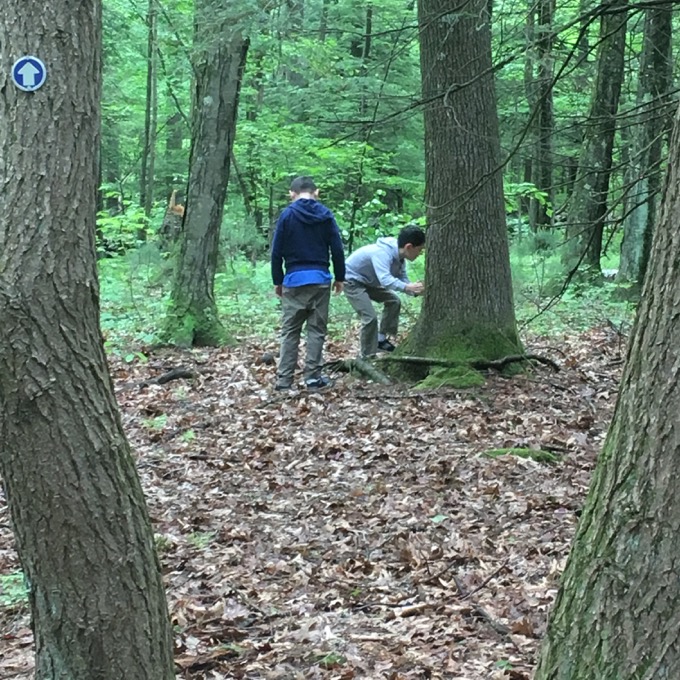 After he and Damian studied him, Calvin found a nice place to release him and my sons just squatted there and watched the frog figure things out before hopping off into the tall, dewy grass. Onward we walked. 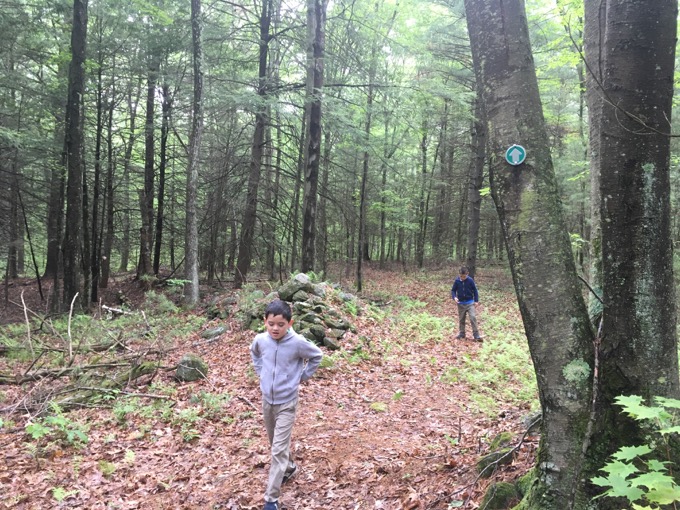 Onward to the green trail and the big field it brought us to. I suppose one could say this field afforded a bit of a view. But Calvin was still talking about his froggy. 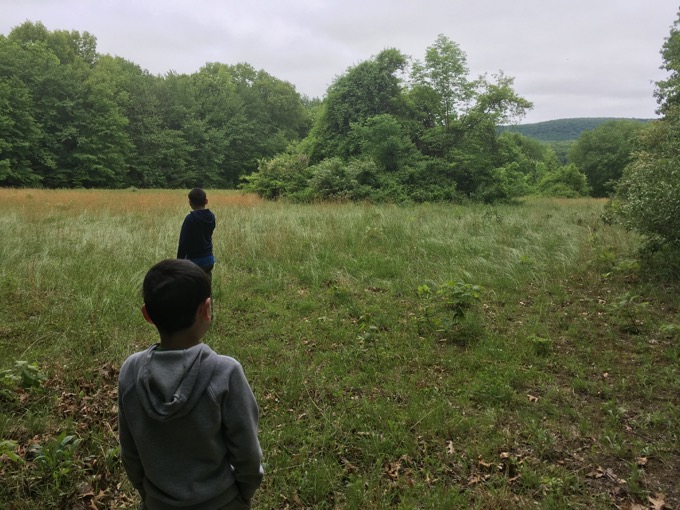 That quickly changed as we moved over to the orange trail and its path through some marshy areas. “Papa! Papa!” Calvin yelped again. Another frog? Nope, this time he’d found a red eft and it was love at first sight. 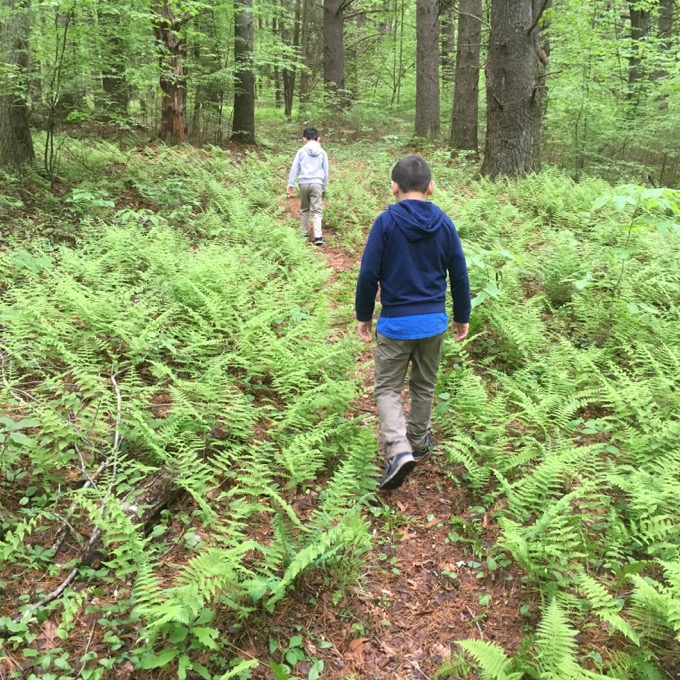 He doesn’t remember, of course, that it was also at a Granby Land Trust property three-and-a-half years prior that he held his first beautiful eft. Pretty cool, that. 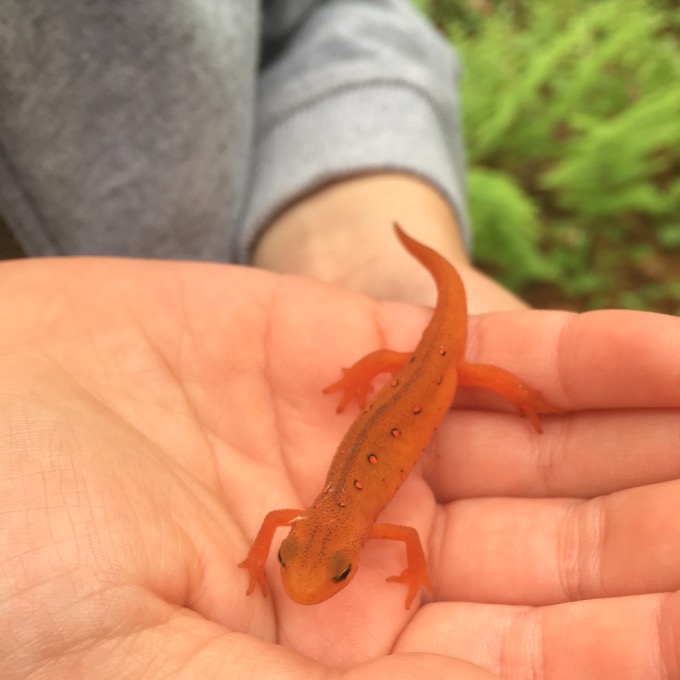 More questions followed his catch, and a deeper yearning to keep it. How does one keep a red eft? What does it eat? (And more immediately, how does one carefully carry it the remaining trek to the car and then safely transport it home?) 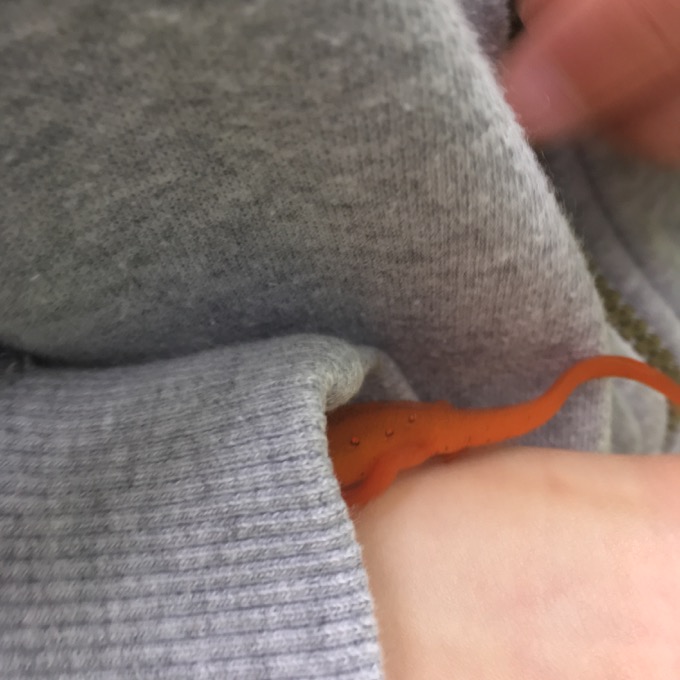 Calvin was adamant. He was bringing it home to show Hoang. Okay, don’t hurt him, and don’t let him fall. Calvin was over the moon.

Fortunately, we only had maybe 20 minutes to go to get back to the car. And now at least there was a sense of urgency to do so, and my two sons didn’t lolligag either. (It helped that it was mostly downhill too.) 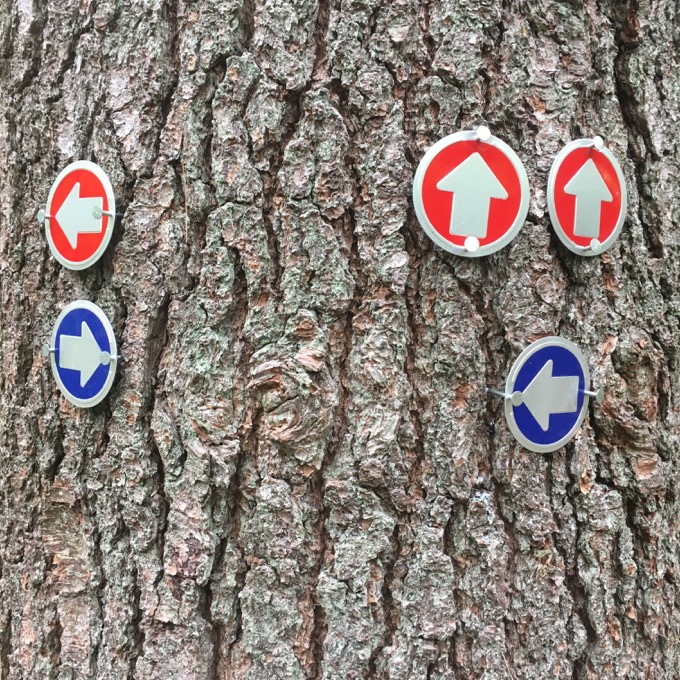 I found a plastic water bottle, cut off the top, put a bit of water in the bottom and plopped our new friend in for the ride home. Calvin held it and stared at it all the way.

And thus ended another wonderfully successful GLT hike. We kept the eft for a day, and I pretended that the little worms and bugs I found were to his liking. Calvin understood that amphibians are hard to care for, and he said his goodbye to the creature at a marsh near our house.

This is why we hike. 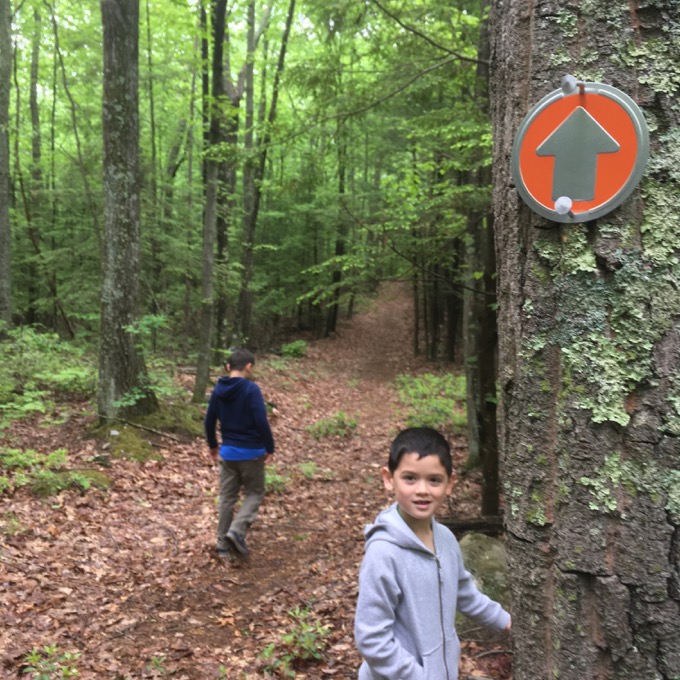