One quick thing off the bat here, before this page BLOWS YOUR MIND: There is a LOT to the story of this tribe; way more than I’ll get to, so follow some of the links. (I used to have a link to the tribe’s on site here, but it’s gone. So the Bridgeport Library’s will have to suffice. Even if they stole my photo. Ha.) 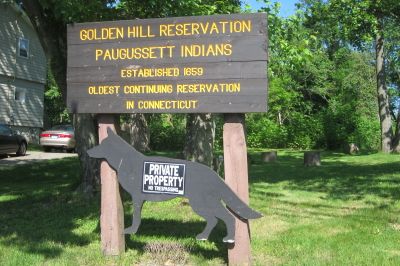 I’ll spare you a lot of the details, but I was alerted to this reservation situation by a resident of Virginia. Okay, not just any resident of Virginia, but my friend Tom who writes the indispensable Twelve-Mile Circle geography blog. We were planning our insane day of hitting every geographical extreme in the state (for charity) and he threw the Golden Hill Paugussett Nation in Trumbull out there.

Why? Oh, because it is apparently, at a quarter of an acre, THE SMALLEST RECOGNIZED INDIAN RESERVATION IN THE ENTIRE US. And that’s the type of thing I love.

And it’s also apparently the oldest continuing Indian reservation in Connecticut which is cool, but really not all that exciting.

Of course, having the smallest reservation has a flipside. And that’s that the Paugussetts used to “own” the entire western half of Connecticut. The Paugussetts have made various land claims over the years that have all been bigger than a quarter acre. Once, they famously laid claim to Bridgeport. That claim was denied, but I wonder how many now wish it wasn’t?

[Today, the Paugussetts do have a 106 acre reservation in Colchester which was purchased with Federal money for them, and 100 or so tribe members live there, but aside from the crazy cigarette scheme in Colchester, we’re going to focus on the Trumbull land.]

During our insane Extreme Geo-Tour 2012, for which the aforementioned Tom drove up from Virginia to participate in, we did drive to the reservation for a photo-op. But as chance would have it, the family/tribe were having some sort of gathering in their little yard at that very moment. Suffice it to say, 3 doofy white guys stopping and taking doofier pictures of their land just didn’t seem right. So we didn’t. After all, this place is only a couple minutes off of route 8 and I’d have plenty of future opportunities to take the two highly professional pictures you see here.)

These Paugussetts seem were very web-savvy, as they have had a well-written website chronicling their entire history and struggle for recognition. Picking up with their history after the English arrived and killed a bunch of natives via smallpox and via guns, the western CT land began to get encroached upon around 1638. 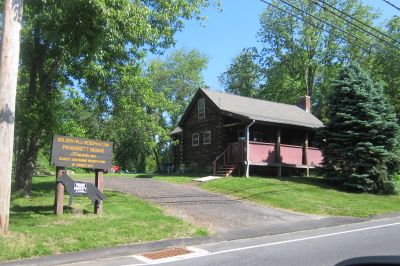 Within a few years after the first contact, the Paugussett had been divested by the colonists of the vast majority of their lands and left with several small reservations, including Golden Hill, site of a spring sacred to them and Turkey Hill. Golden Hill, by the way, is in Bridgeport today and Turkey Hill is in present-day Derby. (Golden Hill is right next to route 8 at exit 2, if you must know.)

In 1802, the state-appointed tribal overseer sold Golden Hill. The last of Turkey Hill was also sold by the state in 1826 for the people’s “own benefit”. Yay, “the people.”

After this all-too typical nonsense, a bunch of the Paugussetts moved to the south end of Bridgeport in an area that came to be known as “Little Liberia” or Ethiope. All non-whites were “colored” back then, and they intermarried and had kids and all that good stuff. Two houses still stands today, the Mary and Eliza Freeman Houses and it is on the CT Freedom Trail. I’ve been there.

I said I’d mention it, so here you are – in 1993 at the Colchester reservation, these guys decided to sell cigarettes without the heavy taxes. It turned into an armed standoff, but no one got hurt.

The tribe has been fighting for federal and state recognition, off an on, for many years. This has never really gotten any traction, for whatever (political, arbitrary) reason, but just recently now in 2013 the feds (and then state) may recognize the “other” three tribes in the state.

Other meaning the Golden Hill Paugussetts, the Schaghticokes and the Eastern Pequots, in addition to the two everyone knows: the Pequots and the Mohegans.

These plucky folks have also, like I’ve said, filed many bold land claims over the years. 700,000 acres of Bridgeport and Orange here, half of Shelton and Derby there. None of those claims have worked, of course, so they are stuck with this tiny little postage stamp “nation” or reservation at the very edge of Trumbull.

So from 700,000 acres of land down to 1/4 of an acre in just a few short decades. How did this happen? Fortunately for us, the tribe themselves break it down nicely:

In 1801, the settlers brought a petition seeking to take even the few remaining acres from the Tribe. Naturally, this was granted. The 1802 Public Records of Connecticut show that the testimony established that the Golden Hill Indians did not need the land since “the Indians earned a good living making baskets and brooms.” 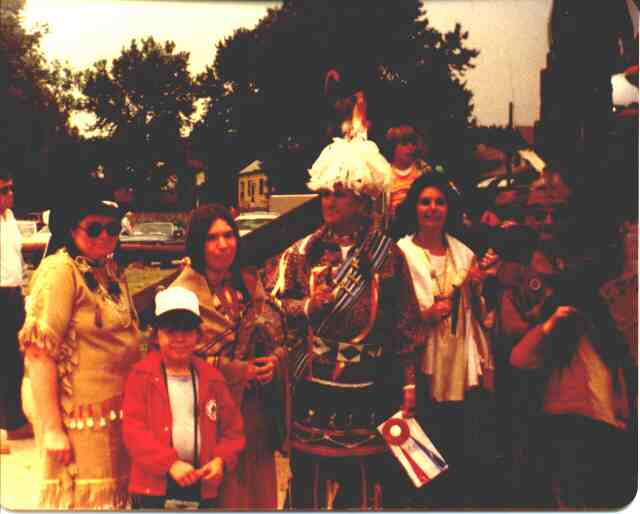 This and the next two pictures are from the tribe’s photo album, obviously

The pattern of stealing the land and money of the Indians shown in those early days continued into the future. During the 1800’s, all Indian tribes in Connecticut had “overseers.” The records clearly show that the overseers for Golden Hill bought and sold Tribal lands on a regular basis, but the Indians rarely seemed to get the money.

Despite all of the money which should have belonged to the Tribe, by 1841, there was only slightly over $ 1,000. In that year a 19 1/4 acre lot was purchased for the Tribe in Trumbull. By 1849, for reasons that are not clear, the overseer for the Tribe sold this property and, again, the Tribe was without a land base.

This continued for another generation. After a number of years as a seaman, William Sherman returned to his ancient Tribal territory in the early 1850’s and he became a day laborer in the Nichols section of Trumbull. From 1857 to 1877 he kept a daily diary showing the job which he performed. He literally saved his pennies for 25 years and in 1875 William Sherman purchased 1/4 acre in Trumbull, directly across the street from the 19 3/4 acre lot.

In 1886, William Sherman gave the title to the 1/4 acre to the overseer for the Tribe to be, held in trust for the Tribe forever. That 1/4 acre is the site of the Golden Hill. Reservation, which is the smallest Indian reservation in the United States and one of the oldest. This tiny reservation has been the home of the chief and the center of tribal affairs for over one hundred years.

You’d think the state and the town would be okay with this tribe owning what amounts to a backyard. Nope. 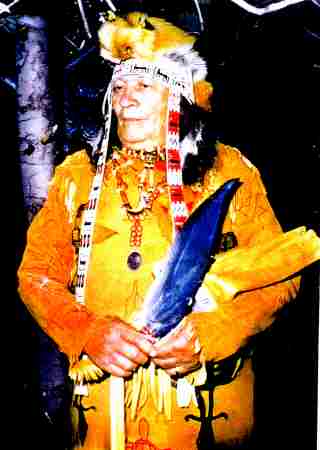 …In 1939 neighbors in Trumbull tried to terminate the reservation. The neighbors were stopped when the Attorney General of Connecticut wrote an opinion stating that the property was held as Tribal land for the Golden Hill Indians.

This opinion came about as a result of the efforts of his children, Chieftness Rising Star and her brother, Edward Sherman, Chief Black Hawk.

Chief Black Hawk moved onto the 1/4 acre reservation upon the death of his father and lived there until he died in 1974. At that time, Chief Big Eagle, Aurelius H. Piper, Sr. (here, right), son of Ethel Sherman, grandson of George Sherman and great grandson of William Sherman, moved onto the 1/4 acre which had been purchased one hundred years earlier.

Of course, the attempts to take Tribal land continued. In 1975, the State wanted to demolish the house on the reservation and relocate the Chief, but Big Eagle refused to leave. If he had moved the reservation could have been terminated, but Chief Big Eagle said that he would never “sell his ancestors down the river.”

In 1976 a neighbor claimed that he owned part of the 1/4 acre. After a lengthy and tense confrontation, which included a fire on the reservation started by an arsonist, Chief Big Eagle again protected the tiny piece of land. 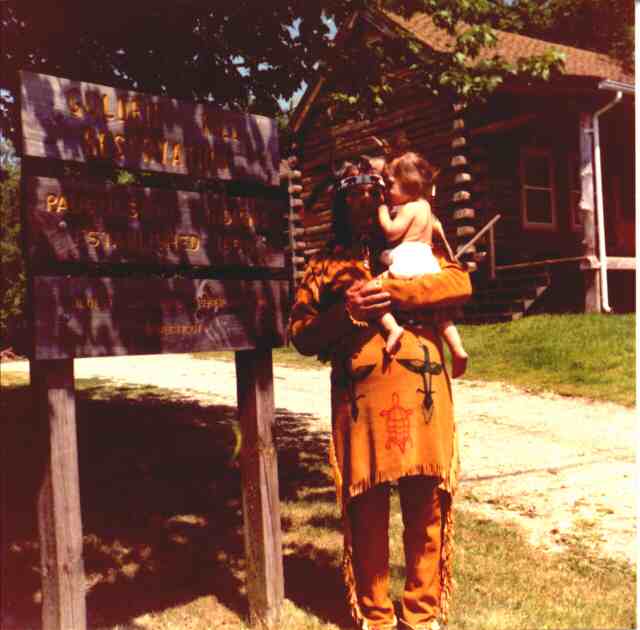 I love that the reservation has such a large sign on their property. I love that they’ve fought for this parcel and will (apparently) continue to do so in the face of so many pressures over the last 250 years. And I can’t believe someone tried to claim part of their quarter-flippin-acre.