I Wonder What Gryphon Milk is Like
Griffin Farmstead, East Granby
June 4, 2011

Talk about confusing. The one thing I’m sure of is that this place is indeed called Griffin Farmstead. And I know the retail area is on Copper Hill Road across from the Griffin Road intersection. And I assume that Griffin Road is named after the farming family, since they’ve been at it for over a century. 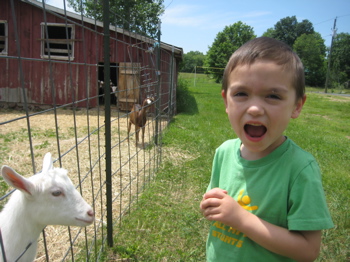 The pure joy of goats

Our farm history dates back to the early 1900’s when Allen Griffin started a dairy on this land. Relatives of my husband and his family, Pearl and Howard Griffin, farmed here until Howard’s death in 1992. The dairy sat idle until 2007 when we started the Griffin Farmstead Goat Dairy.

Our love for goats started when we began breeding Nigerian Dwarf goats and has grown into a fondness for all breeds. We are now 1 of 4 licensed goat dairies in CT. On our dairy you will find Nubian, Saanen, and Alpine breeds. Currently we have 30 goats in milk, 6 doelings (young girls), and 4 bucks. We milk seasonal to give our girls and ourselves a break, therefore there is no liquid milk available for sale during the months of December – March. 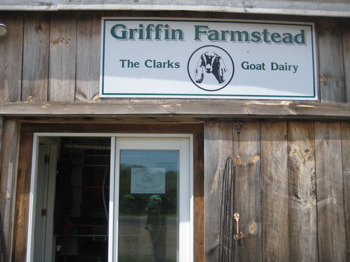 That’s great, but the mix of other (non-Griffin) names and labels and signs left me a bit confused. Butterfield goat yogurt, the Clark family… But whatever, I was here for their chevre and after a couple failed drive-by’s in the past, Damian and I finally got what we came for.

If you plan on stopping by, just be sure you know where you’re going. The milking and processing operation across the street looks more inviting than the small building where the goods are sold. Though the day we stopped, there were a few produce items out front for sale as well. 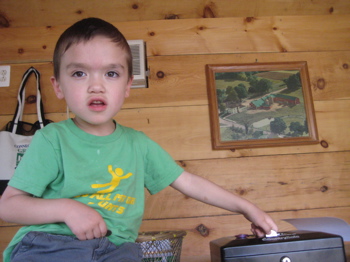 Also, please be sure you have a bunch of singles in your pocket too. This appears to mainly be an honor-system business and at the time of my visit in 2011, it is clear that they are being ripped off by jerks. If they continue to get ripped off by jerks, they will cease selling their stuff “on the farm,” and then we all lose. (Note: they also sell their products at local farmer’s markets and stores but still, I much prefer the charm of buying super-direct.) 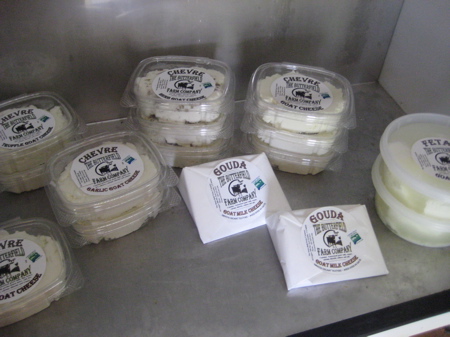 And besides, what little kid doesn’t like shoving money into a slot? What? Only my kid? Oh well, whatever works.

The Griffins had a few varieties of goat cheeses for sale when I stopped by, as well as some goat’s milk yogurt. The usual suspects were on sale but they make a variety I’d never seen before: Truffle. 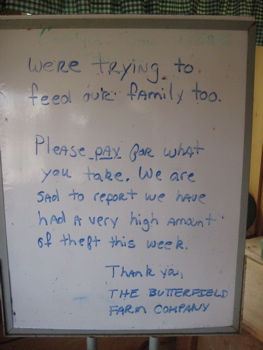 Which, of course, is the one I bought. Even better, Hoang was nursing at the time and since the new rules of nursing disallow the enjoyment of any and all things delicious and sustaining, this tub of truffle goat cheese was all mine. ALLLL MINE… mwuh-huh-huhhhh.

Griffin also weighs in on the raw milk debate that rages among farmers here in Connecticut (a kid died from raw milk a little while ago and the state banned its sale in stores) but also makes the point that they don’t use “animal product” rennet. However, since the vegans who care about that also don’t drink mammal milk, I’m not sure why that matters. It’s all so confusing. 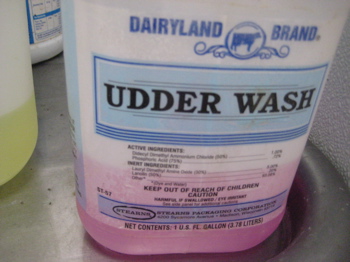 Our cheese is made right here on the farm after the milk is pasteurized. We do not have a raw milk license nor will we get one, we believe in pasteurization. We use vegetable rennet (instead of an animal product) in all our cheeses.

As per usual, there was a little pen of friendly goats outside that Damian enjoyed for a little while. We also crossed the road and poked around the guts of the operation but quite honestly, there was nothing much to see there. 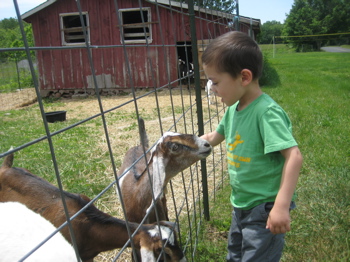 So we went home and I ate a bunch of truffle cheese. The truffle flavor wasn’t very strong at all, but it was certainly discernible – and it was really very good. I wonder… How many people think it’s chocolate truffle flavored cheese?

2021 Update: The owners have purchased Bushy Hill Orchards in Granby and run Clark Farms in Suffield now, hence some of the confusion. 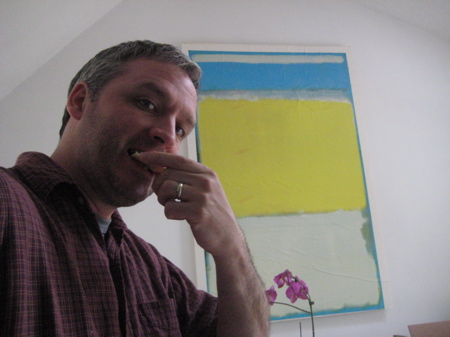