You Can Take the Boy Out of Wall Street…
Half Full Brewery, Stamford
February 2020

My “relationship” with Half Full is a funny one. Until I visited, it was by far, the longest-tenured operational brewery in Connecticut that I had never visited. It took me about eight years to finally check the place out in person. This was mostly because Half Full is in Stamford which isn’t exactly in my backyard. I had planned to and/or attempted to visit several times over the years but somehow, something always came up. 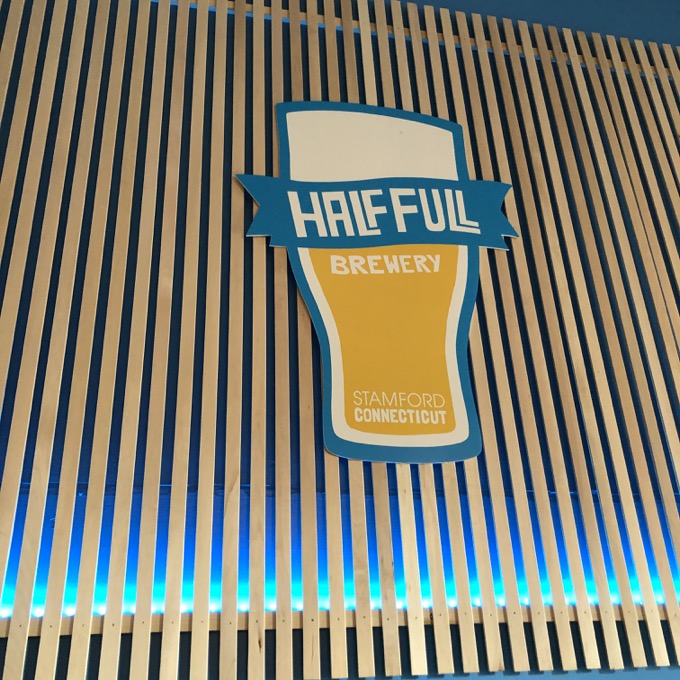 We praise the determined adventurers who know what’s possible when you relentlessly pursue it.

Okay? Cool? Where did that pull-quote come from? That was weird… anyway, yeah, I was determined to adventure to Stamford to check out Half Full in person. They’ve always been situated in the same tight mostly underground space in the city’s Waterside industrial district.

I’d been to Stamford probably a dozen times over those eight years – and had been through it dozens more – but never found myself at the brewery. I’d been familiar with Half Full’s distributed line-up, however, as they’d been distributing to Hartford Country since very early in their existence. For several years, I found their core line perfectly… fine. Standard, decent stuff.

We celebrate the risk takers, the dream makers, and the “who says we can’t sayers”.

What the? Who is saying this stuff? It’s all very inspirational and all, but I’m writing about a little brewery, not corporate sloganeering. I can’t pretend to be a risk taker – at least not since my wife and I had our first child and – hey, waaaait a minute… 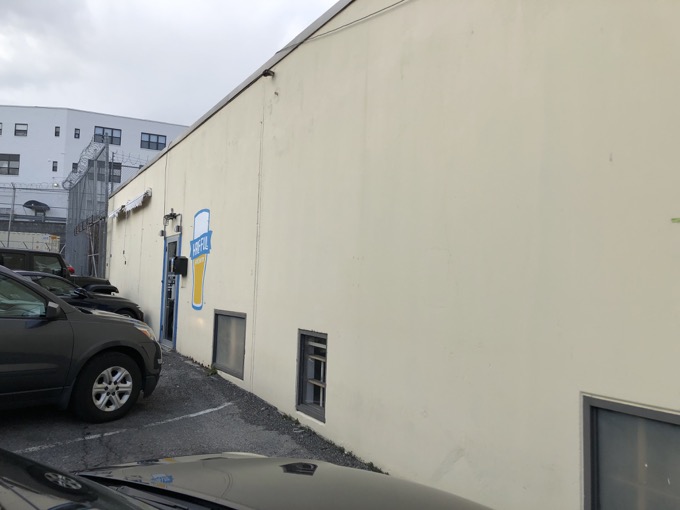 My oldest son Damian’s Smith-Magenis Syndrome makes it very, very difficult to take him anywhere with any sense of normalcy. His aggression, self-injury, and general all-around difficulties can be quite a handful. But there I was with him, down in Stamford on a February Saturday… taking him to a small underground brewery for some reason. Oh yeah… I am a risk taker! Woo-hoo! Things would be fine, right?

I had stopped dragging either of my sons to breweries years prior. But I had to make an exception. If all goes well, I can survive a relatively quick tasting visit with Damian. He can be somewhat fun sometimes, right? I won’t let his disabilities keep me from realizing my dream of visiting every brewery in the state! I just won’t… I just can’t…

We value the tireless difference-makers who recognize that together we can make the world a better place, one beer, and one conversation at a time. 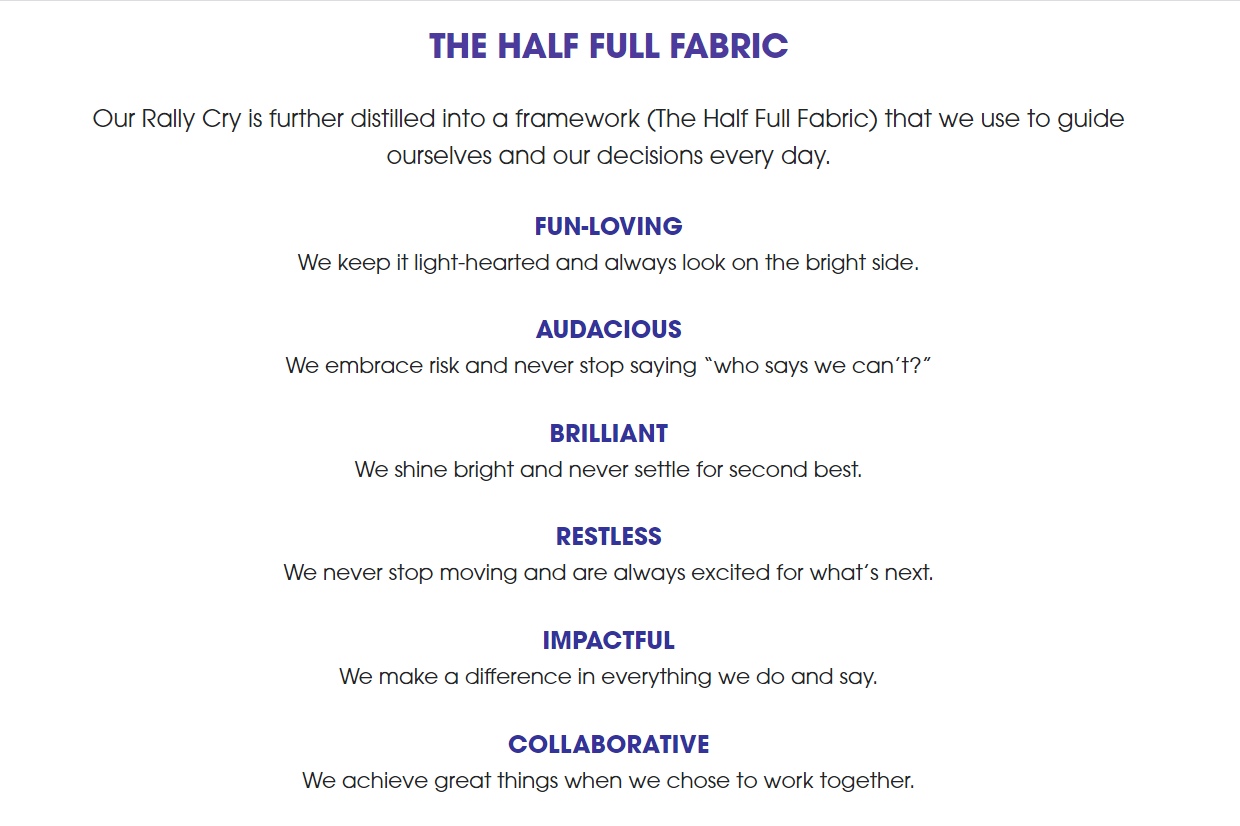 Cripes. You mean to tell me that all those quote above are from the Half Full website? And Half Full really is just a little brewery and not trying to sell me on Amway or Primerica? Eesh.

Half Full was founded by Conor Horrigan who is, by all accounts, just a really good dude. If you have listened to any local podcast in the last eight years, you’ve heard his story: He grew bored and disillusioned at his fancy Wall Street job after a few years of it and quit. He and his wife went on a months-long vacation in Europe as all recently unemployed people are wont to do. On a train ride to Prague, he had a vision. 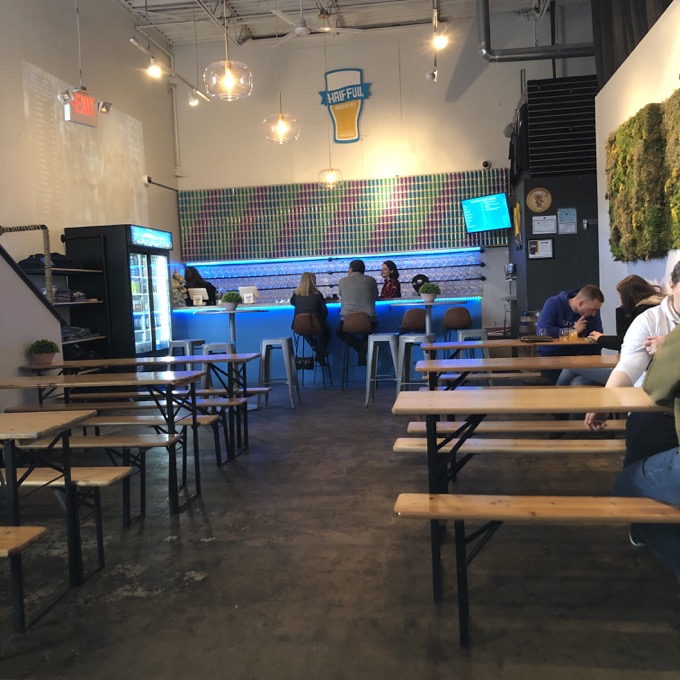 He would start a brewery and it would focus on the bright side of things and be a positive force in the community and it would be guided by cat poster aphorisms cribbed from his days in the corporate world!

Upon returning to the states, Horrigan got his MBA from UConn, during which he wrote up his Half Full Business plan. He sought out and secured investors, and was fortunate to be able to apprentice under Rob Leonard at New England Brewing. And in 2012, Half Full was born. Horrigan was now “Chief Hoptimist” at the brewery.

He hired his first head brewer. And she was a she! This was not a thing in 2012, so shout out to Horrigan and Jennifer Muckerman. She plied her trade for a while before leaving with another Half Full brewer named Andrew Porter, and – hold on. I’ll let her tell it:

Muck went on to brew in a lot of systems in a few different states and spent some time as the head brewer at Half Full Brewery in Connecticut, but as a Missouri native, decided that life in the Northeast wasn’t for her. Luckily, a job opening for a new brewery called JBGB caught her eye and she decided to check out Arkansas which took her by surprise. “When I got off the plane for the interview I knew I had to get this job,” Muck said. “I just love the area!” 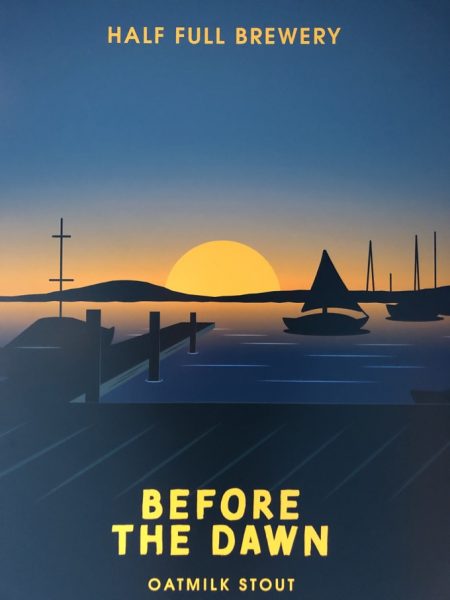 That is just not something you read every day about Arkansas. Nor is this:

When they’re not drinking the brews they’ve created, Muck and Porter can both be found with a Bud Light. They’re true American light lager fans because of the light flavor that cleans the pallet and allows for easy drinkability.

Argh. ANOTHER brewery with the “pallet/palate” thing wrong. Anyway, goodbye Bud Light fans (but props to them for putting that out there I guess… or is it just weak-sauce pandering to Arkansans?) and hello new team in Stamford.

Today, our mission is to lead and inspire ideas & community through purpose driven products, places & experiences, and our vision is to be the #1 reason people want to live in, work in, & help to build a better Stamford.

Why do I get the sense that Horrigan talks like this in real life? None of this stuff is bad, per se, but it becomes a little silly when you step back and really take a look at it. Stamford is a vibrant and growing city within the sphere of the greatest city in the world. No one, in the existence of humanity, is moving to Stamford for a little brewery. 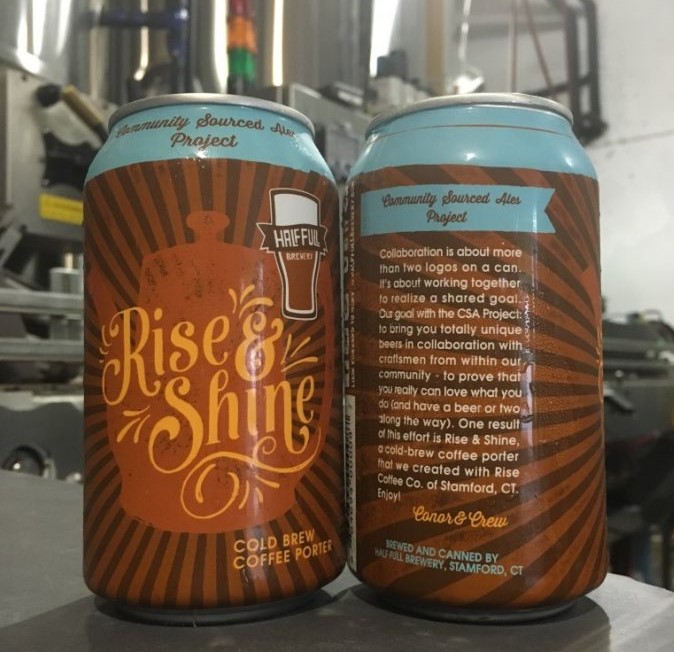 But that’s not to say Half Full isn’t a decent little brewery, for it is. Back in the old timey days of a dozen or so breweries, Half Full was, to non-lower Fairfield County folk anyway, just kinda “down there” making a rather staid line-up of standard styles.

Granted, that’s what most breweries were doing in the 2012-2013 era. Hooker, Back East, Thimble… ambers, blondes, porters, stouts, actual IPAs and the like. Half Full’s flagship was and is the Bright Ale; essentially a sort of hybrid blond-pale ale that is always a good go-to to give your Bud Light loving Arkansan uncle as an example of a similar beer with much more flavor and body.

Since those early days of standard styles, Half Full has expanded their portfolio. (Well, I sure hope so considering where the industry has gone since then.) Their early toe dips into the world of DIPAs and NEIPAs were tepid at best. But fortunately for them, they had some room for misfires as they were the only lower Fairfield County brewery for a long time. They had their territory, including the Long Island Ferry(!), and they had their loyal, local fans. 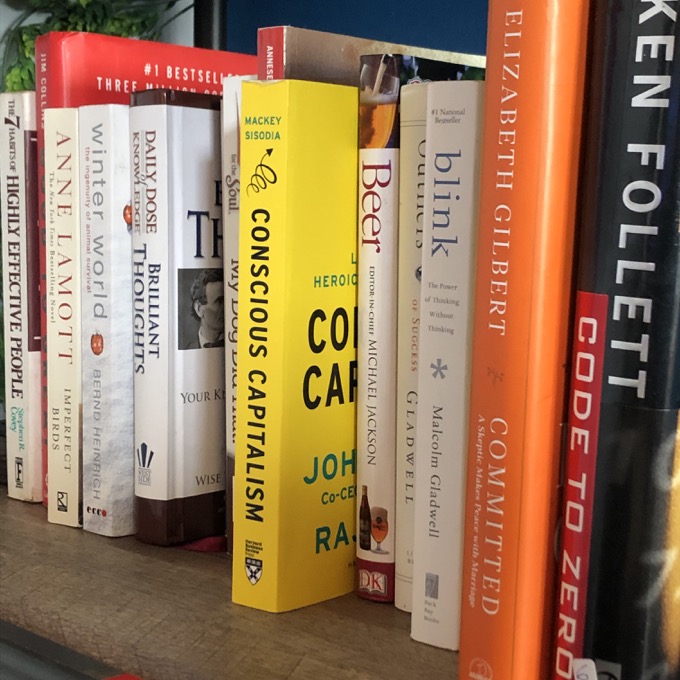 LOL. Of course the bookshelf here has The 7 Habits of Highly Effective People®

Those fans were cultivated by Half Full’s commitment to the area. They’ve done winter beer gardens in partnership with non-profit organizations, they’ve collaborated with local apiaries and coffee roasters for beers. As corny as some of it is, it’s clear that Horrigan and Half Full do try to live their credo as much as possible.

As I’ve mentioned, the space itself is quite small, but it’s really very nice. They’ve worked wonders with the somewhat limited natural light, including a lot of live plants – and live plant looking things. I love the splashes of color and the large-scale installations that honestly reminded me of some of those tiny underground secret handshake bars in Manhattan.

But the beers here are affordable. Around a dozen were on tap and I chose my four tasters: Bright with lime, Some IPA or another, Ascend NEIPA, and Before the Dawn, an “oatmilk” stout. 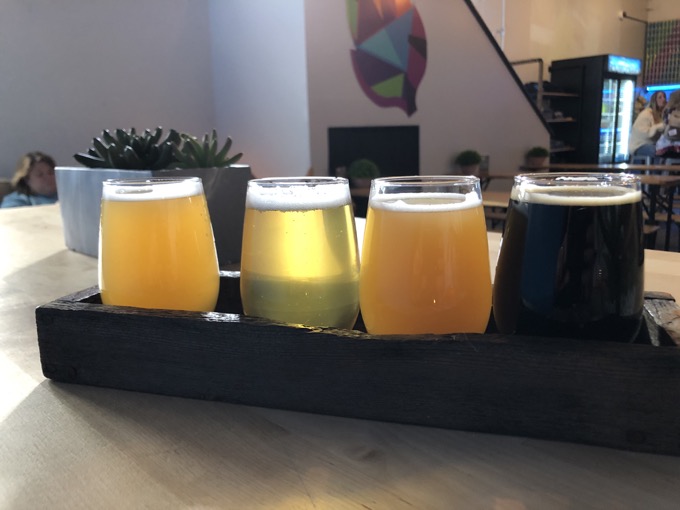 The first was… Bright. With lime. The IPA was a standard, decent IPA. Ascend was true to NEIPA style and very pineappley. Since every brewery makes a billion NEIPAs now, to pretend one is different from the next is silly. Even Half Full, a brewery literally never mentioned in the pantheon of Connecticut NEIPA makers, makes, cans, and sells dozens of these things.

The stout was also well made. I appreciate breweries that still put out the standard hits no matter how much market forces force them to dabble in other styles. (Although I don’t think they brew their amber anymore, but who does?)

I certainly can’t question the brewery’s success. They’ve gotten good press from the New York Times to CNBC who once showed up on location to do a story on the budding craft beer industry. The latter piece included this:

Whoa. Perhaps that’s why they’re expanding by opening “The Third Place” in 2020. Also in Stamford, this new space is kind of like one of those “teen hangouts” with live music, poetry jams, board games, open mics, food trucks, locally roasted coffee… with beer being the only thing different from what I can tell.

Half Full Brewery: A small brewery with big ideals. Led by a Wall Street refugee who hates Wall Street. Incorporates corporate jargon everywhere, yet tries to maintain anti-corporate street cred. A place where even a half full parking lot is a full-on exercise in frustration.

I chalked up the difficult parking situation as another subtle nod to lower Manhattan, smiled a half smile, and promised to visit Half Full before another eight years pass. 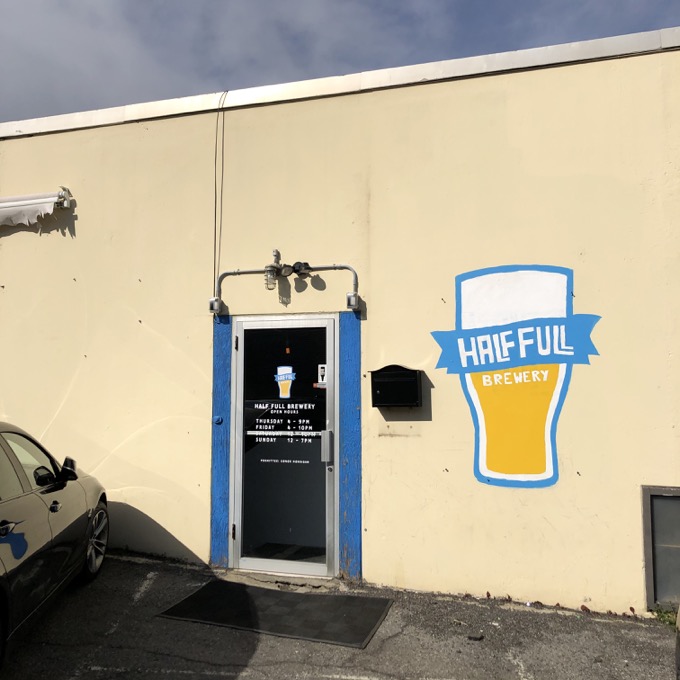