How About No Hands, Onefoot?
Hartford’s South Meadows
June 3, 2009 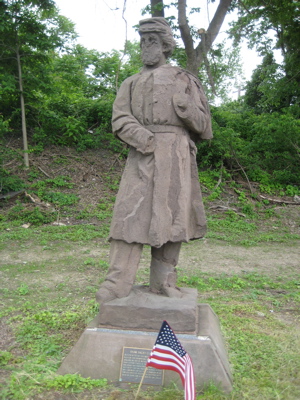 I’ve seen a few unique statues around the state, but this is the one that prompted me to create a little separate section for them on CTMQ. i don’t know why, really, as every state east of the Mississippi surely has some sort of Civil War monuments sprinkled around. I think it’s the weirdness of this guy – the name of the statue and perhaps where he stands today.

He’s sort of a metaphor for my entire “quest.” There he stands, randomly plunked down almost underneath I-91 alongside a marble artisan’s storefront parking lot, next to Airport Road in Hartford’s South Meadows industrial area. Thousands of people pass by him every day and I’d wager less than a tenth of a percent have ever noticed him, let alone checked him out.

And then there’s me.

This statue of a Union soldier was a reject because the sculptor made the mistake of putting the soldier’s right foot forward instead of the left at parade rest, as was then required by military regulations. Hartford, home to many rejects to this very day, didn’t seem bothered by this affront and plopped him down in the middle of the city at the corner of Charter Oak Avenue and Union Street in 1895. 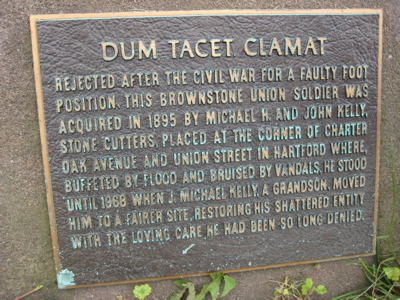 It means “Though silent, he speaks”

Turns out, placing a brownstone statue there was not the smartest idea as it was constantly flooded by the Connecticut River – heck, Union Street no longer exists! (My guess it disappeared in favor of I-91 and was very near the river.) Vandals messed with him and he basically fell apart. He lost his feet, his hands, his rifle and his face. That had to hurt.

But what about the name? During the Civil War, the drill sergeants repeatedly found that among the raw recruits there were men so abysmally untaught that they did not know left from right, and hence could not step off on the left foot as all soldiers should. To teach these lads how to march, the sergeants would tie a wisp of hay to the left foot and a wisp of straw to the right; then, setting the men to march, they would chant, “Hay-foot, straw-foot, hay-foot, straw-foot!” and so on, until everybody had caught on. A common name for a green recruit in those days was “strawfoot.”

Before you laugh at their ignorance – what teenager these days knows the difference between straw and hay?

Years of this abuse passed until 1968 when the sculptor’s grandson was able to move him to a “fairer site” according to the attendant plaque. Wow, he must really have been in a terrible place, because as anyone familiar with Airport Road can tell you, the nearby Sunset Leathers and VIP Adult boutique are hardly fitting for a Union soldier.

Eh, I guess he has no face to see his surroundings. 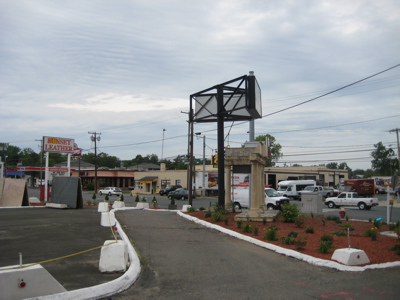