If you are reading my thru-hike of the Hockanum River Trail in order (generally south to north), you have already read the Meadow Hill Trail page. If you haven’t, it’s a fun one and you should. Better yet, start at the beginning with the HRT introduction and catch up.

I have done a lot of hiking in Connecticut. A lot. In fact, I would guess I’ve hiked more trails in the state than 99.99% of all humans. I’m saying this not to brag, but to give some relevance and credence to my next statement: This short little section of the Hockanum River Trail is one of the most amazing half miles of trail in the entire state. Furthermore, this half-mile is merely an introduction to what follows as the trail courses north into Manchester. 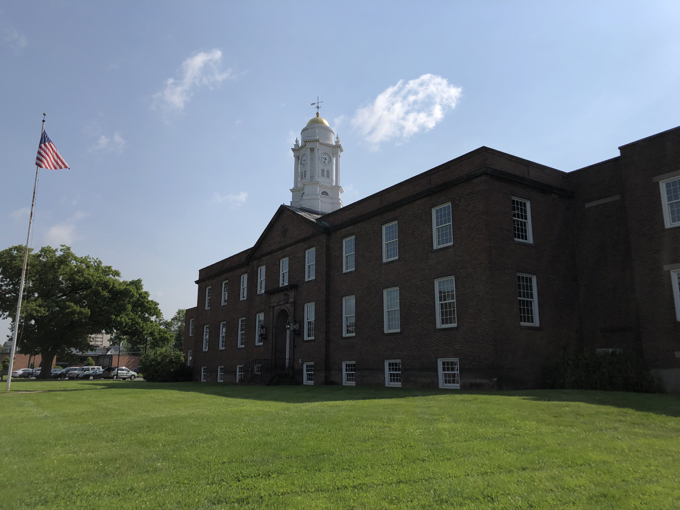 As my title above says, I was gobsmacked. After traveling to London far too often for work, I’ve picked up several Britishisms, and “gobsmacked” is one of my favorites. (If you’re unfamiliar, it’s simply a cooler way of saying “utterly astonished; astounded.”) 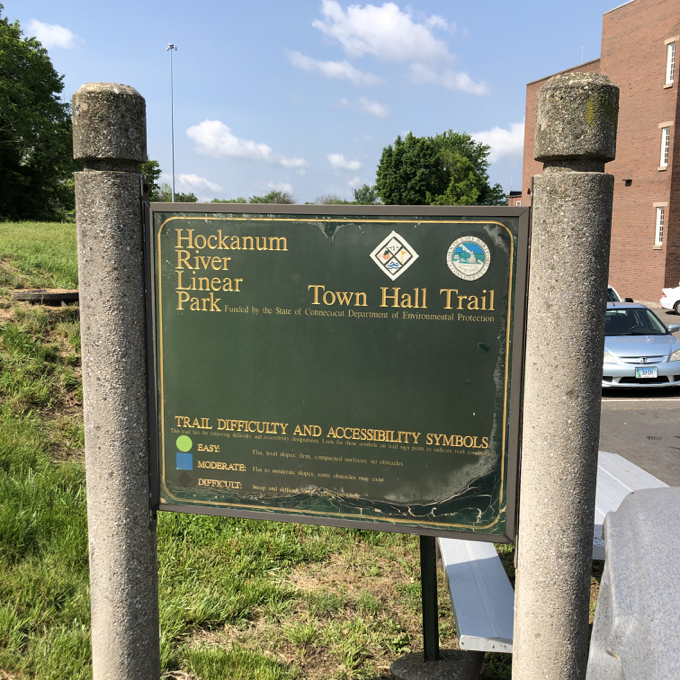 But goshdarnit if I don’t love everyone involved in that decision. Equaled only by my love for those hardy and handy folks who moved that plan on paper forward into the crazy reality that we’re able to enjoy today.

Note that I care not a whit that frost heaving, vandals, and floods have taken a toll here. I’m enamored with the people who thought this massive undertaking would survive those floods, vandals, and frost heaves. The number of volunteer (I’m assuming) hours – for a half mile must have been extraordinary. 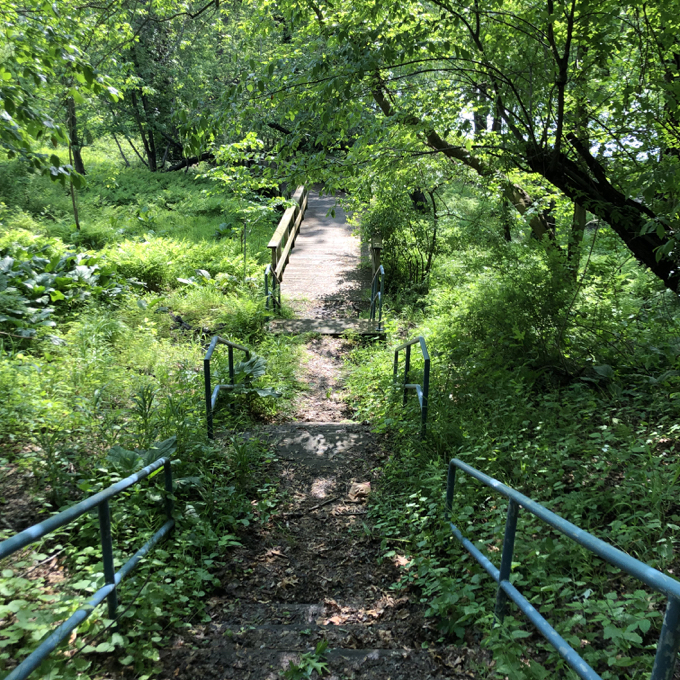 Let’s get going already… A short little road walk up East Hartford’s North Main Street is required to connect from the previous Meadow Hill section. Under I-84, behind Town Hall, and up the earthen dike to the HRT.

As the trail approaches some WWII era apartment buildings, it abruptly turns right and down some dilapidated stairs. In what would become a theme, I nearly slipped and fell on the mossy, slimy stairs. Welcome to the Town Hall section of the HRT! 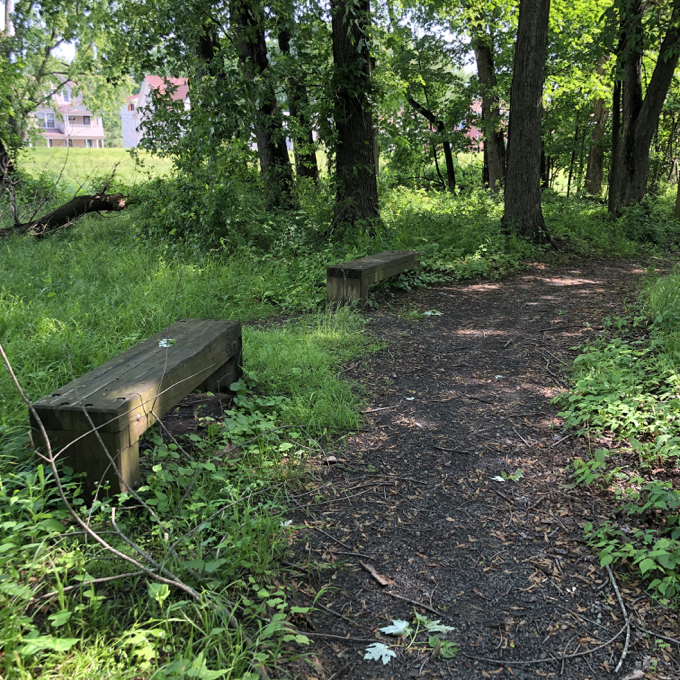 This trail segment starts by going up a short flight of steps, and follows the earthen dike to the left, and then goes down another flight of steps to an elevated boardwalk. This boardwalk goes along the north side of East Hartford Lake, and provides panoramic views of the lake on the right, Interstate-84 in the distance, and woodland-wetland on the left.

This is all true, but hold on a second. I always like to point out the Hockanum River Watershed Association’s honesty in their descriptions. “views of I-84 in the distance” is a good example of that. But… “East Hartford Lake?” Did you know there was such a thing? It sounds so quaint, doesn’t it? 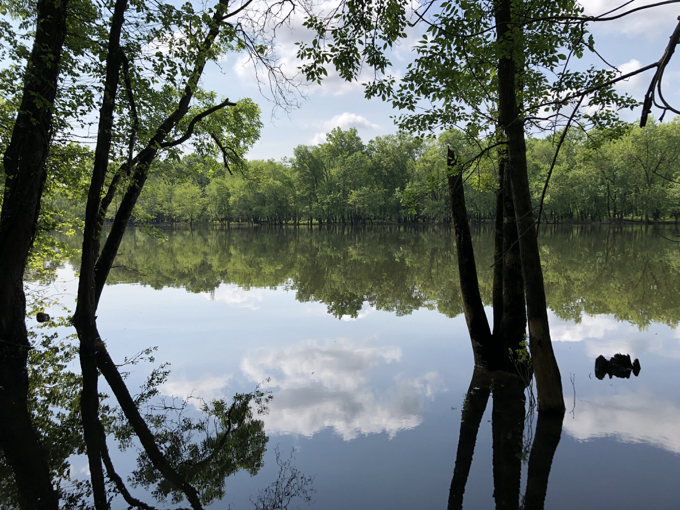 It’s merely the result of those earthen dams and dikes I’d been traversing to control the river’s flow before the sewage treatment plant I skirted during my last section’s hike. Anyway, the wildest thing in that paragraph is the nonchalance with which they mention the “elevated boardwalk.” 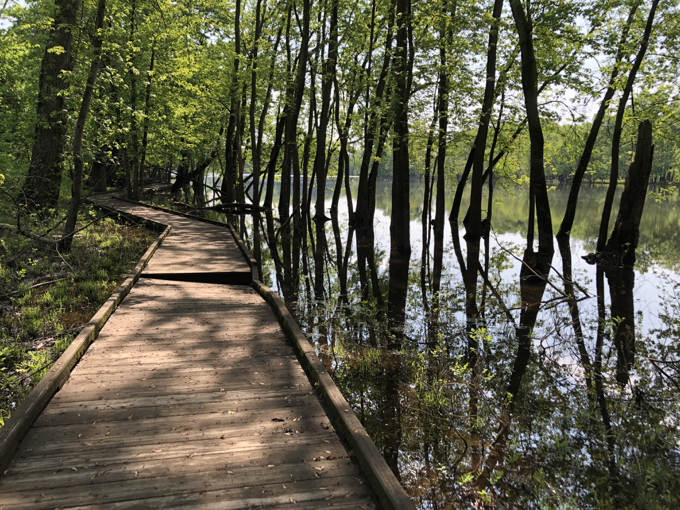 Because (spoiler alert), the next several miles of the Hock are on elevated boardwalk! Like, real deal boardwalk. Thousands of thousands of dollars worth of pressure-treated wood. Like I said, gobsmacked. I am being serious when I say that there is as much true boardwalk trail in East Hartford and Manchester along the HRT than there is in the rest of Connecticut. 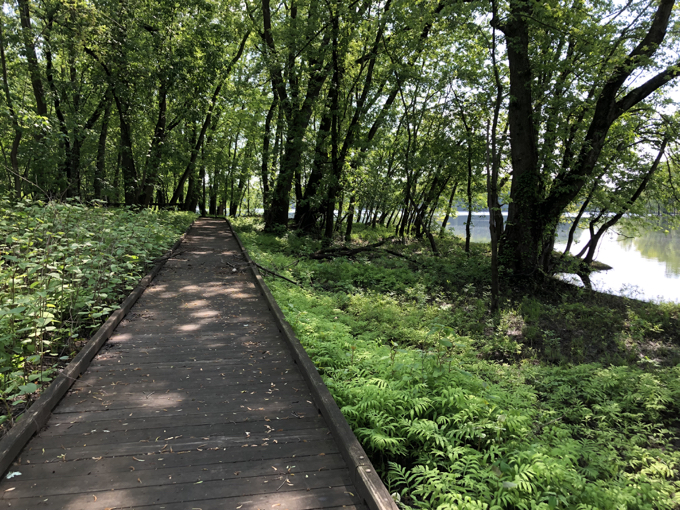 I know you don’t believe me, and that’s fine. But I stand by that statement.

The problem with this becomes the maintenance of it all. Like this will happen: 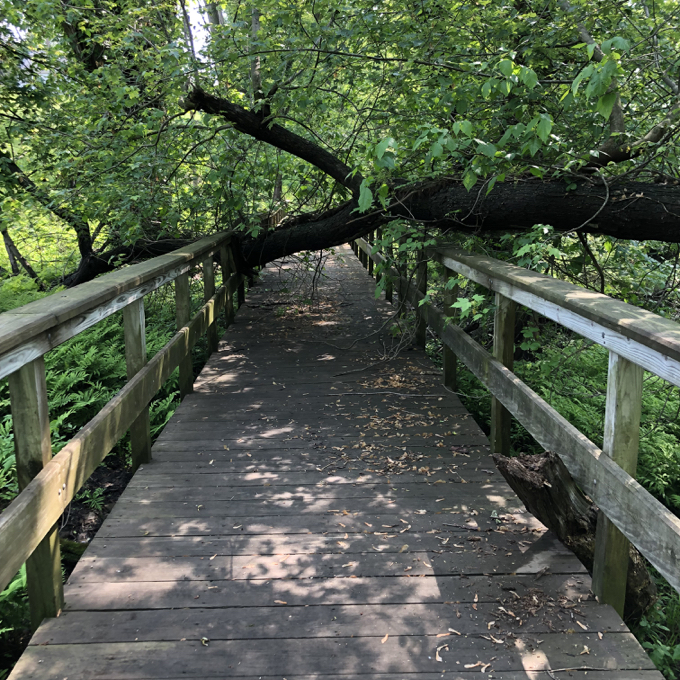 While I viewed this tree as a mere obstacle easily overcome, I could see that some might be turned off. Again, the incredible slickness of the walkway was far more difficult to deal with and slowed me down more than any ol’ fallen tree.

I mean, it’s just a tree to duck under. It’s not like I’d face any more difficult adversity here on this amazing elevated pathway along beautiful East Hartford Lake, and – 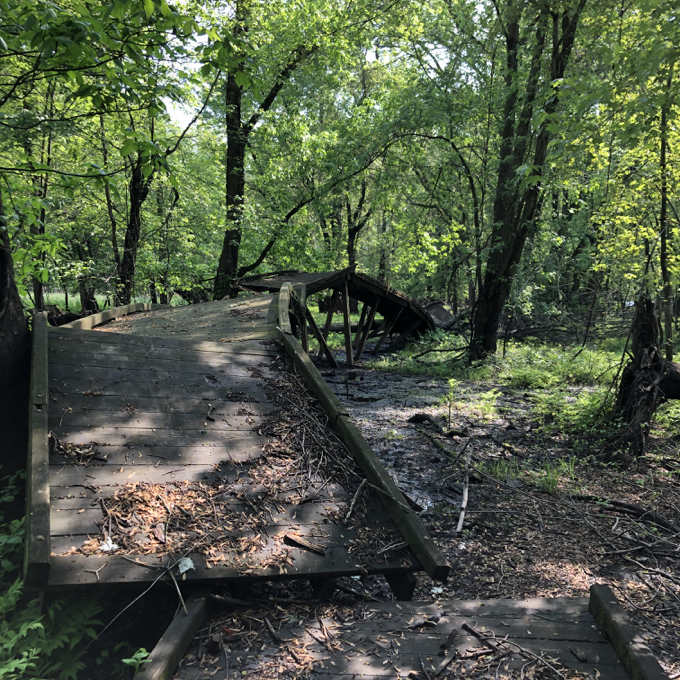 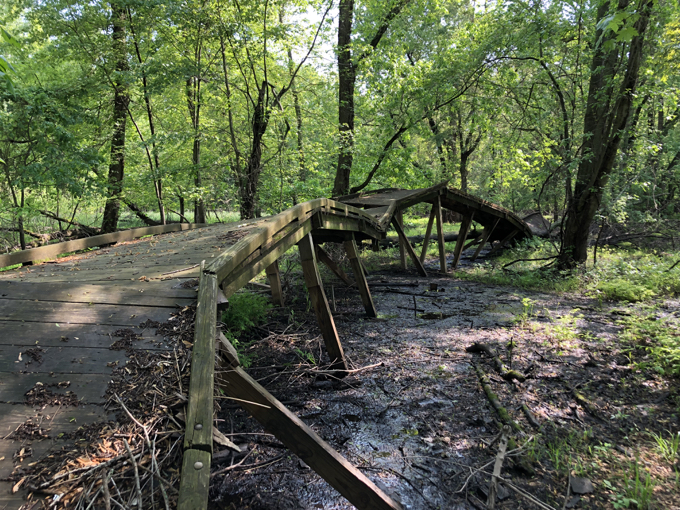 Oh. Well, that’ll happen. I imagine that several cycles of freezing and thawing in this wetland area kept pushing the supports up and twisting the structure. But look at that thing! It still blows my mind.

I’ve no clue if there are plans to fix that beast, but if you come here during relative dryness, you can easily continue on the other side. I did; here’s looking back at that fun obstacle: 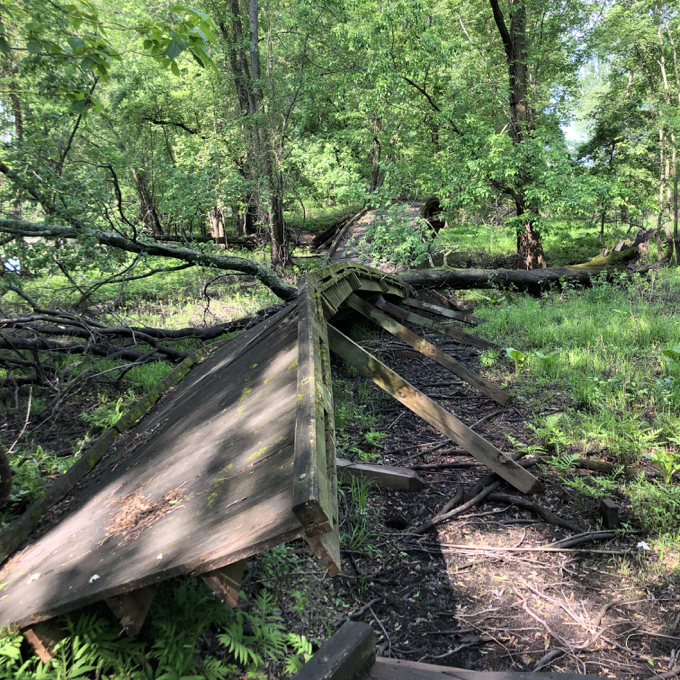 I had made it to a section of the Town Hall trail that very few get to. Perhaps that’s why I was able to commune with nature. A few deer just stared at me (as they should) wondering what the heck I was doing in the ONE place in East Hartford that no one ventures. 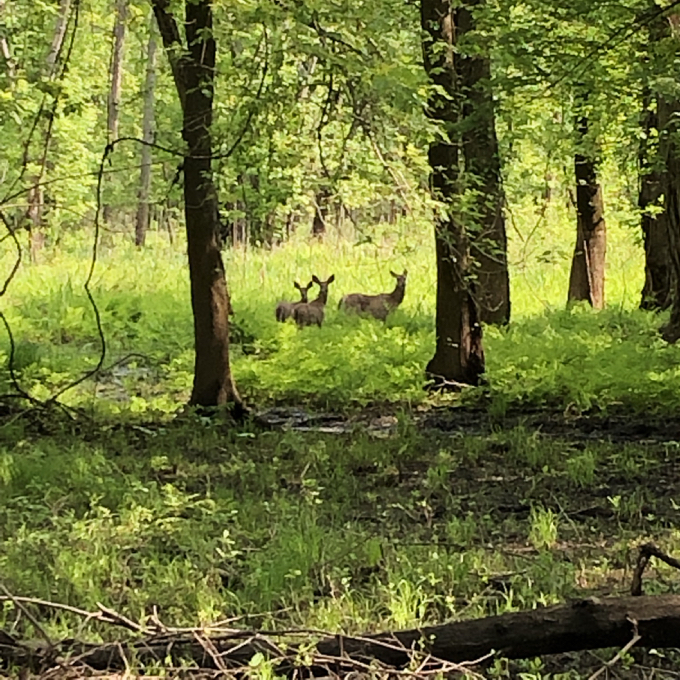 The somewhat ironic thing is that there are two “observation platforms” that spur off the main boardwalk trail. I guess they had an extra ton or two of wood to use or something. (Now I’m wondering how they carted all this wood out here to build this monstrosity… but I guess they simply built as they went.) 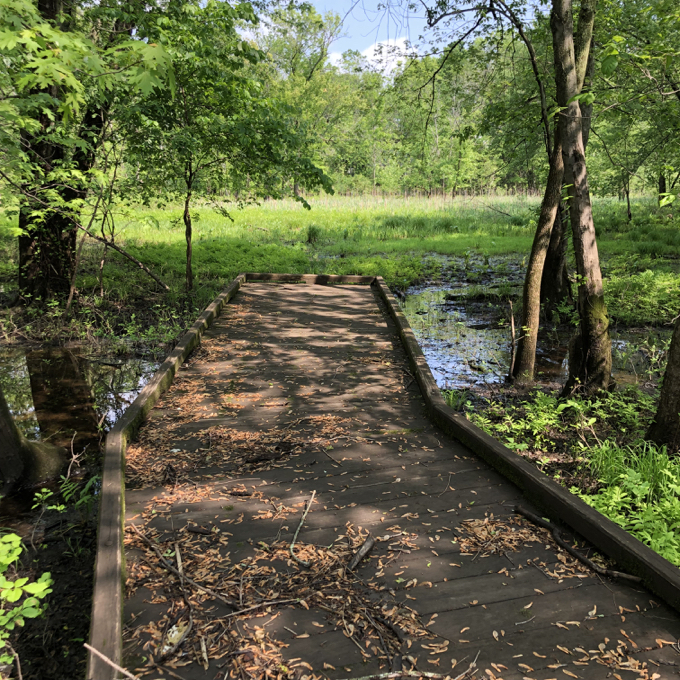 The “observation platforms” take in… a marsh and the so-called East Hartford Lake. If you look closely at this picture below, there was/is a plan to continue building outward, as the support beams have been driven into the marsh. 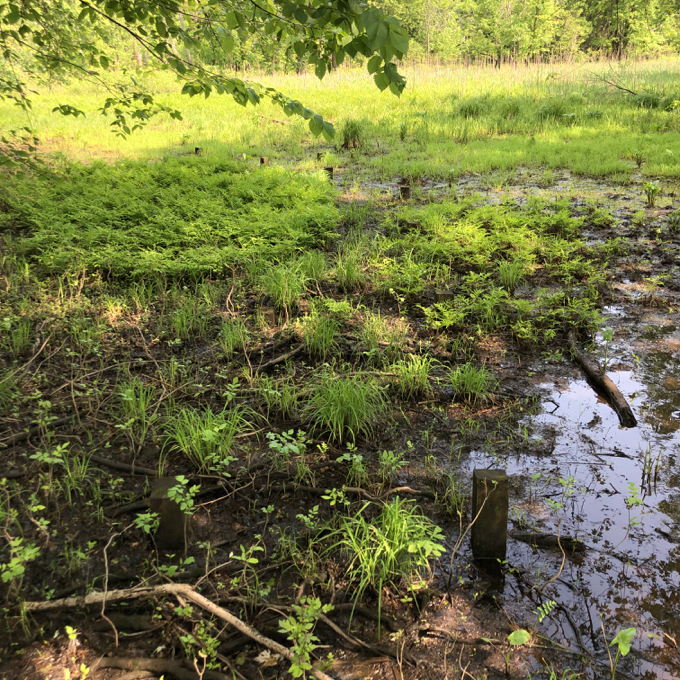 Back to the main trail and let’s check out the other spur “overlook”: 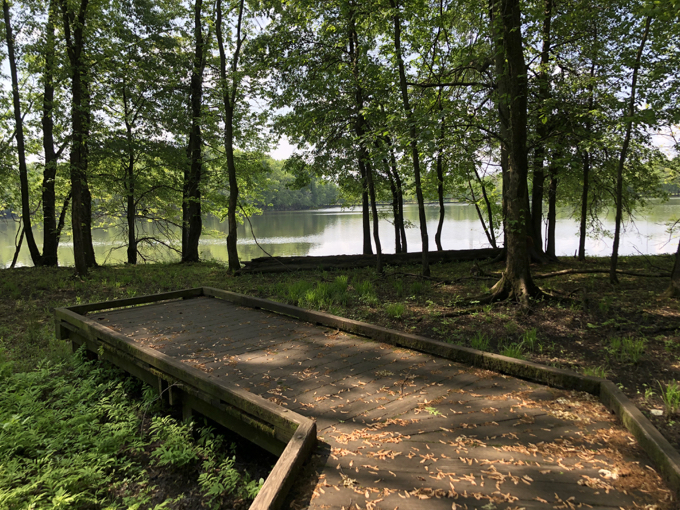 Nice. Back to the trail, heading north. At this rate it’ll take me a year to hit Manchester. It’s all just so fascinating to me. The boardwalk angled left, it angled right, the craftsmanship of each slight turn impressed me each time. These guys really knew what they were doing when they built this massive structure in a swamp in New England, exposed to the elements year-round, year after year.

Having already seen what could go wrong a few minutes back, I was sure lightning wouldn’t strike twice, and – 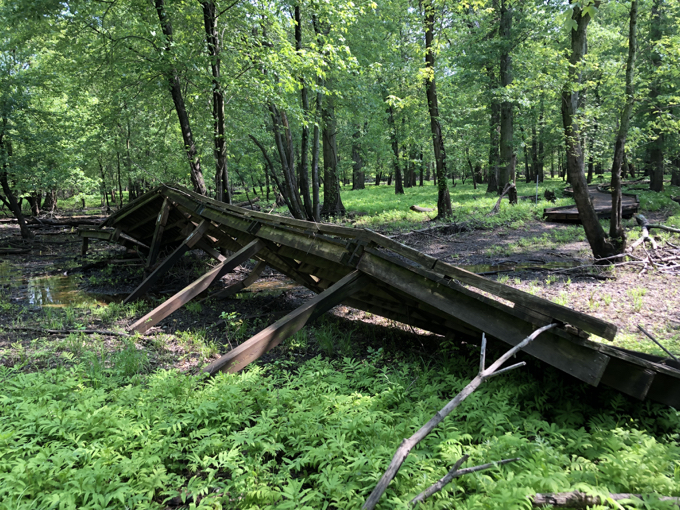 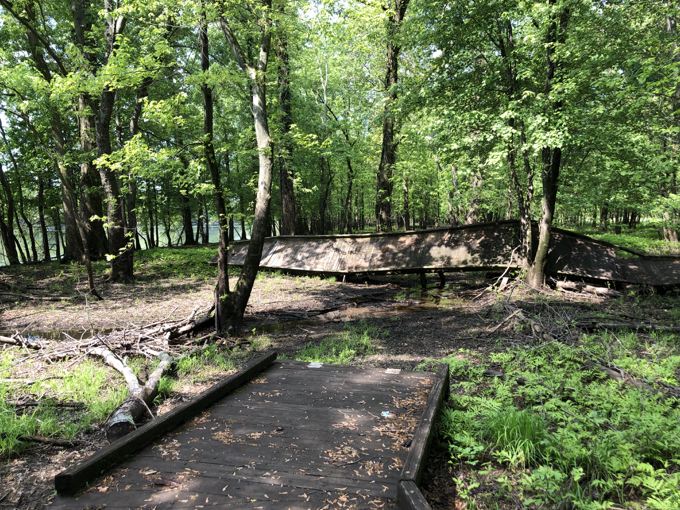 Hm. This Ninja Warrior obstacle was a bit tougher than the last. Deeper water for sure. Still, I had to go for it. I’ve dealt with tougher things in my life, right? It was a bright sunshiney day, so what would it matter if I got muddy and wet?

And look, someone or something conveniently put a slippery tree at the most beneficial spot. 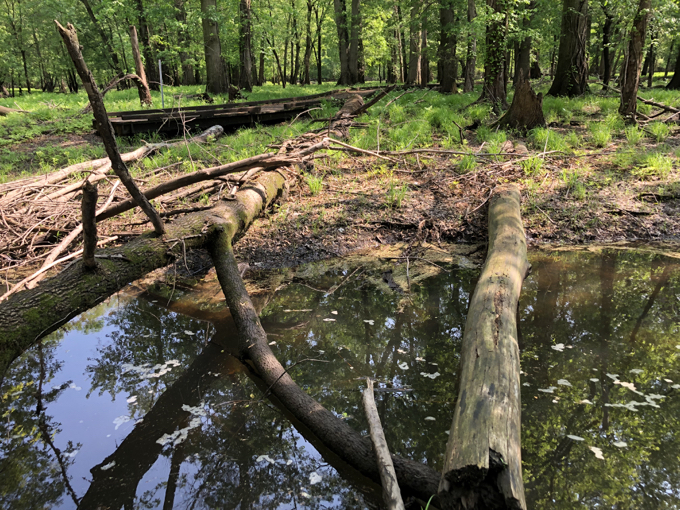 I went for it. And I made it. The Hock deserves my utmost efforts and I was happy to provide. From that point until the end of the Town Hall section, there were no more major issues. Oh sure, there were more sections as slippery as the slipperiest ice you’ve ever slipped on: 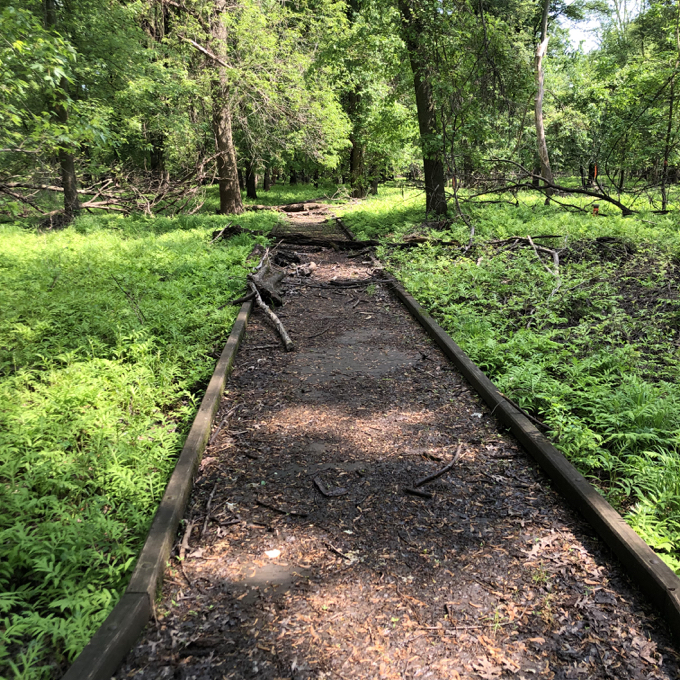 (I know that doesn’t look treacherous, but believe me, it was.) But for the most part, the last bits north were just more incredible carpentry and engineering. Like, what made them decide this little stream crossing needed a massive handrail? 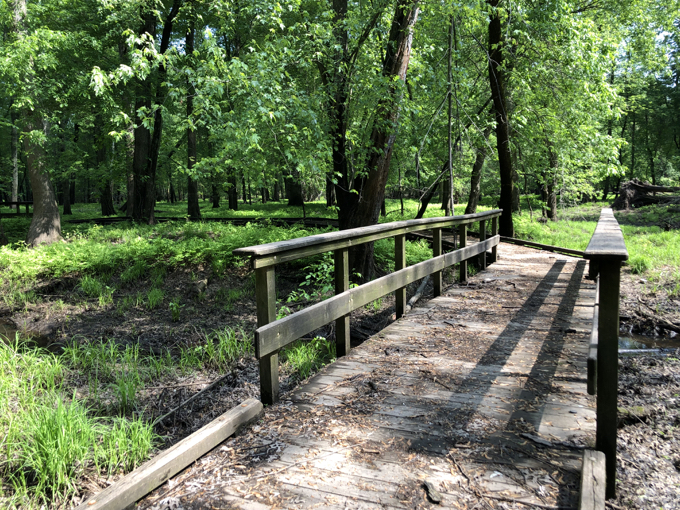 I’ve no idea. The trail ended with actual trail. Dirt. It almost felt weird after the last 20 minutes. The Town Hall Trail becomes the Elm Street Trail in the middle of the woods at which point an access trail links up with a huge hiker’s lot. Oh, and there’s also a sign coming from this direction that probably should be heeded: 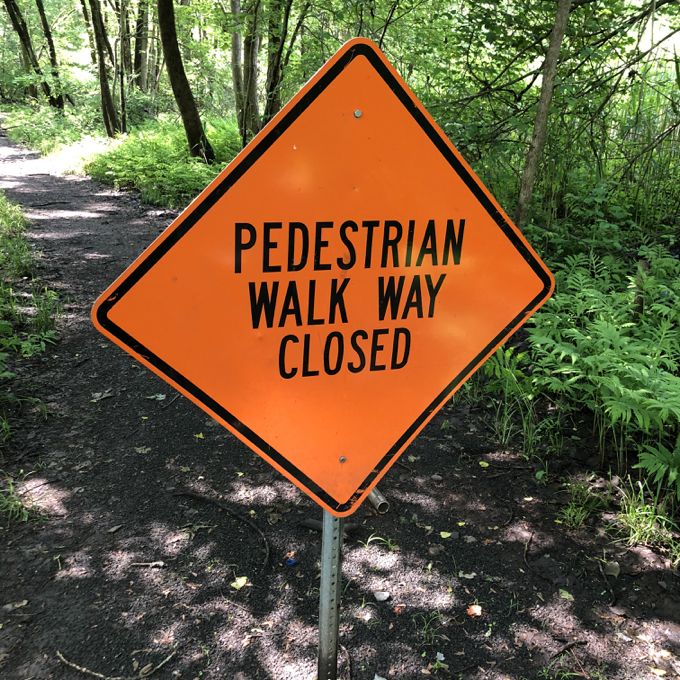 I want to reiterate my earlier point about the failed trail here. It sucks, sure, but there’s really nothing anyone can do about it on an annual basis. A ton of work went into this half-mile – and keep in mind we have many more HRT miles to go! – so I give them a pass. It was hikeable, and that’s really all that matters to me.

I can’t imagine what was in store for me next… 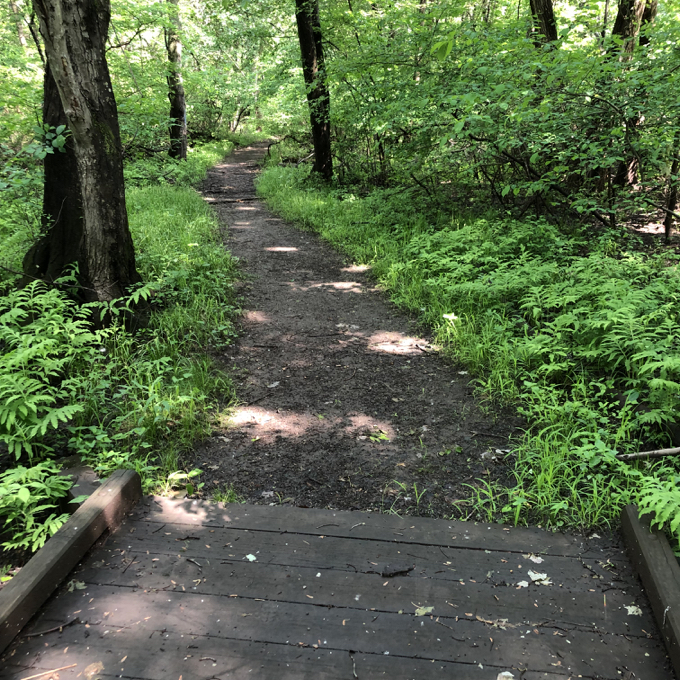 a rare dirt stretch on the Town Hall Trail

Here’s a video of a cyclist riding about half of this section.
Official Town Hall Trail Description

Continue on to Section 3, Elm Street. 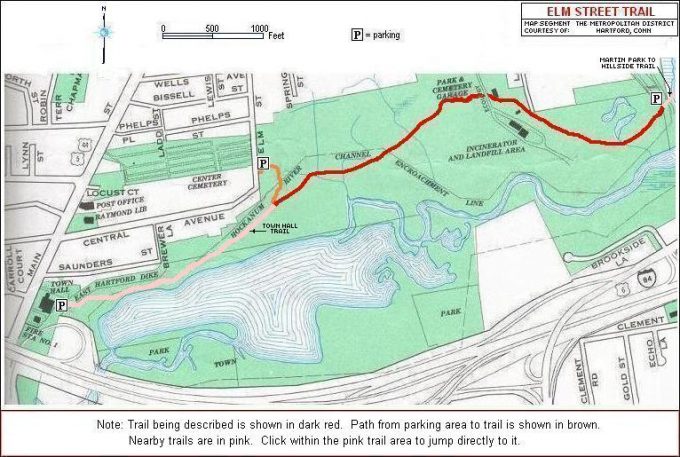